It seems odd, given the current economic climate, to be talking about the most expensive Porsche 911 ever made: this limited-edition Sport Classic version of the iconic sports car is on sale now for £214,200. The number needs rolling around in your mouth and easing into your brain. Over £200,000 for a 911.

Still, if anyone knows the value of its cars and the willingness of customers to pay for them, it’s Porsche. Not for nothing is this the brand that can charge £114 for a full-colour Porsche crest on the alloys. Heck, even a 911 Carrera GTS can be specced to £163,000 without too much effort.

Porsche is phenomenally successful in making money. In 2021, the firm made €5.3 billion (£4.5bn) with an operating return on sales of 16.0% - figures that could be skewed by the current supply situation - but even before the existing silly season in new car prices, the Stuttgart manufacturer was making some of the healthiest margins in the automotive industry, regularly targeting 15%.

So here we are, with a £200k-plus special edition: the 911 Sport Classic. This is the second time that badge has appeared, as the first was on a 997-generation 911 back in 2010. That version was a run of just 250 cars, whereas this car is one of 1250 worldwide. (There’s no set number for the UK allocation in order to stop speculators, apparently. Reading between the lines, it doesn’t sound like it’s yet sold out, unlike the last one, which was entirely snapped up before anyone even got to drive it.)

It’ll be interesting to see how the sales pan out. You get the feeling that Porsche needed to up the volumes on this car to justify all the extra engineering that went into it (more on that shortly) but the firm itself admits that prices of the last Sport Classic (limited to 250 units, remember) softened after launch and only came back in time. 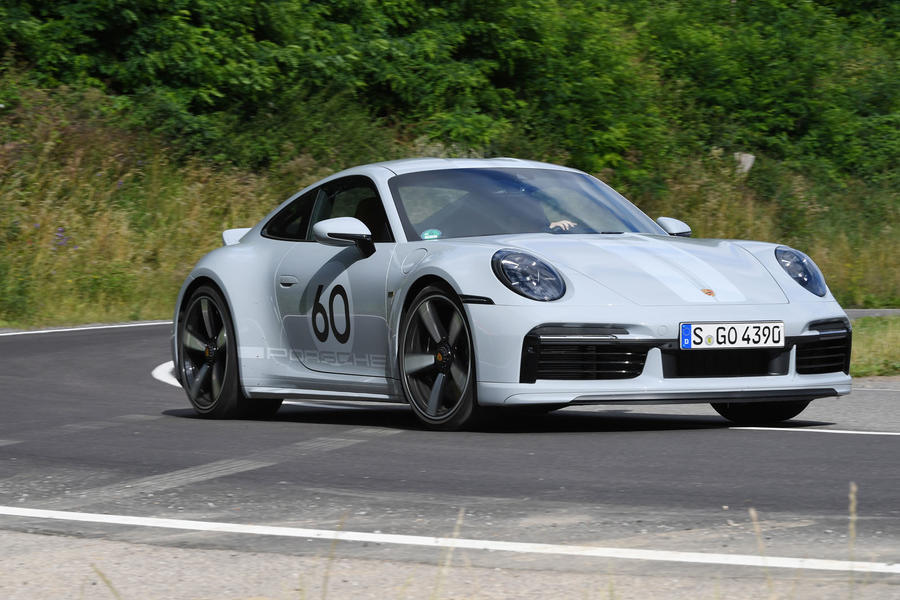 This is also the second of two Heritage Design projects. The first was the 911 Targa that was released last year, a car that nodded to the 1950s and 1960s road racers that made Porsche famous, as well as the 356 and early 911. This one is slightly later, trying to ape the 1960s and 1970s, with the clearest link being to the 1973 2.7 Carrera RS and its famous ducktail rear spoiler (see separate story, below).

Porsche hasn’t revealed what the next two cars will be, but it’s a safe bet that they will continue on that chronological path. A Rothmans 959 for the modern era? Yes, please.

Further influences from the past with this Sport Classic include the Fuchs alloys, the pinstripe down the middle (painted this time, not stickers), roundels on the doors (thankfully deletable), the houndstooth cloth inserts on the seats, the ‘double-bubble’ roof and even the rev counter, which has a lovely green element to it, aping the rev counter on the 550A from the 1950s.

The bonnet and roof are carbonfibre, while the brown leather in our test car is a special aniline version with a much softer texture (and you really can feel the difference: it’s more malleable to the touch). Carbon-ceramic brakes are standard and save a handy 20kg in unsprung mass, while there have also been tweaks to the front and rear bumpers on account of the different aero from the ducktail spoiler.

But – and this is an important part – this is not simply window-dressing. Porsche has gone to some serious effort with the engineering integrity of the Sport Classic, more so than with the Targa Heritage Design, or indeed the last, 997 version. The car has been through more than 750,000 test kilometres (466k-plus miles) and the keen-eyed will have spotted that it lacks the 911 Turbo’s rear wheel arch air intakes, despite the car being a Turbo wide-body. That challenged the engineers, because it meant that all the air intake work needed to be from in front of the ducktail. 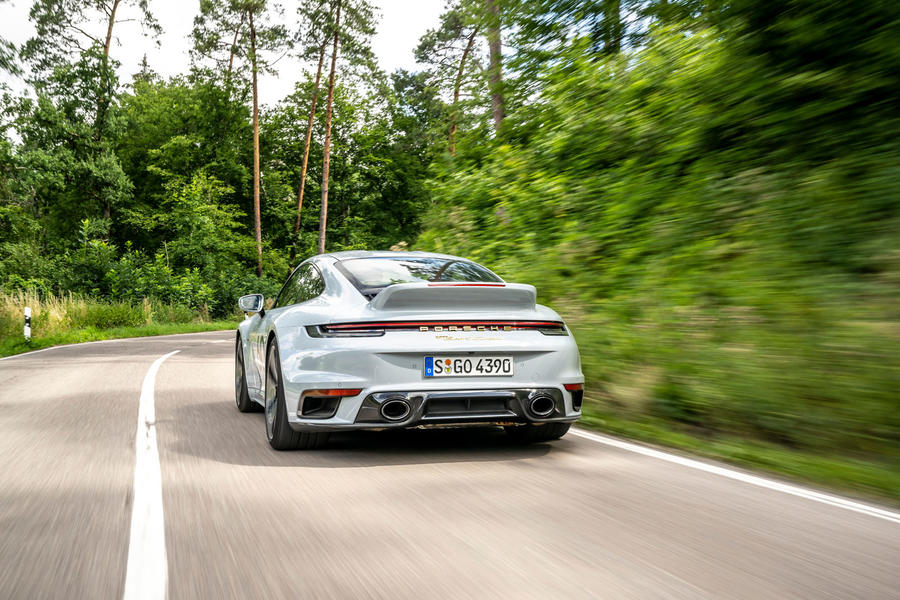 As such, it runs the same biturbo 3.8-litre engine as the 911 Turbo but here are the two kickers: it’s rear-wheel drive and has a manual gearbox, a combination that isn’t available in the regular Turbo models. That makes it the most powerful rear-driven 911.

The engine is the same biturbo lump as that in the 911 Turbo, albeit detuned to 543bhp from 572bhp, and 443lb ft from 551lb ft, on account of the aforementioned gearbox. The 0-62mph sprint takes 4.1sec - the normal Turbo’s extra grunt, traction and PDK drop that to 2.8sec - and the top speed is a monstrous 196mph (again, slightly down on the normal Turbo).

A fuel economy figure is hardly relevant here, but if you must know, the claimed figure is 22.4mpg and we averaged 19.6mpg over a day of not exactly dawdling.

The kerb weight has come down from the Turbo’s 1640kg, on account of losing the front driveshaft, the PDK ’box and other bits such as the carbon bonnet and roof. It’s no Porsche 911 GT3, but at least it’s heading in the right direction.

The interesting thing about all this is where it leaves the Porsche among its peers. An Aston Martin DBS Superleggera could be on your alternatives list, or a Ford Mustang GT500: the former offers a similar performance feel, and the latter is the one to hark back to a bygone era. By slicing the 911 into ever more minuscule sections, Porsche is swimming in a small, but profitable, pond. 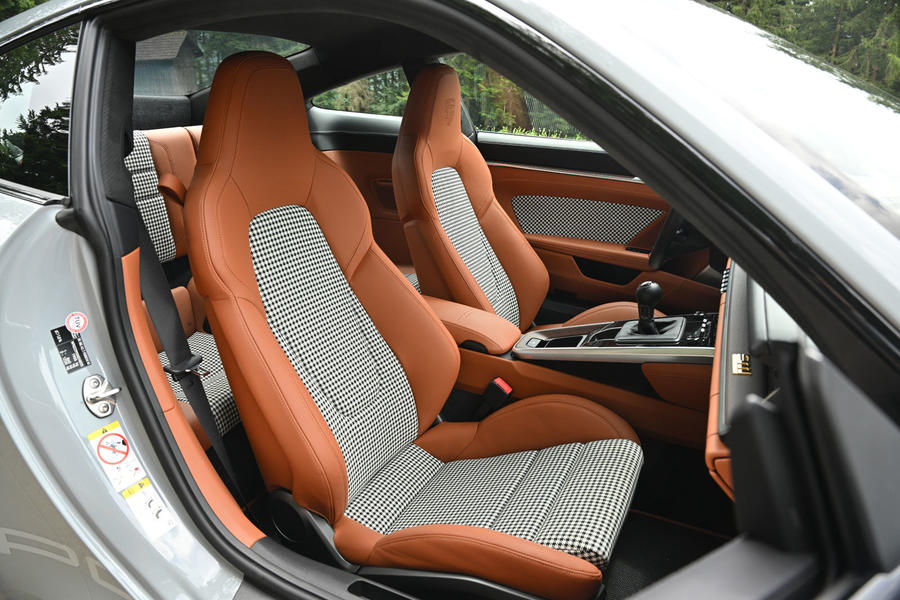 Obviously the most instantly recognisable difference when you drop into the seats is the houndstooth fabric, made from a new material called Pepita. It looks and feels special, despite Porsche rolling it out across a few limited editions.

It’s important, this, because if you’re spending over £200k on a 911, you need reminding at every opportunity as to why. The rest of the interior is largely normal 911, save for some detail bits like leather on the central vents and wood trim across the dashboard, but that’s no criticism. The seating position is spot on and the seats themselves are wonderfully supportive and comfortable.

Twist the ‘key’ to start and then reach across to the stubby gearlever. It’s then that you’re hit with a slight disappointment as you remember it’s the seven-speeder. There is an engineering justification for this - the six-speeder from the GT cars can’t be used because it only works with GT components - but it’s still a let down.

There’s nothing wrong with the gearbox’s action, because it has a neat and precise throw, but cramming seven ratios across the gate means you can’t slide from third to fifth, say, with the same degree of confidence you get in a six-ratio ’box. It’s more of a staccato movement.

That’s one of the few disappointments. As you’d expect with that sort of power, pace is never an issue. From 1750rpm, the power and torque just build relentlessly, pushing on and making a folly of all sorts of laws of physics. There’s minimal let-up even well beyond 100mph (on a derestricted autobahn).

What’s interesting, though, is that it’s not quite as mind-bending as other fast car experiences these days. Maybe we’ve all got too used to electric’s incessant torque, but the 911 Turbo engine, at least in this application, isn’t quite the retina-detacher it once was.

On a hot summer’s day, the grip and traction are such that you can’t tell the car is no longer four-wheel drive. It’s only when you really start to press on, and in tighter bends, that it’s possible to feel a bit more wiggle from the rear end. But you’d still have to be going some to get the rear 315/30 ZR21 Pirelli P Zero tyres to come unstuck.

But that little bit of movement at the back is crucial, because it makes the Sport Classic a bit more playful than the regular Turbo. That car just monsters everything in its path, but the Sport Classic has a bit more finesse to it. The lower unsprung weight helps, as does the lack of a front driveshaft: it feels just a bit sharper on turn-in.

Equally, the throttle can also act as a second steering wheel. It’s possible to trim the car’s attitude mid-corner by being delicate with the accelerator. Not that this is the razor-sharp experience of a GT car. If you’re expecting it to be that, on account of the rear-wheel drive and RS heritage, you’ll need to head to the GT department itself.

Does any of this matter? In 99% of driving, I’d doubt you’d be able to tell but it’s nice to know that it’s there for that 1%. Otherwise, it’s a supremely capable sports car, much like every other 911. It’s only a boring cliche because it’s true.

Does it justify the price tag? A car is only worth what people will pay for it, and in these times, who knows what that is? But there is engineering integrity to justify the uplift so that this doesn’t feel like a rip-off exercise. But we’re approaching the quarter-of-a-million-pound 911: it’s Porsche’s very own inflationary cause. 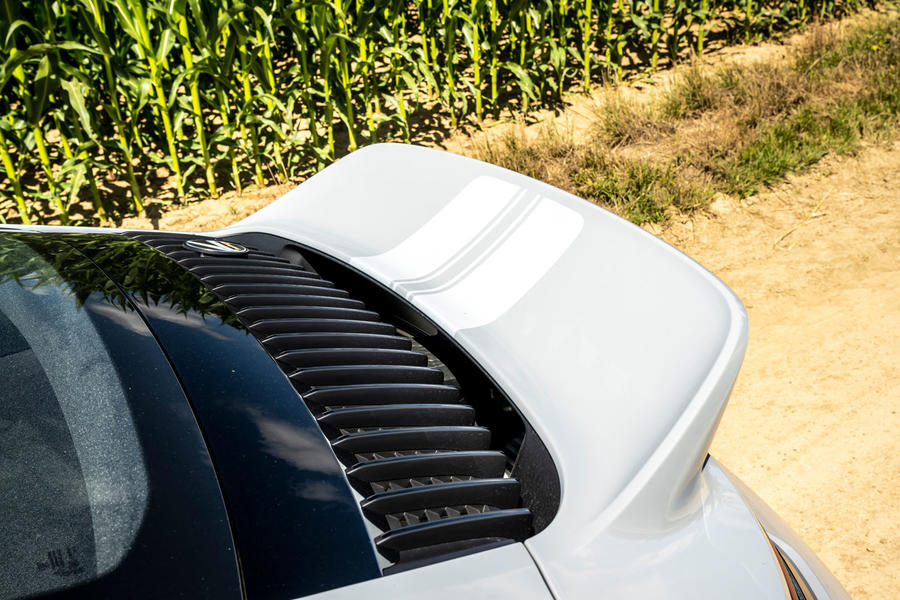 The history behind the ducktail

The ducktail spoiler is a key talking point in the new Sport Classic, but did you ever wonder why the original 1973 911 2.7 Carrera RS got one? The 911’s iconic, but aerodynamically slightly troublesome, teardrop rear end meant that engineers needed to tie the car down more. A sudden step-off shape would be better, with a sharp, 90deg horizontal to vertical engine cover, but because of the coupé shape and rear-engined layout, this wasn’t possible.

As such, it was difficult to separate the air flow. The ducktail spoiler came to the rescue as it reduced lift on the rear axle by causing a break in the air travelling over the back end. It also helped with engine cooling, creating a swirl that meant more wind passed over the air-cooled 2.7-litre flat-six fuel-injected engine.

What’s even more impressive is that it didn’t increase drag: the top speed actually increased by 2.8mph. According to Peter Falk, head of testing at Porsche at the time, Porsche “found that with a taller spoiler, we could increase the top speed due to the decrease in drag. So we kept raising the rear spoiler upward by millimetres with sheet metal at the tear-off edge until we found the reversal point at which the drag increased again.”

So give me a GT3rs any day. And money back. And no more silly manual gearboxes? What next? A return to drum brakes? Manual gearboxes are obsolete! Since last century!

The writer is incorrect in claiming that this boring heritage car is th fastest rear drive 911? That accolade clearly belongs to the GT2? Unless you scan the options on the Manthey site.

That Piers gives this a 4.5 rating highlights how little he knows about 911's or Porsche's in general. At best lazy journalism, more precicely someone clearly out of their depth. Blame his managers for that, not him. No J. K. L. Setright for sure!