From £85,5769
The 992-generation car finally gets three pedals. Is it a better choice than the more commonplace auto?
Open gallery
Close

It’s not the fastest, most expensive or most glamorous version of the 992-generation 911 but this Carrera S, equipped with the firm’s new seven-speed manual gearbox, promises to be the purest.

With its three-pedal layout, two-wheel drive and a very modest reduction in weight, it’s arguably the most driver-focused iteration of the rear-engined machine yet, at least until the GT3 turns up (and there’s no guarantee that will be available with a DIY gearbox this time).

It’s been a year in the making, this car, the overwhelming demand from customers for the PDK dual-clutch gearbox meaning the self-shifting models took precedence. There were even moments when it looked like it might not come at all, given that manual 911s traditionally sell in very small numbers in mainland Europe and the UK. Bizarrely, the fact that it's finally arrived is probably down to an American appetite for manual gearchanging. Across the Atlantic, around 20% of 911 sales are set to be ‘stick-shift’.

Currently available on two- and four-wheel-drive Carrera S models only, the seven-speed transmission is around 35kg lighter than the eight-speed PDK. Further enhancing its credentials as the driver’s choice is the standard Sport Chrono Pack, which adds the hydraulic active engine mounts and bespoke Sport setting for the adaptive dampers. (Our car was also fitted with the 10mm drop in ride height, a £665 extra.) Elsewhere, the PDK car’s electronic limited-slip differential is ditched in favour of a mechanical locker with Porsche’s torque vectoring set-up.

Opting for a manual gearbox these days usually means you’ll be going slower than if you’d taken two pedals - and the 911 is no exception. The 0-62mph time increases from 3.7sec to 4.2sec - the same as the PDK-equipped Carrera, which at 380bhp is giving away 64bhp to the S. On the plus side, the manual is actually a little more efficient, promising up to 28.0mpg compared with the PDK’s 26.9mpg, and CO2 emissions of 229g/km are a 5g/km improvement.

What hasn’t fallen is the price: the seven-speed manual is now a no-cost option rather than attracting a saving as it did on the old car. Whichever way you look at it, a price of nearly £100k for a fairly ‘basic’ 911 is a tough one to swallow. 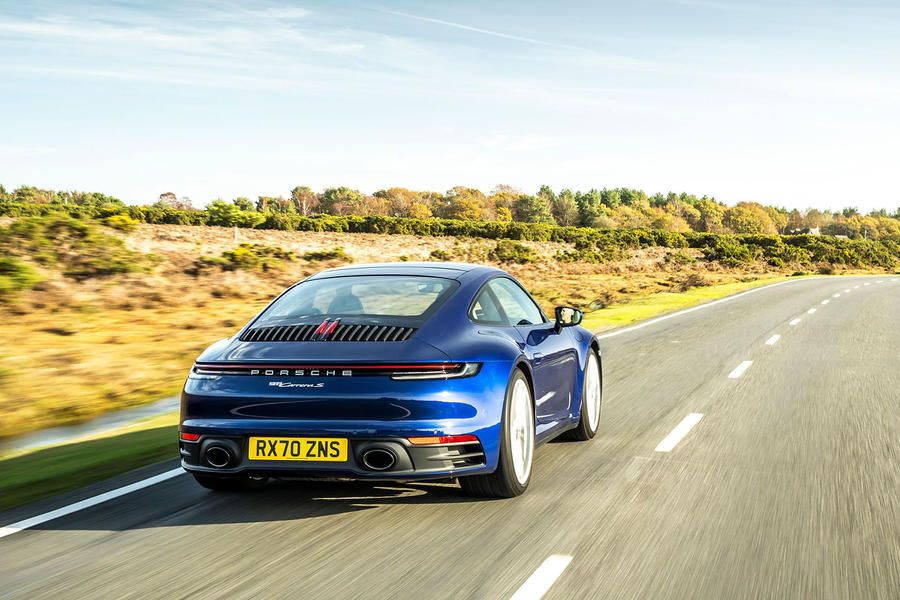 There's something almost incongruous about the appearance of the old-school gearlever in the 992’s high-tech cabin, which is all glossy touch-sensitive buttons and wall-to-wall TFT screens. Sprouting from the transmission tunnel in the place where the PDK’s stubby gear selector is normally placed, it sticks out like a leather-topped sore thumb. Yet reach for it and you’ll find it's placed at just the right height and distance for minimum-effort shifting.

You’ll need to let the gearbox oil warm through first, because when it’s cold, the shift action has a notchy action and the slight feeling of fragility about it. Once up to temperature, though, it’s an absolute delight. The lever’s short throw and precise action allow you to slice through the first six ratios using little more than fingertip pressure. Seventh is still out on a limb, but it’s easier to engage than before and delivers a proper overdrive ratio of around 40mph per 1000rpm for seriously relaxed cruising, tyre roar aside.

Even using the clutch is a pleasure. It’s not too heftily weighted, so progress through traffic won’t leave your quadriceps crying in anguish, while its progressive take-up allows you to easily nail smooth upchanges. Another aid to silky shifts is the rev-match system, which accurately marries engine, gearbox and road speeds for perfect downshifts. Of course, the Porsche’s pedals are so well arranged that you’ll be quickly disengaging this kit and breaking out the heel-and-toe technique. And this is where the manual 911 comes to the fore: its ability to draw you into and make you a part of the action is unmatched by any other model in the line-up.

The manual gearbox also lets you really stretch that glorious twin-turbocharged flat six, whose outrageous muscle is often disguised by the PDK’s slick delivery, which always puts you in the right gear at the right time. In the manual, you can be a gear or two higher than ideal and yet there’s always plenty of lag-free urge. Even at 1500rpm, there’s meaningful boost, while by 2000rpm, the 911 is really hauling hard, the familiar hollow bark from the sports exhaust given turbo twist thanks to the compressors’  whistle and wastegate flutter. This is a seriously quick car.

The rest of the car is pure 992, which means it's a 911 in its most polished form. Yes, it’s a little larger than before, but it’s still more compact than most and the excellent visibility means its size never feels intimidating. The steering has beautifully calibrated rate of response and an oily slickness that allows pinpoint placement, while the mid-corner balance is uncanny given that pendulous mass hanging out over the rear axle. Better still, you can feel through your fingertips and buttocks exactly what the car is doing, allowing you to edge up to and over the edge of grip, while the finely honed stability systems give just enough leeway to exploit the limited-slip diff on corner exit for some genuine throttle steer.

Body control with the dampers in Sport is resolute but with enough compliance not to become jarring. Yet it’s often better to slacken them off into Comfort, where you not only benefit from a more cushioned low-speed ride, but the extra body movement also allows you to subtly exaggerate the car’s rear engined layout, with mid-corner lifts of the throttle helping to bring that mass into play as it swings wide a little for a straight exit. These are all very subtle changes and the 911 never feels wayward, but it's a reminder of what makes the Porsche such an immersive and intoxicating driving tool. More important, unlike the Turbo S and track-honed GT models, it's happening at relatively sensible speeds, so you can enjoy more of the thrills more of the time.

And, of course, all the other 911 traits remain present and correct. The interior is beautifully finished and surprisingly practical - those two rear seats are more useful than you might think - plus there’s a decent boot. You can also see out of the car easily and it’s as capable of commuting as it is long-distance cruising. Few sports cars are as usable. 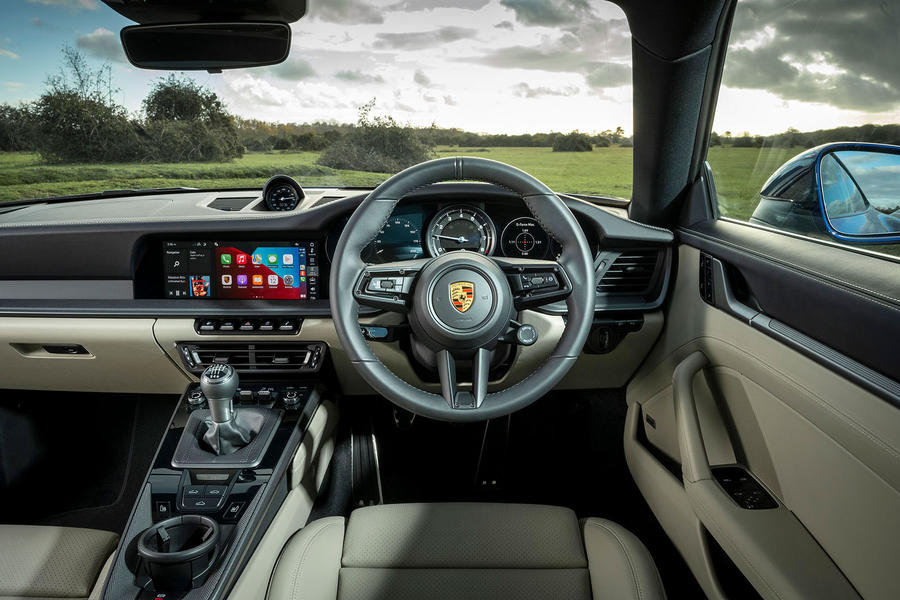 As a driver’s delight, the manual-equipped 911 is arguably the pick of the line-up. The magnificent seven-speed gearbox is a delight to use, and even when you’re ambling, you always feel like you’re a part of the process. Go harder and it draws you even further into the action, making you work for your rewards, but enhancing your level of control and encouraging you to drive better as a result.

Some will baulk at paying so much for a car that’s no faster (on paper at least) than the basic Carrera, but for those who place driving excitement above bar room bragging rights, this Carrera S takes some beating. If you’re tempted to take the plunge, then do it now while you still can. Increasing emissions regulations and hybridisation mean the manual gearbox’s days are likely numbered, and there’s a sense that this 992 could be the last of its kind. 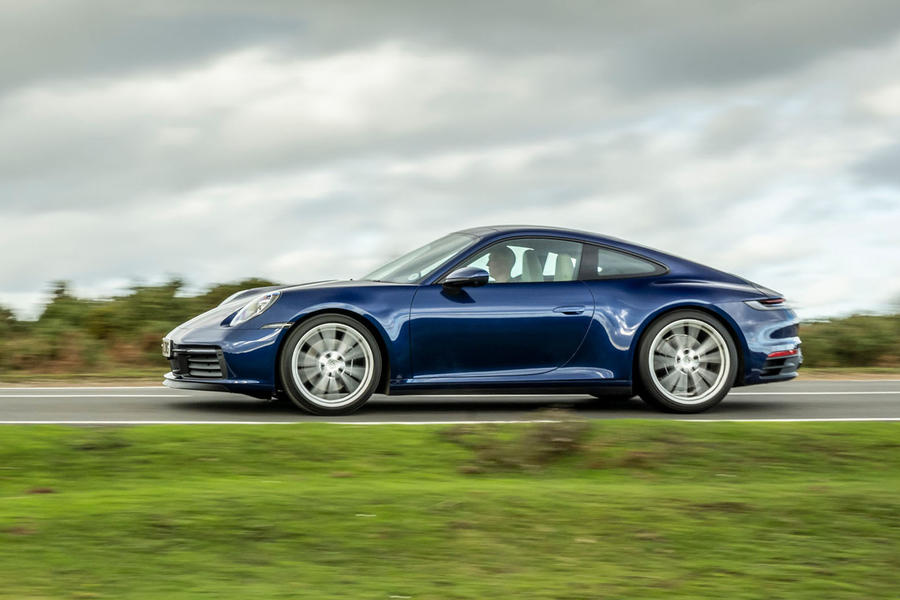 If it's purists they're aiming at, surely the manual should also be available on the basic Carrera rather than just the S? Traditionally the basic manual Carrera is usually a/the sweet spot of the 911 range.

It's my main reason for visiting this site.

There's a reason the PDK is by far the more common choice and that is it is more useable on the road and everyday by far. The only place the manual is better is on a track.

Having said that, I am glad it is at least an option for those who prefer it.