From £85,5768
Four-wheel drive makes the new 911 Cabriolet one of the most versatile sports cars you can buy – but should you?
Open gallery
Close

For now, the Carrera 4S Cabriolet is the most expensive version of the new '992'-generation Porsche 911.

Interestingly, it’s not the most expensive open-air 911 that can currently be bought from new. Porsche launched the latest 911 Speedster earlier this year, and although it’s built upon the old 991-generation underpinnings, it’s still on sale.

Whether the £108,000 4S Cabriolet represents better or worse value for money than the £207,000, GT3-engined Speedster is an interesting debate. Perhaps we’ll have a better idea what the outcome would be in a moment.

In this instance, your money buys a 3.0-litre twin-turbocharged flat six whose 444bhp and 391lb ft are distributed to both axles by an electronically controlled (and newly water-cooled) multi-plate clutch. The system defaults to a heavily rear-biased setting but is constantly shifting the division of torque to maximise traction.

On the subject of traction, the new 911 is also able to sense when the road is wet via splash-detecting microphones in the front wheel arches (the technology for rain-sensing wipers can only detect when it's actually raining) and will recommend you adjust the ESP setting accordingly. For extra anorak points (sorry), this is actually a system that Porsche had developed to 'functional maturity' as far back as the mid-1990s.

Moving on. Mounted to the engine is Porsche’s eight-speed dual-clutch PDK gearbox, which can be either left unattended or operated with a pair of slim metal paddle shifters mounted to the steering wheel. A seven-speed manual will come in due course. Meanwhile, electronically controlled adaptive dampers are standard issue.

Our test car is also fitted with a sports exhaust, the Sport Chrono package (which includes the little mode-swapping rotary dial between the steering wheel's spokes), Active Suspension Management (for a 10mm drop in ride height) and matrix LED headlights, all of which help to take the cost to £120,998. Opting for four-wheel steering, active anti-roll bars and carbon-ceramic brakes would push the price higher still. 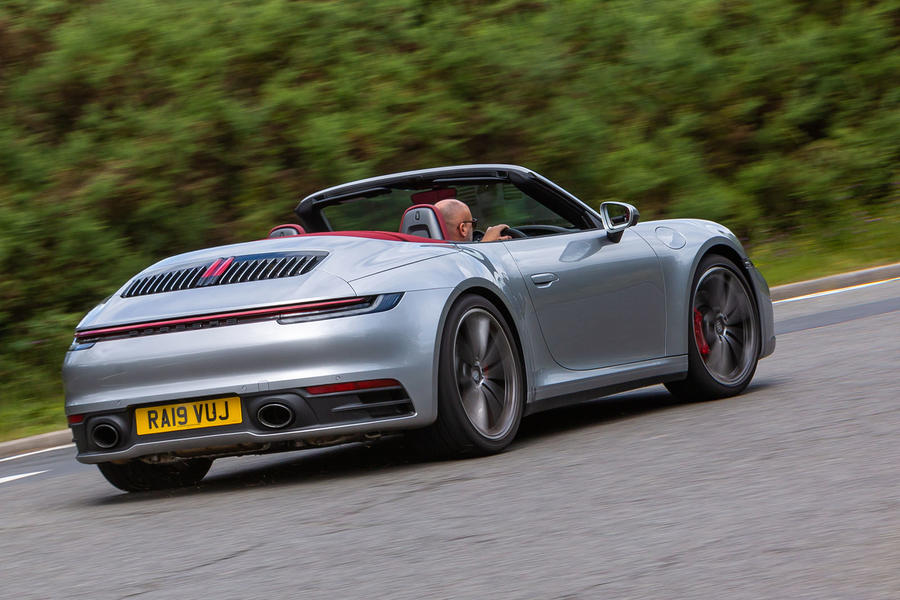 So what do you sacrifice by opting for the canvas-roofed cabriolet?

Aesthetically speaking, less than ever. The awkwardness of drop-top 911s seemed to peak with the post-millennium 996-gen and 977-gen models, whose hunchback silhouettes were never pretty. Thanks to its broad roof panels (think of an armadillo), the new car’s form is almost indistinguishable from the coupé's and the rear screen is both large and made of glass.

Naturally, you lose a little rigidity, and along with the hydraulic roof mechanism, the additional bracing required means you gain around 70kg compared with the coupé. At 1635kg, you might argue that a PDK-equipped convertible 4S is heavier than any 911 has a right to be and we'd agree. You also lose the ability to hit 190mph, although we'd wager travelling flat out at 188mph with wind hurtling around the cabin offers a greater thrill. Indeed, the cabriolet will hit that top speed whether you have the roof up or down.

Putting it down takes almost no time at all: 15sec, via a rocker switch on the centre console, and at vehicle speeds of up to 30mph. Neatly, you can also raise the rear wind-stop electronically, and with it in place, the cabin is largely free from buffeting, even at motorway speeds, and you needn't raise your voice to hold a conversation. In the world of the convertible 911 buyer, that will count for quite a lot.

This being a rear-engined car, when stowed away, the roof doesn't eat away at luggage space, although the tin-top 911 has less on offer than a Ferrari Portofino or Aston Martin Vantage at the outset. However, between the rear seats and the deep recess beneath the aluminium bonnet, you should manage to get easily enough packed in for the oft-cited 'weekend away'.

Practicalities aside, the 4S cab is phenomenally capable. Not so much does it shrink the customary dynamic disparity between open- and fixed-roof 911s as slam it shut to an almost watertight degree.

The extra weight robs it of a whisker of straight-line performance – merely 0.2sec on the way to 62mph – but the wide-hipped, big-bottomed body is so well controlled that apex speed is pretty much identical to the coupé's. Anybody attempting to hunt down the last vestiges of scuttle-shake on anything other than an appalling road surface will also do so in vain.

In fact, I think anybody who drove the very first 911 cabriolet, introduced in 1982, and its coupé contemporary would be astonished at the parity Porsche has achieved with its latest attempt. There's never any question that the 4S cabriolet is going to corner with anything less than phenomenal grip and traction, and in terms of steering response, its temperament feels like a blueprint of that from the coupé.

If there is any criticism to the made, it's one that applies to all of the new-generation 911s: they take themselves too seriously. In days gone by, you wouldn't necessarily grab a 911 cabriolet by the scruff, but with this one, you can and so it's disappointing that it never falls naturally into oversteer or asks very much of its driver, at least at public-road speeds. Equally, if all you want is total security, step this way. 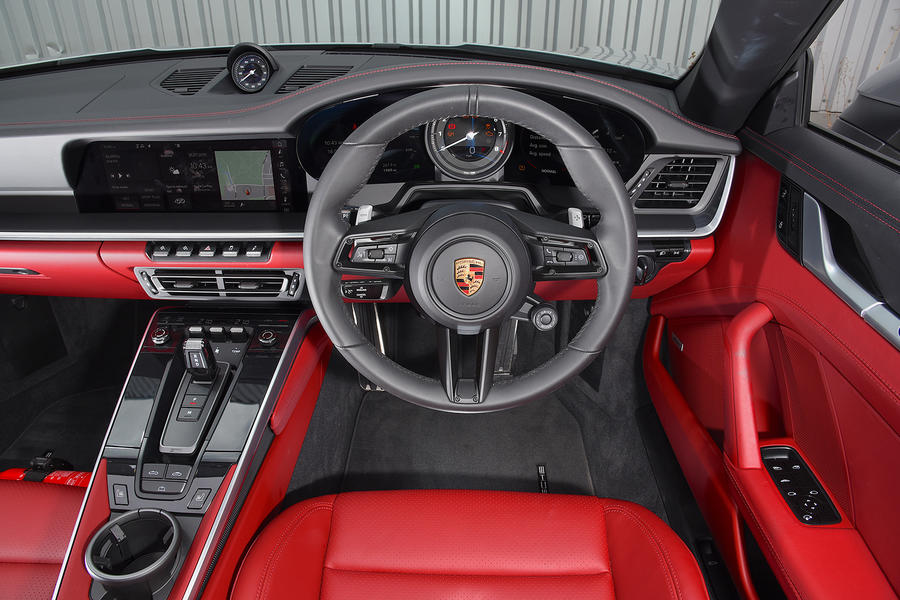 Possibly not, although it depends on what you want from your convertible Porsche. And if that sounds like a cop-out, let me explain.

Our test car was formidably capable on the attack, although on its 10mm-lower suspension and 20/21in wheels, the low-speed ride became almost brutal at times. That's hardly conducive to the easy-going, sun-soaked progress that most people will want from such a car, is it?

For those people, it may be worth waiting for the non-S cabriolet, on smaller wheels and possibly in rear-drive form. It will soak up the road more easily, steer more sweetly and ride more quietly, and if you're not pushing the car's limits, you won't miss the tractive benefits of having front driveshafts.

Equally, if you do want a four-wheel-drive 911 and intend to drive the wheels off it, there's now barely any penalty for going topless. 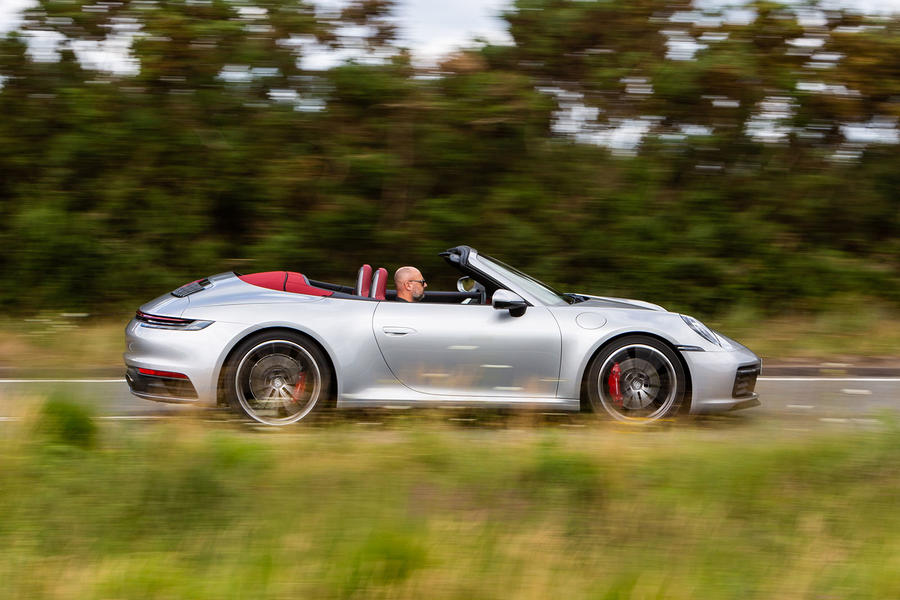 Looks like a pastiche. Also could it be these days the 911 feels like it is taking it's design cues from a Cayenne SUV rather than the other way round.

Looks like a pastiche. Also could it be these days the 911 feels like it is taking it's design cues from a Cayenne SUV rather than the other way round.

Porsche should reintroduce the Targa. A real Targa like the old one with a fixed rear window, a with only a manually removable roof panel like the Corvette.