By now you’ll have read Andrew Frankel’s full back story and an early track test of the new 992-generation Porsche 911; or if you haven’t, you’ll find it here.

In short, though, the eighth-generation 911, is, well, a 911, with the same wheelbase as the outgoing 991 and a 3.0-litre twin-turbocharged flat six again.

But otherwise it’s quite different. With so little steel in its body, it’s now officially an aluminium monocoque, as Porsche tries to offset the weight of new technology and crash protection it has brought with it. Among other things, there are bigger turbos, more efficient intercoolers, piezoelectric injectors and uneven intake valve opening distances, so that in the Carrera S form in which it’s launched, the new 911 makes 444bhp.

It can be had in two- or four-wheel drive, with both versions having the same width (2WD Carreras used to be narrower). The front track of both cars is up by 46mm, with the rear track on the 2WD S up by 39mm, now that it’s the same as the 4WD car. Tyres are massive: 245-section fronts, 305-section rears, on 20in and 21in wheels respectively, as the standard 911 adopts different-sized front and rear wheels for the first time, like GT 911s already have.

And now we’ve driven it on the road, for a reasonable stint, and in both 2S and 4S specification. First, though, came a few laps of a race circuit just in the 4S, where the 911 proved itself to be just as compelling as in our earlier test. The new 992 is a ridiculously fast and, in 4WD form, incredibly stable 911, with the kind of integrity to its feel that suggests you could lap one for hours and its only complaint would be when it ran out of fuel.

It’s the kind of feel that can make a car feel over-specified for the road. See also: most modern sports cars. The trick is to get something so fast, so capable, and which only gets better as you go faster, to feel engaging when you go slower; as you must in a modern 911. Consider that if today you drove a first-generation 911 as fast as it could possibly go on the road, the speed would probably still raise a passer-by’s eyebrow. Porsche had just such a 1963 car on display on the 992 launch. It has only 130bhp and wears 165-section tyres on 15in wheels. Gosh, it looked lovely. A 992 would be out of its sight before it was out of first gear. 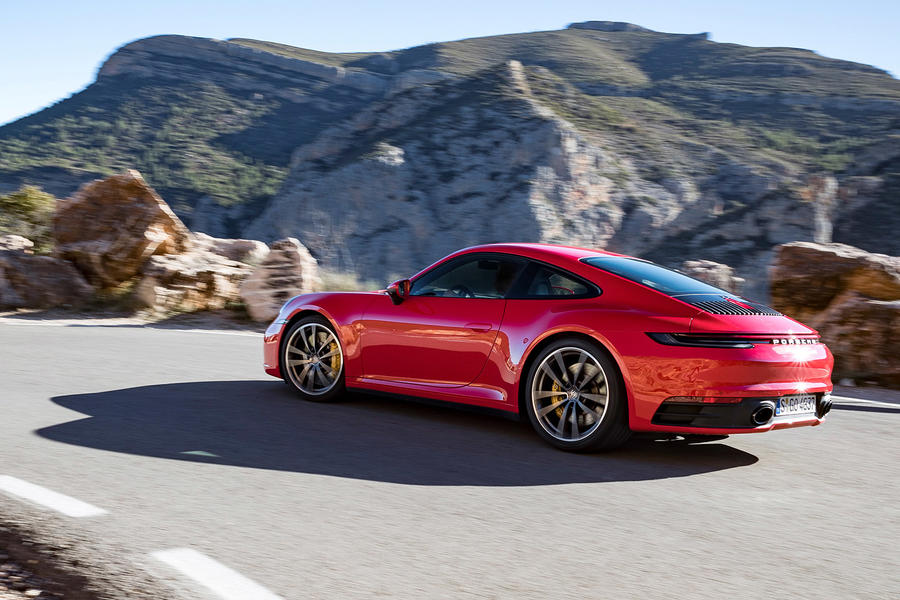 A 992 at sensible road speeds, then? You’ll not be testing the engine too much. It still revs to 7500rpm and drives through an eight-speed, rather than seven-speed, PDK (double-clutch) gearbox, impeccably crisply and quickly on up and downshifts. The engine doesn’t sound particularly special from the outside and nor is it brash like an AMG V8, whether in an AMG or an Aston Martin, but it still has an endearing flat-six tone from inside; lifting off on part throttle elicits an engaging, if quiet, wastegate whistle and the odd exhaust burble.

Power delivery is strong: barely discernible lag and a response rate and output that builds pleasingly so that, despite the torque peak of 391lb ft arriving at only 2300rpm, this is still an engine that’s worth revving out. It’s still also one that doesn’t have the whippy responses of a naturally aspirated unit of old, but maybe the time for complaining about that sort of thing has passed, as it has for the adoption of electrically assisted steering, a longer wheelbase, extra weight, water cooling: all of the ‘it’s improved… but’ caveats that have accompanied 911s past.

Electronically controlled dampers are standard. Dynamic engine mounts are standard. Active rear steer is optional, and fitted to our test cars. Body control is good, but so is the ride, especially considering the paucity of its tyre sidewalls and the 10mm suspension drop that comes with an optional sports chassis our test cars were equipped with (there are quite a lot of options, which mean the 992 becomes a £100,000-plus car very easily).

The dynamics are strong whatever drive mode/damper stiffness level you select. The 992 steers pleasingly – that the front end is relatively lightly loaded generally means, I think, that only a modest level of assistance is needed to make the steering light enough, so road feel filters through that bit more easily than on some alternatives. I doubt any rival, barring a McLaren 570, which is notably more expensive, steers quite as well.

The caveat here is that the 4S is, nonetheless, a poorer steer than the 2S. With power going to the front wheels while there’s never anything you’d describe as genuine torque steer, the steering is less honest, less pure, more corrupted than in a Carrera 2S, whose steering is smoother and more consistent. Both cars are quite willing to turn, with the increased track width bringing brilliant confidence to the front end, but there’s a better agility to the 2S’s cornering, too, of the kind you’ll even feel at moderate road speeds. It is some 50kg lighter, after all. And given where the engine is means the 2S doesn’t exactly struggle for traction, yet is more adjustable and fun, means that I can’t think of many places you’d pick the 4WD car over it.

Additionally, there’s a ‘wet mode’ that you’ll hear a lot about. The car works out whether it’s raining cleverly – via ultrasonic sensors in the front wheel arch, to hear road spray – but the drive mode it then suggests you place the car into is mostly comprised of a careful traction control system that, in the 4WD car, also increases the proportion of power it puts to the front. Or you can ignore its suggestion. 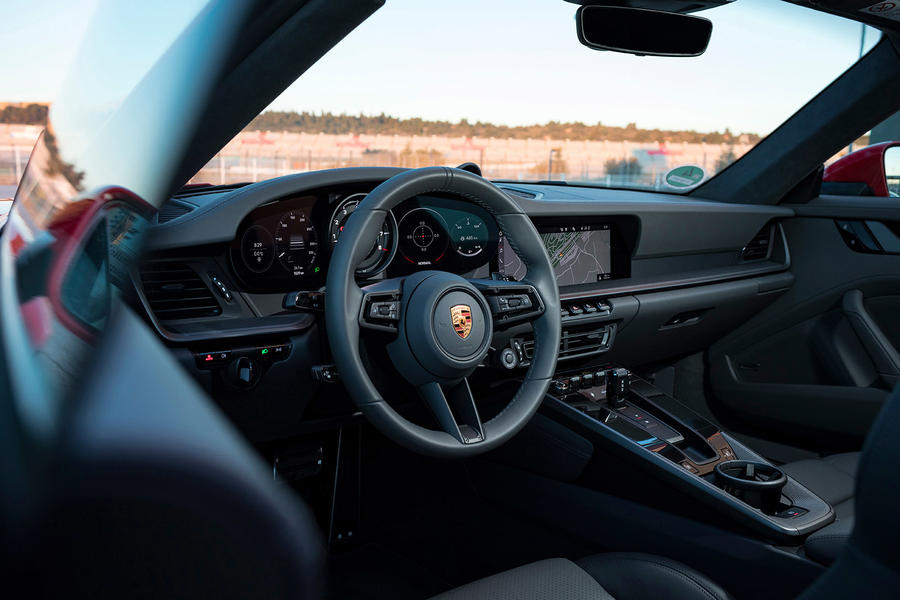 Either way, the 992 is an engaging, entertaining road car.

Is it exciting? Not overtly, at least not compared with the flamboyance of, say, an Aston Vantage, AMG GT or Audi R8, perhaps even a Lotus Evora, but the Porsche’s advantage over any of them, and why it outsells anything else remotely like it, is how easily it fits into your life, how discreetly and painlessly it can be used as a daily driver. I’d still prefer it if there was a narrow body, because the ease with which you can place a 911 on the road has always been one of its abiding positives.

That aside, though, this is a Porsche that will, I’m pretty confident, slip into the top of the class when we finally get it onto roads we know against rivals we like. It’s an outstanding all-round sports car. And for the first time in recent memory: with no buts. 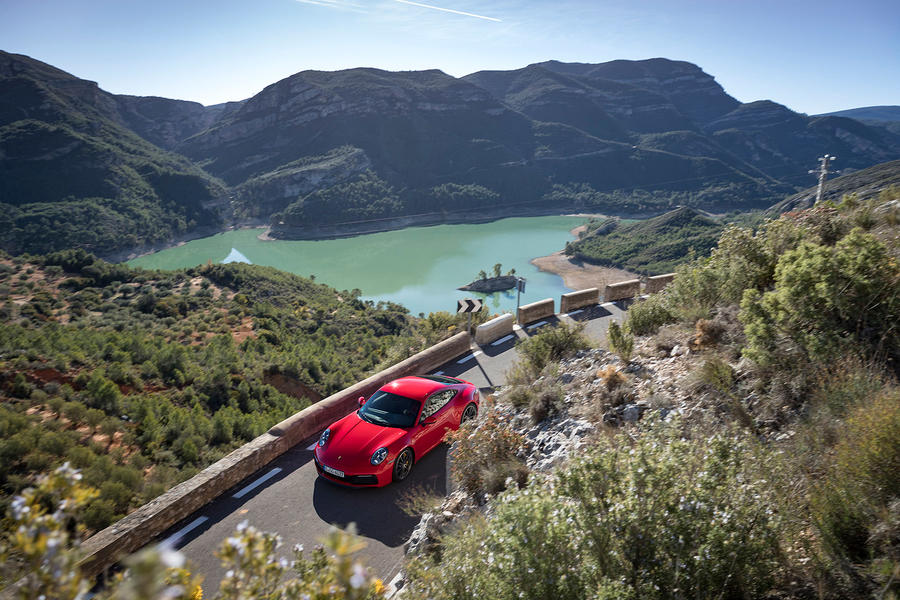 The prices have increased substantially.

Carrera is now so expensive that these "basic" models are truly "rich man's cars" now.

I never used to be a fan of

I never used to be a fan of Porsche's until I went in a 911 GT3 at a charity supercar day two years ago. The following year I was taken around in a 458 Speciale and I have to say the GT3 actually felt overall the best car. Sure, the Ferrari was quicker in the straights due to having 100bhp more, but as an overall package, and the superb body control and handling of the GT3, it just sneaked ahead of the Speciale for me. Fantastic cars. I have been converted. And I won't even go into the familiarisation laps I had recently in a Cayenne at the race circuit in Vegas ahead of driving a supercar....what the pundits say is true. Absolutely no idea how it cornered like it did for a 4x4!

No it's never time to stop complaining about throttle response and steering feel!  Those qualities are precisely what make a sports car entertaining at legal speeds.  Ditto manual gears.  It's inconsistent to roll over on these points, as Matt does, and then praise the 2S for being a better handler at moderate speeds than the 4S.  I suppose Porsche are just waiting till my generation die off and all that's left are people who think violent acceleration for 200 yards in a straight line is what defines a sports car.  Being over 6ft 7in wide with the mirrors open (as driven) doesn't help.