Four years ago Porsche created a new 'Touring Package' for the 911 GT3, and in doing so gave us one of the most covetable performance cars of all time.

Like so many good ideas, it was very simple. They took the 911 GT3, with its jewel of an engine, manual gearbox and beautifully honed chassis, then swapped the rear wing for the low-key extending deck from the 911 Carrera, and ditched the cabin's racey Alcantara in favour of smooth leather.

The result was an exceptionally special machine disguised as only a moderately special one. And you only have to look at the number of debadged RS6 Avants around to know that people like that sort of thing. More importantly, the reason this subtler, more charming alter ego worked so well for the GT3 was because the 991-series car was very much at home on the road in the first place. To many, the 991 GT3 Touring was – and still is – peak modern Porsche 911.

It's therefore no surprise that the GT3 Touring is now back, this time earlier in the model cycle because Porsche knows the demand exists, and with optional PDK (previously it was manual only). And once again, simply the sight of this car gets the blood pumping, not least because while the elegant silhouette is regular 992-series 911, only set lower to the road, the details are plain devilish.

The shotgun exhaust, the wide rear diffuser, the nostrils in the carbonfibre bonnet, the scalloped rear bumper and even the staggered, centre-locking alloy wheels are all pure GT3, as is the aggressively profiled front bumper – although you might not notice that, because on the Touring it’s painted the colour of the body, rather than being black plastic. There's also matt-finish chicken-wire all over the place, but quite apart from looking cheap, it serves to give the Touring an appealingly illicit, almost skunkworks-y vibe.

So even in the black of our LHD test car, the 992 GT3 Touring is considerably less understated than the old 991, and the low-slung, carbonfibre-shelled seats don’t do much to quell the sense of occasion when you slide aboard. Porsche's 'Sport seat Plus' is the standard option, but when you're already spending £128,000, one imagines it's hard to resist dropping an extra £3790 for the more attractive, comfortable and supportive buckets that debuted in the 918 Spyder.

The mechanical specification is regular GT3, with the only major differences being the absence of the large rear wing, with its swan-neck stanchions, and the fact you cannot order the Touring in Clubsport spec (would anybody really want to?), so there's no option of having a half roll-cage behind the seats.

It means you get the GT3-unique 3996cc flat-six, which is technically naturally aspirated but, in practice, uses extra throttle-bodies and manipulates pulses into the intake tract to achieve some level of forced induction. It spins to 9000rpm, meaning among 911s only the racecars rev higher, and it develops 503bhp at 8400rpm and 347lb ft at 6100rpm. The resulting specific output of 126bhp per litre matches that of the upcoming Ferrari 812 Competizione.

Downstream of the engine sits either a dual-clutch seven-speed PDK gearbox or Porsche's 17kg-lighter six-speed manual, paired with a locking differential that works alongside the car's brake-based torque vectoring. Carbon-ceramics brakes are standard, as are the sizeable forged wheels: 21in at the back and an inch smaller at the front, and shod in Michelin Pilot Sport Cup 2 tyres.

This car's wheels are also finished in 'Satin Neodyme' for an extra £842 and look absolutely delicious, filling their arches in a way only Porsche's GT division seems to know how to achieve.

Suspension is then by double wishbones at the front – new for any 911, but standard fare on most mid-engined supercars, as well as more affordable specials such as the Alpine A110 – and multiple links for the self-steering rear. The dampers then have two modes: Sport and Track. 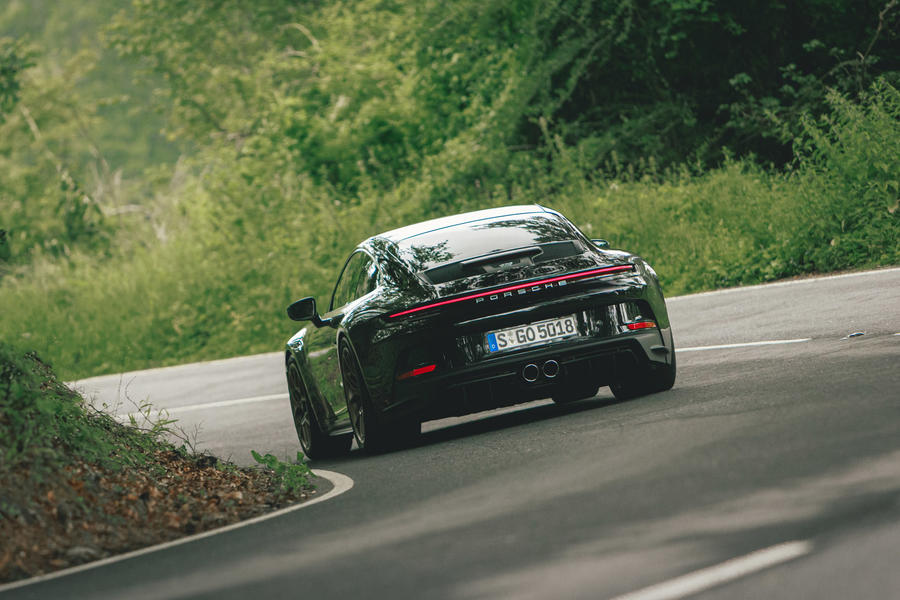 In some ways the Touring's beefier looks are a bellwether for the driving experience, which raises awkward questions over the suitability of the 'Touring' name. This is a more technically capable car than its notably supple forebear, and clearly also one with greater track focus. It already feels halfway to deserving full RS designation, and that comes at a cost.

Miserly rear suspension travel can make the ride unforgiving at everyday speeds; the front’s double wishbones encourage the nose to hunt about on poorer roads; the wider Michelin Cup 2 tyres find copious grip in the dry and lay the ground for fine steering feel but, along with the drumskin suspension, they also generate cacophonous roar; the quickened steering lets you tap into the car’s housefly agility at will but can make progress feel nervous at times; and the larger 992 footprint requires greater alertness from the driver.

And yet, the GT3 Touring just so obviously is a magnificent thing, capable of changing direction so crisply and with such cohesion between its axles that it is genuinely breathtaking. The sense of lightness on the move defies the reasonable but in no way modest 1418kg kerb weight, too. Fluid at speed and with the dampers left in Sport, this chassis also communicates in a manner that means you quickly find a level of confidence you would swear had been years in the making. And the engine – four litres of naturally aspirated, individual throttle-bodied flat six that spins to 9000rpm with joy – is unforgettable.

When people talk about 'addictive' driving experiences, it's generally some sort of Caterham or Lotus or some other memorably raw car they're referring to, but in manual form the GT3 Touring gets to you in much the same way. There's a purity and agility that feels mid-engined, but underneath it reside 911 handling idiosyncrasies, including immense, trustworthy stability at the back axle under power and finely honed front-end throttle-adustability within (rather than beyond) the limits of grip. The GT3 is like a racecar in this sense: you set the heading with the steering, then trim your precise line with the accelerator, and you can enjoy doing this at reasonably sensible speeds.

Few if any rivals do the 'extension of your limbs' thing quite so well, and yet because this is a 992 you also have all the modern amenities you could want. Swapping the Cup 2 tyres for either of the more road-focused tyres that Porsche offers (Pirelli P Zero or Goodyear Eagle F1) would also make the Touring more dependable on colder, wetter days, as well as easier to play with in the window between grip and slip. If you never plan to do any trackdays (though you really should, because this car is made for that kind of thing and excels on circuit), the less serious rubber is worth considering.

I say 'reasonably sensible' in relation to speed, but in truth the use-case for this car's performance level is pretty marginal. The gearing is sensible but the engine possesses so much headroom that redline shifts in second gear mean going to 80mph. That's not a dealbreaker in itself, because even from about 5000rpm this scalpel-sharp flat-six is such a treat, all intake roar overlaid with valvetrain scream, but it's worth noting that you can't extend it without risk. The real problem is that the capability of the chassis encourages speed. You'll see an attractive S-bend up ahead, drop a cog then flow the car through, gently leaning of the outside tyres and squeezing the throttle to release power and glorious noise from the engine. All good, considered fun, you'll think to yourself. But then you'll look down at the dials and read unpublishable figures. It's just that kind of car: too good for the road, in way that the 991, by the skin of its teeth, wasn't.

And then there are those other drawbacks: noise, over-sensitivity, ride-quality. Having driven the GT3 Clubsport the day before this Touring, I can tell you that without a roll-cage the car is less agitated on poor surfaces and less prone to firing strange resonsances and wolf-notes into the cabin, but driving the softer GT3 sibling is still an event whether you’re in the mood or not. Owners will need to accept that. For a car that laps up genuine touring duties yet still has some bite to its driving experience, the upcoming 911 GTS is going to be a better bet.

But if only the GT3 Touring will do (and I completely understand if that's how you feel), here’s what you want to hear. It touts not only the spacious boot common to all 911s but also, because there are no rear seats, there is at least three times as much cargo space again in the cabin. Note, however, that the non-folding bucket seats restrict the opening for loading. This is a spacious car, one also given enough range from its 64-litre fuel tank to get you from London to the Nürburgring non-stop (there's also a larger, 90-litre long-range tank, but it's only available on LHD cars for some reason).

In fundamental terms, the driving experience is also slick: pedal travel, position and weight are just so and the auto-blip function is useful on the road, where you generally won't hit the brake pedal hard enough to justify heel-and-toe shifts. The gearshift mechanism is accurate and easy, too, though a little light for me, and is probably tuned that way to play into the GT3's overall sense of nimbleness, which, in fairness, it does. Visibility is also excellent and the interior hits that functional-luxury sweet spot that Porsche does so well. And while it’s noisy inside, conversation is still reasonably easy, though at a cruise, I know from having lived with one that even a Lamborghini Huracán Evo is quieter. 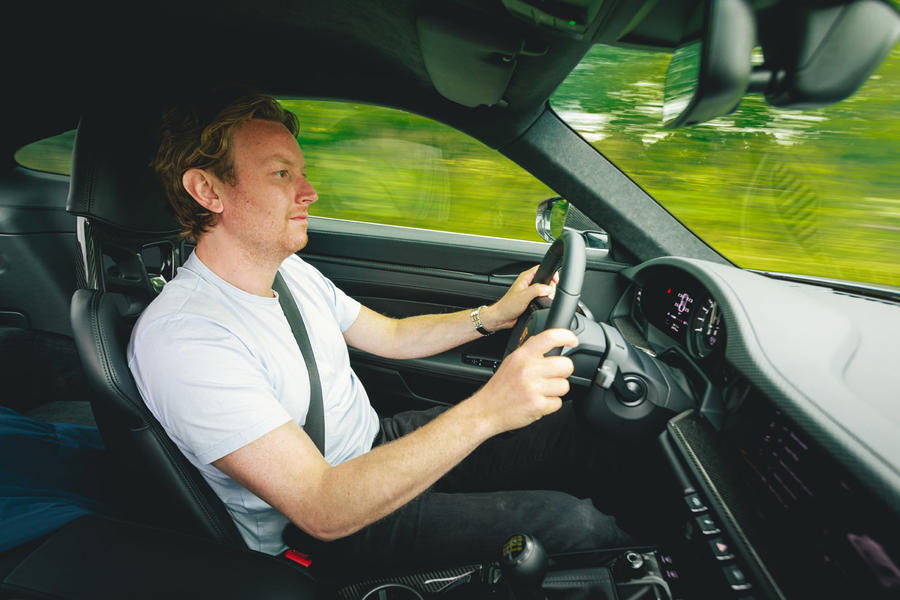 And hey, when you do hit an inviting stretch of road, this car’s combination of delicacy, feel and elemental energy makes it madly satisfying and fulfilling in a way that no other Porsche manages – which is saying something. It's an amazing achievement, the 992 GT3, and possibly at its best in Touring guise.

Which is why, despite the compromises the GT3 Touring demands, and therefore the slightly misleading name it carries, this wingless wonder still gets five stars, at least from this tester. What an utterly compelling car. 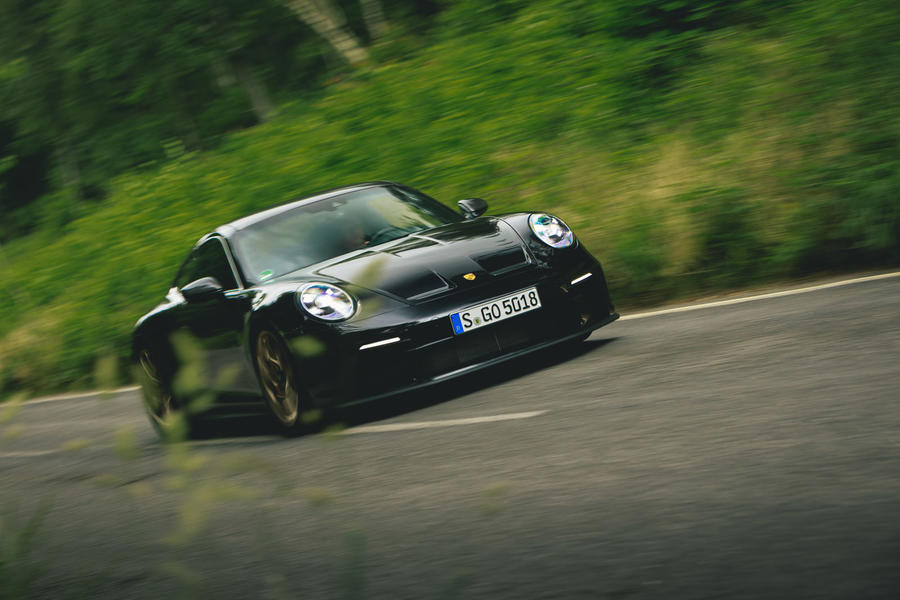 The overly harsh suspension should mean it didnt get that last half star, but otherwise it sounds good. I cant argue with a proper gearbox in such a car, but not being able to max it in any gear other than first on the public road isnt great. A real 'touring' model would have gearing that would allow you to enjoy the car and its wonderful engine more on the road.

Porsche quickly up price to £12800 before any UK cars delivered

A car for enthusiasts? Less now than it ever was