From £12,6558
Nissan adds 117bhp 'warm hatch' model to Micra range as part of mid-life revisions. Does it transform the supermini?
Open gallery
Close

Remember the Micra 160 SR? A gold star and extra nerd points if you do. Launched back in 2005, it was Nissan’s first and (until today) only attempt to push its supermini into the 'warm hatch' sphere in Europe.

To say it was unsuccessful is an understatement. Contemporary reviews suggest it was actually pretty competitive. But it seemed that car’s cutesy styling combined with the Nissan Micra’s driving school image did it no favours for enthusiasts on a budget.

But perhaps the latest generation is a better fit, with its more grown up, angular design and slightly more upmarket positioning. Nissan clearly reckons so, which is why it’s launched the N-Sport onto the market.

Far from just a cynical trim level, the firm is using it as the basis to introduce a new 1.0-litre engine, also available in other higher-end trims. All cars with the new engine get a bespoke chassis tune, lowered suspension and a new steering rack, while the N-Sport model gets subtle exterior styling tweaks and and natty Alcantara trim on the dash and seats.

Alongside this, model year upgrades include a newly designed infotainment system with additional connectivity, and a new smartphone app that allows some limited operation of vehicle features. 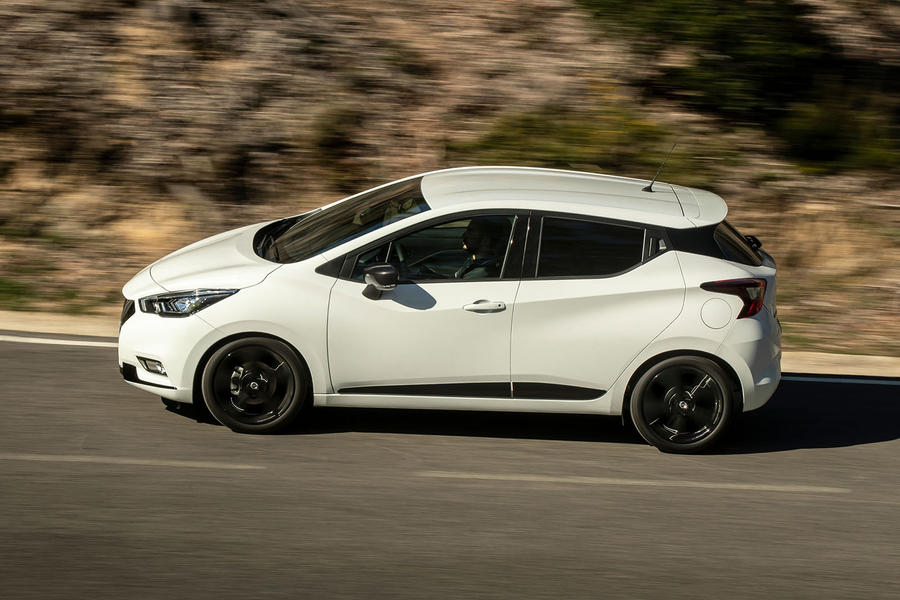 As good as it needs to be, we reckon. When the latest Nissan Micra launched in 2017 its biggest failing was that the most powerful engine option put out just 89bhp.

The Renault-sourced 0.9-litre triple also lacked torque, had an inconsistent throttle response and, thanks to its bizarre whining noises when revved, wasn’t exactly the pinnacle of refinement. It was fine in the lower rungs of the range, but with top-end Micras stretching towards £20,000 it couldn’t compete with the far gutsier turbo triples of rivals.

Responding to this criticism, Nissan has ditched the 0.9 for a 1.0-litre unit, available in two states of tune. The N-Sport is available In both, and we’ve got the more powerful unit here, putting out 117bhp and 133lb ft of torque, or 148lb ft for short periods with an overboost function.

Far from a simple software rejig, the more powerful 1.0 has a number of hardware changes, including direct fuel injection, a higher compression ratio and dual variable valve timing.

It means the N-Sport can realistically compete with cars like the Seat Ibiza FR and Ford Fiesta ST-line. Outright performance is still modest by anyone’s standards, and doesn’t feel as punchy as the Fiesta’s Ecoboost unit, yet there’s enough urgency in the mid-range that it rarely feels strained or out of its depth on normal roads.

Refinement is decent, too (somehow better than the lesser-powered unit we tried), save for some chuntering at low revs, although it doesn’t sound particularly effervescent. Minor gripes concern the throttle response, which still isn’t perfect, and the new six-speed manual gearbox which, despite a shorter throw, feels a touch imprecise.

We had plenty of praise for the Micra’s dynamic composition at launch, and the N-Sport upgrades build on that. The 10mm drop in ride height doesn’t just give it a meaner visual stance, it also combines with a revised spring rate to tighten up the body control to a noticeable degree in fast cornering. The quickened rack heightens the car’s sense of agility, too.

The result is a car that feels fluid and composed in most situations, with a ride that sacrifices a little - but not too much - of the standard car’s suppleness. As is usually the case, however, UK roads will be the sternest test of that particular trait.

The interior, while as largely free of colour and character as most of its rivals, offers up a competitive level of perceived quality. The aforementioned Alcantara is a rare touch in a sub-£20k car, while it also partially trims the seats. The new infotainment system is an improvement in terms of new connectivity features and better clarity, but sometimes lags between menu selections. Kit levels are strong, too, with Nissan's Safety Sense active assist tech fitted as standard.

Detail changes, such as a new centre armrest and standard rear electric windows (woah, I hear you cry, but they were never an option before) offer welcome convenience. But familar foibles remain, such as a rear cabin that's tighter on space than rivals. 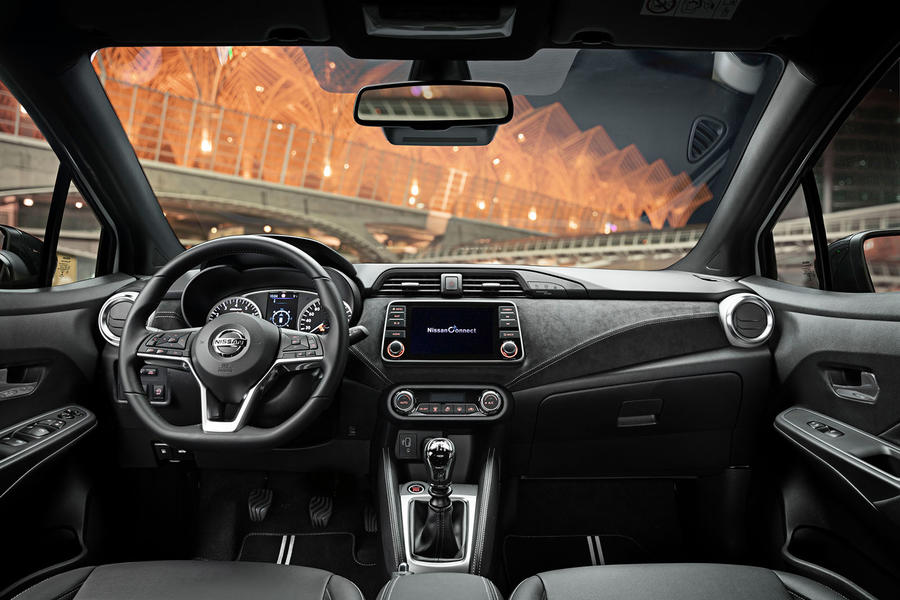 The biggest problem with many of these so-called ‘warm’ hatches is that the pricing point is so uncomfortably close to the fully-fledged hot variants that they seem, on the face of it, to be relatively weak value. The Micra N-Sport is no different, unfortunately.

But to dismiss it for this reason is to dismiss how popular cars like the Fiesta ST-Line are. Despite the list price, leasing deals for the Nissan are expected to be competitive, while what you lose in outright fun compared to a hot hatch you gain in greater everyday comfort and refinement, lower running costs and cheaper insurance.

With no 'hot' Micra on the cards for the foreseeable, this is as good as it will get for now. Enthusiasts will be better off plumping for the cheaper, flimsier and less refined (but far more fun) Suzuki Swift Sport, while rivals from Ford and Seat are more complete all-rounders. But Nissan’s stylish, polished offering is still worth a look - and, if you do want to save money, remember this engine and suspension setup can be had on the cheaper Acenta model. 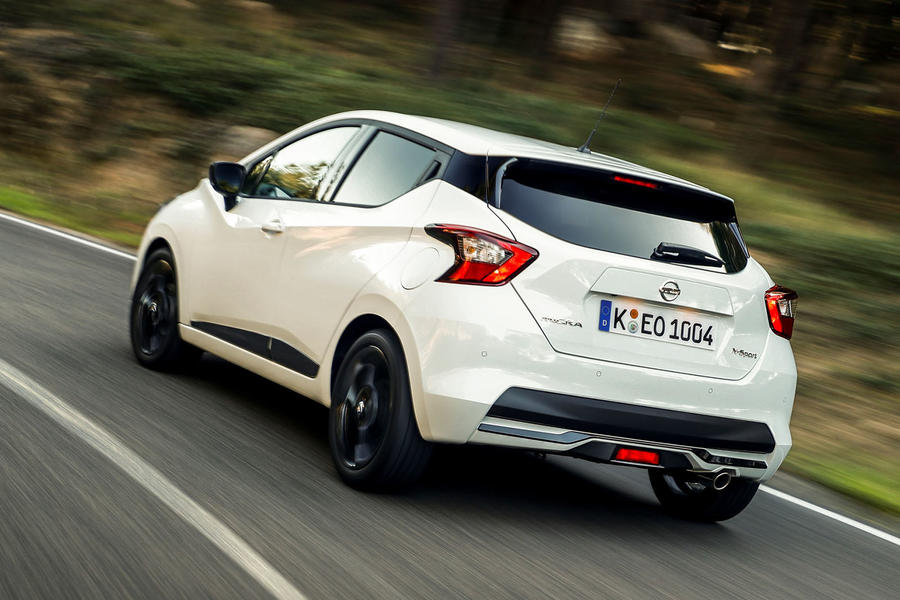 Why can't anyone building small cars these days put windows in the rear, rather than pill-box slits? It's minging!

Plus the performance is pretty "cool" (in a bad way) for a warm hatch.

I'm sure that Nissan is well able to deliver more power if the market was there. Problem is that most people want the sporty looks and equipment, but not the accompanying insurance cost and higher fuel bills that a genuine performance model brings. Nissan's priority is to make a profit, so it is simply responding to market demand.

Besides, I'm sure that it would feel pretty quick on account of the high torque output; more power would simply mean a higher top speed and a few tenths chopped off the 0 to 60mph figure. And dearer insurance...

Mind if a person is actually not interested in the performance

A person would alternatively be able to buy the cheaper 1,0l model admittedly little less powerful yet in lazy driving similar driving characteristics and in lazy driving unlikely to be much in it - when it comes to noticeable difference in performance. That would forgo the sporty looks, some equipment and the lowered suspension, however a person not interested in performance primarily interested in economy - probably would view the more comfortable ride of the less sporty ride setting as a bonus and probably is saving up to 2K in the process - and insurance probably even cheaper to boot.

I'm sure that Nissan is well able to deliver more power if the market was there. Problem is that most people want the sporty looks and equipment, but not the accompanying insurance cost and higher fuel bills that a genuine performance model brings. Nissan's priority is to make a profit, so it is simply responding to market demand.

Besides, I'm sure that it would feel pretty quick on account of the high torque output; more power would simply mean a higher top speed and a few tenths chopped off the 0 to 60mph figure. And dearer insurance...

The Focus ecoboost never felt too slow even however it by no means ever felt fast. Being some degree lighter - a Micra should be a little faster. But the Micra N-Sport can't really be sporty choice even so - more about, looking sporty without being so - I guess. At least a Suzuki Swift actually appears being reasonably peppy for little less money. That Micra clearly appears not being a - value choice.