Such is the pace of progress in the automotive industry that not even the title of the world's best-selling plug-in car can leave you immune from change. That’s why the Mitsubishi Outlander PHEV, an electrified car that sold in 105,000 units in Europe alone last year, has received a large number of under-the-skin changes for its mid-life update.

The six-year-old Outlander PHEV gets a new 2.4-litre petrol engine and enhanced electric drive architecture, as well as a more rigid structure. The result, claims Mitsubishi, is better on-road performance and improved comfort to make the car a plusher proposition.

The updated model retains the rugged off-road driveline of its predecessor, something that Mitsubishi believes is key to ensure the electrified SUV can successfully fill the void left by the Mitsubishi Shogun, which finally went out of production in April. That has promoted the Outlander PHEV into the role of Mitsubishi’s flagship, but is it worthy of that moniker? 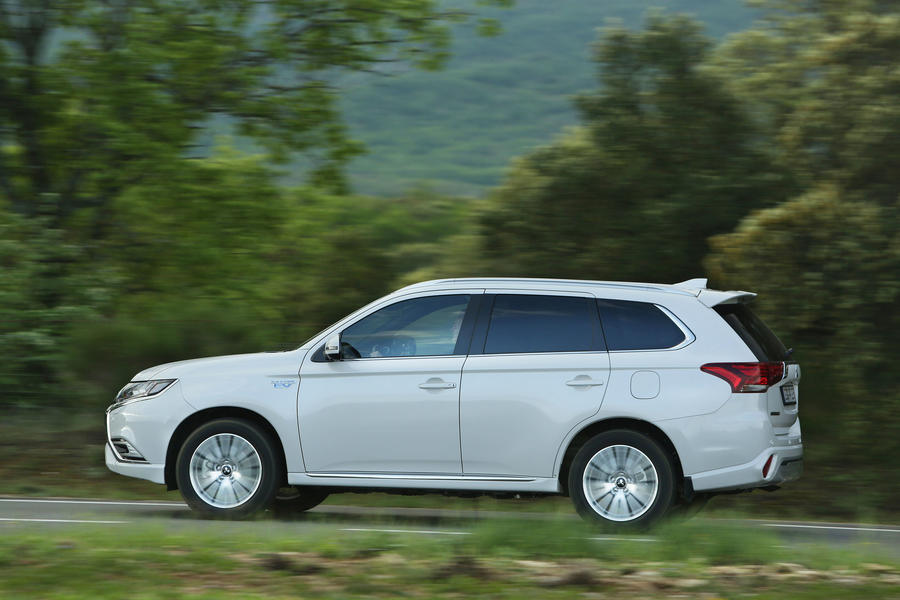 Walk up to the 2018 Outlander PHEV and you’ll be hard-pressed to notice any changes. Aside from a new set of wheels and simplified front grille surround, the car is largely identical to the original, which Mitsubishi says is a reflection of the happy customer response it received for the design.

The same is true inside, where aside from a new leather finish in higher-trim models and one different drive mode toggle switch on the centre tunnel (more on that later), the design is identical to that of the pre-update car.

The centre console features the same 7.0in infotainment touchscreen, which comes with Apple CarPlay and Android Auto smartphone mirroring, as well as menus to illustrate the how the car's powertrain is distributing its power. However, it features clunky menus that make poor use of screen space compared with most rivals'. Beneath the screen, the layout of buttons on the dashboard and central tunnel are functional, but some of plastics feel cheap for a near-£40k car.

It’s not until you get going that the Outlander PHEV's flagship status begins to feel more appropriate. It feels more like an electric car from the off, because it’s unlikely to call the new 2.4-litre four-cylinder petrol engine into action unless you really boot the throttle. In any driving other than heavy acceleration, the twin-motor electric architecture, which now features a more potent rear motor that produces 94bhp (the one driving the front stays at 81bhp) and a higher capacity 13.8kWh battery (up from 12kWh), is more than capable of shifting the 1880kg SUV.

In electric mode, the car is said to be capable of 28 miles (WLTP) before the petrol engine is required to provide drive. It certainly leaves the Outlander PHEV feeling far more advanced, in terms of powertrain, than conventional cars in this segment.

The engine acts mostly as a top-up for battery power and kicks into life seamlessly when required. It's larger than the old car’s 2.0-litre unit because it runs on the more efficient Atkinson cycle, which leaves it with a lower bhp-per-litre ratio; by growing by close to 400cc, it can now provide more performance while offering enhanced economy, although the stats (141mpg and 46g/km of CO2 emissions) are slightly hampered by the switch to the WLTP test, so don’t reflect this on paper.

The extra performance is obvious both in pure electric and hybrid modes, with quicker throttle response and more eager rolling acceleration. With a 0-62mph time of 10.5sec, the Outlander PHEV is by no means fast, but it possesses the linear shove of an EV that makes overtaking and pulling out of junctions feel effortless. Plus, top speed in electric mode has increased from 78mph to 84mph.

Mitsubishi has used more adhesives in the Outlander PHEV's structure to create a more rigid body-in-white, and it has tweaked the car’s steering and suspension to enhance ride comfort. While a back-to-back drive in the original and updated car showed that the differences are small, they are quite noticeable on certain surfaces. Vibrations through the body have reduced and the car deals with cracks and ridges in the road more confidently, swapping thuds for a more rubberised reaction through the suspension.

The steering is also slightly more responsive in order to make it easier to guide this large SUV through lanes and require less input to navigate through tight urban streets. That being said, there’s nothing in the way of steering feel, and the car rides like a proper SUV, in contrast to other high-riding models like the Skoda Kodiaq, which are more planted on the road. But the Outlander PHEV feels more rugged, which Mitsubishi believes is important to appeal to its traditional buyers, many of whom are said to value good off-road capability.

The response from these existing buyers has also encouraged the introduction of Sport and Snow modes, which can be activated via the aforementioned new toggle switch. In Sport, the engine is called into action permanently, providing input to front-wheel drive for maximum performance. Snow adjusts the driveline, which can juggle torque front and rear, with 0-100% available from each axle, into its most sensitive mode. Torque between sides is automatically controlled using the brakes, providing a form of torque vectoring on slippery surfaces. 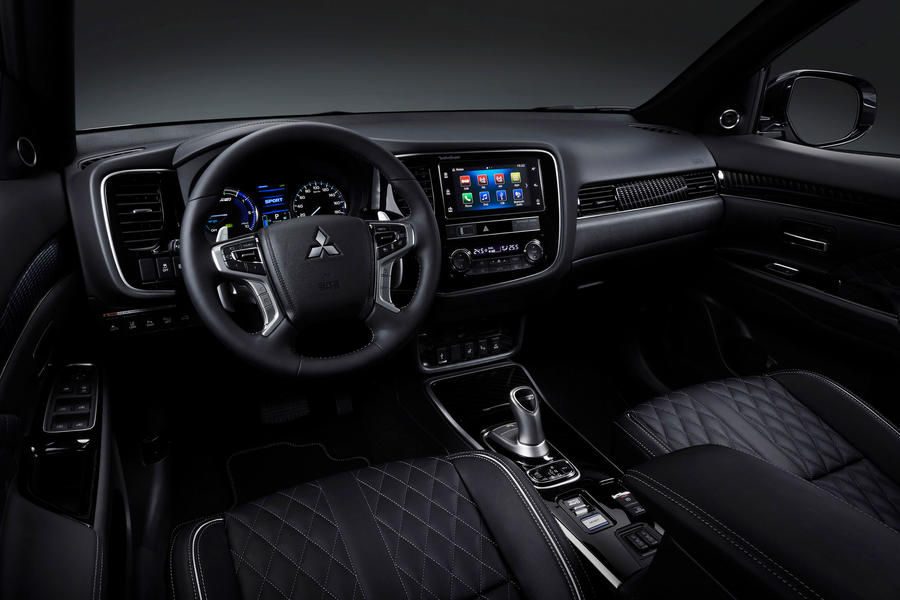 Let’s be frank: with an anticipated starting price of close to £40,000, not even the Government’s £2500 subsidy for plug-in hybrids can move the updated Outlander PHEV out of the firing line of plusher rivals, such as high-spec variants of the Skoda Kodiaq.

Those not concerned with higher mileages or zero-emissions driving capability will find cars offering a longer list of standard equipment and better on-road handling elsewhere.

But for those that rank the tax advantages, fuel efficiency and electric-only driving range of a plug-in hybrid highly, the new, more efficient powertrain of the Outlander PHEV makes it stronger than ever, even in the face of a tougher emissions test.

That this high-riding SUV now also has extra grunt and enhanced refinement means it will prove a wise buy for many. 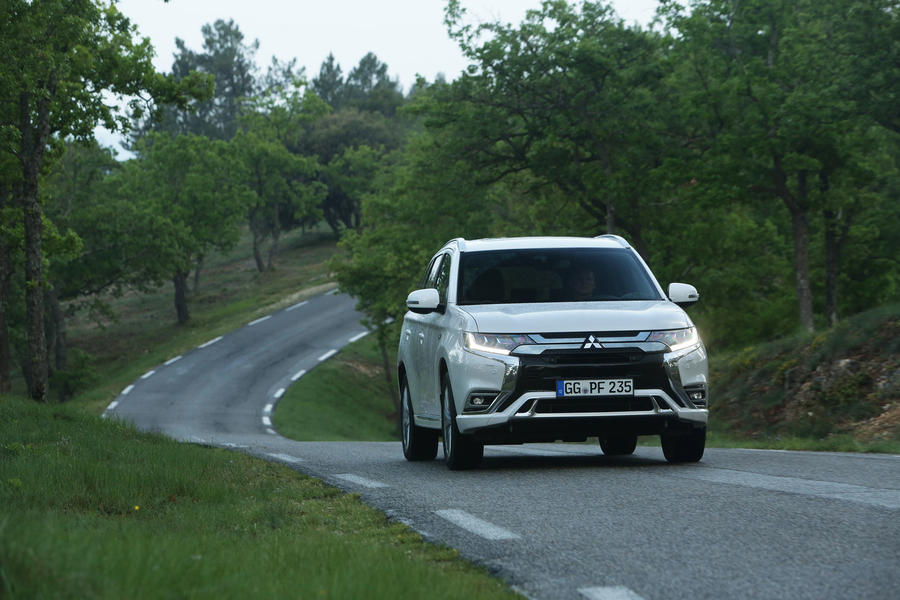 Did I paint that?

Did I paint that?

The detailing on this is a mess and the proportions are still wrong. Wheel-base too short, overhangs too long (Great for any off-road use. Not. So much for it being an SUV!)

Just to confirm, this is specific to the UK, where the Shogun has been discontinued.