The Mitsubishi Outlander PHEV is, by the manufacturer’s own admission, the most important car it makes. Launched in 2014, the niche plug-in hybrid SUV became a sales sensation as the UK’s best selling plug-in hybrid and threw Mitsubishi to the forefront of the green revolution in big cars.

Since then, however, the company and the car have faced some setbacks. News of electric motorway charging stations becoming a paid-for service means that an 80% charge of the car’s 33-mile range battery costs around £6, and the government's plug-in grant has been halved. Meanwhile tax changes due in April mean that instead of being free from VED, it will cost £10 for the first year then £130 every year after that on vehicles that cost £40,000 and below, the bracket into which most Outlander PHEVs fall. Above £40,000, you can expect to pay around £440 a year.

But while the Mitsubishi's prospects as a private buy look to have been severely hampered, low CO2 emissions mean it's still a cheap company car option that undercuts any like-for-like conventional diesel rivals.

The car received a comprehensive update in 2016, but it’s been lightly refreshed again this year because it’s such an important model for its maker. The electric-only range has increased by one mile (yes, just the one) to 33 miles, while CO2 emissions have dropped by a single gramme per kilometre to 41g/km, along with an improved claimed combined economy figure of 166mpg. Elsewhere the suspension has been altered again with new dampers and rear bushes. 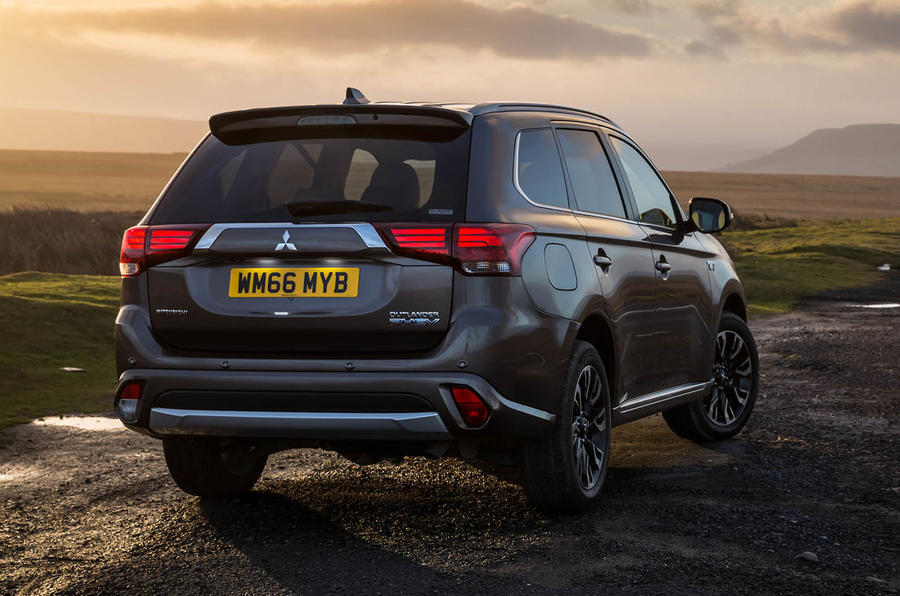 Differences from the 2016 model are minimal, but if nothing else that means you can still expect the same combination of high-riding SUV practicality matched with an impressive hybrid powertrain.

Push the power button and all you get is an eerie silence on start up, and moving along at low speeds it’s whisper quiet and relaxing to drive. Crank up the speed, however, and road noise becomes more noticeable, and when it’s just the petrol engine powering the car it’s noisier still.

One difference in the new model is an EV Priority mode, which means that by pushing a button on the centre console you’re able to keep the car in electric mode only, provided there's sufficient juice in the batteries. Don’t expect to be able to do this for too long, though. While Mitsubishi claims the Outlander PHEV is able to cover 33 miles on electricity alone, our range indicator was claiming it had around 20 miles left when it was nearly full on our cold test route.

Likewise, the fanciful official combined economy figure is far more likely to be less than half the claimed 166mpg in the real world. Presumably emissions of CO2 suffer the same fate, but at least the on-paper figures mean it remains a great value choice as a company car.

In electric mode the initial burst of acceleration is impressive thanks to the instant torque, but because of the sheer bulk of the car it struggles to feel quick running on battery power alone. When the 2.0-litre petrol engine kicks in it helps make progress more brisk, but overall the Outlander still feels sluggish. At least the power is delivered smoothly through a CVT transmission.

You can decide via an array of settings when to recharge the batteries, when to use electric drive only and when to ensure all four wheels are being driven. But left to its own devices the powertrain will stick itself in hybrid mode and seamlessly switch between the petrol engine and electric motors. Regenerative braking is controlled via the paddle shifters on the steering wheel to help give the battery more juice. 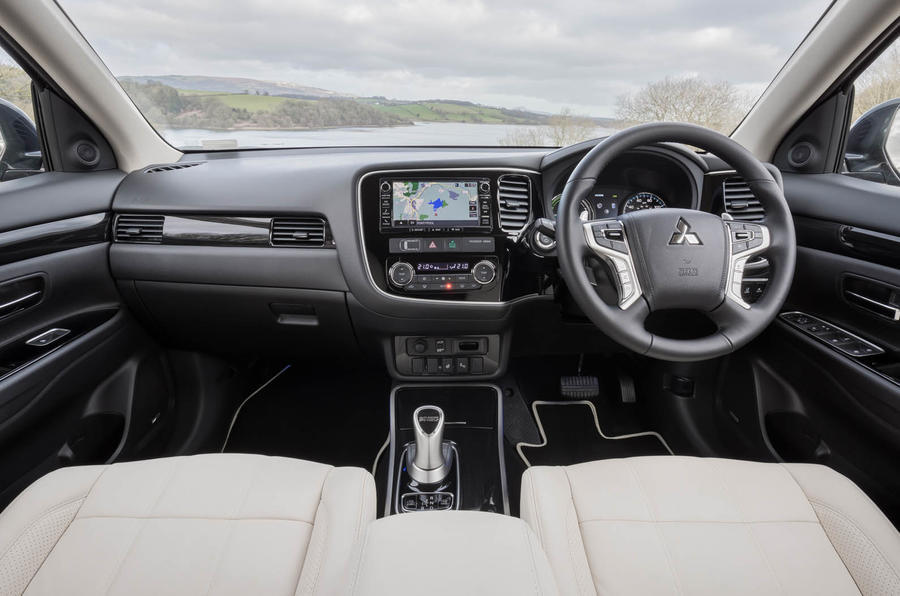 The suspension has been revised but it’s only a slight improvement over last year’s update. It’s still caught out by bumps at low speeds and, predictably enough, there's some body roll through corners. It doesn’t feel as agile as rival SUVs such as the Nissan X-Trail or Skoda Kodiaq, but the Outlander’s steering is well weighted and quick.

It’s relatively easy to sort yourself a good driving position, but steering wheel height and reach don’t have a great deal of adjustment. Visibility all round is very good, though, and there’s plenty of space up front.

Top spec 5h versions, as tested, get a new Nappa leather interior, an upgraded audio system and some new safety technology, including lane departure warning, forward collision warning, adaptive cruise control and auto high beam, while 4h models also get the new safety technology. Some of the plastics used in the dashboard don’t feel particularly high quality and the 7.0in touchscreen infotainment system is basic, but there's a lot of kit. We’d advise stickinh to the cheaper trims, which still get things like DAB, Bluetooth, a reversing camera and parking sensors.

By default, the Outlander PHEV remains the best plug-in SUV you can buy, but dynamically it remains average and it’s facing more adversity than ever. This light facelift doesn't change much but it remains an economical and practical choice if your load-lugging journeys only cover a few miles at a time.

If that's your scenario and you can charge it regularly, the Outlander's low running costs can make sense as a private buy. You still get some money off from the government grant, and other incentives include a five-year, 62,500-mile warranty and a free home charging point installed by Chargemaster. But families wanting to broaden their choice os SUV should also consider cars such as the Nissan X-Trail, Skoda Kodiaq or the diesel Outlander, all of which will offer similar day-to-day running costs

As a company car choice the Outlander PHEV is way ahead of its rivals thanks to its ultra-low benefit in kind tax of 9%, which means it undercuts any diesel equivalent.

Did it have the handbrake on?

I've given up reading the articles, the comments are way more entertaining.

Funny how the review never reflects the car for real

You say in this review that as the speed increases then you get more road noise, and you say the car feels sluggish.

And to say it's sluggish- not at all. This car goes from 0-30 extremely quickly and the power all the way to top speed is incredible for a car of this type. Especially when it's only a 2.0 petrol. But what an engine it is. Incredibly reliable and it is not noisy on the move with the gearbox. It's way more refined that the other hybrids.

A friend of ours did a test against a V8 range rover sport from 0-60 and the PHEV won. That's not a sluggish car.

Just to add there's also a spelling error in this review. Does anyone at autocar actually proof read anything that goes on the web or in the magazine?
AndyWolves 19 January 2017

"Above £40,000, the bracket into which THE Outlander PHEV FALLS, you can expect to pay around £440 a year." -- The majority of Outlanders (i.e. not the 5h and 5hs reviewed here) won't be in this bracket as it currently starts at £32,000 (£34,000 without grant) so the statement is technical wrong! BUT my post is all wrong if they dumping the cheaper versions, they're still on the website!
So in truth I'm not sure!
View all comments (6)