From £59,5207
May not be your idea of a desirable luxury car, but it’s certainly an effective one. Refined, efficient, brisk and easy-to-drive, although still not as versatile as a ‘proper’ SUV
Open gallery
Close

It will be interesting to watch whether that slightly odd, oversized automotive crossbreed, the full-size SUV-slash-coupe, survives the transition from internal combustion to full electric power that all luxury cars are supposedly set to undergo over the next decade or so.

You might reasonably assume that any supposedly elegant and exclusive premium vehicle that could be replaced by something lighter, lower-of-profile and better-suited to eking out range from a battery pack, necessarily will be. If going electric across the board does mean pressing the reset button on whole showroom model ranges, who’ll shed a tear for the likes of the Mercedes-Benz GLE Coupe, you might wonder?

Well, luxury car-buyers just might. Much to the puzzlement of plenty of industry commentators, those buyers do seem to like big, curvy-roofed SUVs like this. Moreover, if it takes a lot of batteries to make a car this size work as an EV - and, lordy, it will - there should certainly be plenty of space in which to hide them away.

The GLE Coupe has just made it onto UK roads in second-generation form, and buyers can already buy an ‘electrified’ version of the car if they want to. The diesel-electric GLE 350de hybrid is the headline new addition to the car’s powertrain range. It’s at once the cheapest, most company car tax-efficient and potentially the most fuel-efficient version of the car going, depending on how you use it. Thanks to a drive battery of more than 30kWh, it’s also got a 60-odd-mile claimed electric range, which might just be enough to win over certain critics of the plug-in hybrids all by itself.

And for those who don’t think the ‘PHEV’ will be the GLE Coupe to have, there’s this: the six-cylinder diesel GLE 400d. It’s the only other non-AMG-branded derivative available, and it comes in one mechanical specification and in one trim level. UK buyers can choose what colour paint they want, and towing preparation is a no-cost option; that’s it. From wheel design to interior trim to equipment count, the car you see in these photos is the one you’ll get.

Which also means, of course, that you get a lot of standard equipment. This GLE is a little bit pricier than its rivals from BMW, Audi and Land Rover, but it comes with air suspension, 360-degree parking cameras, heated and ventilated front seats, a big head-up display, and with just about every driver assistance system going. It also gets Mercedes’ top-level ‘MBUX’ infotainment system with its wireless smartphone charging and ‘augmented reality’ navigation, and a Burmester premium stereo. For those who like a fully-loaded luxury car, that should do very nicely. 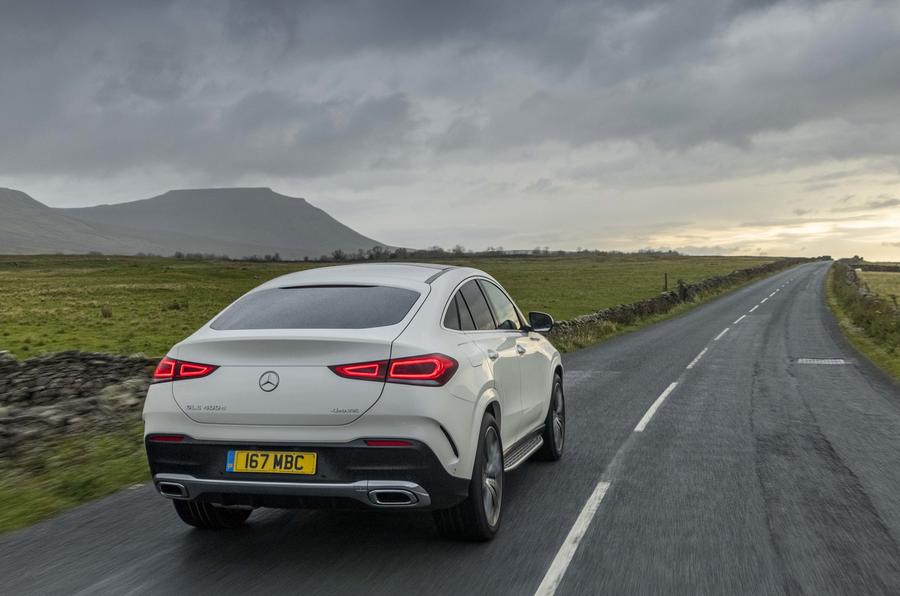 The second-generation GLE Coupe is a longer and wider car than the first was; it now has a shorter wheelbase than the current Mercedes-Benz GLE SUV, but one that’s also longer than was the previous car’s. The dimensional changes were intended to make it better-proportioned and better-looking, as well as more roomy. I’m still not sure about the looks - but, for what it's worth, if big, rakish SUVs do appeal to you I’m equally unsure why this one wouldn’t.

Inside there’s now enough space for taller adult passengers in both rows, or three kids across the back seats. In addition to all of the equipment we’ve already mentioned, there’s also the richness and solid material feel to the car’s fixtures and fittings that you’d hope for in a £70,000 luxury car. Cargo space is plentiful below the loadbay cover, although the shape of the car’s plunging roofline would make it a lot less useful for carrying bulky things like bikes and buggies than the regular GLE.

The six-pot engine really is incredibly refined for a diesel. It’s quiet and smooth, barely raising much audible protest even when you make it work a bit, and the truth is that it gives this car every bit of the outright potency and drivability that it needs. That peak torque (516lb ft) is precisely as much as the hybrid version of this car makes (between its combustion engine and its electric drive motor combined) tells you everything you need to know about the wafty sense of roll-on flexibility this car commands.

There are, of course, two AMG-branded derivatives above this model in the GLE range, and so it seems reasonable to assume that 400d buyers won’t be looking for much more than effortless briskness by way of performance, plus perhaps good tank-to-tank touring range. Well, it’s all pretty effortless. Leave the drive mode selector in comfort mode and the gearbox shifts smoothly, timing its actions well, and letting the engine growl distantly up to the top of its torque plateau when you use plenty of pedal before grabbing the next gear.

Drive this car hard and it can feel pretty fast; not that you will very much. At the more relaxed pace at which it is at its most convincing, it’ll beat 40mpg across motorways and A-roads easily, closing in on six-hundred miles between fills when you’re covering longer distances.

The standard-fit 22in wheels (the same size as either the GLE 53 or -63 S gets, would you believe) don’t hamstring the low-speed ride as much as you might expect, and road noise isolation is quite good. The air suspension makes for a pillowy feel to the car’s gait in default running, with just a little bit of longer-wave lateral shuffling about the close body control as you approach the national speed limit. ‘Sport’ mode dials out most of that 'corkscrewing' and makes the body control feel tauter at speed, although the ride becomes a bit less absorbent around town.

The steering feels light, filtered and muted whichever of the driving modes you use, which suits the car’s wider character; but it’s no invitation to go in search of driver engagement. The GLE 400d Coupe actually handles pretty tidily when hurried along and it’s secure and stable enough, too, when you dial up the suspension; but it isn’t the most naturally agile of big cars. If you came to it looking for a more rewarding drive than you might get in a regular big luxury 4x4; something to rival a Porsche Cayenne, perhaps? Hmm; better keep looking. 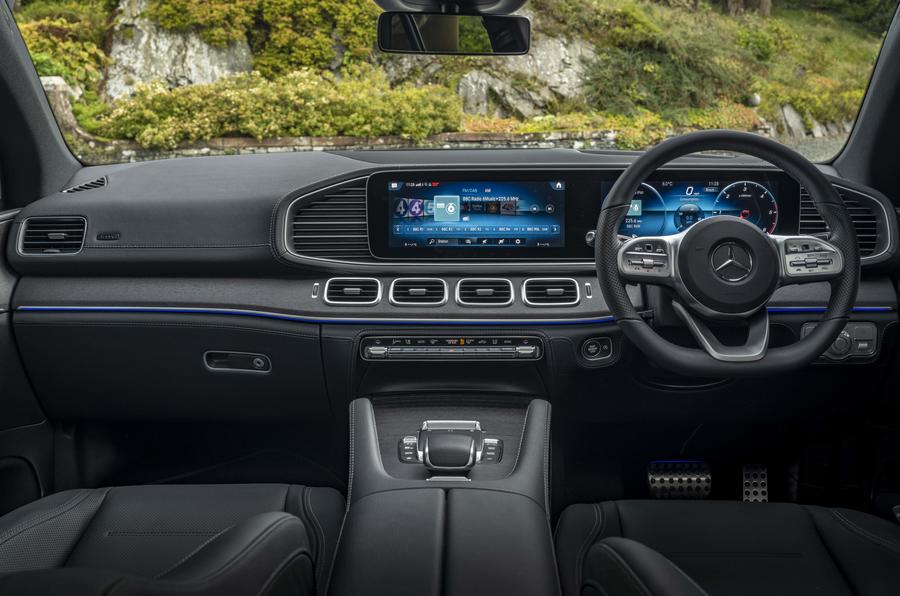 Designer SUVs like this are still among the most divisive things on the road, and so you’ll likely either love the idea of a big, versatile, luxurious car like this or you really won’t. Personally, while it's pretty clear that this is a more effective 'big Benz' than the last GLE Coupe, nothing it did while on test came close to making me want to keep it forever.

For those in the 'love it' camp, though, there’s a lot to be said for the simplicity of this car’s dynamic brief. In spite of the 22in wheels and the diving roofline, the GLE 400d is all about comfort, refinement and ease-of-operation - and it produces them all very plentifully. 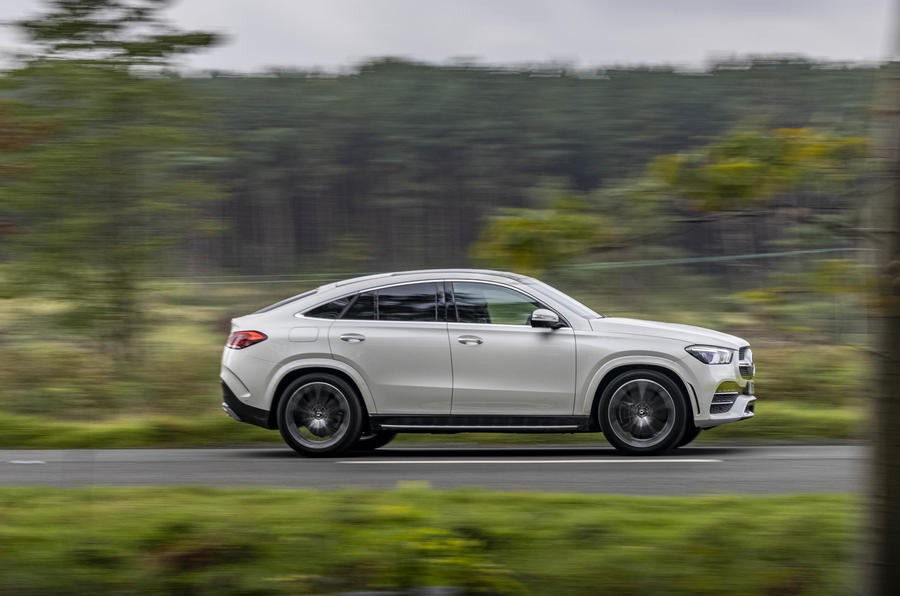 I cant see what other see in these cars SUV coupes' exterior designs. They look like mutants between an SUV, coupe and sedan. But then I didnt like the Vel Satis either.

A pinnacle of vulgarity

That's a peach of engine, but I can think of a thousand cars I'd rather have it in.

Not only the sloping coupe

Not only the sloping coupe roof but also the rising shoulder line that together make the rear window very compressed. It must be like a black hole inside.

To sit high in a SUV you are supposed to get an enhanced view out, but these absurd coupe SUVs restrict vision except out front.