From £61,3107
Can a £10k track pack turn this left-field alternative to the German fast coupe establishment into a must-buy? We get behind the wheel
Open gallery
Close

Mid-life revisions for Lexus’s offbeat two-door, driven on British bitumen for the first time and in range-topping RC F form.

It’s difficult to find exclusivity in the mid-sized premium coupé market, simply because it has been sewn up entirely by the German trio. Their unwavering dominance has forced those traditionally able to offer a more original take on the format - think Volvo and Alfa Romeo - to give up. But Toyota’s luxury brand has kept its toe in.

It’s all the more refreshing given that European sales figures are so tiny. Lexus shifted around 1300 RCs across the region in the whole of 2018. Audi registered nearly 6000 A5s, S5s and RS5s in March of this year alone.

Yet there’s major selling points to the RC. Bizarrely, in our ever-electrified world, it’s the only car in its class that can be had as a hybrid. The RC F, too, has one of the very few naturally aspirated V8s left on sale in the UK.

The one we’re driving here also comes with a £9750 Track pack, bringing lightweight forged wheels, a torque vectoring rear diff and carbon-ceramic brakes with red Brembo calipers. That’s not to be confused with the Track Edition, an altogether more serious - and expensive - proposition. 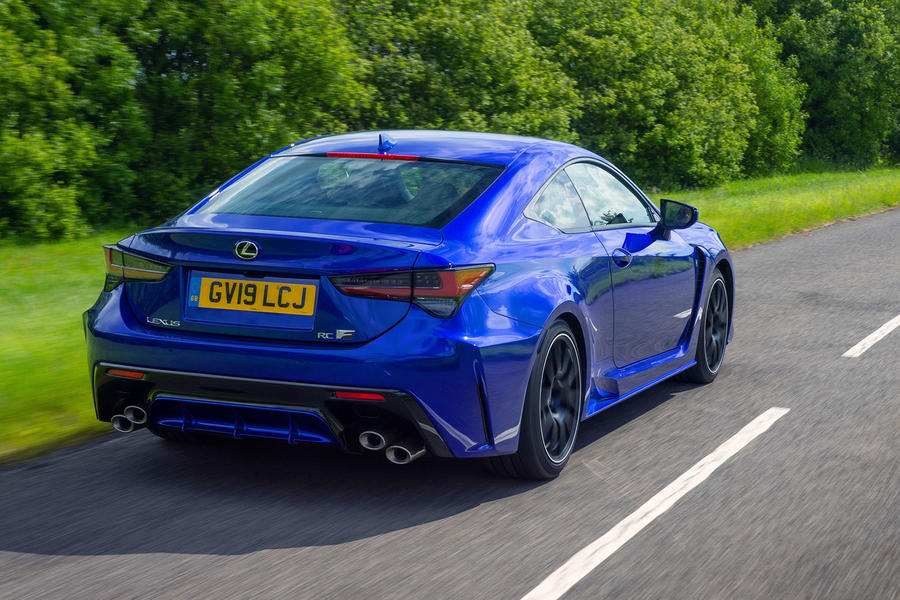 Much as before, appealing in a flawed yet likeable way. And an strange dichotomy between the old-school and the high-tech.

Neater LED lights and bumper tweaks do little to change the RC-F’s divisive looks, although compared with the already striking RC, the sporting model’s treatment is less in-yer-face than the German equivalents. You still get those neatly stacked (and refreshingly un-fake) tailpipes and a retractable rear spoiler to mark it out.

Changes inside are even less dramatic. The focus is on a number of minor quality improvements here and there, boosting the already richly trimmed, impeccably solid cabin's appeal. Oh, and you’ll be pleased to hear the previously woeful infotainment has been updated with a larger, glossier screen and easier menu navigation.

Of more interest is that beguiling atmospheric V8, which - contain yourself - has less power than it did in the old one. You can thank the hoop jumping and emission reducing required for it to meet WLTP regulations. So power is down by 13bhp and torque down by 7lb ft.

Does this have an effect? Not noticeably. Lexus has tweaked the final drive ratio and brought in a new launch control system, which alongside a slightly reduced kerb weight means it’s actually a touch quicker to 60mph. That launch control, like much of the RC F, is very different from rivals' in that it brings revs up to less than 2000rpm before it activates. Lexus claims that’s the optimum point of rear axle traction, but it feels rather odd.

Regardless, judged on in-gear pace alone, the RC F is soundly outclassed by turbocharged rivals. Where it claws back its advantage is with noise, character and response.

Gun it from near idle and it will disappoint, feeling markedly lethargic below 4000rpm. This is a powertrain that needs to be rung out to reveal its riches, rather than presenting them to you on a plate from the get-go. The reward for stretching it out comes aurally in a glorious, hard-edged metallic wail reminiscent of the V8s BMW M and Audi RS were churning out a decade ago. The new intake adds a little extra induction noise, too. 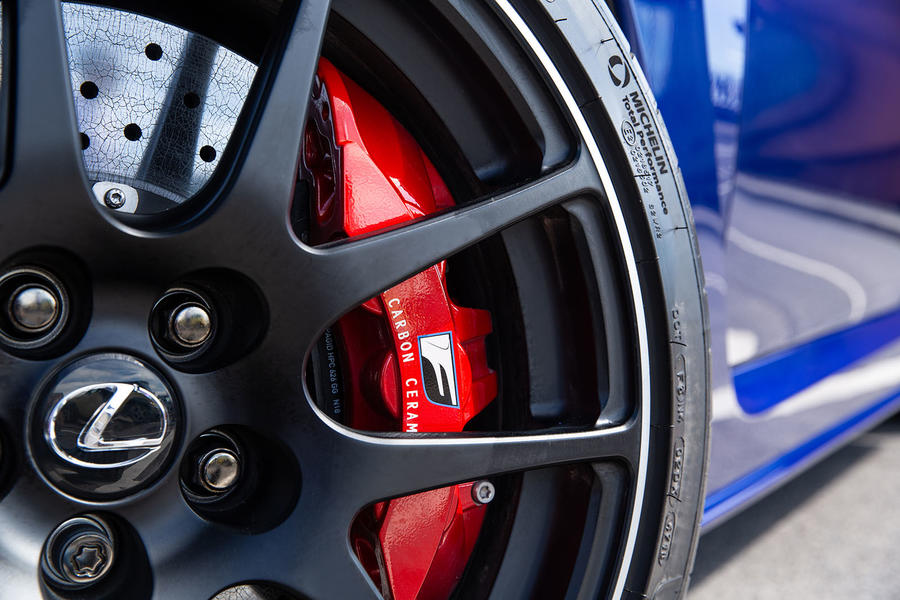 A barrier to enjoyment remains in the eight-speed automatic gearbox, which, perhaps because of the shortage of torque, needs driving around. If you’re bumbling along and clog it, it will drop a couple of gears and then, a second or two later, drop another without warning. Downshifts can be frustratingly slow at times, too, even in the most aggressive mode.

And as for the Track pack? We wouldn’t bother: this is no track car. Despite the engineers’ nerdiest efforts to shave off some weight for the facelift with new aluminium chassis components and revised suspension, this is still not far off 200kg heftier than a BMW M4, and it feels it.

The body control, grip levels and steering precision are well sorted enough for the kind of eight-tenths road driving this car is ideal for, but push beyond that and there’s nothing like the sense of agility, finesse and adjustability offered by the best. You just feel like you’re trying to manage mass and that’ll only become more pronounced on a circuit.

There’s not really a traction issue, either, so the torque vectoring diff rarely made itself felt on our route. Only the ceramic brakes make a case for themselves. The pedal is firm and stopping power is plentiful, unlike the slightly weedy standard items.

Other flaws? The beautifully comfortable front seats are mounted too high, so taller people feel more hemmed in than they should. Rear head room is pitiful, too. And, despite the upgrade, it still lags behind the Germans for technology features and usability. 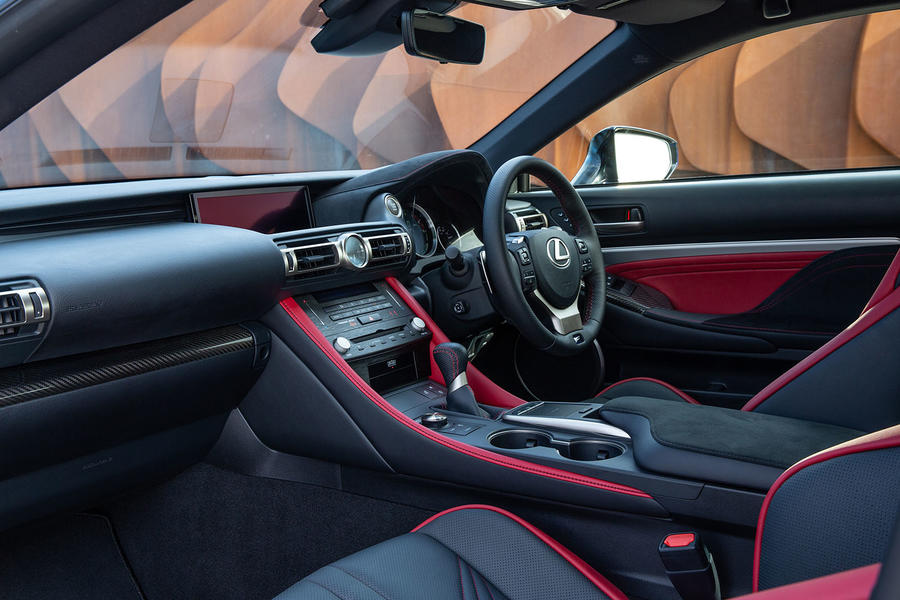 The RC F still feels like a classic muscle car in an industry that, by and large, has long since moved on. There’s a fine line between being refreshingly old school and just plain dated, and the Lexus straddles it.

But it’s less one-dimensional than something like a Mustang - as you’d hope, given the price jump. It’s a pleasant daily driver, for one: the ride is surprisingly supple, refinement is superb, the gearbox is far more slick when you’re just pootling along and the cabin is a paragon of pleasing details and rich materials.

But its position as a fast-ish, pleasant GT car rather than an out-and-out sports car comes under scrutiny when Lexus also offers the more appealing LC, with the same engine, for not that much more. We’re hoping the new Track Edition, with its weight-reducing carbon bits, can give it more of an edge in terms of driver appeal. 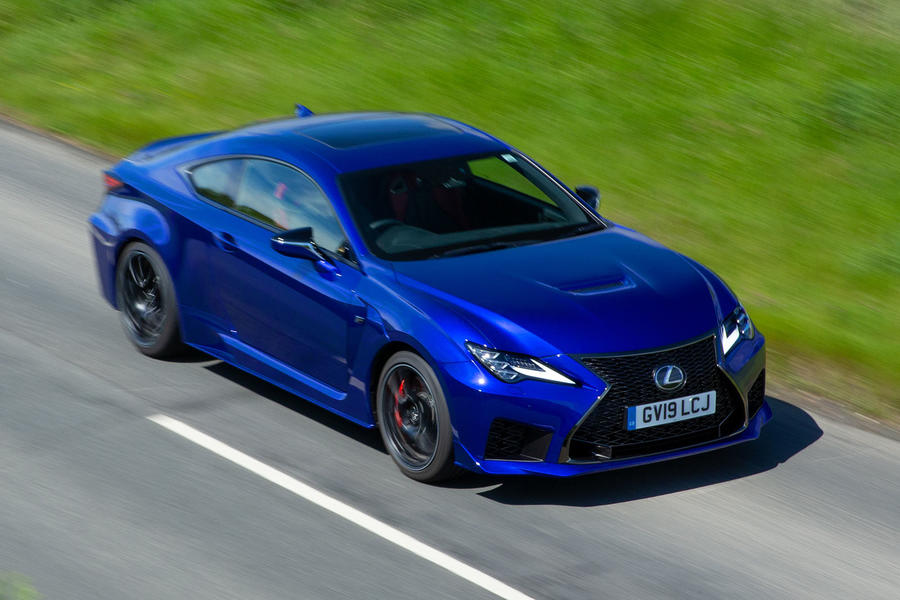 That it's naturally aspirated

That it's naturally aspirated is great, that it also looks stunning to my eyes adds further to the appeal, it has far more performance than I'd ever need and appears beautifully appointed, scrap the track pack and keep it standard for a very fast awesome sounding sports coupe. I'd love one.

It is not the fastest and it never tried to be. It offers a unique, comfortable and naturally-aspirated, quick-enough grand touring experience. Good enough for me.