8
Share review
Delivers open-air thrills in a way few supercars can match, despite a few minor issues, thanks to the irresistible appeal of a V12 engine
Share
Open gallery
Close

Opportunities for those who would like an open-air supercar with no fewer than twelve mid-mounted cylinders are thin on the ground.

There is the fantastical £2.3million Pagani Huayra Roadster or the Lamborghini Aventador Roadster, which is now available in heavily revised S form, driven here.

Even at £251,462 before some exorbitantly priced options (it costs £820 to have the calipers painted black, for example), the Lamborghini is a snip relative to its compatriot, and, but for a pair of 25kg carbonfibre roof panels that unclip easily enough and slot into braces in the luggage compartment under the bonnet, it's mechanically identical to its much-improved coupé sibling.

As such, were you to strip away the carbonfibre-and-aluminium bodywork, you’d find push-rod suspension – à la Ferrari Enzo and Porsche Carrera GT – with retuned in-board spring-and-damper units and driveshafts leading to all four corners.

There's also now four-wheel steering, and 90% of torque can now be put through the comically broad 355-section Pirellis at the rear, up from 80%. 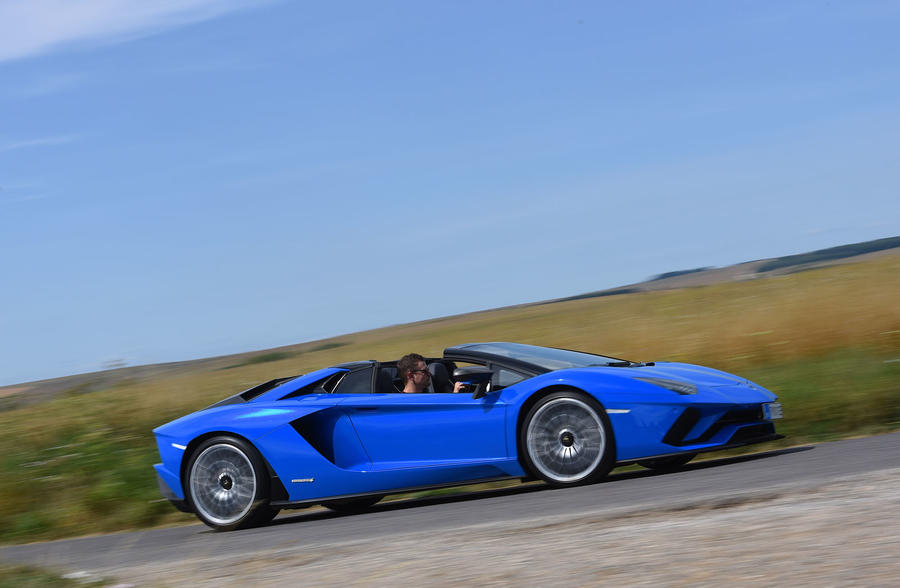 Those figures alone tell almost everything you need to know about the frenzied experience of driving an Aventador S Roadster. Its response to throttle openings isn’t as savagely immediate as that of the Huracán Performante’s V10, but the tone it produces is broad, grittily metallic and seemingly without even a gram of fat. With the roof off, it’s a continuous delight. And when a downpour during testing necessitated a speedy roof installation (a scramble lasting at most two minutes), the tiny rear screen, once lowered via a toggle switch on the dashboard, allowed in a tremendous amount of cam scream and exhaust blare anyway.

Taller drivers won’t appreciate the pillbox-style view ahead, and the car feels big and intimidating out on the road in a manner absent in lesser supercars. Its width (and this is excluding mirrors) is such that even if you line things up to perfection, the bodywork still can't negotiate the 6’6” width-restrictors originally put in place to stop lorries. So extensive is the chassis that for those first few hundred metres, the steering column feels ten feet long, and adjusting the rudimentary air vents that bookend the dash requires a whole-hearted lunge, arm outstretched.

Those plain, plastic vents are illustrative of an ageing interior smattered haphazardly with switchgear and an infotainment display that’s pitifully small. The cabin is one area in which the Aventador’s replacement, due in the early 2020s, will need to make strides. As for rear visibility, forget it. You might as well have your back up against the Great Wall of China. And although the new four-wheel-steering system helps matters, the car's 12.5m turning circle is still a full metre more inconvenient than that of the Performante, which is itself no spinning top.

Even so, performance is extraordinary, and heightened not only by the grandeur of the engine but also buffeting from the wind, which is conspicuously bad at motorway speeds. Were it not for that and a paucity of stowage options (interior cubbies, and this is no joke, are limited to a wallet-sized tray at the back of the transmission tunnel), the Roadster might make a decent tourer.

That’s because the chassis is so stiff that the dampers can operate free from background interference, and they cushion the bodywork in a firm but controlled manner (at times, this car rides more sweetly than the Ferrari 812 Superfast). The car has immense reserves of stability and surprising agility, an element of which it owes to the four-wheel steering set-up.

On a related note, new to the Aventador Roadster is Ego mode, which allows you to mix and match the settings for the nicely weighted electrohydraulic steering, magnetic dampers and engine map. On British roads, we found a respective combination of Strada, Sport and Corsa to offer the best response, usability and, if you can stomach the deafening clack-clack-clack-boom that accompanies every lift of the substantially offset throttle pedal, bravado.

Less palatable is the transmission – that perennial Aventador bugbear. It’s an automated single-clutch manual that interrupts the power delivery to such an extent it erodes your patience and unsettles the chassis often. A dual-clutch replacement can’t come soon enough. 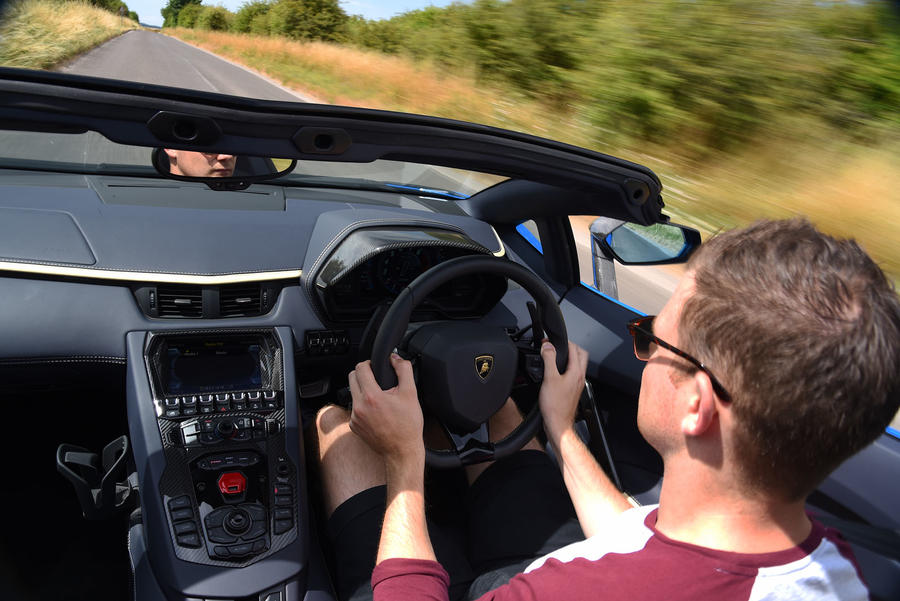 Other than its archaic-feeling gearbox, this car is let down only by the details and still hits all the right high notes – more so with the roof off.

The DAB radio reception is poor, the boot-lid tips water into the luggage compartment when you open it, the billet-aluminium filler cap is tethered in such a way that it can so very easily ping the bodywork and the reversing camera is indistinct, and there are further frustrations.

Overall, however, this Lamborghini is entrancing and charmingly classless in a way only the most outrageous supercars can be. In S guise, the Aventador Roadster is a vastly competent, satisfying steer and irresistibly theatrical, which is just as well for anybody whose buying criteria matches that described at the start of this review, because the Pagani is sold out. 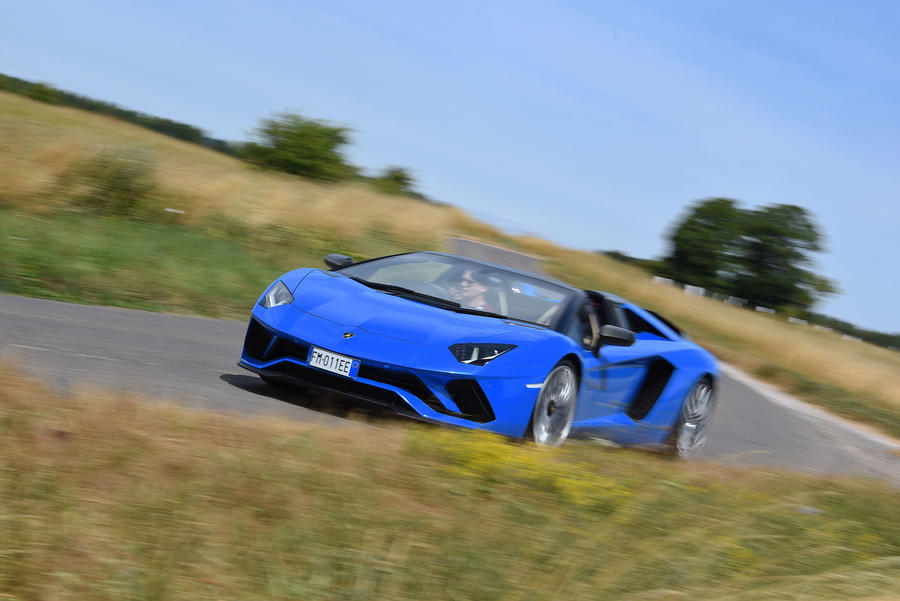 This is a great blog posting and very useful. SEO Expert Dubai

Strange firing order; Imagine how much power it would have if it used cylinders 5 & 9 as well

Must be a slow news week!

But the core of this week's edition? How many of these dream machines will populate our roads?  Perhaps a few hundred big BMWs and a handful of the others, mostly in the hands of press hacks or footballers...

How relevant is this to Joe Bloggs? We do NOT want a 'Reliant Robin newsletter' but a better balance of 'normal' v. 'dream' cars would be welcome... And while you think about it at Autocar, please ask your Site-master to rig the comments section so it can be read without going through the entire feature each time? Thanks!

But the core of this week's edition? How many of these dream machines will populate our roads?  Perhaps a few hundred big BMWs and a handful of the others, mostly in the hands of press hacks or footballers...

How relevant is this to Joe Bloggs? We do NOT want a 'Reliant Robin newsletter' but a better balance of 'normal' v. 'dream' cars would be welcome... And while you think about it at Autocar, please ask your Site-master to rig the comments section so it can be read without going through the entire feature each time? Thanks!

Never fear! There are now TWO articles on the next Corsa for your enjoyment. And perhaps you missed the ENDLESS stream of SkeatW appliances - er, interesting SUVs?