Somewhere that looks like nowhere particularly special, in a nest of workshops behind a petrol station forecourt on the A40 just to the west of Oxford, is a place where one of the most influential British cars ever designed - the original 1970s Range Rover - is being brought back to life.

Kingsley Cars is the kind of place you need to see in order to really believe that it exists. Proprietor Damon Oorloff has nurtured it from personal obsession to burgeoning professional operation over the past twenty years. There are now a number of firms in the UK that’ll offer you a ‘remastered’ Range Rover, but Kingsley is the sort of firm on which those other firms almost wholly depend because they do the really important structural restoration work, and know these cars top-to-bottom and inside-out.

Oorloff runs it with a mixture of passion, compulsion, thinly-veiled mania and expert skill for these much-loved aristocratic SUVs, and expects nothing less of the twenty-something technicians he employs. The dime tour would be worth ticketing all on its own, if only more car folk even knew where to go to find it.

Kingsley offers a number of restored and ‘restomodded’ Range Rover Classics, having most of what it needs to strip, weld, recommission, repaint and rebuild them on site; and it has just added this, a special model intended to avoid London’s new ultra-low emissions zone charge. 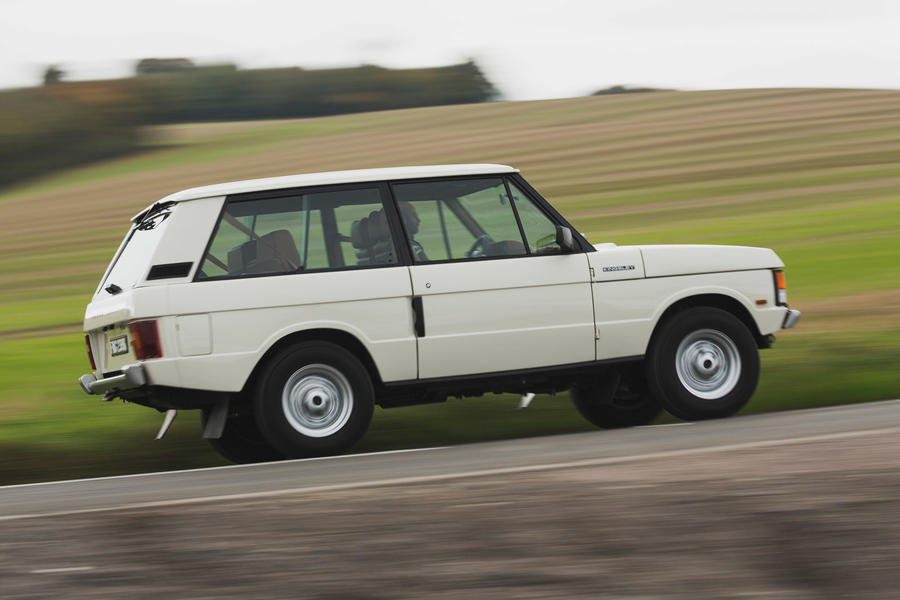 The ULEZ Reborn Range Rover Classic is a fully recommissioned three-door Range Rover based on a donor car originally registered before 1981 (so that it qualifies for a UK historic vehicle tax classification and thereby dodges the ULEZ levy). The price for one (from, ahem, £125,000 after tax) doesn’t include that donor car, but don’t worry if you haven’t got one; at last count, Ooloff owned more than 450 old Rangies of various vintages, so he can find you one pretty easily.

Rust has always been the biggest problem for these iconic 4x4s, but about half of Damon’s donor cars hail from South Africa where adverse wet weather is less of an issue. And that’s before his team even begins to go to work on one, of course. After disassembling it completely and stripping it back to bare metal, they blast-clean, treat and repaint the ladder frame and axles, and either replace or recommission the car’s bushings, bearings, roll bars, dampers and springs. The steel body and aluminium panels are stripped too, the former having any rotten sections cut out completely and replaced with brand-new, specially made sections of metalwork, and the latter being refurbished and repainted off the car for a flawless finish.

You can have any colour you like; bring your Barbour wellies along and they can probably scan and copy their particular shade of green. They use nylon washers to prevent galvanic contact corrosion; they seam-seal every weld; and rubberized underbody protection stops road filth from eating its way into the car from underneath. No Range Rover made was ever so well-prepared to survive a British winter as this.

Kingsley’s work on the interior of the car is a little less wide-ranging, but as long as you don’t mind feeling like you’re driving a classic Range Rover, that’s just fine. They certainly don’t do nothing. Our test car (one Damon had restored five years ago which he has been using on and off ever since, and whose condition speaks volumes about the efficacy and longevity of Kinglsey’s work) had a retrimmed dashboard and pillars, some new ambient lighting features, and a 700-watt touchscreen stereo with seven speakers, wireless device charging and Apple CarPlay. Not bad for a chassis originally registered in 1971.

The ULEZ Reborn doesn’t present you with a modern-feeling driving position; it’s high, bent-legged and just a little ‘authentically crooked’, but still pleasingly comfortable with it. Kingsley replaces the car’s original dustin-lid-sized steering wheel with a smaller one, which makes the ergonomic layout feel instantly more contemporary. Otherwise, the cabin all looks and feels just about right: not overly gussied-up, which Range Rover devotees will be pleased to read. Visibility is utterly imperious: skinny pillars, a huge glasshouse and that famous old ‘comand’ vantage point see to that.

The driving experience is likewise authentic and so characterful, but judiciously modernised. Even with Kinglsey’s optional ‘fast road’ suspension (lowered springs, firmer anti-roll bars), its quickened steering box, wider tracks and new alloy wheels, there’s plenty of original Range Rover dynamic flavour about the way the car floats, sways, shoulders and settles its way down the road. But it grips and corners, too; better than you’ll believe it possibly could, actually - but not so hard as to change the graceful, luxurious, slightly aloof character of the Range Rover, so much admired for so long.

The ride is nicely isolated from lumps and bumps; not perfectly smooth or quiet, but better-connected to the Tarmac than ever the standard car was, and feels idiosyncratic with it. You get a little bit of wind flutter from around the door seals at fast motorway speeds, and the odd gentle rattle from the car’s sliding rear windows in their frames over sharp edges. Nothing that oughtn’t come with the territory really, or that would stop you from using one of these regularly, just as Kingsley advertises and intends.

Three engines are offered. All are Rover V8s true to the car’s history, ranging from 4.0- to 5.0 litres in capacity and from 240- to 330bhp. Our test car had the mid-range 4.6: an engine that’s been made over with new crankshafts, pistons, conrods, camshafts, valves, cylinder heads, a new exhaust and a new Lucas fuel injection system, producing just under 270bhp and more than 300lb ft of torque. It has a wonderfully redolent, whooshing, burbling, airy-sounding combustive soundtrack, too, that’s part car, part powerboat, part hovercraft. If you’ve forgotten how V8 Range Rovers used to sound, the Kingsley Classic will be a wonderfully welcome reminder.

Those outputs weren’t enough to make the car seem fast compared with modern performance SUVs, but you wouldn’t want it to be: it’s got as much poke as it can use. Our test car’s four-speed ZF torque-converter gearbox was a bit clunky, slushy, and slow to kick down; but the 4.6 engine has the torque to carry its long intermediate ratios in any case.

You can really enjoy yourself at the wheel of this car, gently hustling a renewed old-stager along at a very modern pace, and drinking in a sense of occasion that feels hugely characterful and mechanically genuine, and really special: a million miles divorced from the low-effort, actively managed, perfectly sanitised experience of modern equivalents. 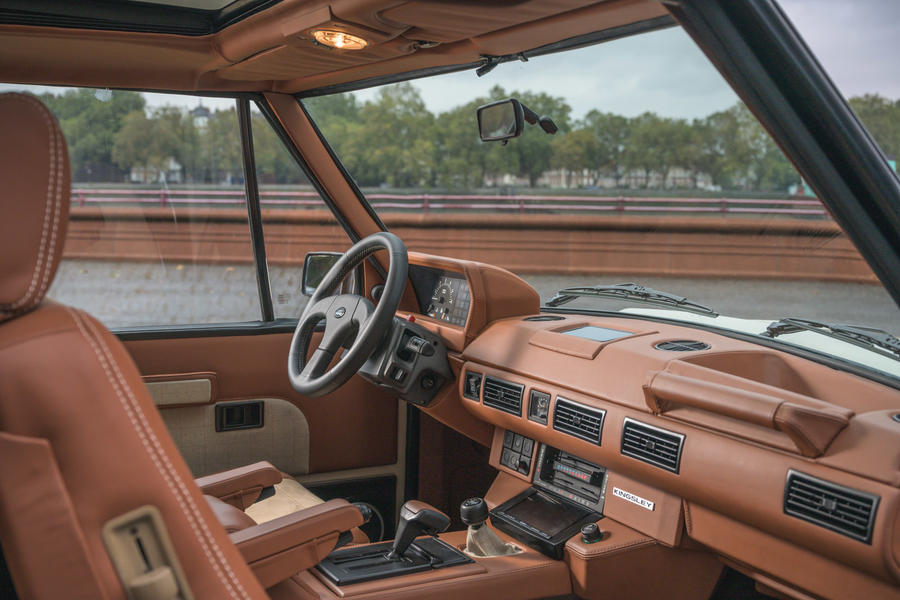 Whether you might then be able to construct a case to own a Kingsley Range Rover as a wealthy London-dweller who objects to paying £12.50-a-day to potter around the city in their classic 4x4, but who has the means to pay the thick end of £200,000 for that classic 4x4 in the first place, and who doesn’t mind getting less than 20-to-the-gallon while using it seems... well, a bit flimsy, doesn't it?

Thankfully, it’s a side issue. This car could never be the most responsible, rational or sensible choice afterall; nor really is it in the spirit of what the ULEZ zone is seeking to achieve. So what? If you can mentally square all that anyway, and the Kingsley simply saves you the bother of remembering to do one more thing, there might just be enough in it to convince you.

I guess the rationalisation would be up to you; but, were I in such a fortunate position, I’m not sure I’d feel the need to rationalise in the first place. This car is simply stunning; and while it might make a few pennies drop, the ULEZ justification encapsulates absolutely nothing about the commitment, affection, skill and care that makes it so.

The ULEZ workaround may be a handy thing to know; but if a ‘restomod’ this good couldn’t exist without it, something would have gone very wrong indeed in the world of very special, surprisingly usable, modernised classic cars. 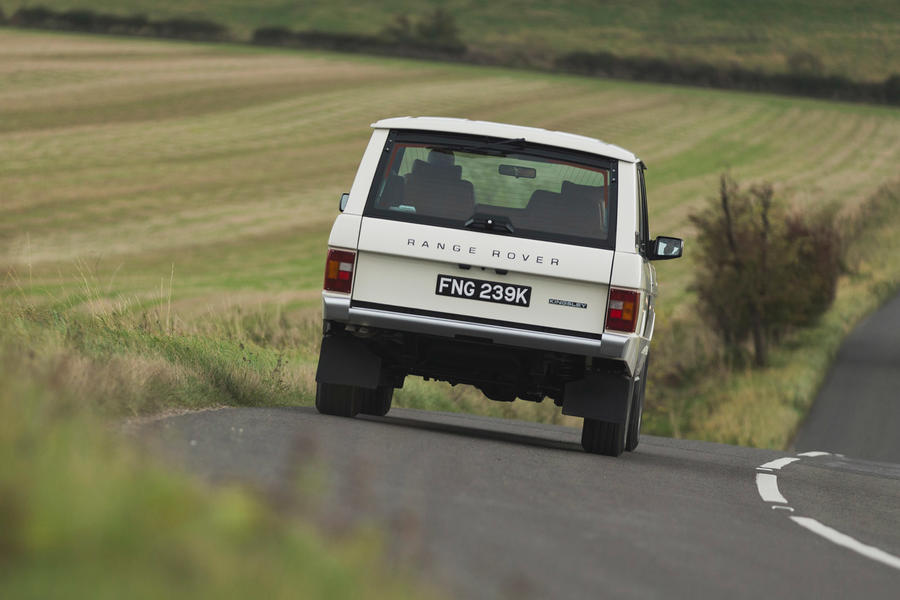 Does it cost extra to have the heater control Knobs fitted???

Excellent- just keep milking the stupid of their money. Laughable.

TStag 24 November 2021
The interior still looks good. You can see the connection between the latest model and this one even though they are decades apart
289 24 November 2021

You dont have to add £75k of options onto the car....personally I would go for a less 'over the top interior, and stick with the Rover lump.

Its worth buying because of its lack of massiveness - still fits the english roads, crisp looks and you dont look like a knob driving one (unlike the current crop of Range Rovers).

Cat see the point of 'EV ing' it. I imagine range would fall through the floor towing anything.