According to Kia, the Xceed is a Crossover Utility Vehicle (CUV) that slots between its conventional Kia Ceed hatchback and more traditional SUV models such as the Kia Sportage and Kia Stonic. At a glance it looks very much like a standard Ceed that’s been treated to a raised ride height and a smattering of tough-looking plastic body cladding in a bid to sate the appetites of buyers who seemingly can’t get enough of the whole off-roader vibe. So far, so predictable.

Yet look closer and you’ll discover that there’s actually very little carryover - in fact, only the front door skins are the same. The rest of the sheet metal is all new and the coupé-tinged Xceed breaks the measuring tape at 4395mm, which is 85mm longer than the Ceed. Much of that extra length is aft of the rear axle, resulting in a healthy 426-litre boot, which is 31 litres up on the Ceed. That said, the wheelbase remains the same, meaning there’s no more space for occupants - although the Kia is hardly cramped in this regard, easily matching most in the family hatchback class. As you’d expect, the Xceed is taller than its five-door counterpart, with the raised ride height delivering between 172mm and 184mm of ground clearance depending on whether the car is fitted with 17 or 18in wheels.

Mechanically the Xceed is less bold, with perhaps the most intriguing addition being the adoption of hydraulic bump stops for the front suspension. These have been added to boost comfort and control, allowing the spring rates at the front to be lowered by 7% (those at rear are dropped by 4%) - the usual trick on cars where the ride height and centre of gravity have been raised is to stiffen the suspension to counter the extra roll. This emphasis on comfort is further enhanced by the addition to the rear suspension crossmember of a new dynamic damper, which promises to quell both noise and vibration. The rest of the all-independent set-up’s hardware is pure Ceed.

It’s the same under the longer bonnet, with the choice of two petrol engines (turbocharged 1.0-litre or 1.4-litre units, the latter expected to be the biggest seller in the UK) and a single 1.6-litre CRDi diesel, all of which will be familiar to Ceed owners. As are the six-speed manual and seven-speed twin-clutch gearboxes, both of which drive the front wheels. The fitment of either Michelin (17in) or Continential (18in) summer rubber also confirms the Xceed’s road focus - it might look the part as an off-roader, but heading off the beaten track is not part of this car’s remit.

Inside, the Ceed theme continues as the dashboard and various fixtures and fittings are carried over wholesale, meaning a well-laid-out design but one without much in the way of flair - brightly coloured trim inserts aside. The only new features are infotainment related, with a crisp 12.3in configurable TFT instrument cluster available that Kia has named Supervision (a name that conjures up Gerry Anderson era Thunderbirds) and a new 10.25in multimedia touchscreen. This features crisp graphics, a customisable interface and a seven-year subscription to its connected services.

Arguably what’s most interesting about the Xceed is that Kia forecasts it to be the biggest seller in the Ceed line-up, finding more homes than the standard car, the Kia Proceed coupé and Sportswagon estate. 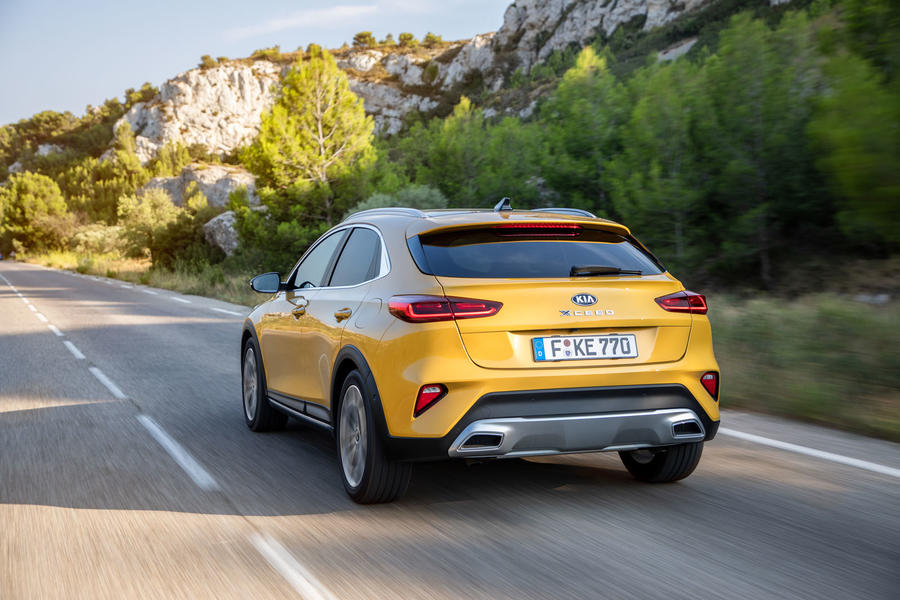 Despite its SUV pretentions, the Xceed feels very Ceed-like the moment you climb behind the wheel. Not only is there the same solid but slightly dour fascia, the moderate increase in ride height doesn’t translate to an off-roader's commanding view of the road ahead. In truth, there’s very little detectable difference, the brightly coloured trim inserts of our test car aside.

Given its remit, target audience and the claims made about its tweaked suspension, the Xceed doesn’t ride with the assured fluency Kia would have us believe. It’s softer than a standard Ceed - although that car is firmer than most in the sector - but there’s still an underlying firmness to the Xceed, particularly at low speed. On the plus side, it improves the faster you go and the Xceed does at least deal with bumps quietly, issuing little more than a muffled thump even when dealing with a particularly torn and scarred piece of Tarmac. How much of this is down to the hydraulic bump stops is hard to tell, but there’s no doubt the Kia almost always manages to round the roughest edges off the worst imperfections.

This sense of refinement extends to the rest of the car, which suffers from very little wind noise or, on the roads of our French test route, tyre noise. Even the engine plays its part, and while the 1.4-litre petrol sounds a bit gruff when worked hard, it never becomes an intrusive presence.

That said, with 178lb ft of torque at 1500rpm, this isn’t an engine you need to work hard, which is a good thing because it feels a little flat beyond 4000rpm, where there's little in the way of meaningful acceleration. Performance is brisk enough on the road and, if you make use of the reasonably precise six-speed manual gearbox to shift up early and surf the turbocharged torque, the Xceed is a reasonably effortless performer, mushy clutch action aside.

Of course, this isn’t a car that’s going to get you hot under the collar at the first hint of a corner, but it’s far better than you’d think. There’s a fluency to the chassis as it carves through corners with impressive poise, and its electrically assisted steering has been recalibrated for quicker response and provides a feeling of keen agility as you pitch the Xceed into a bend. It doesn't offer much in the way of feel, but it delivers decent weight and natural rate of response as you wind lock on.

There’s a fraction more body roll than in a standard Ceed, but the front clings on gamely and there’s a satisfying sense that the front and rear axles are sharing the load equally as the car slices cleanly through the apex. Get too enthusiastic and the nose will wash wide, the ESP gently chiming as the torque vectoring finally flounders. Up to that point, however, the Kia is surprisingly biddable, feeling more nimble than the higher-riding crossover competition. 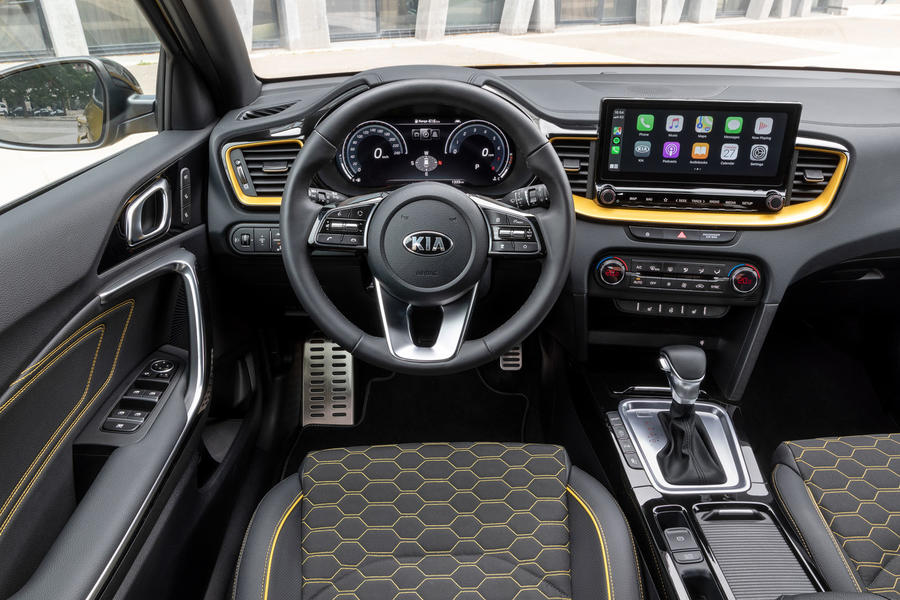 The incredible march of the SUV in all its forms continues, and the Kia Xceed is better than many. By recognising its role as a road car first and foremost, it manages to deliver on the road thanks to its well-executed dynamics that blend handling composure with decent refinement.

Crucially, by combining more distinctive looks, a bigger boot and an improved ride with the current Ceed’s improved quality, interior ambience and infotainment, the Xceed makes a case for itself as practical, well-equipped and hassle-free (think of that seven-year warranty) ownership proposition. That said, at around £2000 more than the equivalent Ceed, the Xceed does lose some of the standard model’s value-for-money appeal. 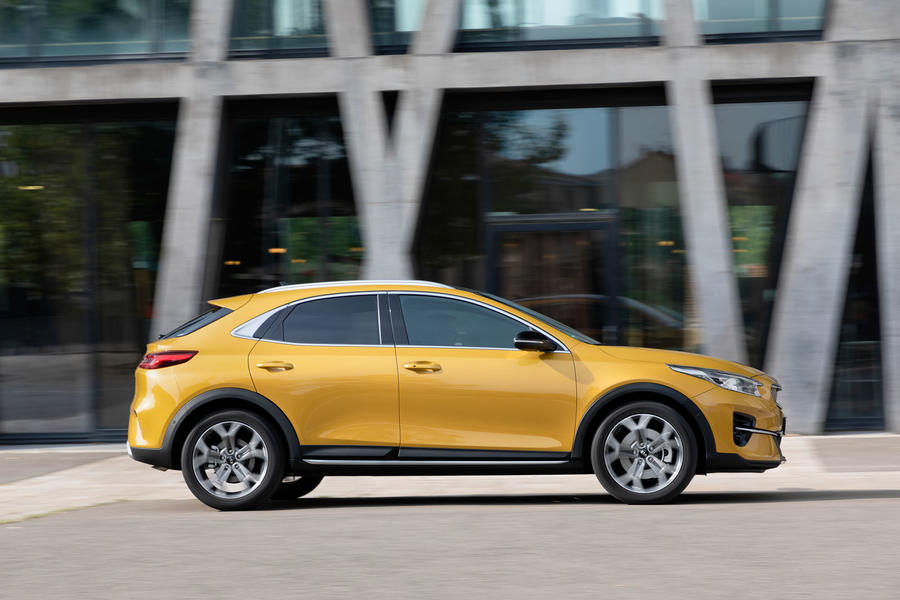 love to see your post, please visit to our website below everything about escorts service near you.

This looks really great. Moight consider one for the next car. Hve sat in the Kia Pro Ceed as well as the new e-Soull and the quality and dash all around in them is top notch. The dash features pleanty of squishy soft plastics and they are far more stylish noth inside and out compared to say a boring VAG product. My sister recently bought a new car and looked at the Seaat Ateca but in the end bought a Hyundai because she is a busy Mum who just wanted a nice stylish car and one with a proper handbrake not them silly electric ones.

Kia & Hyundai styling are too

VAG? All of their cars have a similar theme. Skoda and SEAT SUVs are very similar. I am not disagreeing with your point, just think there could be a better example. Peugeot and Citreon at the moment would probably be better.

You clearly do not understand the different sectors that Toyota & Lexus operate in and if you did, you would not expect this to exist between K & H...