Hongqi has traditionally been the car maker for the top echelons of the CCP. Founded in 1958, it’s often referred to as the Rolls-Royce of China. But while its L series is still very exclusive, with the L5 limo available only to those with the right connections, it now enjoys growing commercial success with its H series.

Last year, the FAW-owned firm sold almost 200,000 cars, with most analogous to models from Germany’s big three and Jaguar. In 2018, FAW hired former Rolls-Royce man Giles Taylor to oversee Hongqi’s design direction. The Brit was responsible for the Rolls-Royce Cullinan, and certainly there are echoes of that in the first design under his stewardship: the E-HS9 electric SUV. Sales have already commenced in Norway, and more European countries are likely to follow. 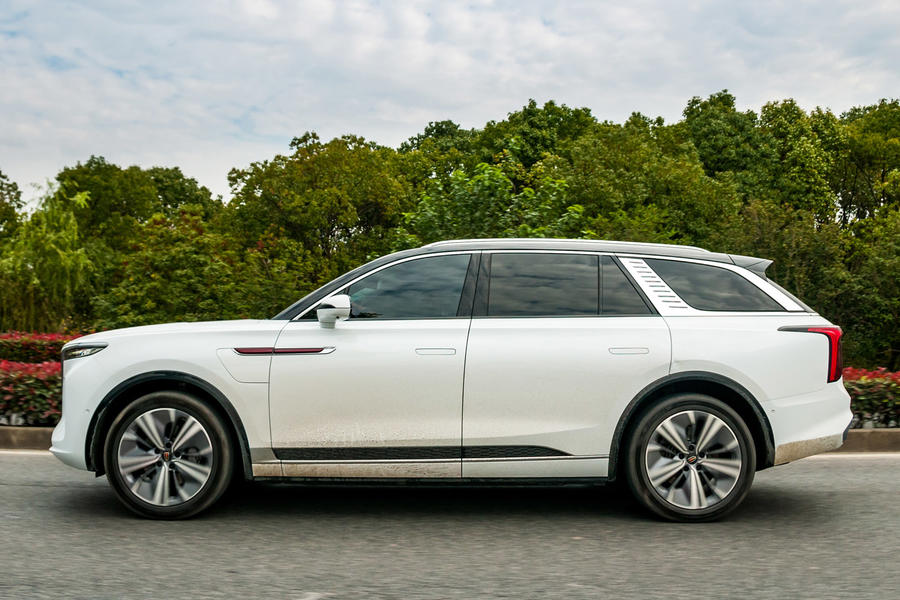 There’s nothing understated about this car, from its 5209mm length and 2010mm width to its imposing grille. The lines overall are largely conventional, with nothing giving away its EV nature. Press the open button, though, and you get light theatrics, and when it’s charging, the chrome strip on the C-pillar acts as an indicator using LED strips.

The interior is visually impressive, but the material quality doesn’t live up to expectations. The leather of the quilted seats is synthetic in parts and the padding around the centre console cubbyhole doors is too thin. Equally, the wood veneer on the centre console appears to be fake.Nonetheless, the electrically adjustable seats are comfortable and have heating, cooling and massage functions. These, together with the air conditioning, are controlled via the touchscreen that stretches from the centre console up to the air vents.

Indeed, screens dominate the dashboard. The driver gets a digital dial display (using buttons and scrollers on the steering wheel, you can change the driving mode and what data the display shows). In the centre is a very text-heavy infotainment touchscreen (with three columns of Chinese text to navigate through, it was very difficult to use). And in our test car, the front passenger gets their own entertainment screen.

The top trim level for Norway gets you six seats, but the Chinese flagship is a four-seater. The second-row seats are similar to those in the front but lack massaging and gain an armrest. Climate controls and device-charging ports are mounted on the back of the centre console. 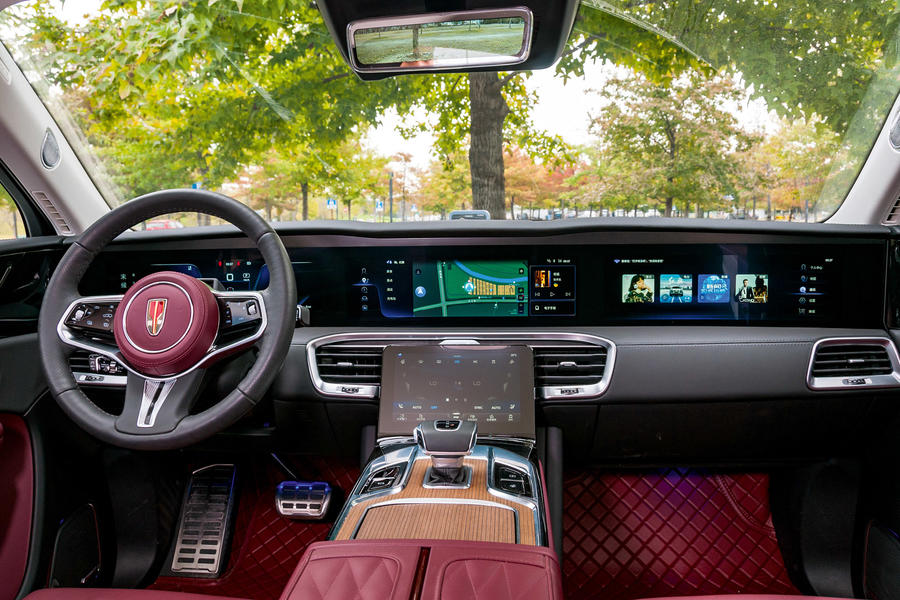 Getting in and out of the very rear isn’t that easy, but once you’re in, head room is reasonable and leg room (dependent on the positioning of the second row) acceptable. Boot space is good, even when the third row is in use, and there are buttons to electrically lower and raise the bench. While the headrests automatically fold on the way down, they don’t extend when raised. Opening pockets in the doors and ambient lighting, however, reveal good attention to detail.

On the road, you notice the E-HS9’s bulk from the sheer acreage of the bonnet and the lack of four-wheel steering when you’re manoeuvring into a tight parking space. You would expect such heft to really help with energy recovery, but regenerative braking is barely noticeable even in its highest setting, so one-pedal driving isn’t possible.

Acceleration is reasonable, given the car’s size, and the air suspension gives a smooth ride. Push the throttle pedal, though, and the nose rises.

Unlike in most Chinese cars, the steering isn’t overly light and there’s an element of precision to it. 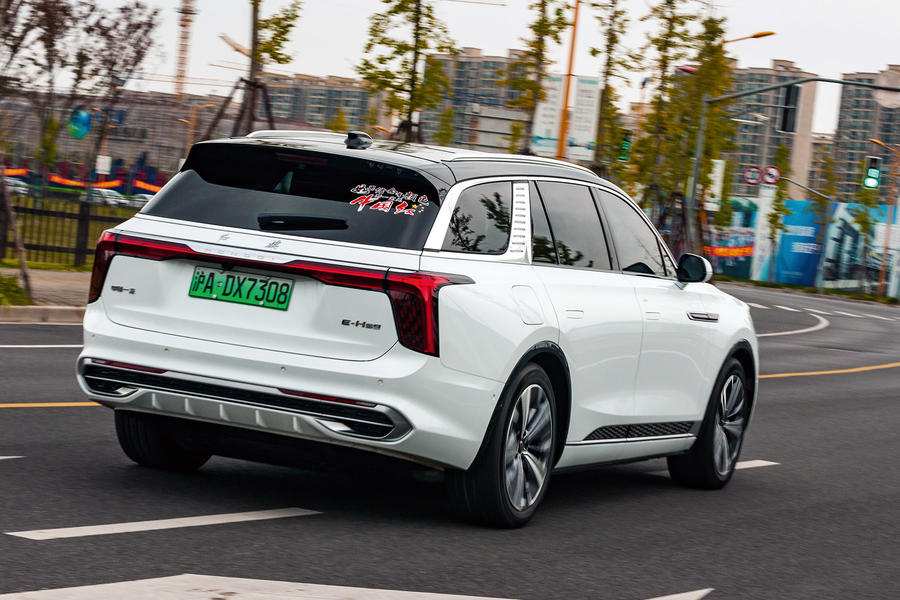 There’s no doubt that the E-HS9 is a head-turner: it has strong presence. Furthermore, you get a lot of car for your money (about £74,000). The devil, though, is in the detail. While it’s luxurious and in many ways quite cosseting, the material quality isn’t quite up to par, from the soft-touch plastics to the seats. Some equipment omissions are also surprising: a head-up display is available only on the f lagship model, for example.

As a luxury barge, the E-HS9 just about delivers, but it offers little excitement as a driver’s car, despite its respectable acceleration.

Early indications suggest that cars built for Europe will iron out some of these issues, and certainly Hongqi is on the right lines with the E-HS9. 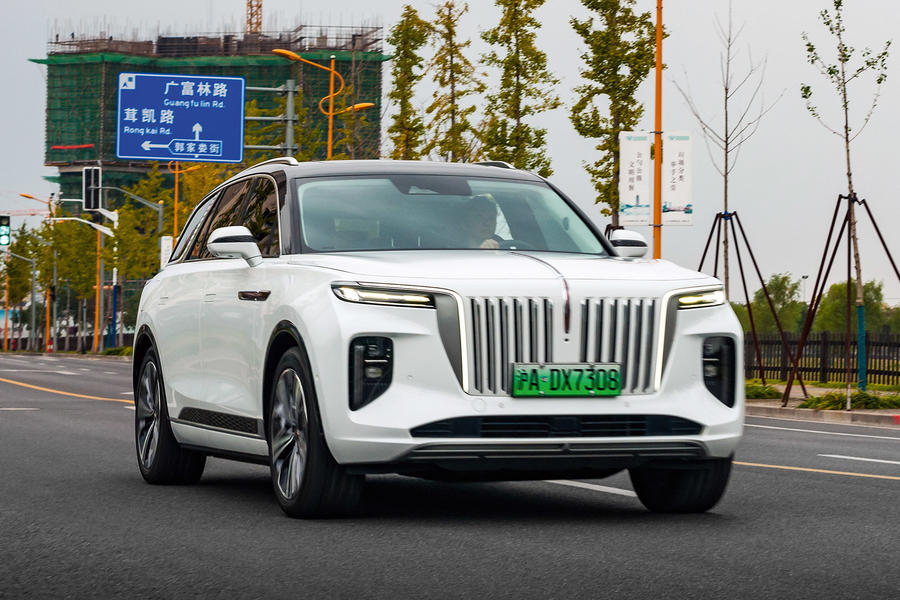 Log in or register to post comments
MaxTorque 2 December 2021
What an absolute waste of earth's resources to come up with this garbage on four wheels.
Smh
shiftright 1 December 2021

They would defintely have to rebrand if they want to seel this garish mastodont in the US. It reads as "Honky", which is a derogatory term for whites used by blacks (in the US).

For that money, you would get a fully worked through car, one that will have a spares back-up for years to come. Just wonder how much slave labour went into making it?