From £12,9357
Share review
Honda has facelifted its practical Jazz to make it more appealing to a younger audience and fitted it with a new engine, but is it enough to rival the best superminis in the class?
Share
Open gallery
Close

The Honda Jazz has always been something of a Tardis in the supermini market. Its exterior size is pretty standard for the class, yet opening the door reveals a frankly cavernous interior.

It’s this unrivalled level of practicality in the supermini segment that has enabled Honda to sell more than seven million examples of the Jazz since the model was first launched back in 2001.

This emphasis on spaciousness has been carried over with this, the facelifted, 2018 model year variant.

In the past, the Jazz has stereotypically been the reserve of, erm, more mature drivers, but Honda has treated this updated version to a range of sporty exterior tweaks in what we can only imagine is an attempt to make it more appealing to the 'yoof'.

That means gloss-black 16in alloys and contrast stitching in the cabin, among other changes. The most notable update, though, is the availability of a 1.5-litre i-VTEC petrol engine, which was under the bonnet of the car we sampled. 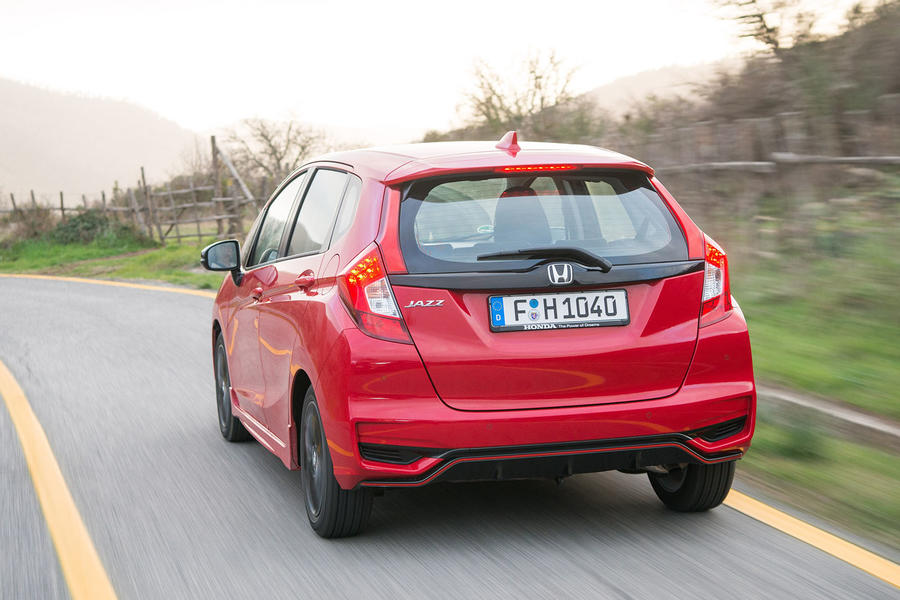 Despite Honda’s best attempts to pitch the revised Jazz as a more sporting option in the supermini market, the reality is that rival offerings continue to outshine the Japanese contender dynamically.

It rides well with its MacPherson front struts and rear torsion beam suspension ironing out pockmarked road surfaces, but there’s noticeable roll through the bends and the electromechanically-assisted steering is largely devoid of feeling. A Ford Fiesta, Seat Ibiza, or even a Volkswagen Polo would all be more fun on a windy stretch of road.

The 1.5-litre i-VTEC engine is also a bit of a sticking point. It’s not that it feels underpowered – there is 128bhp and 114lb ft of torque on tap, afterall – but by God, does it make itself heard when you press on. That lump of torque is also found at 4600rpm, meaning you really need to work the six-speed manual gearbox to keep it on the boil. Be warned, your ears won’t thank you for doing so, either.

That’s not to say that the Jazz is without any redeeming features, though. While the Japanese supermini may not be renowned for its dynamic abilities, it has always impressed with its superior levels of interior space and practicality – and this is a theme that’s continued in this latest model.

Given the Jazz’s relatively small size - it’s a shade under four metres long – the cabin feels enormous, particularly in the back. Rear passengers will find a huge amount of legroom, even when sat behind a taller driver, and the Honda’s boxy shape means there’s a commendable amount of headroom, too. Boot space, meanwhile, comes in at 354 litres (that’s more than a Polo or an Ibiza) with the seats up, and can be extended to 897 litres with them folded down.

What the cabin won’t do is blow you away with its material richness – it’s all scratchy plastics here – but at least it feels like it’ll stand up to any abuse that young children might (read: will) level at it. Our test model came with contrasting red stitching on the seats, too, which helped add a touch of flair to an otherwise largely drab space. Chunky controls for the heating and ventilation are within easy reach of the driver, as is Honda’s ageing Connect infotainment system, which isn’t particularly responsive, and is further let down by dated graphics. MirrorLink is available, though, which allows you to, well, mirror the screen of a compatible device - such as a smartphone - on the 7.0in display. 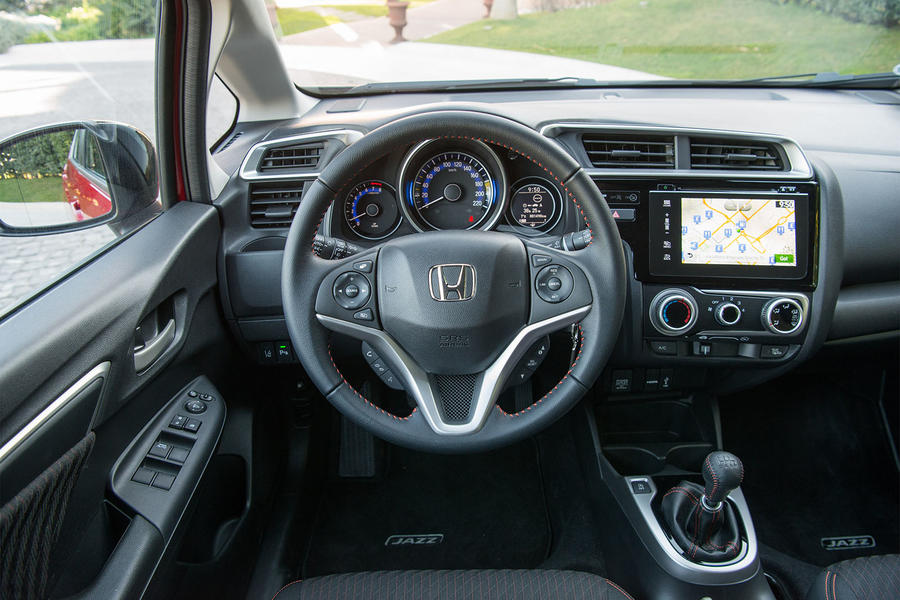 Should you invest your hardearned money in one depends on what you really want from your new supermini. If you’re after something that’s big on interior space, and will easily seat four adults in comfort, there’s really not that much out there that’s more up to the task than the Jazz short of, say, a saloon or small estate. However, if an entertaining drive is just as important (which we’re sure it’s going to be), the Jazz is outclassed by rivals such as the Ford Fiesta, as well as our current class-leader, the Seat Ibiza. 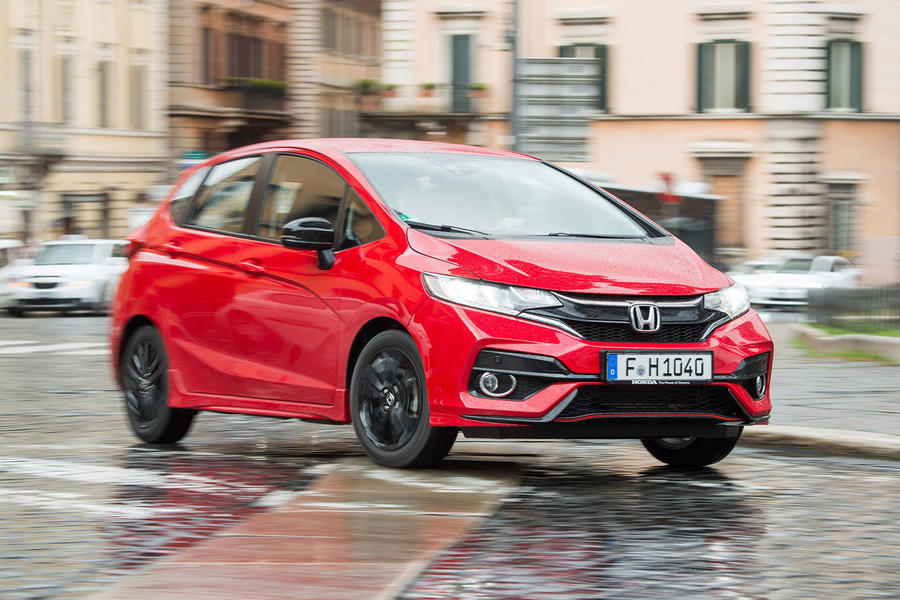 Dare I say it? Using the not very scientific approach of what I read recently, the Jazz always seems to come near the top of reliability surveys. That must be important to a lot of people.

2.0 NA ICE in biggger cars is just about ok these days if the downsides are reflected in a lower price but at over £17,100 with maxium soso torque at a sky high 4600rpm doesn't sound great, there's far better out there, even for hard of hearing OAP's!

I cannot see who would buy this.

Too many non-essential pensioner aids.

Not really a proper hot hatch.

Mind, it has reliable repeat customers ...

... who like it exactly way it is. However Honda appears unlikely to be able to widen it's appeal. As even with that reasonable acceleration that requires reeving the engine to find. It's not in the least sporting -- so it continues to entice the same people as before, i.e. people who want a small car that is practical and spacious. There are actually customers who want exactly that -- hence a third gen. of that Jazz.

Nope, the target buyer is a

[/quote]
I take it you don't live in a crowded city where parking spaces are hard to find. Unsurprisingly they tested this in Rome where 90% of cars must 4 metres or less, so when (if) you find a parking gap that has been left vacant you are unlikely to be able to park anything bigger.
Guess what's the biggest market for Smart Fortwo? And for the 1st and 2nd gen Mercedes A-class? You got it. And if you want a car with manageable (read: supermini) footprint, then a mini MPV is the only way to go. The A-class has become a low, stretched, cramped thing so it won't work (they must have found that in most areas people were after the badge and sporty image rather than tardis-like packaging). The Note is gone, so are the Idea/Musa duo, the B-Max, the Verso S; the Venga is facing the axe. The C3 Cactus and 500L are a bit long and portly, in the end it's the ix20 or the Jazz.

I was hoping they’d dropped

I was hoping they’d dropped the 180bhp engine from the Civic in it. That would have been more lively. Lots to like about Hondas bar their touchscreens, which are awful.

Presumably the fuel and CO2 figures are measured using the new WLTP test which is strange because those for the Civic diesel are clearly from the old test?  Really there is no point in quoting such figures without reference to the test procedure used. But at first sight this car is neither fast nor frugal.

Didn't this Jazz used to have

Didn't this Jazz used to have a glossy glass screen for the climate controls? Well done to Honda if they've reverted to easy to operate dials, more manufacturers should do the same.

Agreed with the european decline...

...of the Jazz, but its main market remains the USA (under the *Fit* badge.)

This pseudo-sportivisation of a (very) practical mini-van seems to me also a futile attempt to revive the euro-sales, whose target were lately focused mainly on the feminine clients.