Gunther Werks’ headquarters is white and clean, spacious and cool.

What adorns the walls depends on which area you’re in: some car stuff, of course, but also expensive bottles where customers receive their cars and sci-fi models elsewhere – an apparent enthusiasm of Peter Nam, founder of both Gunther Werks and a company called Vorsteiner, which makes wheels and high- end carbonfibre components.

There’s an element of cartoonish fantasy to Gunther Werks’ cars, too – although technically they don’t make cars. You buy a stock 993-series Porsche 911 Carrera 2 (1994 to 1998) and they take it and remaster it, creating the 993 Speedster Remastered by Gunther Werks – the sort of naming convolution that keeps intellectual property people happy.

But let’s call it the Gunther Werks Speedster. And let’s call it a restomod born from the idea of ‘what would a money-no-object 993 look like?’

Nam and co think it would look like this; a bit like if Porsche had built a Porsche GT3 RS version of the 993, last of the air-cooled 911s. There will be 25 Speedsters like this, following 25 coupés, whose production/modification run is now drawing to a close. 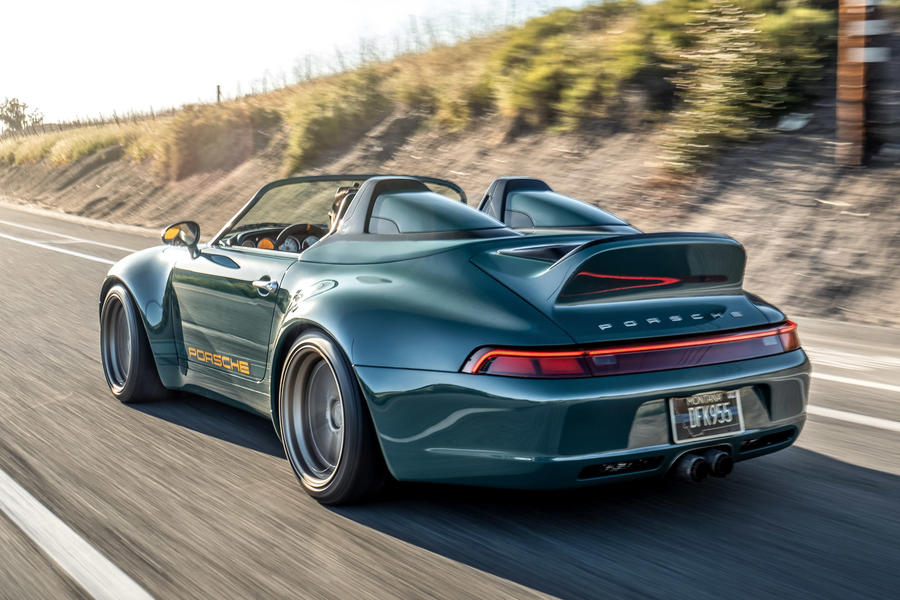 Gunther Werks can help you source the donor 993 coupé or cabriolet; ideally a car with a clean title with no accidents, probably costing £40,000 to £60,000, and there are enough in the US that they’re not going to run out. Then the work starts.

The most obvious thing is a widening of the front track, for which the suspension already has mounts from racing homologation. Then a fair degree of weight reduction and adjustment goes on. The air conditioning and power steering pumps are moved from the back, where they were driven by the engine, to the front, and made electrically powered.

New body panels are made, all of them but the doors from carbonfibre. A wider front bumper allows one rather than two oil coolers and for them to face the airf low rather than be perpendicular to it.

Gunther Werks (and Vorsteiner) is a maker rather than an assembler of things, so aside from engine and transmission, which quickly head off for work, it does all of this itself. In all, Gunther Werks says 250kg comes out for the car to sit at 1235kg.

Weight distribution is 45:55 front to rear – rather more evenly balanced than a regular 993 as part of Nam and co’s attempt to alter the conventional old-911 driving style, which features a light front end that needs careful speed management on corner entry and a lively corner exit.

That the two ends of the car do different things and operate at such different rates and frequencies can confound some chassis engineers, who love old 911s but still don’t make easy sense of them.

This is meant to balance that out; and to help the turn- in more are 11in-wide front wheels inside 295-section tyres. Whereas old 911s are “slow in, fast out, now it’s fast in, fast out”, says Nam. On Gunther Werks’ 993 coupé, you could specify a neatly integrated roll bar, and I think I would have, because I like torsional rigidity, which is of course higher in the coupé than it is in the Speedster.

Nonetheless, there’s strengthening in the front bulkhead, similar in the rear bulkhead high behind the driver, and double-skinned sills, which leave the Speedster’s torsional stiffness higher than a standard 993 coupé’s. 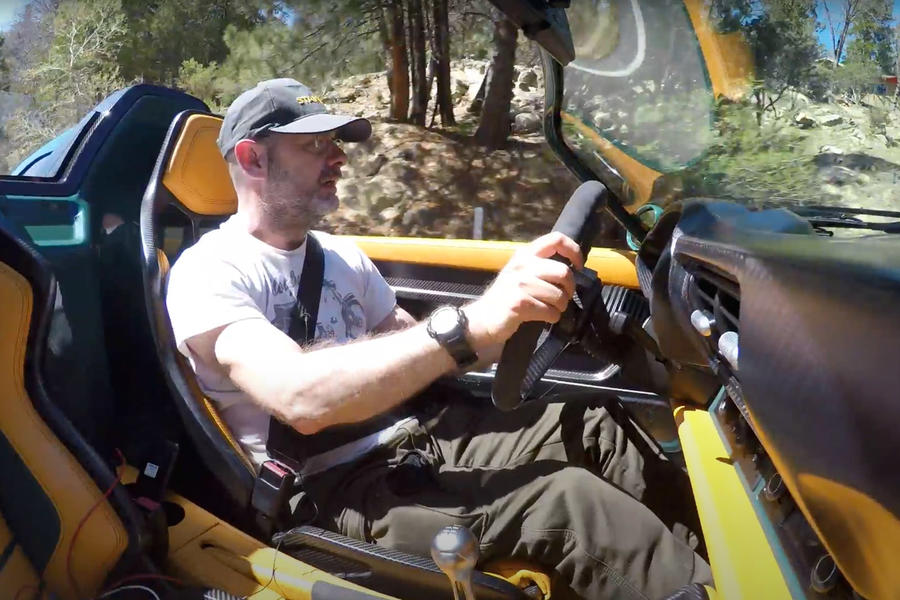 It gets a Gunther Werks-trimmed interior, which is beautifully done to an exquisitely high standard.

There’s no roof option and a carbonfibre windscreen surround for the 964-era Speedster windscreen. But owners of this £650,000-plus car seem to have enough metal to choose from that they can wait for a dry day.

The luggage compartments and engine bay get equally clean-looking overhauls. When the flat six returns, it’s a 4.0-litre engine making 435bhp for a healthy 352bhp per tonne.

But crucially, Nam says, it’s a car that’s more engaging than current supercars in which “you have to be doing 120mph to feel anything”. In this, “we’ve taken an analogue car and used technology to enhance the driving experience”. Let’s see.

They send the car away on a truck and I follow, catching up with it as it’s unloaded in the car park of a shopping centre near some hills, which happily are home to one of the greatest roads I’ve ever driven.

The steering wheel is small, round, carbonfibre, unadorned and Alcantara-trimmed; the pedals’ weights are all hefty and perfectly matched; and the gearshift is long and smooth but precise. There’s a great linearity to everything it does.

It’s a driving position from where you can do some good work, so it feels. The only things to worry about, Nam tells me, are the appalling turning circle and that the 30mm nose lift won’t automatically fall again at speed, although the ride is so terrible with it raised that you probably won’t forget.

Meanwhile, the retro stereo system houses car Apple CarPlay. So with that, power steering, air conditioning and anti-lock brakes, there’s an agreeable level of tech. On a short motorway cruise away from the car park, the Speedster reveals itself to be quite habitable and comfortable enough; and when I get to the amazing road, it’s electrifying.

There’s a two-state suspension set-up, Comfort or Sport, the latter too firm for the road (it’s meant to be) and the former well controlled.

Throttle response is wickedly sharp. This is a world-class engine with a single-plate flywheel that revs and revs, so Nam suggests to take it to high revs and leave it there.

It’s geared so that fourth, I’m told, would run out at around 120mph, so I’m comfortable in second and third, singing around in low gears and staying there, where it seems perfectly happy.

There’s an exhaust valve switch that lets things become a bit boomy if you’re cruising, but if you’re not near anyone else, it opens up more volume. Apparently you can hear the exhaust more in the Speedster, the engine more in the coupé.

My natural tendency is towards coupés rather than roadsters for sports cars, due to the rigidity issue, and you can detect a certain amount of chassis shake in the Speedster, because although it’s stiff for a convertible, it is a roadster, after all.

But it’s absolutely a sports car. Turn-in is wickedly sharp and you don’t have to moderate the front and then worry about the tail afterwards;

it just turns incredibly quickly at the front and then the rear follows faithfully, all of apiece and all at once, in an exceptionally rewarding way.

The steering has medium weight and speed and picks up feel easily, and for all of the sharpness of the turn-in, the car never feels unstable. There are bags of mechanical grip.

Things get a little blustery around the buttresses in a crosswind, but in sheltered locations where the wind is only running along the car, it’s a fairly breeze-free experience – and a thoroughly engaging and rewarding and addictive one. 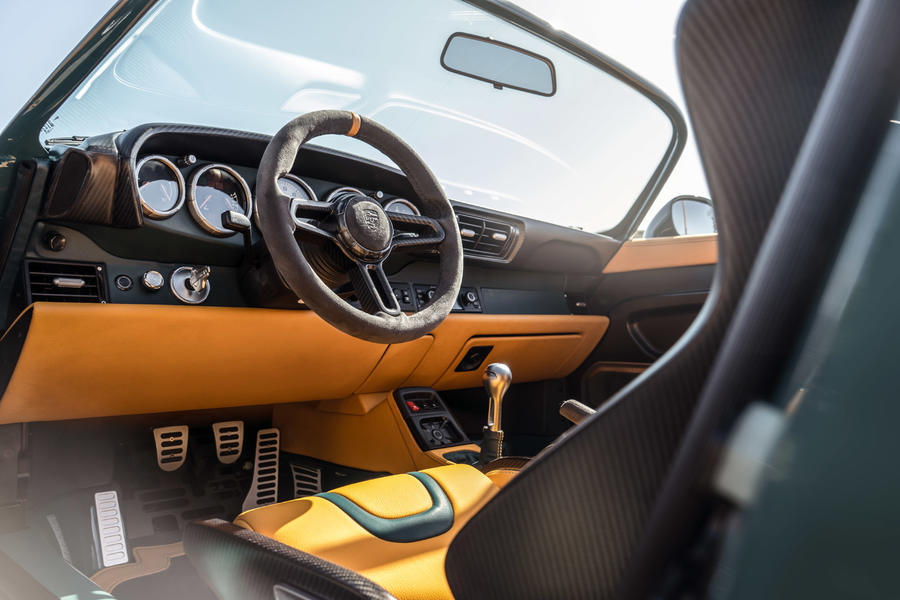 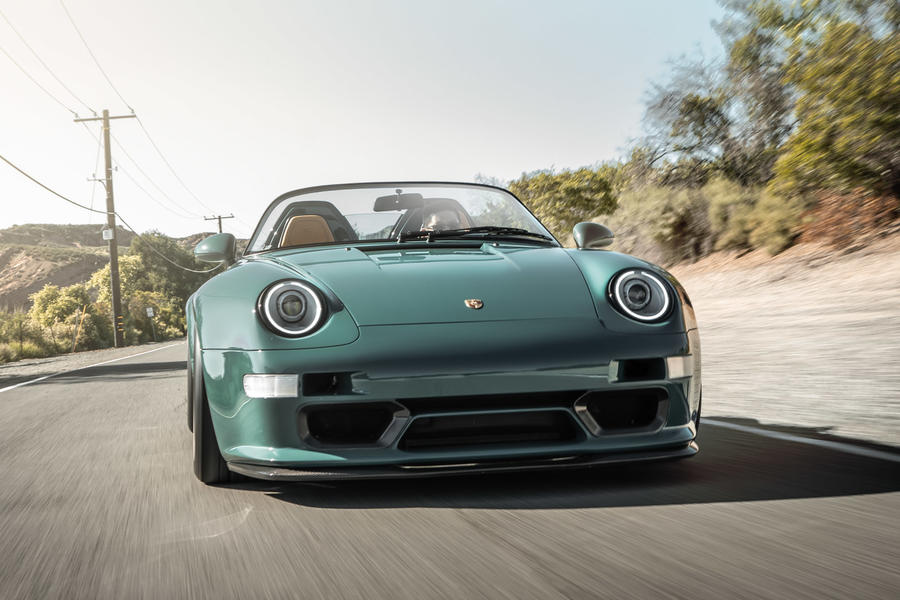 I usually get onto roads like these on road trips or foreign drives and find that I’m in a crossover, rather than a rear-biased exotic sports car with an engine to die for, fabulous turn-in and responsive steering. But this time, I got all of those things.

The only thing I think is notably short here is the rigidity that a roof brings, but if you want the character of a Porsche and all the intimacy and purity of an air-cooled 911 along with the balance of, dare I say, a Porsche Boxster, it’s all here.

Add the jewel-like care of a bespoke car and I think you’re looking at one of the most compelling cars that I’ve driven in a long while.

C'mon, at least it is not electric!

And where are you going to go in this thing? You'll look like a fucking micro-dicked tosser.

Anton motorhead 29 April 2022
Hmmm, it looks like fantastic craftsmanship, but that's if for me. Even if I had the money I'd not consider it for one second. Some will and are willing to cough up. Good for them. Have an awesome weekend.
View all comments (7)