This is the facelifted version of the sixth-generation Ford Mustang, driven here for the first time on British roads following its international launch to the press in March.

You’ll have clocked the lowered profile of a bonnet that now sports a brace of meshed vents, the more piercing headlights and perhaps the new ‘aero curtains’ in the front bumper. Their job is to guide the airflow neatly across the front wheels, and you’ll now find them on everything from the Lotus Exige 410 Sport to the new Audi A6.

The Mustang's front splitter is now bigger, too, because the one thing the Mustang always lacked was a square jaw, and there are quad-exhaust tips for the big V8 model.

It’s a bit angrier, then, which is what people have wanted since the car arrived on the scene in 2015. For further evidence that those who buy this famous machine have no aversion to the limelight, consider that a third of early orders are in the Fury Orange paint job seen on our test car. And while we’re talking statistics, four in every five cars is expected to be a Fastback, which is no surprise, given that the convertible loses the classic silhouette.

There’s also expected to be a fifty-fifty split between manual and automatic transmissions, and so the biggest change to this car is the addition of Ford’s new 10-speed auto ’box. Replacing the wholly unsatisfactory six-speeder, it’s still a torque converter but uses an integrated turbine clutch to save weight and improve the packaging.

The new ratios occupy a similar spread to the old ones, though, meaning smaller steps and quicker, smoother shifts, and those shifts are instigated by new direct-acting solenoids. That means this transmission can skip from, say, sixth to second in a single motion. 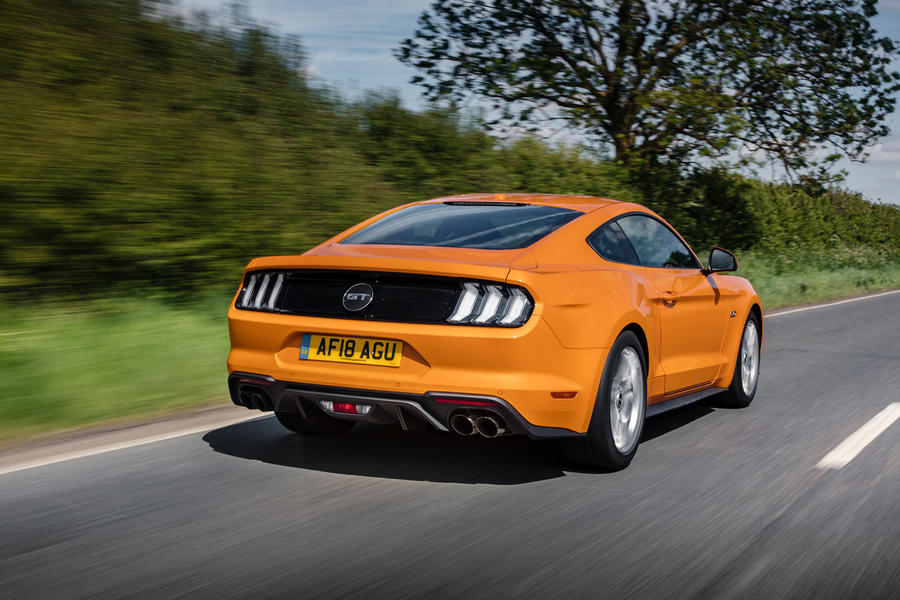 You know where you stand with the Mustang – it’s going to feel old-school to a degree, for which you’re going to like it in the main.

This facelifted model is a bit different, though. Its instrument cluster is now entirely digital, for a start, with a 12.0in display whose colours can be customised. The readouts also change depending on which mode you’re in, starting out looking just a bit staid in Normal but ramping up to a vast horizontal tachometer in Track and even ‘Christmas Tree’ lights in Drag Strip. Yes, that’s Ford’s name for launch control.

Elsewhere, the interior remains as it was: vast, with chunky switchgear, and seats more accurately described as ‘chairs’. And remember, the sixth-generation Mustang also remains the first of its kind to be offered in right-hand drive, which is nice.

Buy a Mustang and you still get a choice of two engines – either a turbocharged 2.3-litre Ecoboost that’s now been tickled to develop a little more torque at the expense of outright power or the 5.0-litre V8 whom for many owners will be a no-brainer. With a manual gearbox, of course.

Going for the four-cylinder Ecoboost unit will save you about £5500 up front. Throttle response is fine and 350lb ft means you could never call it ‘slow’ with a straight face. However, if you consider a bellyful of effortless shove a core constituent of the Mustang experience – and, frankly, we do – it’s hard not to find it a bit gutless through the mid-range. That it becomes so breathless at higher crank speeds merely seals its fate as second fiddle to the V8.

Those eight cylinders remain likeably lazy in their waffling, ever-so-slightly-flatulent power delivery, which is up from 410bhp to 444bhp – an exact match for BMW's Competition Pack-equipped BMW M3 and M4. With the 10-speed ’box, the Mustang's 0-62mph time drops to 4.3sec, which the car feels good for as it roars off the line, powerboat-style.

That time is achievable only with that new automatic ’box, which for cruising is an inoffensive device, upshifting gently at roughly 2000rpm and sidestepping second gear altogether thanks to those fancy solenoids. In the car’s most relaxed mode, barely have you pulled away and you’re already into sixth or even seventh, and for some, that’ll be just dandy.

However, getting the most out of the engine requires either knocking the gear selector into ‘S’ or pulling one of the plastic paddle shifters mounted on the steering wheel. The former raises the default upshift point to around 3000rpm but will allow the crankshaft to spin to beyond 7000rpm if you’re in enough of a hurry.

Upshifts don’t exactly match those of a Porsche PDK unit for precision, but neither are they required to in a Mustang. They’re adequately quick and seamless, although downshifts can sometimes jerk. The transmission’s incessant hunting for just the right gear can irk, mind.

In fact, it’s a layer of fussiness the Mustang could do without, because this chassis doesn’t half like the road to be smooth. A generous wheelbase and good natural balance allow the car to settle into a decently composed gait. It’s one that can give you a false sense of security, even, because it’ll permit to you carry considerable speed through most corners while using generous levels of body roll to keep the contact patches squished into the road.

Were British roads predictably surfaced, that’d be the end of it, but they’re not, and so the Mustang comes unstuck where most European sports car simply wouldn’t. The biggest offender is vertical control, which, whether concerning either the passive or £1600 adaptive Magneride suspension, handles a solitary input – a ripple in the tarmac, say – decently well but quickly falls behind the roads when those inputs arrive rapid-fire.

Progress can come a little cantankerous, and so you quickly learn to identify the Mustang’s natural rhythm on a given road and stick to it. Do so and it’s an undeniably pleasant, composed steer.

Elsewhere, there’s also now a ‘My Mode’ that allows you to collate various settings. This is the sort of thing that should be mandatory on any performance car, with numerous switchable parameters, so good on Ford for introducing it. 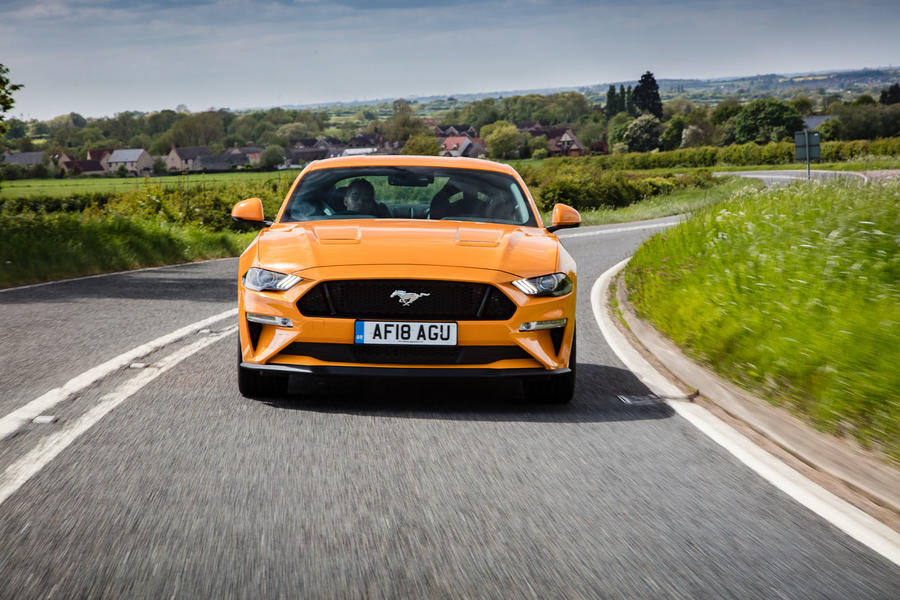 Well, why not? If you’re already considering a ’Stang and like the cosmetic changes, this facelift is all good news. The active exhaust in particular now gives the car a blaring, saw-toothed aural signature to match the muscle of the engine and the beefcake coachwork. It feels as though the Mk6 Mustang has grown into its skin.

If you’re really quite seriously considering a Mustang, you’re also unlikely to mind that dynamically it’s some way off, say, the BMW 440i M Sport. The Ford’s footprint may no longer dwarf those of its rivals, but it still feels a portly device, and that's a sensation that never leaves you. The Mustang can, however, prove surprisingly sharp on the right road, and so consigning it solely to ‘cruiser’ status would be an injustice.

Via more about this

Via more about this