From £33,7056
Ecoboost-powered Mustang is more affordable and cheaper to run than its V8 sibling, but is nowhere near as charming
Open gallery
Close

Put plainly, it’s the low fat, skimmed-milk version of the Ford Mustang; a car that’s as synonymous with V8 engines as Donald Trump is with ridiculous haircuts and Oompa Loompa-inspired fake tans.

However, the key role the V8 plays in forming the Mustang’s identity hasn’t stopped Ford from offering its iconic pony car with a 2.3-litre, four-cylinder Ecoboost engine. It’s the same power plant that was available when the sixth-generation Ford Mustang first came on sale back in 2015, and despite the fact that it’s closely related to the engine found in the ballistic Focus RS, at the time it never really won us over on the charm front.

Now, we’re sampling it in the new 2018 Mustang, paired here with Ford’s new 10-speed automatic gearbox. Along with that newly-available transmission, the facelift brings with it a number of subtle tweaks intended to broaden the ‘Stangs appeal.

There’s a greater focus on safety, with features such as pre-collision assist, pedestrian detection and lane-departure warning all being fitted to help boost the 2015 car’s two-star Euro NCAP safety rating, while a digital instrument cluster adds a more modern twist to the interior.

The chassis has been fettled, too, with revised dampers improving the Mustang’s surefootedness, while the rear suspension has been stiffened up courtesy of a new cross-axis joint. Those willing to part with £1600 can also spec an adaptive MagneRide damping system for the first time. 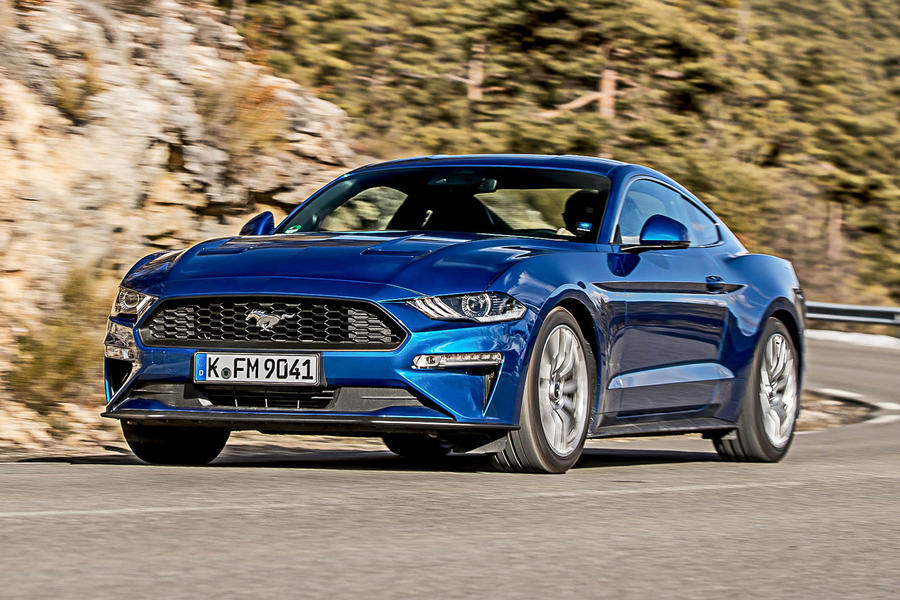 Having hopped straight out of the Mustang GT 5.0 V8 and straight in the Ecoboost model, the latter was always going to feel like it was playing second fiddle to an extent. That said, while it may not be able to match the V8’s 4.3sec 0-62mph sprint time, the four-cylinder Mustang still doesn’t feel particularly slow.

Where it quite obviously loses out next to its V8-powered stablemate, though, is in the soundtrack department. That ‘Coyote’ V8 is one of few remaining naturally-aspirated V8s still available, and the breadth of noises it expels from its quad tailpipes is one of the Mustang GT 5.0’s most endearing features. It’s deep, bassy and menacing at low-revs, and approaching volcanic when you really put your foot down and rev it out. The Ecoboost, meanwhile, makes a largely forgettable noise. There’s a noticeable level of synthetic aural trickery being piped into the cabin to help improve things, but this can only ever go so far.

Still, it’s a smooth and responsive unit, and thanks to the presence of the twin-scroll turbocharger its torque is much more accessible than it is in the V8, being available from 3000rpm as opposed to 4600rpm. The new 10-speed ’box works well enough, and will drop down a handful of ratios with little delay when you need it to - making overtaking manoeuvers that much easier. Our only gripe with it, and it is a relatively small one, is that it can be a bit slow to respond when you use the paddles to manually shift up a gear on full throttle.

On the smooth roads of our southern France test route, the Mustang generally rode well. There was a bit of brittleness at lower speeds, but out on the motorway it was pliant and comfortable, with only a small amount of road noise from those 19in alloys penetrating the cabin. It doesn’t handle with quite the same accuracy of, say, a BMW 420i (although the Mustang will leave it for dead in a straight line), but there’s decent weight to the steering, if only little in the way of feel. Despite the Mustang’s relatively large proportions - it’s a shade longer and wider than the BMW - those MagneRide dampers do a decent job of containing lateral roll through bends, too.

The interior isn’t the last word in upmarket appeal, either, thanks to plenty of scratchy black plastics, but it’s by no means offensive. Recaro bucket seats look the part and are both comfortable and supportive; you’ll just need to be prepared to part with £1,700 to get them, and forgo the standard seats’ heating and ventilation functions in the process. 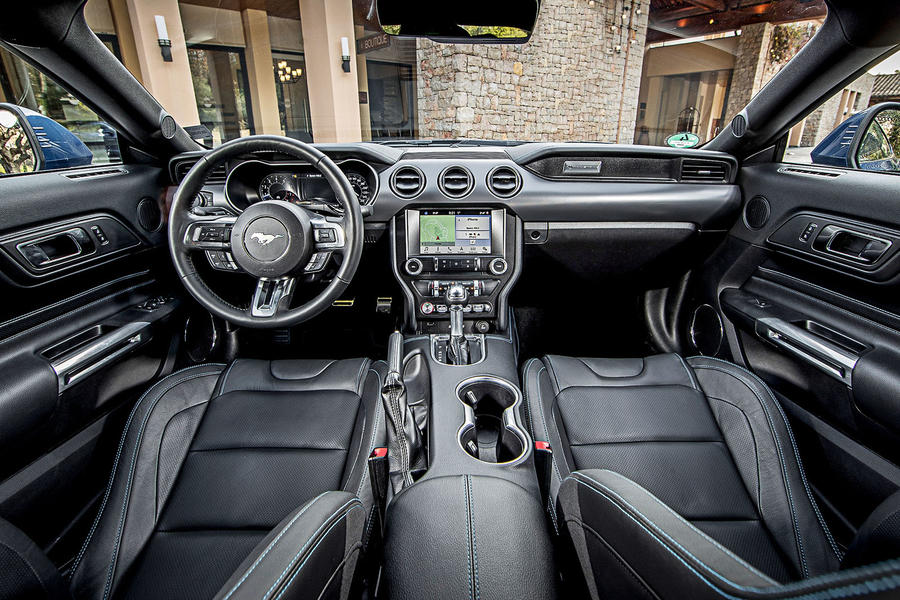 There are two main advantages of opting for the Ecoboost over the V8. For one, prices for the 10-speed Fastback model start at £37,595 as opposed to £43,095 for the comparable V8. Secondly, with a claimed combined economy figure of 30.7mpg, it drinks less fuel - if only to the tune of 7.4mpg. And that’s not really a huge amount, is it?

Don’t get us wrong, the Mustang Ecoboost certainly isn’t a bad car in isolation. It’s reasonably quick, looks great and offers handling that’s keen enough to enjoy on a winding road. But considering the sheer amount of extra character you get with the V8, if it were our money, that’d be the one we’d go for every day of the week. 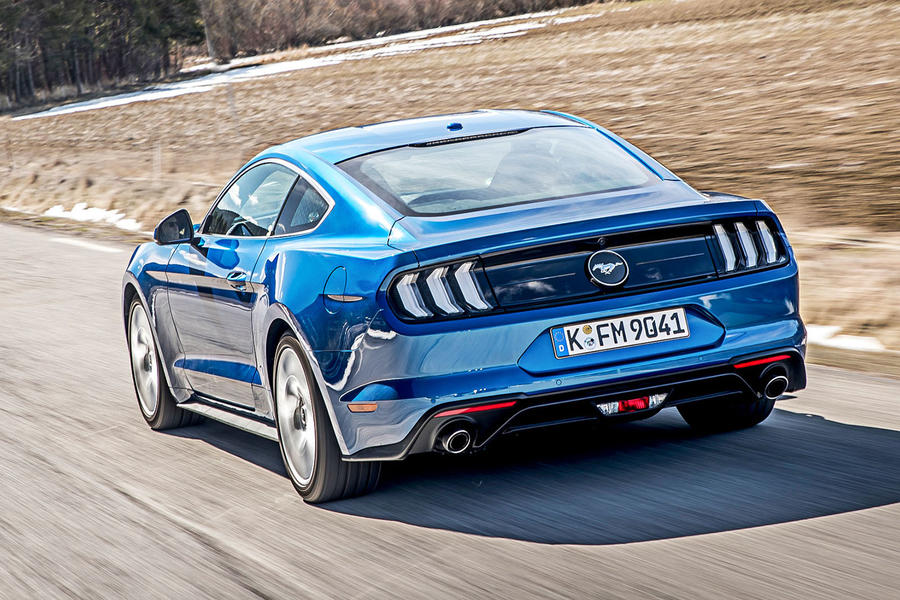 Not sure how the foul mouth political comment relates to this "CAR" review.

Ford are aware fuel prices in the UK means not every buyer can afford to have a fuel tanker following them when they enjoy the V8 performance.I would suggest the 7MPG difference would be more like 10-15MPG dependant on the foot on the go pedal.I would also say the buyer of a Mustang buys on emotion and under the bonnet reality to your financial situation.

From what I've read

The 50/50 sales in the US are because rental companies buy the turbo.

The turbo depreciates faster than the GT in the US but the opposite in the UK.

The V6 is no longer available in any country.

The difference in BHP is due to Euro regulations.

Still think the Mustang is more interesting then the same BMW, M-B and Audi I see everywhere these days.

your opening statement has revealed the magnitude of your journalistic brilliance.take your tree huggers hairshirt with the "i love jeremy"badge off,and try and use whatever objectivity you have left and do your job