From £17,9308
All-conquering Focus has impressed with every version yet tested – and now we sample a mid-range diesel with the automatic gearbox. Is this the one to go for?
Open gallery
Close

Legend has it Enzo Ferrari once said that with a Ferrari you buy an engine, and the rest you get for free. Perhaps the opposite is true of the all-new, fourth-generation Ford Focus – you buy a great chassis, and it doesn’t really matter what else there is.

That’s somewhat flippant, of course, as early tests of different versions are revealing quite different characters depending on the car’s propulsion and trim – yet with that great chassis thankfully remaining a constant.

The latest version of the Focus to arrive at Autocar HQ for test is this 1.5-litre diesel version. It’s the mid-range of three diesels – a 94bhp 1.5 sits below this 118bhp version and a 148bhp 2.0-litre above it. You can have it with either a six-speed manual or eight-speed automatic gearbox, the latter tested here.

Whatever gearbox or version of the 1.5-litre diesel you go for (and, let’s be honest, a diesel Focus still holds huge appeal for so many car buyers who cover the kinds of distances such five-door hatchbacks have always relished), you do get the ‘lesser’ of the two rear suspension options – a torsion beam, the multi-link reserved for the 2.0-litre range-topper. 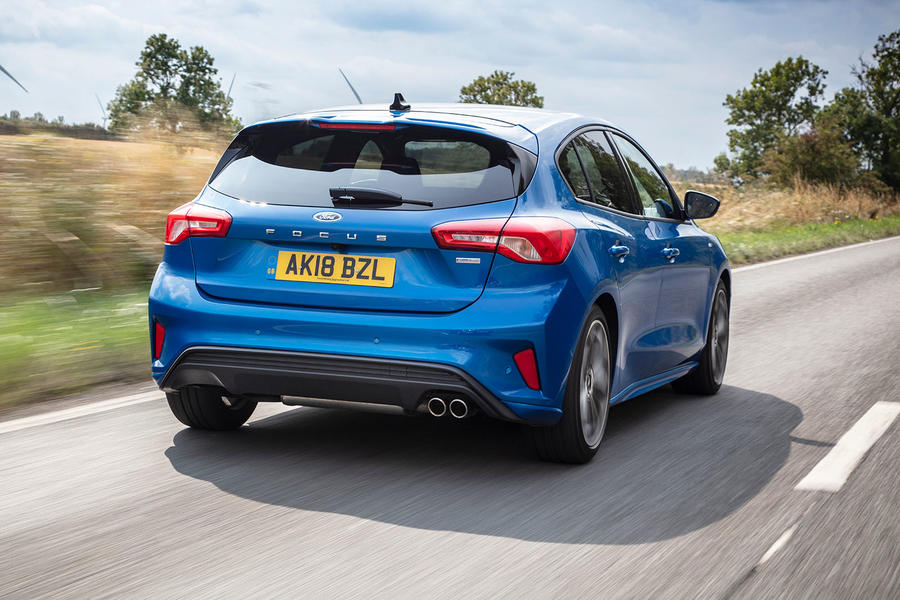 There’s little in this Focus that blunts the driver appeal we’ve already become so fond of in other versions. It rides, handles and steers like no other rival in the class can match, even with the supposed poorer-relation suspension, yet other versions of the Focus do get a bit more out of the chassis, the extra weight of the diesel engine over the nose noticeable, alongside the less crisp throttle response that’s exacerbated a touch further through the automatic transmission.

Whereas the chassis is excellent, the powertrain is adequate. Performance-wise, you’ve got to really plant your foot to make brisk progress, that plant bringing the full 221lb ft of torque on the overboost function into play. Otherwise, responses are a bit sluggish at low revs, and the turbo has really got to be spinning to keep momentum down the road.

The engine is a bit loud and grumbly at low revs on start-up, but then what diesel in this segment isn’t? Some of that din is still audible at higher speeds, though, with a background hum that’s evidence of an engine working harder than a larger-capacity one might.

That’s reflected in the economy too. We struggled to get over 45mpg even on long runs. The 2.0-litre diesel has marginally worse economy on paper, but I’d bet that wouldn’t translate to the real world.

That mid-40s figure is, of course, with the auto box, which suffers quite the economy hit over the manual version, both on paper but more pertinently in the real world. Claimed is 64.2mpg in this ST-Line version (78.5mpg in the manual), and less in the real world as we’ve discovered. Given that the auto costs £1400 more than the manual, and CO2 emissions are also higher, there’s little case to be made for this powertrain for either peppy performance or better economy – you’re effectively paying more for less.

Shame, as the auto is a smooth shifter with the habit of always being in the right gear when the engine is warm and you’ve moved off from stationary, at which point you don’t have to concern yourself with one of the more pointless stop-start systems in recent times. To get the stop-start system to kick in when you need to give a rather firm press of the brake pedal. Think quite a bit harder than you think you need to, and then push a bit more. Odd.

Elsewhere, the interior’s a bit plain still and familiar from the previous Focus, even loaded up in the sporty ST-Line trim, which also brings with it some bigger alloys and a sportier suspension tune that all combine to make you care a bit less about the cabin when it’s so nice to experience in other ways through the way it drives.

Another five-grand of options were fitted on our test car, much of them to do with active safety features that have a rather nervous, jumpy habit of making the instrument binnacle light up like a Christmas tree in November – a bit too early and presumptuous. 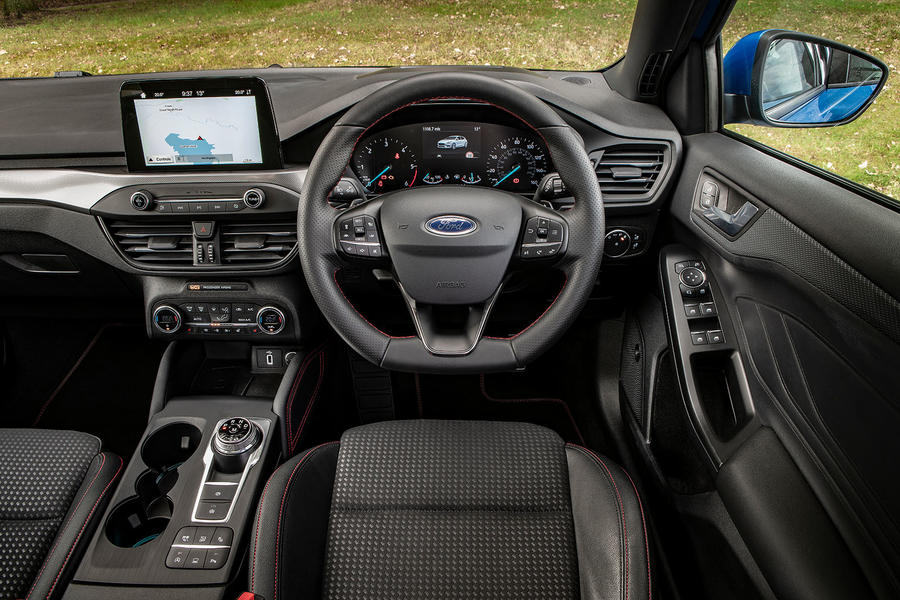 It’s a three-star powertrain with a five-star chassis, a chassis that other versions of the Focus simply get more out of. The main reason for buying a diesel is nearly always the big economy that comes from big miles, yet that’s not true with this automatic version.

The nature of ranges of popular, big-selling cars like the Focus means there will always be imperfect versions, as well as more complete ones, in trying to appeal to as wide an audience as possible. With this case of this mid-range diesel auto, the best of the Focus lies elsewhere. 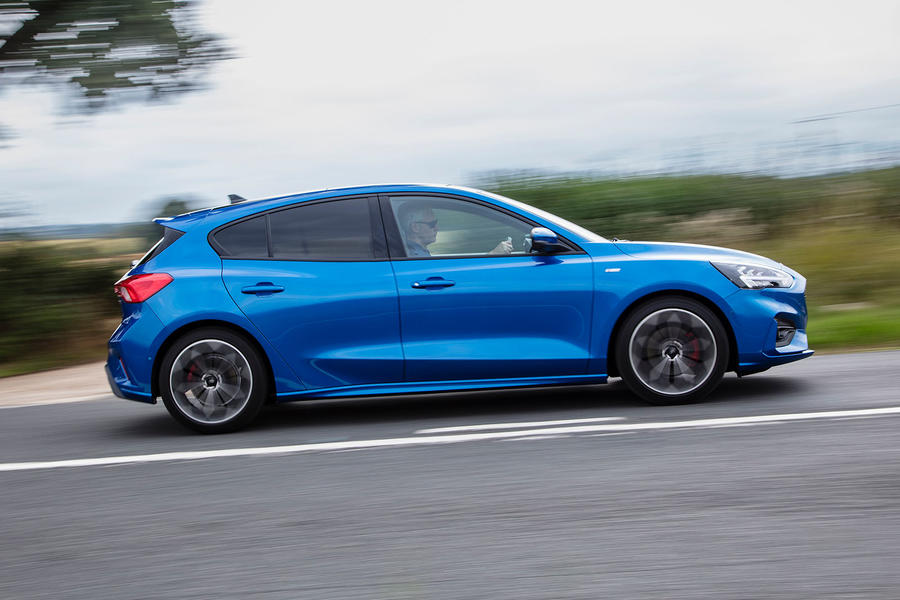 A bit disappointing is this

Without reading the article

I will answer the question, no it is not the one to go for.

I will answer the question, no it is not the one to go for.

Hilarious, are you a target market typical (non) reader then?.

At £26500 you're into Mondeo money, where you will get a much larger car. Buy nearly new and you're heading for the top of the spec range.

I have found that all the diesels I've owned give better performance and mpg once they have 30k miles on the clock. Usually there is about a 10% improvement in fuel economy after that, and much more low speed flexibility.

With the proposed demise of the Mondeo, I have looked at the Focus as a possible next car, but it's too small to get a mountain bike in without taking it to bits. Too small also for 4 people and 4 sets of climbing gear.

45 mpg is pretty good if the car has been driven hard by a road tester. Real world and post 30k miles that should translate to around 55mpg.

Finally, how does a 2.0litre diesel with a manual stack up against a 1,5 automatic?