From £17,9309
Focus retains its position as the best-in-class to drive – spec dependent – while adding extra space, functionality and connectivity
Open gallery
Close

It’s still ‘the one’ to drive, say the people who’ve created the new Ford Focus. Although obviously they don’t put it quite like that: they reckon it’s the most "confidence-inspiring, intuitive and rewarding driver and occupant experience of any mid-size family car in Europe".

Thing is, there isn’t just one mid-sized family car, but three or four, really: a normal five-door hatch, a posh version (the Vignale), a wagon and a tall Active version.

And it doesn’t stop there, either, because there are two different rear suspension options – one independent, one not - because some markets don’t care so much about vehicle dynamics, and a torsion beam is a lot cheaper than what Ford has variously called a control blade or a short-long-arm suspension over the years. Then there’s the option of adaptive dampers too. Oh, and ST-Line trim that lowers the standard ride height by 10mm.

Imagine, then, that in all this, Ford has managed to reduce the number of orderable Focus configurations by some 92% over its predecessor. There’s less overall choice, but it’s a broader, more defined choice.

It sits on Ford’s new ‘C2’ platform, which is apparently quite flexible, but not in the very literal sense: it’s actually torsionally more rigid than the old Focus and lighter too: up to 88kg, like for like.

There’s a line-up of petrol and diesel engines, with a mild hybrid to follow. Newest and spangliest are the 1.5-litre units, of which there are petrol and diesel. So far I’ve driven the petrol, which is a new engine, in 179bhp form, though there’s a 148bhp one too. It’s a three-cylinder; you’ll find it in the Fiesta ST too.

Finallly, for now, there’s the 1.0-litre three cylinder petrol, of 84bhp, 99bhp and 124bhp, which has been slightly revised. I’ve tried the 124bhp petrol.

Both cars I’ve tried were fitted with six-speed manual gearboxes, while the 1.5 had independent rear suspension and, being an ST-Line X (£25,300), rode that bit lower. The 1.0 was a Titanium spec (£21,550) and rode on a torsion beam. Both had 17in rims. Neither had the adaptive dampers. 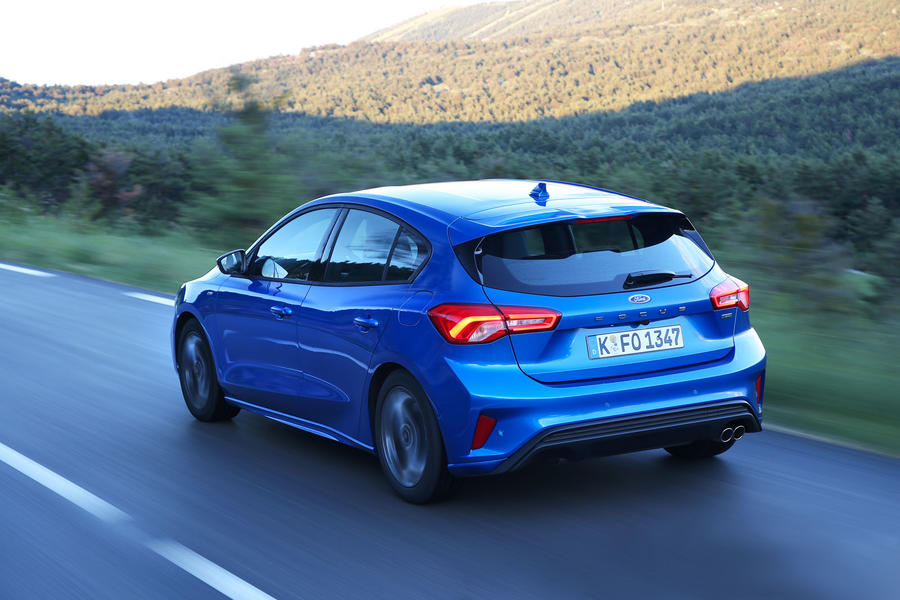 Spacious, for one thing. Head room is good in the front, the steering wheel adjusts widely and that there’s an electric parking brake means there’s more room on the centre console for oddments storage.

The dashboard sits further forward than in previous Foci, while in the back there’s really generous leg and head room and, because the rear window line extends a long way back, visibility is good and it’s airy too. The boot’s a respectable 375 to 1354 litres but there’s a small load lip. The rear seats go almost flat.

Perceived quality is mostly good. The upper surfaces are, anyway, although some of the lower plastics and those in the back are specced to a price. It’s designed functionally enough. There’s a touchscreen atop the dash but, while the button count has been slashed like a DFS sofa price, the stuff you’d want to be still a button is still a button – the volume controls, heater controls, and so on.

There’s probably still not the clinical efficiency of a Volkswagen Golf to the way things feel. But on the plus side, there aren’t half a dozen other cars off the same platform that feel exactly the same bar the badges, either.

What has always marked a Focus out, mind, is the way it drives. We’ll start with the 1.5 179bhp, and with the fancy rear suspension because that’s what a Focus has always had. In this form, with a manual ’box (that’s new too, incidentally), it’s a 1369kg car – a pretty Golfy kinda weight. The torsion beam would lose around 10kg.

And it drives really nicely. As in: best-in-class nicely. The old Focus probably retired as still just about the best car in the class to drive and this improves things. It does things in that Fordy way. The ride has both a suppleness and composure to it; it’s really well controlled and athletic, but never harsh, and it doesn’t really matter how many inputs you throw at it at once, it always seems to have something in hand. The steering is a touch lighter than I can remember (you can firm it up, though only a bit, via a drive mode button), but it’s accurate and precise, if not giving the last word in communication.

The three-cylinder, 1.5 engine is quiet and smooth too. This is an unusually big power output for a non-diesel, non-outright sporty car, although it only emits/consumes 124g/km/51.4mpg on the new WLTP fuel cycle, so it’ll be more popular than a car like this would have been five years ago. There’s cylinder deactivation under light loads, but I can’t feel it happening. And the six-speed manual’s slick too. It does that thing that the best manual ’boxes do, when you get the stick pulled halfway into its plane and an over-centre weighting takes over and pulls the lever home. It feels like it’s on your side, that way.

More likely the bestseller, though, is the 124bhp 1.0 Ecoboost we’ve also tried, but in Titanium trim. The torsion beam rear end is less successful – comfort is still pretty good, but there’s more bounce, less innate control. Ford’s engineers say some of that will be down to the fact that it’s the 10mm higher ‘normal’ suspension, rather than the ST-Line’s, and it’s still good: knocking on the top cars in the class. But it’s a poorer relation – literally and figuratively – to the more sophisticated set-up. Higher trim levels, the Vignale and wagon all get the IRS. We’ll have a go with the adaptive dampers soon and update you.

Still, you can do all this, and, as Ford says: “Driving quality in itself isn’t enough to sell cars. If you’re not up to scratch [in terms of communications tech], you’re not even considered.” And to be fair, it’s an area where Ford is pretty well delivering too; all models get strong levels of active safety kit, lane-keep assist is standard, and only the base version doesn’t get a touchscreen with mobile phone mirroring. 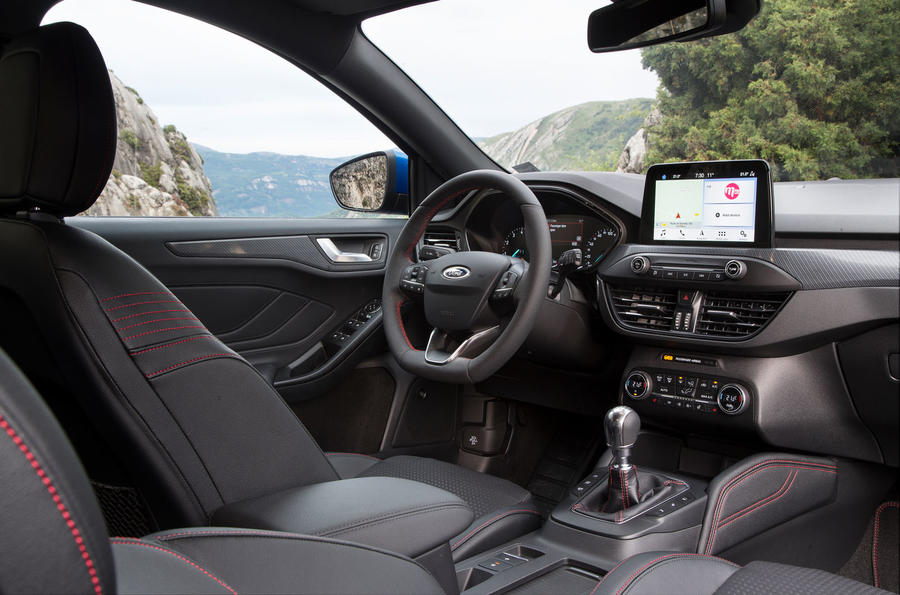 All of which makes the Focus a pretty compelling proposition. Away from having a premium badge on the nose, that seems important to me: that a car from a mainstream car maker offers something that the opposition just don’t.

VW gives you a solid interior. The latest Kia Ceed gives you no apostrophe, a silly-long warranty and, now, decent driving dynamics too. But there’s no car in this segment (fast versions aside) that drives as pleasingly as a Focus does.

You’d know why. I’d know why. Your Aunt Maude and Uncle Albert might not know, but just somehow appreciate it anyway. So the new Focus keeps its spot at the top of the dynamic tree, but adds extra functionality too. Recommended, but I'd whip probably half a star off of the base suspension variant. 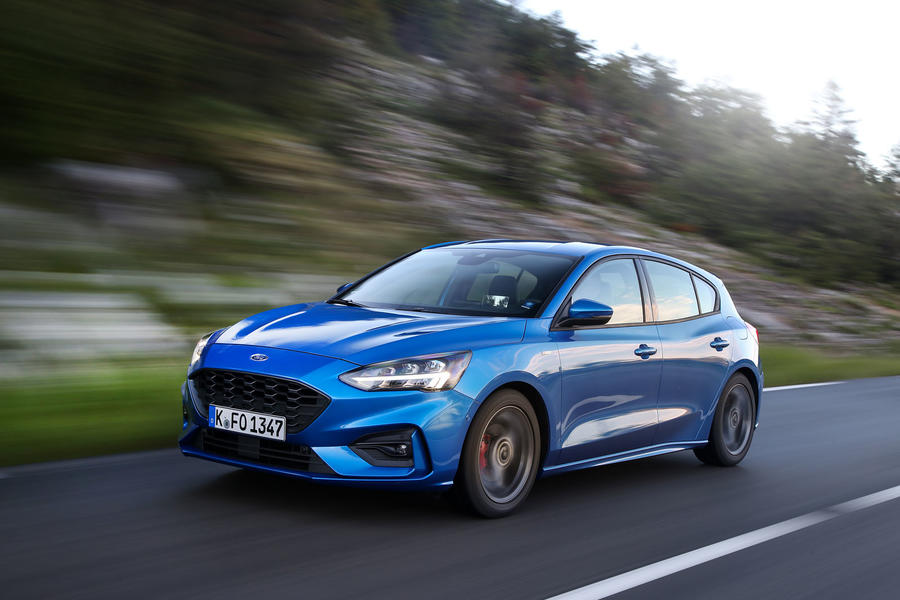 What about these Ford prices

Ford exitted competitive selling some years ago and are charging higher prices to get higher  profits from lower sales. With others rolling up their sleeves and working harder for the customer this is neither the Focus, nor the Ford, which it once was. De-speccing to cheap torsion beam rear axles is typical Ford penny pinching, so stiff armed at both ends. And can we have an assessment of the electric parking brake, likely another cost saver but, from personal experience, quite dreadful.

Autocar retains its position, bent over and ready to take the Ford advertising budget while unquestioningly promoting whatever tat they turn out next.

Glad they gave you models to

Glad they gave you models to test with both suspensions, so that the initial launch talk about how they drove the same can be clearly disproven!