From £17,9309
Fourth-generation Focus is bigger and better, but the 1.0-litre Ecoboost engine has to work hard to deliver proper pace
Open gallery
Close

Our first chance to see how the fourth-generation Ford Focus copes with the challenge of UK roads after previously driving it on the international launch.

We've been given a thoroughly representative example, powered by the 1.0-litre three-cylinder Ecoboost engine in the 123bhp tune Ford predicts will make up the majority of UK sales. Being one of the lower-powered versions, it also uses a rear torsion beam axle in place of the more advanced multi-link system that has now been reserved for the brawnier members of the range.

The question of how well the car deals with low-rent British Tarmac is key to whether it will be able to maintain the dynamic superiority that marked its predecessors out from the chasing pack.

Titanium X trim brings plenty of standard equipment and a £22,820 price tag, but Ford had also given our test car a comprehensive options workout, with LED headlights (£750), a head-up display (£400), Assistance Pack including radar cruise (£500), the Convenience Pack that brings auto park and those natty pop-out door protectors (£500) and a B&O Play speaker upgrade (£350) — plus a few other bits — taking the total to an altitudinous £26,495. 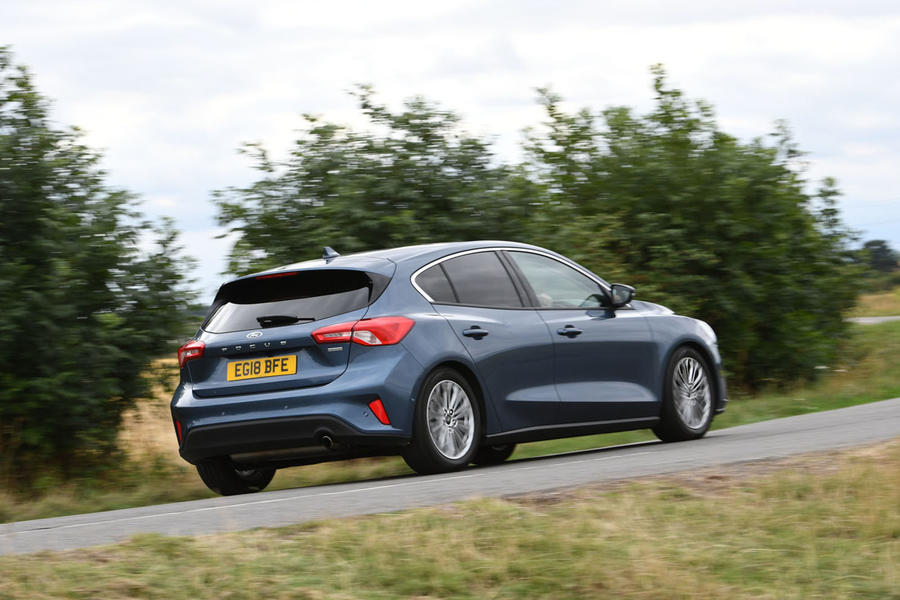 Fears about the torsion beam back end lacking dynamism are soon dispelled. In this mid-spec version, the new hardware is a non-issue; over a 570-mile drive that included some of the most demanding roads in Scotland, England and Wales, the new Ford Focus proved to be both refined and agile, handling corners with vim and verve and rough surfaces with assurance. Springs and dampers feel soft in slower turns, but the relationship between them is always collaborative.

The electric power steering is short on feel, but yields immediate and precise responses from the front end, with the rear axle helping out under higher loadings. This Focus can carry speed along a flowing road as well as any of its antecedents.

Refinement is generally good, although our test car had some wind whistle from the top of the driver's door at motorway speeds; the lack of any from the passenger side suggests an ill-fitting seal. The suspension copes well with higher speeds, but even on smooth surfaces there's a very slight busyness to it, a not-quite settling down that is reported by the backside and lower back. Like a dripping tap, it's hard to ignore once noticed, although the independent rear axle might not suffer from it.

The Ecoboost engine remains a characterful powerplant, pulling with a determination that belies its lack of size once on boost and with a pleasing offbeat soundtrack that's evident when worked hard. But it's a slugger rather than a puncher, with the turbo taking time to spool if lots of acceleration is requested at short notice — for instance, to take advantage of an overtaking opportunity.

The shift action for the six-speed manual gearbox seems to have grown slightly longer than that of the last car, and the selector itself doesn't have the same hand-filling mass of the last one, but the 'box itself remains one of the sweetest-shifting in the business. Driven respectfully, it's impressively economical, with fuel economy of the mid-to-high 40s seemingly achievable under everyday use.

Of course, there was never much wrong with the way the last Focus drove, and more effort has been expended to give this one more of an upmarket feel. Hard-feeling plastics in the cabin have been relegated far from where fingers are likely to regularly patrol. The new Sync 3 infotainment system covers all the basics well and is addressed through a crisply rendered 8.0in touchscreen; a mild irritation is that, when a device is connected through Android Auto, it prioritises the phone's navigation system over the car's native set-up; a problem if you're in an area with no signal.

There's impressive space for both front and rear occupants, although during our mammoth drive the front occupants noticed a lack of under-thigh support during longer stints. 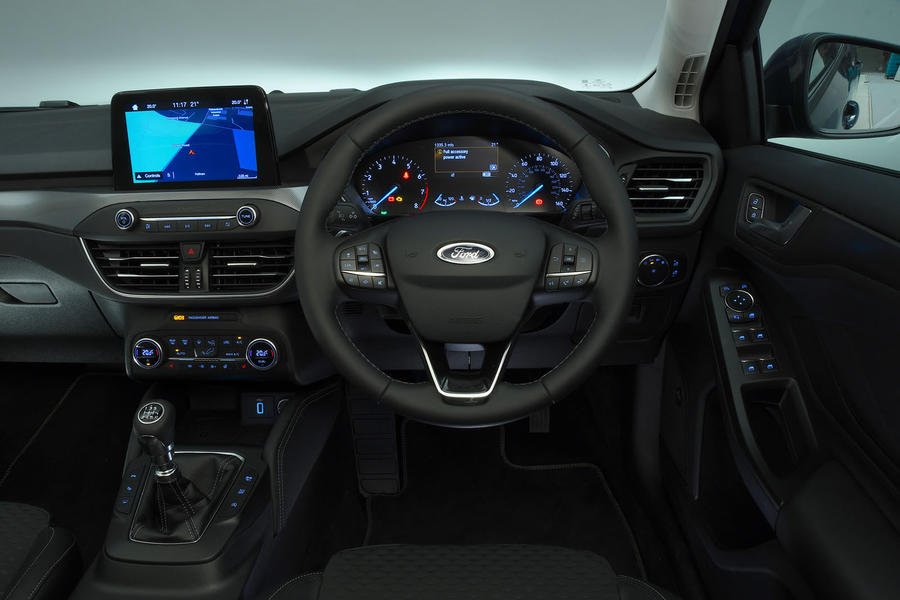 Group test rivals are being assembled pretty much as you read this, but on first impressions we will be very surprised if the Focus didn't end up on top of the hill and in possession of the castle.

The 1.0-litre Ecoboost remains an impressive engine, but when asked to haul around a car of this size it is not a fast one, and we suspect the less powerful 100bhp and 85bhp versions will feel pretty leisurely. Anybody looking for a level of performance more in keeping with the chassis’ abilities will be likely to go for one of the punchier 1.5-litre three-cylinder options.

But while the Focus is a great car, it does not seem a particularly distinctive one. During our time with the car, nobody seemed to recognise the fact that it was new, and we drove most of the length of the country and stopped numerous times without fielding any of the enquiries normally directed at even mainstream fresh metal. But it is the role of Fords to be generic, of course, and it is not a quality that needs to diminish their excellence. 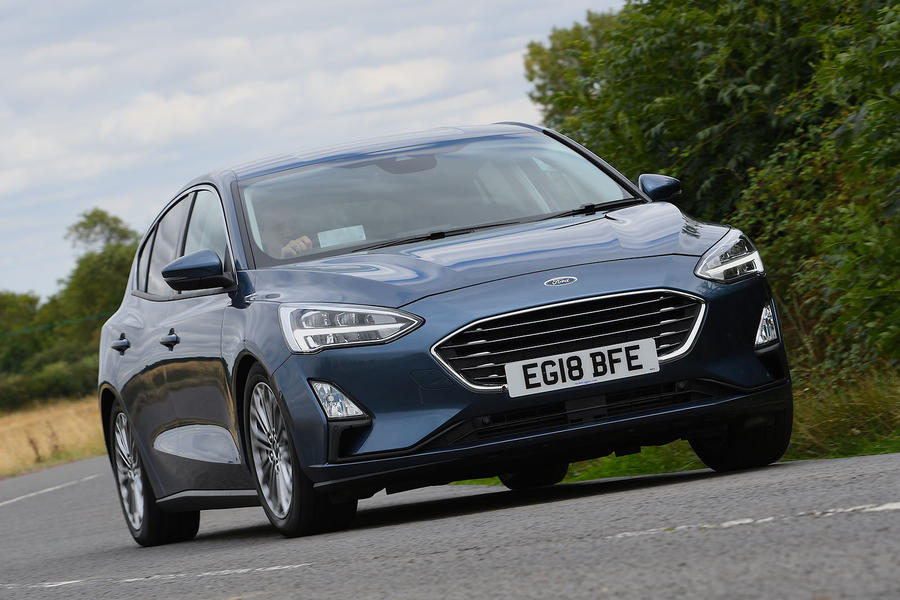 I took delivery of new Ford Focus Titanium on 30th September 2018. Within a few weeks I suspected that there might be a problem with the brakes. This became progressively worse so I took the car back to Bristol Street Motors for assessment on 2nd November 2018. They agreed that the brake system was faulty and that the car was unsafe to drive.

Since then, neither Bristol Street Motors or Ford Customer Relations have been able to give me a date when my vehicle will be restored to a safe condition and returned to me. This is an absolute disgrace.  The matter is now with Ford Credit for resolution.

They're having a laugh

Ford can't be serious with this car. It's the (outgoing) Mazda 3 with a Ford badge and a high price. It's December now and I've seen a grand total of two on the road. It's bombed. It's not hard to see why.

You provide solution of my

You provide solution of my confusion as I am thinking for buying ford’s car. Glad to read here review of 1.0 Titanium X 2018. Thank you so much for taking time and sharing this post with us.