From £31,38510
Does an official Mountune upgrade of 25bhp and 30lb ft improve the already rampant and rather magnificent Ford Focus RS?
Open gallery
Close

The standard Ford Focus RS is a masterclass in imperfect perfection. It warranted a five-star road test, despite the fact that a Volkswagen Golf R is better everyday, simply because when the RS is in its element, it rather redefines what you'd expect of a hot hatch. We love it, flaws and all. At which point it becomes harder than ever to believe that a Mountune intervention can improve things.

Still, this upgrade - officially dubbed the Ford Performance by Mountune upgrade or FPM375 - is a collaboration between the well-known tuning arm and Ford itself, meaning that you can have the extra 25bhp and 30lb ft and still keep your warranty. It's also only £899, so the appeal is obvious, despite the brilliance of the standard car. The kit as a whole includes a re-flashed ECU, high-performance air filter, bespoke crossover duct and upgraded air re-circulation valve (or what many of us would know as a dump valve).

It doesn't feel drastically different in normal use. Tool about in a moderately enthusiastic manner and the Mountune Focus RS delivers much the sort of robust, distance-warping performance that the standard RS already rolls out in abundance. It's when you find the right situation to roll your sleeves up, say a prayer, select Race and really go for it that the Mountune bits pay off.

The throttle response feels a touch crisper and the engine even more rabid from around 3000rpm onwards. You're not going to get booted into a hedge by some unexpected turbo lag, either. Even with a bit more power, the 2.3-litre turbo'd four-pot is joyously unfettered by ungainly peaks or plateaus in its power delivery, building speed progressively but with furious intent right through to the red line. 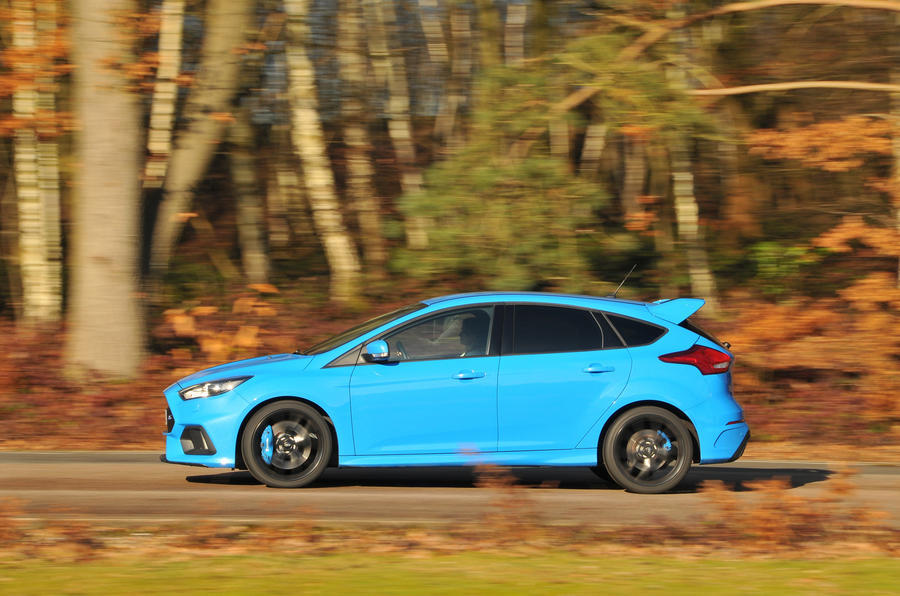 It sounds a touch different; a bit more of a satisfying hiss of released pressure as you lift off the throttle, but otherwise much the same purposeful, resonant burble punctuated with the obligatory overrun pops and crackles. Mountune does, of course, offer a wide variety of other upgrades, including a £1050 'axle-back exhaust' (which also doesn't affect the warranty), but our car didn't have it fitted.

The suspension is unaltered, so in hard use, you still get the addictive progression from a dependable whiff of understeer, through bullish neutrality before edging into manageable oversteer. Equally, the ride remains a bit wearisome in terms of its stiff vertical movement, but few will quibble, given the handling intensity you're getting in return. 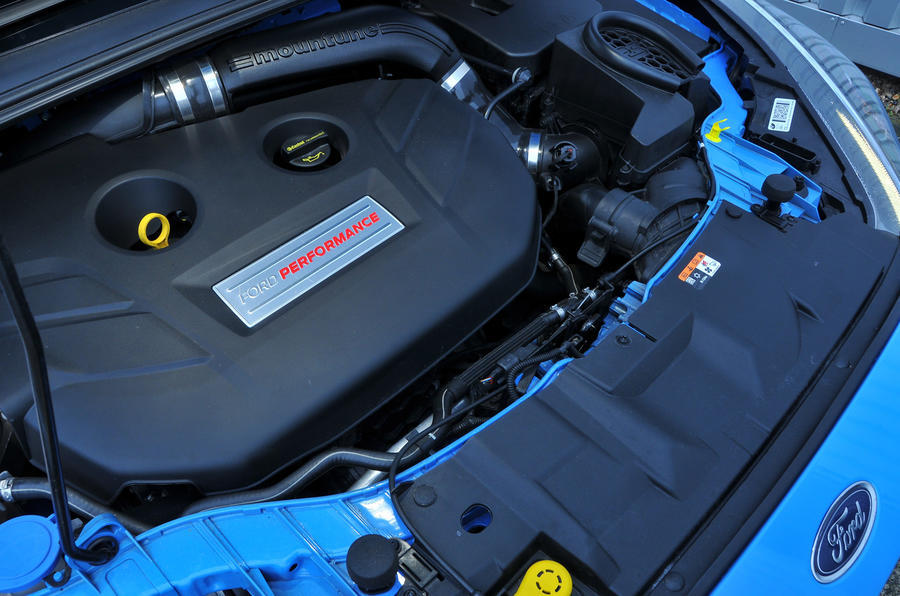 Hell, yes. The Focus RS is all about those moments when it feels far more than a hot hatch ever should; more mobile, more aggressive, more like a Nissan GT-R with five doors and a bargain price tag. The Mountune kit only makes those moments a fraction more spectacular, but it's a noticeable, euphoric fraction.

Plus, this upgrade nudges the RS even closer to titan hatches, such as the Mercedes-AMG A 45 and Audi RS3, and for not much cash in this context. So yes. Do buy a Focus RS, and do buy this Mountune kit. You won't ever regret either decision.

I’ve owned the RS from new in late 2016 after a long pre-order wait (I initially wanted a Golf R but VW couldn’t be less interested in my money). Shortly afterwards I asked Ford to install the Mountune upgrade because like the article says it took the car to the then heights of the Merc and the Audi which were class leaders at the time.

So what’s my experience been day to day of an FPM375 RS - on the whole excellent. Most of the time as a daily you can forget about it being a b-road monster and just drive to work sensibly, you can fit a bike in the back or on the roof with roof bars (it’s just a Focus after all) and fuel economy is reasonable if you are tender footed. The boot is marginally compromised because of the AWD system that eats up floor space, but you still have plenty of space for spare child seats or trips to the supermarket with a family of five.

But on a sunny evening, when the sun is low in the sky and the roads are quiet and you want to have some (safe) fun, the RS with added Mountune is a LOT of fun. A lot. It’s fast, it’s capable and the handling characteristics when you hit a corner marginally too fast are such that the car feels like it’s pivoting on the spot, almost like it has rear-wheel steering or you’re sitting on a swivel chair. I was blown away by this when I first got the car and I don’t think I’ll tire of it, in my previous car (a 2002 WRX, with Prodrive upgrade to 245Bhp) you’d approach a corner wide, point the car into the apex and floor it to get the car where you wanted it. It required some pre-preparedness and 100% concentration, left too late you’d run way wider than you wanted or would have to kill speed in a hurry. Not so the RS, follow the road line exactly and just point and squirt - the car literally does the rest sending power where it’s needed to make up for your shortfalls. Be warned though, the car is not ‘intelligent’ and sometimes gets confused between an overtake manoeuvre and a corner. Example - when I first got the car I was on a long straight stretch of road and came up to a car I wanted to overtake. As with my previous WRX I’d get quite close before attempting the overtake to make sure something fast didn’t come my way in the opposite direction. As I approached I duly indicated, pulled out and at the same time accelerated. The RS mistake this input as an instruction to go fast round a right hand bend - the end result was an injection of power to the inside left rear wheel which sent me heading toward the verge on the opposite side of the road. A lucky catch, several corrections later followed by a more sedate return to my ownlane and the car was once again pointing where it should be. Moral of this story, with great power comes great responsibility, also this particular generation of cars are clever but really just augment the driver rather than thinking for them (which the next generation will do). Basically if you’re stupid, the RS will amplify your stupidity.

So, day to day 375BHp is very easy to live with on normal roads and great for motorways, very little troubles you with that amount of power, and on wet and slippery conditions you’re not afraid to use it. The key thing is to be restrained, and when you do open the taps be aware the car can overthink a situation and try to be too clever by half. The level of grip is phenomenal though, and unlike my WRX I managed to hold on to the same set of front tyres for 3 years, the Scooby would munch through a pair per year thanks to it’s lowered and more aggressive Prodrive shocks. It’s also very easy to get a speeding ticket, I’ve had to attend a speed awareness course and then afterwards return to my RS in the car park with everyone no doubt thinking ‘that’s the guy’. I’ve also had my fair share of Golf Rs and Type R Civics surgically attached to my rear bumper and that is the downside of owning the rather obvious looking RS, people mistake you travelling from A to B as pistols at dawn, usually when you’re least in the mood. That said it was very satisfying outperforming a BMW X5M once which was probably twice the price of my RS and the driver definitely looked like he was having half the the amount of fun I was.

In summary the incremental gains you get from the Mountune’d RS were to me worth the price of entry, I have had to constantly inform my local Ford garage not to over flash the ECU with their seemingly yearly bug fixes and updates however and no one can tell me (for certain) if the various updates will or will not wipe Mountune’s. The cars works as well as before, but now the dial goes all the way to 11, even though there are only ten digits on display - it’s like secret power. I’ve also deliberately not put the Ford Performance boot sticker on the car as I feared that would attract even more rivals like sending up a flare saying “race me”.

Focus RS is not the best alround family,day to day hot hatch

"The standard Ford Focus RS is a masterclass in imperfect perfection. It warranted a five-star road test, despite the fact that a Volkswagen Golf R is better everyday, simply because when the RS is in its element, it rather redefines what you'd expect of a hot hatch. We love it, flaws and all."

The above quote says it all to me ,the original hot hatches were also family car /commuter etc., not over hyped "specials" pretending to be such.

The Golf R LAUNCHED 2 years prior to the Focus RS and yet today still remains the best in class all rounder but at present still doesn't get the praise it deserves as it pretty much holds its own with the Focus RS in performance and handling ,superior in quality, usability and hasn't needed the Mountune type add -on.

Without being shouty and in your face.

Focus RS is not the best alround family,day to day hot hatch

"The standard Ford Focus RS is a masterclass in imperfect perfection. It warranted a five-star road test, despite the fact that a Volkswagen Golf R is better everyday, simply because when the RS is in its element, it rather redefines what you'd expect of a hot hatch. We love it, flaws and all."

The above quote says it all to me ,the original hot hatches were also family car /commuter etc., not over hyped "specials" pretending to be such.

The Golf R LAUNCHED 2 years prior to the Focus RS and yet today still remains the best in class all rounder but at present still doesn't get the praise it deserves as it pretty much holds its own with the Focus RS in performance and handling ,superior in quality, usability and hasn't needed the Mountune type add -on.

Without being shouty and in your face.