7
Share review
Porsche’s BMW X6 rival lands in the UK, and we get behind the wheel of the base model to see if cheapest is best
Share
Open gallery
Close

The new Porsche Cayenne Coupé is an answer for those who think Porsche’s latest SUV is just too SUV-shaped and too darn practical.

Porsche is not beating around the bush with this one - it hasn’t gone to the trouble of making a new model name or designation for its swoopier version of the Cayenne. Instead, it’s tacked the Coupé name onto it, so it’s clear where the new car stands.

Glib comments aside, there’s a clear market for a more style-oriented version of the Cayenne, given every one of its main rivals offers something in that supposedly niche segment. BMW takes the X5 and turns it into the X6, Mercedes offers a GLE and GLE Coupé, and Audi styles the Q7 into the Q8. Land Rover also has a rival of sorts in high-end variants of the Range Rover Velar, too.

Whether or not you feel a car that compromises the ‘utility’ element of its mantra on the altar of style speaks to you - this tester can’t say it does -  Porsche at least has its sports car bloodline to draw upon, both in design and engineering terms.

So the objective here on our first UK drive of the Coupé is to see whether Porsche’s new range addition offers much in the way of substance beyond its looks - a tough task for the base model of the range. 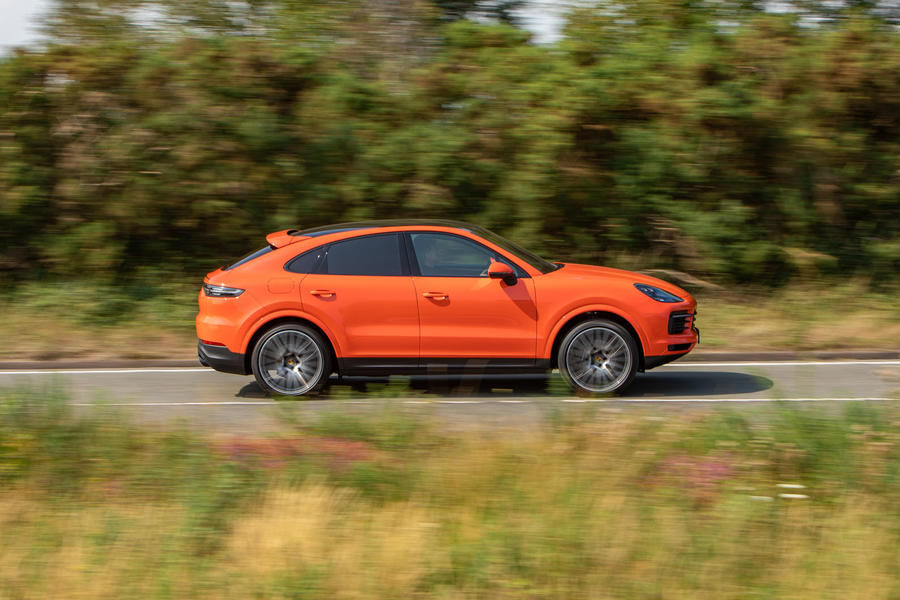 Let’s briefly touch on aesthetics – that murky area of subjectivity. To my mind, it’s the front view where the squashed down, sloped off roofline has the most positive impact. In combination with a more steeply raked windscreen and slightly wider wings, it gives the Cayenne its first clear visual link with the 911, and a scaled-up Macan vibe.

The rear? I’m not totally convinced - particularly when the not-at-all sleekly integrated fence panel of a tailgate-mounted rear spoiler erects itself at 65mph or so whether you want it to or not.  However, it’s more visually successful than BMW’s or Mercedes’ efforts.

Step inside and you’ll find the same slick, neat and impeccably finished interior as the standard Cayenne, bar a crucial detail: it’s a four-seater as standard. Two shapely chairs are separated by an armrest/storage/cupholder unit - but don’t worry, a three-seat bench is a no-cost option.

The bench itself has been mounted 30mm lower, too, to counter the 20mm roofline drop. That solves the senselessness of having a two-tonne SUV that your teenage kids have to tilt their heads to sit comfortably in. But there’s no engineering away the drop in official boot capacity of 16% - it’s still big, but notably less dog friendly.

It may disappoint some that Porsche hasn’t wholeheartedly chased extra sportiness with the chassis, as bar a rear axle that is 18mm wider there’s very little in the way of alterations. However, Porsche’s ‘PASM’ adaptive dampers are now standard fitment. Predictably, our car was also fitted with £1600 of optional three-chamber air suspension as part of nearly £20k of general kit upgrades.

What it means is that, while we can’t say for sure the case is the same with the basic suspension, the Cayenne Coupé retains the fluidity and poise of its sibling that makes both cars superior to pretty much every other large SUV for driver enjoyment.

The steering is precise without being nervous and feels naturally weighted, making the Cayenne feel more agile than its looks would suggest. Tight body control also ensures direction changes are deftly handled, meaning you require far less of a ‘slow in, fast out’ approach than many supposedly sporting SUVs.

So why, you might ask, does it not warrant the same four stars as the variant we drove abroad back in June? Two significant reasons.

The first is the mildly disappointing ride, which can most likely be attributed to the mammoth £2500 22in wheels fitted to our test car. The air set-up ensures it has the high speed serenity and composure expected of a luxo-SUV, but that doesn’t continue once you find yourself on brittle Tarmac at lower speeds or around town, where there’s more thumping to be heard and felt than we’d expect. Road noise intrudes a bit on some surfaces, too. Lose a couple of inches off those showy wheels and this could be solved.

The other reason is less difficult to fix without upgrading to the S model. This £62,000 entry point to the range gets the same 330bhp 3.0-litre turbocharged V6 as the normal (and £6000 cheaper) Cayenne. And, frankly, it’s pretty underwhelming.

It’s effective, don’t mistake that. 0-62mph in six-seconds dead is, in theory, plenty enough for something this big and heavy. But in a car trading heavily on its sporting prowess and with one of the best badges in the business on its bonnet, you hope and expect for a pleasing kick in the back accompanied by a characterful growl. It doesn’t really deliver on either front.

And of course because it’s a big petrol engine in a big, heavy car, 25mpg is about as good as it gets in mixed driving. It actually makes you miss the diesel, which didn’t sacrifice too much in terms of noise, felt just as quick (yet more effortless) and was around 10mpg more efficient in the real world. 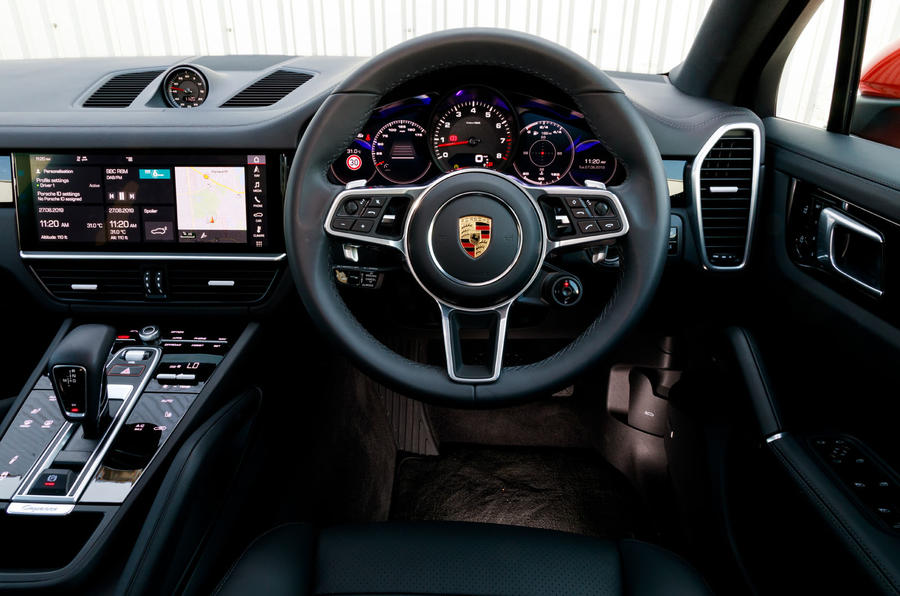 If a large SUV-coupé is on your shopping list and around £60k is your top-end budget, you could do a darn sight worse than the entry-level Cayenne Coupé. It’s a relatively stylish, relatively uncompromised take on the well-proven Cayenne formula. It’s a good cruiser that also happens to handle more tidily than its rivals, too.

If it was a BMW or a Mercedes, all would be well and we’d have little more to say. But if you’re buying into the Porsche brand it’s reasonable to assume you’d want a powertrain that feels in some way genetically linked - be it in its performance or its character - to the rest of the firm’s range. And, to us, the base V6 feels like it doesn’t belong.

Save those pennies up for the soon-to-arrive Cayenne Coupé S - or if you really want a kick in the back, the absurdly fast Turbo - and you’re unlikely to see too much in the way of a fuel economy penalty compared to the base car. The ‘less is more’ mantra doesn’t apply here. 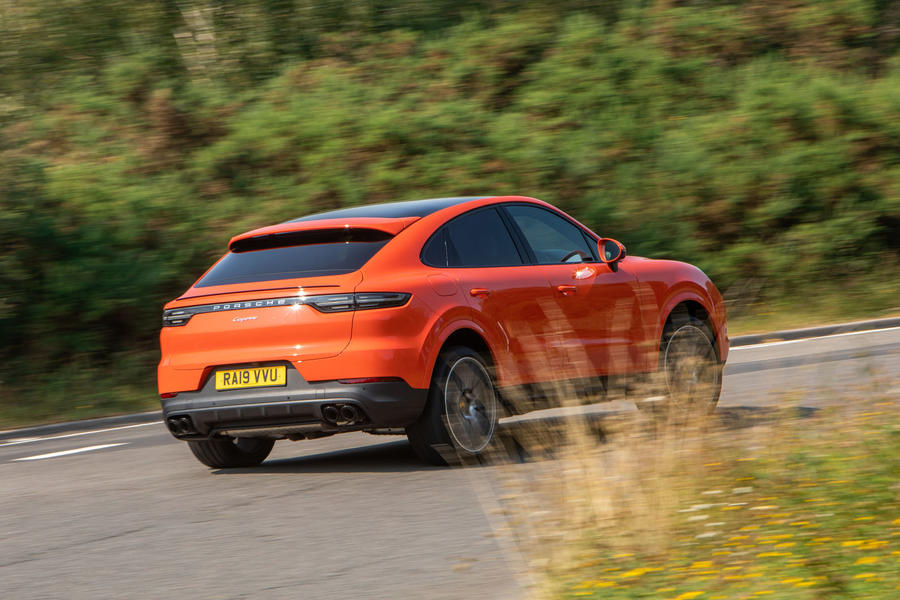 This has surely got to be the

This has surely got to be the dullest, ugliest of all the coupe suvs

Will someone please stop this

Will someone please stop this SUV X-Over madness

Will someone please stop this SUV X-Over madness

I maintain the quality of drugs designers consume today has rapidly deteriorated.