Imagining a customer for the Audi S8 is a slightly complex exercise, but the car apparently now accounts for 20% of Audi A8 sales in the UK, so there must be plenty of them.

This car’s sheer size, its particular comfort and luxury tuning, its reserved performance styling and its unambiguous limousine classification all seem to mark it out as one not to drive but rather be driven in - which is a little at odds with its Audi Sport badging.

So, is this the A8 for the CEO who travels in the back and just wants the car park status that it confers; or, as a more understated fast saloon, is it bought by someone who doesn’t actually want people – colleagues, employees, tax accountants etc - to notice it? Might its owner be driven in the week, perhaps, but drive at weekends? Or are they just an A8 ‘patron’ who wants a car with as much Audi-brand ‘technik’ as they can get?

The answer to every one of those questions could well be 'yes', funnily enough, because this is a car of a genuinely broad luxury appeal.

Having arrived as part of the current fourth-generation A8 range back in 2020, the S8 (which comes in short-wheelbase form only) offers a similar blend of big-hitting turbo-petrol V8 performance, top-level refinement, uncompromising luxury and understated performance styling as that for which so many of its predecessors have been known.

But it offers even more Audi-typical advanced drivetrain and suspension technology as standard, much of which isn’t available on any other A8. Quattro four-wheel drive is there to put the engine’s 563bhp to effective use, of course, but here you get an active ‘sport’ rear differential in addition to the mechanical centre diff of other A8s, while four-wheel ‘dynamic’ steering comes as standard (it’s an option on the rest of the range).

While the same suspension can be optionally fitted to other A8s bought elsewhere in the world, Audi UK only offers the fully active set-up as standard on the S8. 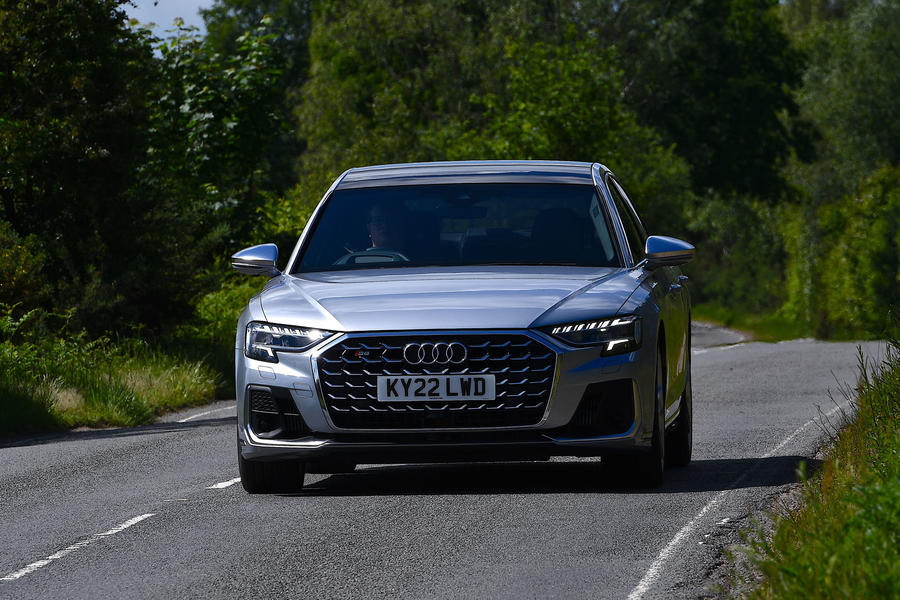 Well, that active suspension is quite the clever system, and you can tell as much as soon as you open the driver’s door. Like other air-suspended cars, the S8 rises to meet you as you get in; but unlike others, it pops up on all corners surprisingly quickly, in less time than it takes you to swing open the door and slide inside. That’s because each of the 48V suspension actuators can supply as much as 800lb ft of torque, be that to lift the car at each corner, to brace it against body movement or to trap and damp each wheel as it rebounds.

Select the car's Comfort+ operating mode and the suspension has several other party tricks while you’re driving. When the forward sensors detect a speed bump up ahead, the car’s body will rise up by 50mm, and then it will use those electric motors to cushion and manipulate the suspension struts as you pass over the top of it. If you take ‘sleeping policemen’ at 10-20mph, they go by uncannily smoothly and almost undetected. It’s a truly eyebrow-raising experience.

With 20in alloy wheels on the car as standard and a 21in set on our test car, the S8’s low-speed ride has only average noise and vibration isolation, and it can’t smother shorter, sharper inputs as effectively as bigger ones. Even so, the suspension maintains extraordinarily level and steady body control, even at faster cross-country speeds and on the motorway, as well as in town.

It actually leans the car’s body into longer, faster bends by up to 3deg (to the improvement of onboard comfort, rather than roadholding, Audi says). And it acts like an active anti-roll control system to sharpen the car’s handling when you’re using the Dynamic driving mode by continually juggling the suspension’s lateral stiffness between the front and rear axles.

The net effect of the latter two features isn’t quite as impressive as the S8’s low-speed ride trickery, but they do contribute to striking high-speed handling precision for the car, as well as excellent outright stability at speed, and plenty of cornering roll-resistance and lower-speed agility too.

The S8 feels as light, filtered and assisted though its controls as you might expect of a full-size limousine; and slightly managed and manipulated in its handling responses much of the time, rather than entirely natural, consistent and intuitive. It’s generally easy to drive, though, and maintains a brisk pace very nonchalantly and comfortably indeed. The engine-and-gearbox combination has wonderful smoothness and refinement, just a little bit of V8 audible soul, and lots of accessible torque and high-range punch when you let it rev.

Audi's Comfort seats are superbly soft, broad and supportive, meanwhile, and sit in a cabin that offers abundant rear passenger space even on the standard wheelbase. Our test car had lounge-style rear seats, each with its own individual touchscreen media display.

For the driver, the slightly obstinate feel of Audi's MMI touchscreen infotainment system (which often insists on an unusally firm fingertip prod to register an input) is a minor annoyance, likewise the omission of any seperate physical cursor controller for the system - although it's still not the most distracting installation of its kind, with usefully located shortcut keys to help you flick between menus. 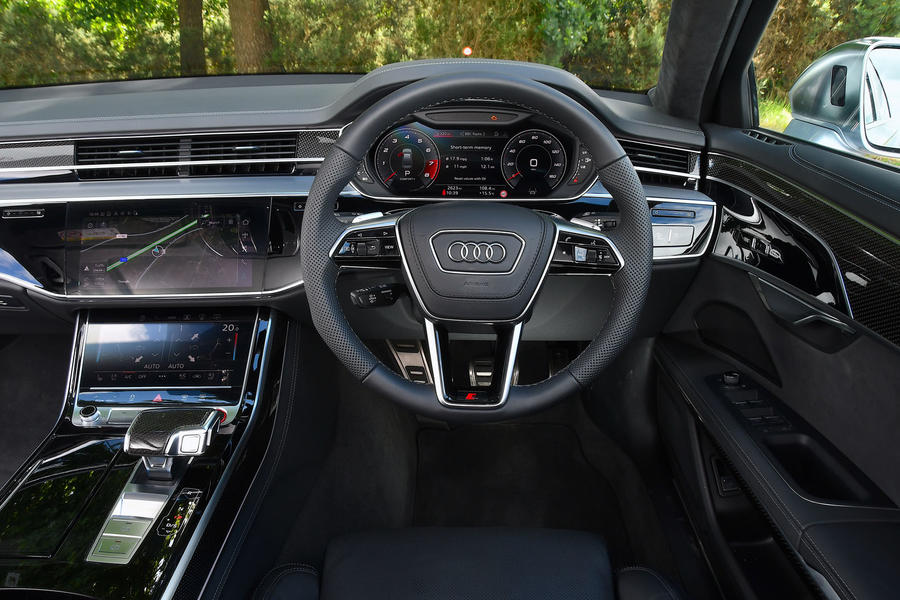 The S8 is a car with plenty of pace and dynamic ability, but it has a particularly relaxed and refined character. That might disappoint those looking for greater outright excitement, but it makes this an usually effective fast luxury cruiser, and one of unique and special talents elsewhere too.

Comfortable, composed, luxuriantly spacious and effortlessly fast executive transport doesn't get a whole lot better than this. Whatever your reason for choosing it in the first place, there's a very good chance that this highly advanced modern limousine will have it covered. 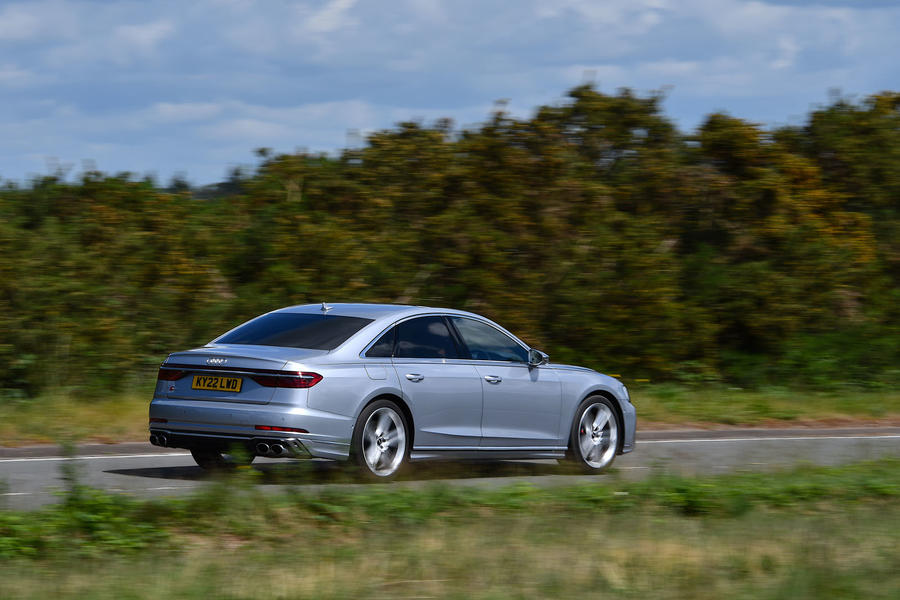 Log in or register to post comments
Just Saying 21 May 2022
If you're a smartly dressed successful person behind the wheel of one of these, or the equivalent BMW/Merc then rember this, most folk see "driver" better off with Audi, BMW, or Merc SUV.
Just Saying.
d79m 20 May 2022
Its always surprised me that they never made an A8 avant! Id have thought in that market with these sorts of cars main rivals being Range Rovers that an avant would give them the practicality to compete with them. Id curtainly have one if they made it