From £54,6558
We've driven the RS3 hatchback, and liked it, but can the saloon match it?
Open gallery
Close

Is this Audi RS3 the new sweet spot for performance cars? With the cars from the class above, like the BMW M3 and Mercedes-AMG C63, approaching £80k, and also getting ever larger and more powerful with each generation, I’d argue something the size and oomph of the RS3 makes more sense on our crowded isle. Even if it, itself, is well north of £50k for a well-specced version.

In saloon form, it feels extra special. Although the RS3 hatch doesn’t dominate the sales ratios as much as you might imagine - 800 versus 400, hatch to saloon - somehow the saloon always feels more distinctive, that by opting for it you’re defiantly not trying to keep up with the Joneses.

Thankfully, Audi has persisted with the five-cylinder layout. You’d think the bean-counters would argue hard for a four-cylinder - after all, the RS3’s five-cylinder lump only appears in the Audi RS Q3 and TT RS - but the Audi engineers are seemingly made of sterner stuff and won that battle.

Here, it produces 394bhp and 369lb ft, exactly the same figures as the new RS3 hatch and 15lb ft up on the last version. Differences between the two bodystyles are hard to find: both crack 62mph in just 3.8sec (0.3sec up on the previous gen) and both feature Audi’s new RS Torque Splitter. This torque vectoring system can send 100% of the twist that reaches the rear axle to either rear wheel - otherwise known as a Drift mode.

Both cars also feature revised suspension set-ups compared with the last RS3's. The front track has been widened by 33mm, there’s increased negative wheel camber and the dampers and valves have been overhauled. Adaptive dampers are now a £5000-plus option, the exact cost depending on which trim you’ve opted for. For this hefty lump, you do also get ceramic brakes, an RS Sports exhaust and a top speed increased to 180mph.

Where the two cars obviously do differ is in bodystyle. The saloon is slightly longer and lower, by 153mm and 24mm respectively, but the flip side is that the saloon’s rear head room is slightly more pinched. Certainly, anyone over six-foot would struggle in the back seats. The wheelbase between the two is identical, so leg room doesn’t differ at all.

The saloon’s boot is still a decent size, at 321 litres. In fact, it’s bigger than the hatch’s boot under the parcel shelf, so if you’re not looking to regularly fold the rear seats, the saloon is arguably more practical. And certainly more secure. 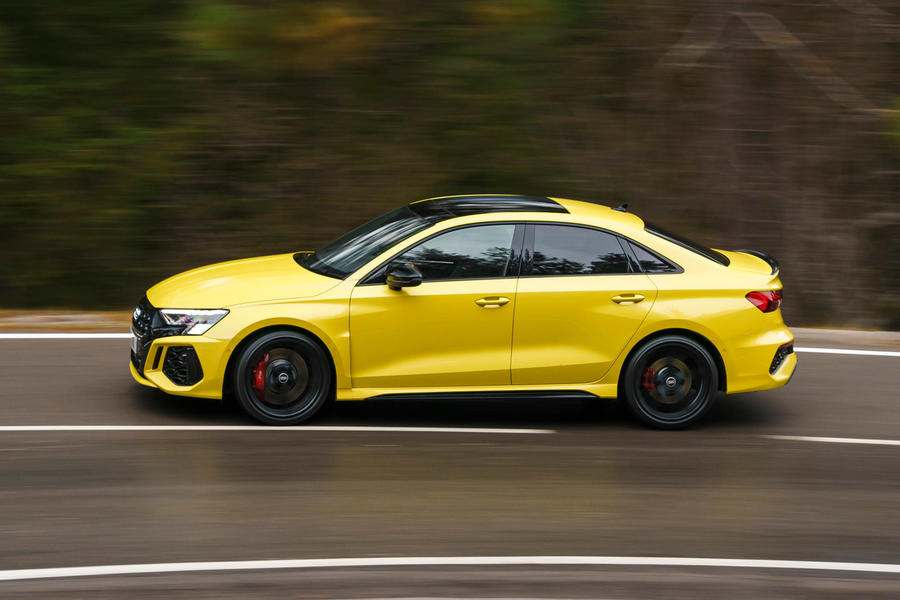 The Audi engineers have done a good job of dialling out the understeer that has been a trademark of previous RS models: for a car where the engine is still mounted ahead of the front axle, this one feels much sharper.

Through slow corners, you still have to work it quite hard to get it to really bite at the front, and it doesn’t rotate around you on throttle adjustment quite like the ultimate hot saloons do, but it’s definitely more playful than RS3s of old. Grip levels are impressive, as you’d expect, and if you push hard on the exit of a slow corner, you can feel the rear starting to get some attitude. The improved steering helps. It’s still not got the ultimate levels of communication, but it doesn’t feel as leaden as in the previous gen car, and is sharp and progressive. Combined with the feedback from the chassis, this RS3 gives a more interesting and involved journey.

There are seven drive modes (surely no one needs that many), but auto and RS Torque Rear are the ones you’ll want to be in most of the time. The car does a good Jekyll and Hyde of being civilised around town and on the motorway, the adaptive dampers always firm but never too crashy, but when you flick it into RS mode (either via the 12.3in touchscreen or the button on the steering wheel), things really come alive, with sharper everything and a much more aggressive exhaust note.

The world will be a sad place when we stop building engines like this. Full of character thanks to its five-cylinder thrum, it’s sharp-witted and as punchy as the headline acceleration figure suggest. Add in the quattro four-wheel drive system and there aren’t many cars on sale that would be as effortlessly quick across a damp B-road. 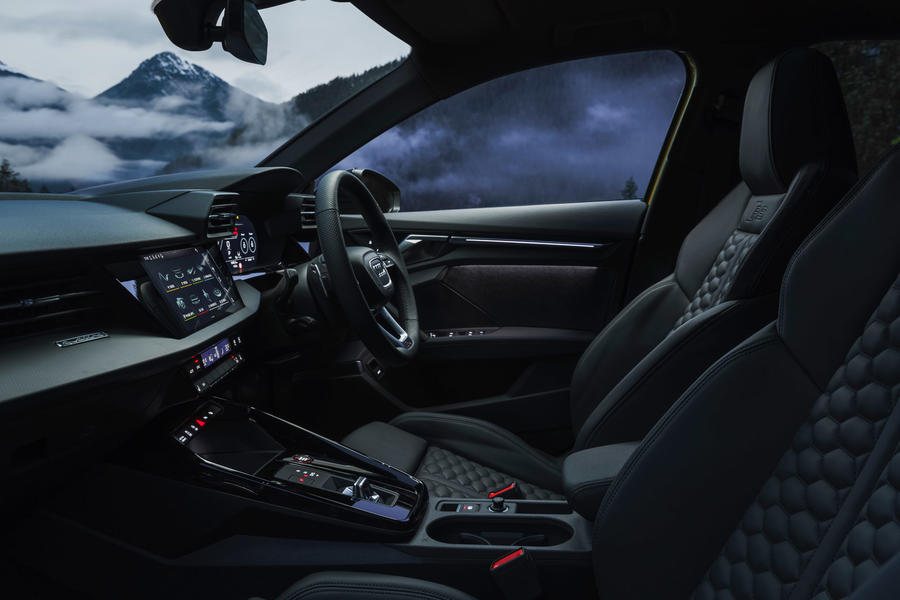 Cars like these might be right-sized for the typical UK B-road, but they are getting pricey. The RS3 saloon starts at £51,900, and you’ll definitely want the RS Dynamic pack (£5500), and the more interesting paint colours are £575. So that’s £57,975 - a punchy figure no matter how much pace is on offer.

But look past that, if you can, and this is a great addition to the pack. It’s taken the standard RS recipe of outlandish pace and built in improved handling - two elements that tick most of our boxes when it comes to performance saloons.

RS3 hatch or saloon? That's a trickier one. There's no tangible difference so it purely comes down to personal preference. On that basis, I'd go saloon. 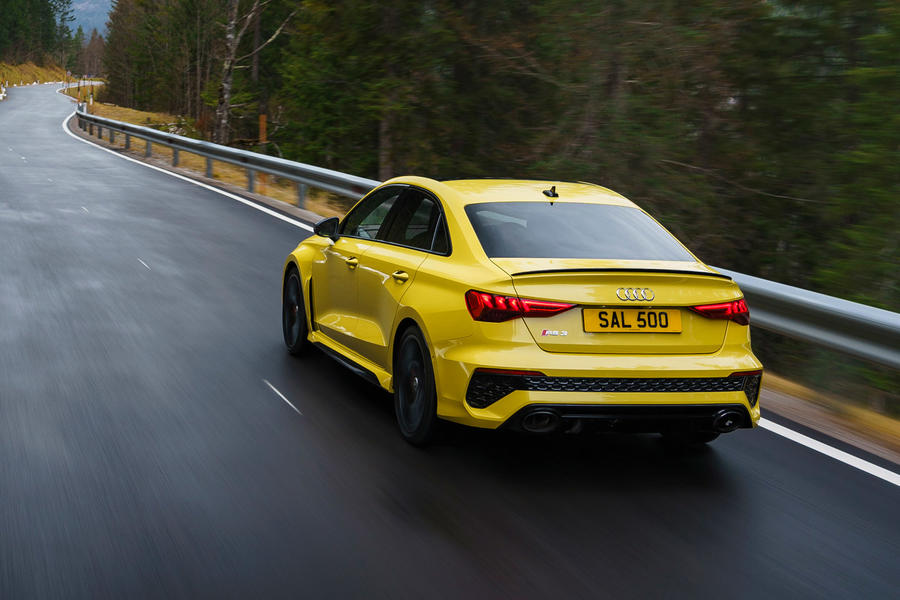 To answer the previous posts its just the way business is these days. You and I are enthusiasts, but like it or not we are NOT the majority of buyers. The majority of buyers are non-enthusiasts who will cross shop the alternatives for latest features etc. Audi is just riding the wave for fear of falling off. Look at it like this, A GT3 (just judged best drivers car) does not have or need 7 driving modes and nobody buying it wants them. Difference is that car is built and purchased by enthusiasts. So yes, Jetta in a frock, enthusiasts will buy the Golf R.

Nearly £60k for a Jetta in a posh frock... Perhaps Ford should bring back the Orion..

Just Saying 22 November 2021
There are seven drive modes (surely no one needs that many)
I agree, never understood why the owner would need/want to f*** around with so many?!
Surely two is enough, normal and sport.
Reminds me of an early M5, M6 when Hammond was detaing just this point.
View all comments (6)