From £48,6758
Facelifted Q7 gains a fresh new look inside and out, the latest Audi infotainment systems, and 48V mild-hybrid powertrains. We head to Ireland to try it out
Open gallery
Close

A facelifted, fully WLTP-compliant version of the second generation Audi Q7; an SUV we’ve always liked for its impressive rolling refinement and plushness, if not so much its ability to engage and excite like no other. This updated version, it would seem, is very much a continuation of that theme, but with a few additional bells and whistles added in.

But let’s talk about the exterior first. Usually, a facelift constitutes a minor change to the way a car looks. You might get a new foglight cluster, or some new wheel design options and that’ll be it; the end result will usually be a car that doesn’t look a great deal different to its immediate predecessor.

A similar strategy has been employed on this particular Q7 - there’s a new grille, some new headlights, a chrome strip across the tailgate a la Audi A6 - but the final outcome is a car that looks different enough from its predecessor so as not to cause confusion. While the tweaks are mildly conservative, they lend the Q7 a more purposeful, assertive aesthetic - particularly in the top-trim Vorsprung trim level.

Inside, things have been changed up to an even greater extent. The previous model’s architecture has been completely done away with, so the Q7 is now much more closely aligned with the likes of Audi’s latest C- and D-segment saloons and SUVs. The twin-screen MMI Navigation Plus infotainment system seen in the likes of the Q8, A6 and A7 is now standard across the range, as is the latest-generation version of the Audi Virtual Cockpit.

There are differences beneath the skin, too. Air suspension that adjusts through 90mm depending on drive mode is now included from the entry level, while Black Edition and Vorsprung models gain a sports-biased set-up that sees them sit 15mm closer to the deck. Those top-trim Vorsprung models also get rear-wheel steering, which is a nice touch.

From launch, there will be a choice of two 3.0-litre V6 diesel engines, and one 3.0-litre V6 petrol. All are mated to a 48V mild-hybrid system, as well as an eight-speed torque converter automatic transmission. A plug-in hybrid will inevitably follow a bit further down the line, as will a reinvigorated SQ7 with its monstrous diesel V8.

For now though it’s the 50 TDI we’re going to focus on, the reason being that both it and the lower powered 45 TDI are expected to account for up to 90% of the Q7 UK sales mix when the SUV goes on sale in September. 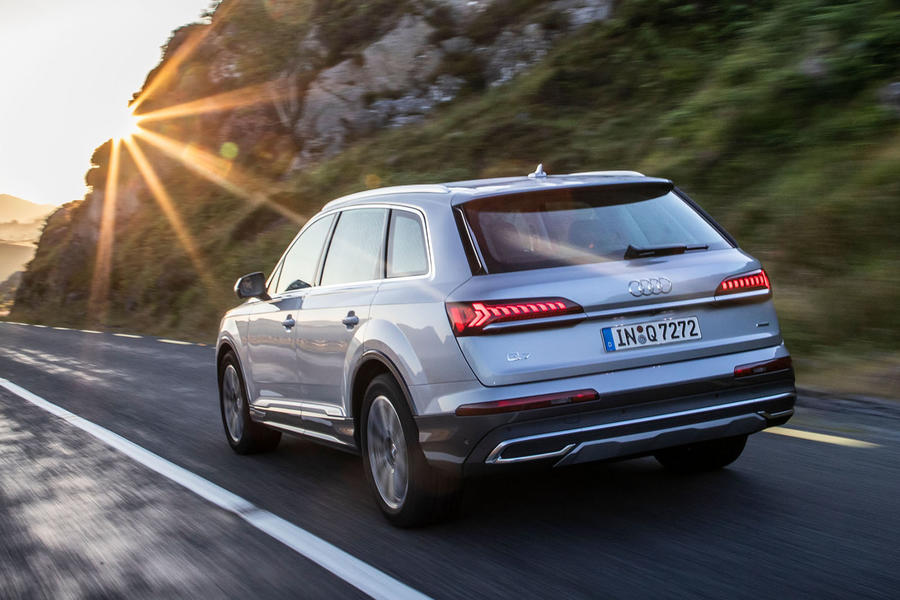 Impressively comfortable, massively refined and as a long-distance cruiser, very likeable indeed. Of course, none of this comes as much of a surprise, but that doesn’t make it any less noteworthy.

The 3.0-litre diesel V6 in particular strikes a wonderful balance between performance and civility. With 282bhp and a deep 442lb ft well of torque on tap it not only gets you up to open road speeds in a time that’d give plenty of hot hatches a run for their money, it does so in a manner that’s also effortless and nonchalant. The accompanying soundtrack is rich and bassy, too; though the cabin is so well isolated from the outside world that the engine’s deep growl sounds distant and far off.

Slightly less worthy is the eight-speed transmission. Under lighter applications of throttle it can feel reluctant to kick down, so the process of tapping into the engine’s torque isn’t always as straightforward as it should be. It also seems to enjoy taking its time to properly hook up when you want to move away from a standstill. Apply too little throttle in such instances and you’ll just crawl off - an experience that wouldn’t be welcome when joining a busy, fast-moving roundabout. That said, once up and running it swaps cogs in a dexterous enough fashion, but an added degree of urgency - even when set to the more aggressive Dynamic drive mode - wouldn’t go amiss.

Happily, it still rides in the same cosseting, confident fashion as before. Undulations are smoothed over in such an efficient manner the Q7 almost seems indifferent to the quality of the surface underwheel, while secondary intrusions feel softened off and distant. Dynamic mode understandably sees some of this compliance sacrificed in the name of tighter body control, but even set as so you’d have a hard time saying it was uncomfortable.

That said, it’s unlikely you’ll be opting to make use of Dynamic mode all that often - it’s just not a car that does much to encourage you to drive it hard. There’s loads of traction, but the steering is tight-lipped and it feels its size and weight through bends. The Q7 is a car that seems far happier to waft you along in calm, quiet comfort - and on that front it really does impress.

In addition to the 50 TDI model on the standard air suspension set-up, we also were able to sample the 55 TFSI petrol on the firmer sports configuration. The 335bhp, 369lb ft motor pulls strongly in a smooth refined manner, and leaves no impression that it’s at all wanting for performance. That said, it’s still the diesel that seems to be the best fit here - if only for its superior torque and the fact it’ll no doubt prove to be the more economical of the two (Audi is yet to announce WLTP figures).

The sports suspension, meanwhile, does make for an understandably tauter ride than what you get on the standard set-up, but it’s not so drastic to compromise the Q7’s touring credentials. The greater levels of body control it allows through bends is welcome too. Admittedly, there’s slightly more in the way of secondary interference over patchier stretches of road, but this would have had as much to do with the fact that the petrol car was riding on 21in alloys (the diesel was on 20s), as it would the lowered suspension. Even so, you would'nt feel in any way short changed for ride refinement or comfort were you to opt for the sports suspension without trying the regular set-up. But as the Q7 seems to be pitched more as a plush, relaxing SUV than it does as a thrilling driver’s car, were it our money on the line we'd stick with the standard configuration and the smaller alloys. 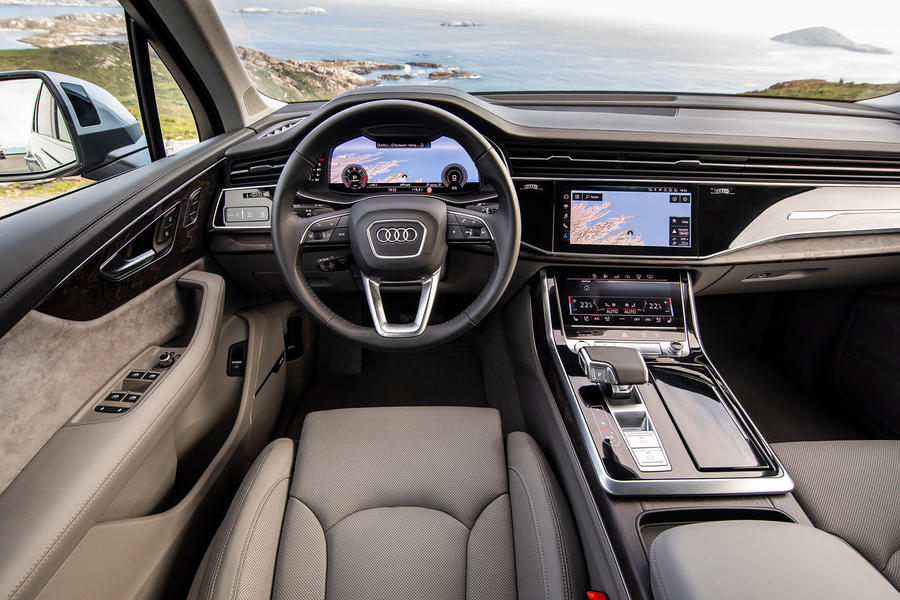 If you’re after a luxury SUV that offers a slightly elevated level of engaging road handling manners as well as impeccable rolling refinement, the likes of a Porsche Cayenne, BMW X5 or Range Rover Sport will likely be more attractive options than the Audi. At the same time, though, given its size it almost seems slightly moot to criticise the Q7 too greatly for not being the most thrilling car on the road. Because as a comfortable, impeccably refined luxury SUV, there’s really rather a lot to like here.

The quality of the cabin is certainly on a par with those of its rivals - in terms of both material appeal and practicality - and that 50 TDI engine is both impressively demure and meaningfully powerful. It now looks even more purposeful than before, too. Admittedly, it would benefit from a slightly more responsive, intuitive gearbox, but this is a small fly in what is an otherwise very appealing ointment. 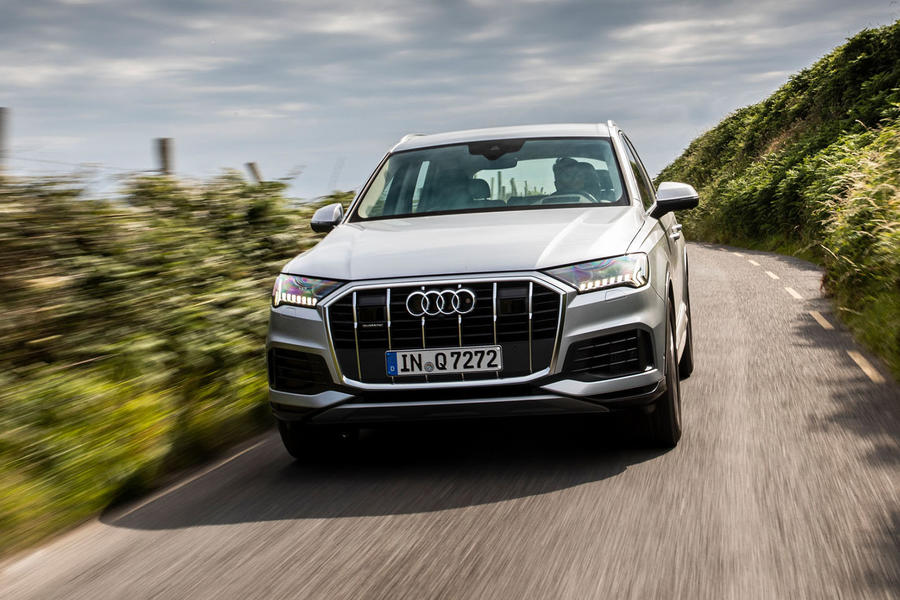 Too many cars try and fail to

Too many cars try and fail to be 'sporty' at the expense of the enjoyment of the car. If you wanted this type of car who cares how it carves up a B-road? Fair play to Audi for finally seeing some sense and tuning for effortless comfort.

Just looking for an excuse

Ever since I got mine, albeit last years 55tdi model, I've made every excuse under the sun to take the family on long runs, next one being to Southern Italy on saturday... at 90mph this thing is utterly unshakable and will get me about 450 miles to a tank.. the air suspension & drive train combination is very impressive so I am surprised that they still havent rectified the slow speed manner of the gearbox... it is the only issue with this car.. pull the lever back in to sport and its fine with no delay or hesitation at junctions, but as simon mentions its not really the done thing with 2.5 tonnnes.  They really should've fixed that..