7
Audi thinks the world needs a Q3 with a lower roofline and slightly less rear seat space. Does it?
Open gallery
Close

This isn't an Audi Q4, as logic might dictate, given the existence of the Audi Q7 and its similarly lower-roofed, sportified Audi Q8 sibling.

Nope, Audi has chosen the Audi Q3 Sportback tag, and not just because it’s an extremely literal term to describe the new car or because they want to retain a family tie. It’s also because the Q4 name will be used on a new electric SUV arriving next year.

Yes, the roof curvature has been dropped by 49mm, but it’s also a touch longer and ever so slightly slimmer than the Q3, while the front and rear end designs are notably different. In fact, no body panels are shared at all.

These SUVs with lowered rooflines never quite work aesthetically (BMW X4, we’re still looking at you), but we reckon Audi has done a decent job with the Sportback. In fact, this may be one of the only SUV-coupés that actually fulfils its brief in being more desirable than the regular SUV upon which it’s based. But then beauty (hmm, let’s not go that far) is in the eye of the beholder. 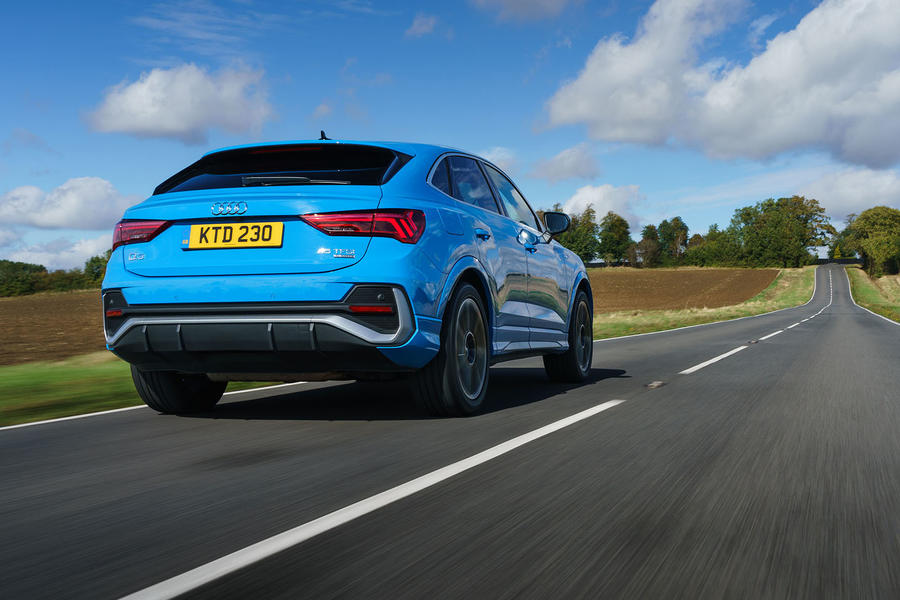 Audi has focused the visual differences for the Q3 Sportback externally, so you’ll forget you’re not in a standard Audi Q3 as soon as you hop inside, save for the shrunken viewing angle through the rear-view mirror.

That may put off some hoping for a more bespoke feel, but there’s little actively wrong with the interior. Far from it, in fact, because it's mostly up to Audi’s usually lofty standards of fit, finish, ergonomic simplicity and technology.

The Q3 Sportback doesn’t get the dual-touchscreen layout adopted by its larger siblings, and it’s all the better for it; knobs and buttons will always be far simpler to operate on the move. What has changed on the most recent Audis, however, is that it's easier to find cheaper bits of trim than it is on outgoing models such as the Audi A3. In the Q3 Sportback, it’s the bland, flimsy and plasticky air vents that will disappoint nitpickers.

Nevertheless, Audi has done a decent job retaining the Q3’s practicality with the Sportback. The increased length means it can claim the same 530-litre boot as its sibling, while leg room is decent. Those up to and slightly over six feet tall won’t have too much complaint with the rear head room, but this 6ft 3in frame found it difficult to sit upright in the seat without a tilt of the head. Reclining the backrests goes some way to solving this, but the Range Rover Evoque is more accommodating in the back.

Audi’s clear priority for the Q3 Sportback was to offer something more visually enticing, but it hasn’t totally neglected the ‘sport’ element of the name. To that end, the steering features a specific tune, while sports suspension is also thrown in (not a cost option here as it is in some markets). Our test car featured cost-option adaptive dampers, too.

By and large, the non-enthusiast driver most likely to buy this kind of thing wouldn’t notice a marked difference between the way this and the standard Q3 drives. Perhaps the steering is a bit keener to react to inputs, but it’s difficult to tell without driving the two cars back to back. Regardless, if it’s a composed and vice-free driving experience you’re after, the Q3 Sportback doesn’t disappoint.

What becomes more noticeable as a passenger compared to being behind the wheel is a firmer edge to the ride. It’s controlled and doesn’t thump or crash into imperfections, but there’s more of a constant fidget that's presumably intended to make the driver feel more aware of what’s going on beneath them. This tester prefers SUVs to isolate the surface, but others may welcome the more tied-down feel.

More of a disappointment was the powertrain we tried. With power and acceleration figures in the same ballpark as the Volkswagen Golf GTI, you might expect it to feel pretty perky, but it never feels as urgent as those figures suggest. It seems to have been tuned for smoothness rather than outright response: fine in essence but a bit underwhelming for what is a range flagship.

As noted in our European first drive, Audi seems to have calibrated the throttle to react lazily to inputs, while even the usually snappy dual-clutch automatic gearbox seems like it’s hungover, hesitating away from a standstill and showing a reluctance to kick down unless you stamp on the right pedal. Switching the driving modes goes some way to improve this, but it’s certainly no warm-up for the upcoming Audi RS Q3 Sportback in any respect. 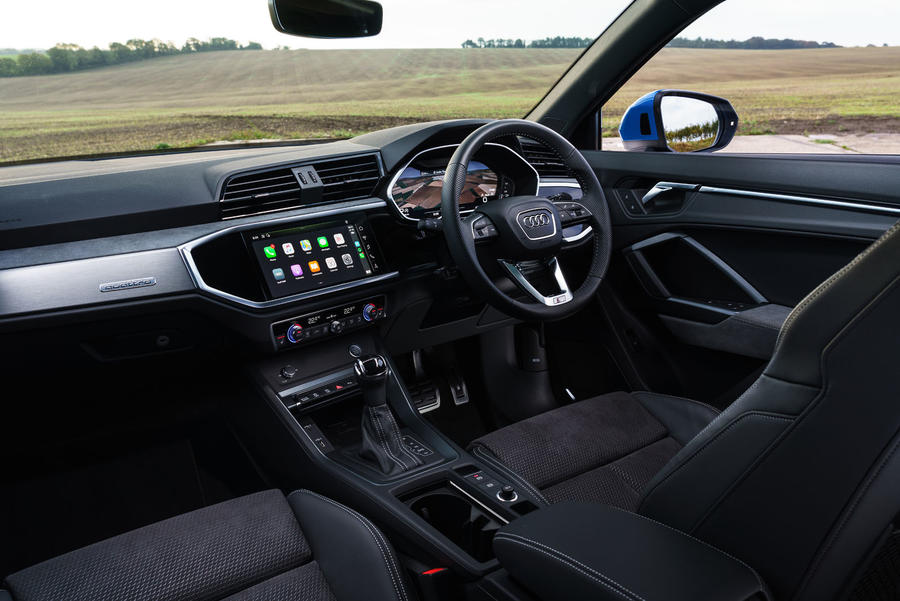 Make no mistake, despite our lukewarm feelings towards this pricey top-spec engine choice, the Q3 Sportback is a wholly competitive product and complements the standard Q3 well.

However, in a pool of increasingly talented rivals, it doesn’t do much to stand out. The Volvo XC40 offers a greater feel-good factor and more personality, while the Evoque is classier, roomier and more upmarket. The BMW X2 is more sporting to drive, too.

There’s no great shame in being competent in every area but sparkling in none, but in this trim and at this price point, the calibre of competition means the Q3 Sportback is worthy of consideration rather than a stand-out contender. Furthermore, the point still remains that the standard Q3 is the more complete choice. 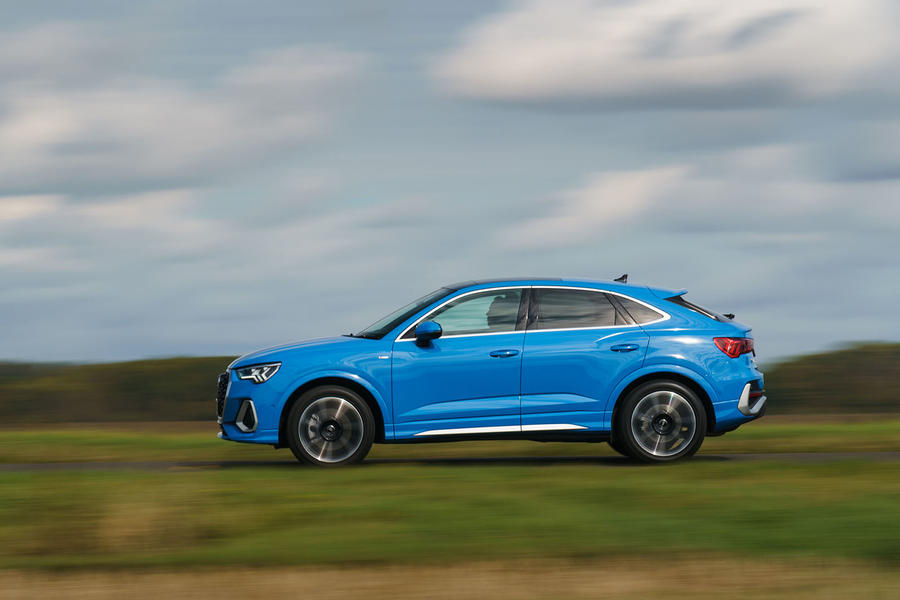 What an ugly rear.

why do people think coupe

For me, thats where the Velar falls down too. Birds eye view looks fine, but on the level, squashing the roof down just empasises the long rear overhang. Not a good look.

I’d never buy one, and don’t like the looks, but people can choose what they want, it’s their money. If not enough people buy them then they won’t get replaced in the next model cycle.

Only exception to my comment is the Honda Civic which is just hideous, badly proportioned, and offensive to the eye. Even then it’s your money.

I don’t know why people complain about too much choice. Let’s all drive Corsa’s then - they could be knocked out cheaper if the volume was increased, and would just be a tool to get from A to B.

I’d never buy one, and don’t like the looks, but people can choose what they want, it’s their money. If not enough people buy them then they won’t get replaced in the next model cycle.

Only exception to my comment is the Honda Civic which is just hideous, badly proportioned, and offensive to the eye. Even then it’s your money.

I don’t know why people complain about too much choice. Let’s all drive Corsa’s then - they could be knocked out cheaper if the volume was increased, and would just be a tool to get from A to B.

I agree with this entirely.

This latest fashion for ‘coupe SUV’s isn’t a segment I can ever imagine myself shopping in, but that’s fine. Calling them coupes does seem a bit silly in the (modern) traditional sense of the word, but also fine for the original meaning. I see them more as high riding hatchbacks, with the more conventional styled ‘SUVs’ as high riding estates. Fine to have both as it is with normal cars.

I’ll stick with my conventional estate, but I’m all for greater choice