From £15,7157
70th Anniversary edition 595 gets a host of upgrades and barrels along with a gusto that helps you forgive its flaws
Open gallery
Close

The 595 Esseessee is essentially a lightly modified version of the existing 595 Competizione that has been wheeled out as part of Abarth’s 70th birthday celebrations.

It marks the return of the Esseesse badge, which was previously the preserve of the Italian brand’s hottest models until it disappeared a few years ago when the Abarth 500 morphed into the 595.

So what’s new? Well, the most obvious change externally is the adoption of the neat 17in multi-spoke alloy wheels that are an Esseesse trademark, while elsewhere it gets the same recently reprofiled bumpers as the standard 595. Inside, there’s a pair of bespoke figure-hugging Sabelt high-backed seats with a carbonfibre shell and some natty red stitching, while carbonfibre trim also covers the pedals and the dashboard. It contrasts a little jarringly with the otherwise cheap-and-cheerful plastics, but most of what you see and touch feels of decent quality. Elsewhere there’s a TFT instrument pack and a turbo boost gauge sitting in a pod just to the left of the steering wheel. It’s not exactly tasteful, but it’s completely in keeping with the 595's fun-loving character.

Under the stubby bonnet is the familiar 178bhp turbocharged 1.4-litre engine, but here it breathes in through a BMC filter and exhales from a switchable carbonfibre-tipped Akrapovič twin exit exhaust. There’s no more power than the old Competizione, but the Esseesse gets that model's Brembo callipers for its 305mm front discs, plus a limited-slip differential. The suspension is largely carried over, including Koni’s frequency selective dampers. All very promising. 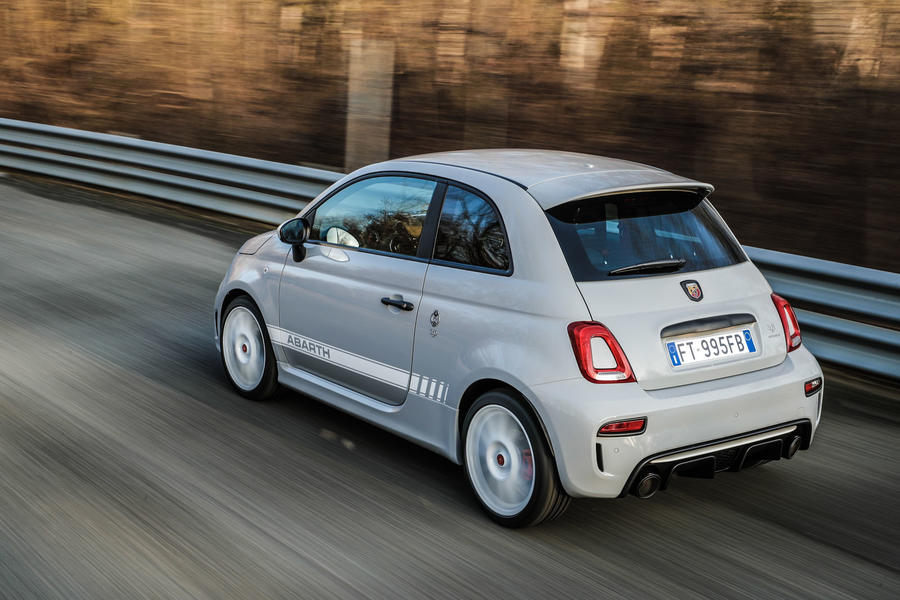 It's good in a bad sort of way. Essentially, the 595 is based on the same platform as the previous-generation Panda, which is getting on for 16 years old now. As a result, it's shot through with numerous compromises that hobble any claim on the title of ‘ultimate hot hatch’. The Ford Fiesta ST is leagues ahead in terms of performance, outright ability and driver involvement, while even a car such as the slower Volkswagen Up GTI has the Esseesse covered in most dynamic areas. Yet despite this, it’s hard not to get at least a little bit swept up in the 595’s fizzy and frenetic character.

With Sport mode selected to open the valves in the exhaust (and sharpen the otherwise leaden throttle), the 1.4-litre rasps into life before settling down to a gurgling idle. Blip of the throttle and the burble is overlaid with faint turbo whistle, just like on the Abarth 124 Spider. It’s such an endearing sound that you’re almost willing to overlook the slightly old-school Italian long-arm and short-leg driving position, plus the high-set seat and pedals offset to the right. Still, those Sabelt buckets support in all the right places and the chunky steering wheel feels good in your hands.

Move off and the first word that comes to mind is ‘firm’. If you had two words spare, they would be ‘very firm’. On the pockmarked roads around our Turin test venue, the 595 bobbed over the surface with unwavering accuracy, rendering each imperfection in HD detail. Bigger potholes are simply too much for the short-travel suspension, with occupants occasionally launched out of their seats. Yet despite the stiffness of the set-up, the Koni dampers do a decent job of rounding off the sharpest edges, so while you're jostled, those sickening crashes you expect never come.

Pick up the pace and the suspension feels much better, those uprated dampers helping maintain strong control over everything but the most extreme bumps and compressions, and pretty soon you’re bobbing and weaving down the road, darting through corners and taking multiple lines that are the preserve of truly small cars.

There’s decent grip too, the Abarth clinging on gamely until the front eventually starts to wash wide. You sense this eventual small slide through the seat of the pants and your eyes rather than the steering, which is quite slow off the straightahead and lacking much feel. In Standard mode, the electrically assisted steering is fingertip light, while switching to Sport adds too much weight and a sticky resistance.

Curiously, the mechanical limited-slip differential doesn’t play as big a part as you’d hope, as there’s none of that tightening of line you get from similar setups as you get on the throttle mid-corner. It’s only when the car is almost straight do you feel that trademark stiffening of the steering as the front wheels dig in and find traction.

Still, the 595 is reasonably quick across the ground, the turbocharged motor pulling with real vigour from around 2000rpm, accompanied by a rasp from the exhaust that’s just the right side of antisocial - although the Akrapovič system doesn’t have the same childishly brilliant pops and bangs on the overrun as the standard Competitzione’s Monza set-up. The Brembo brakes are good too, delivering strong stopping and a progressive action. And while the pedals are offset, the accelerator and brake are perfectly placed for some cheeky heel-and-toe downshifts. Only the action of the five-speed gearbox disappoints. The lever is set handily high, but the action is a bit loose and the clutch has a mushy feel.

The rest of the 595 is pure Fiat 500, which means it's cramped for both occupants and their luggage, while the infotainment system is lagging behind the best for ease of use and graphical clarity. And while it feels solidly built, some of the materials used (particularly on the dashboard's top and lower down in the cabin) would feel cheap on a car at half the price. 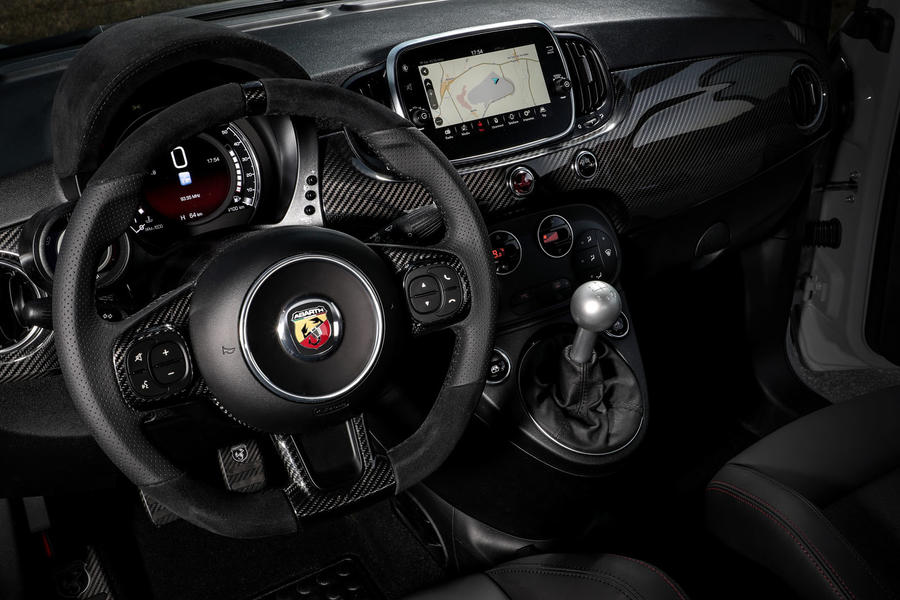 In all objective analysis, the 595 is outclassed by pretty much any rival you care to mention. Factor in the £25,295 price tag (£27,295 if you go for the 595C with its roll-back roof) and it becomes even harder to recommend, especially when the mechanically virtually identical Competitizione is £3500 less. Yet despite all that, there’s an undeniable charm to the Esseesse.

For starters, it really does look good, its white wheels and Abarth graphics giving it real pugnacious kerb appeal. And when you’re barrelling and bouncing along a twisty road, the throaty exhaust burbling and burping away, it’s hard not to get swept up in this four-wheeled ball of hyperactive energy.

At this money, you really, really have to want one, especially against cheaper opposition such as the brilliant Ford Fiesta ST. But in a world of increasingly homogenous and slickly set-up cars, the fun but flawed 595 still has its place. 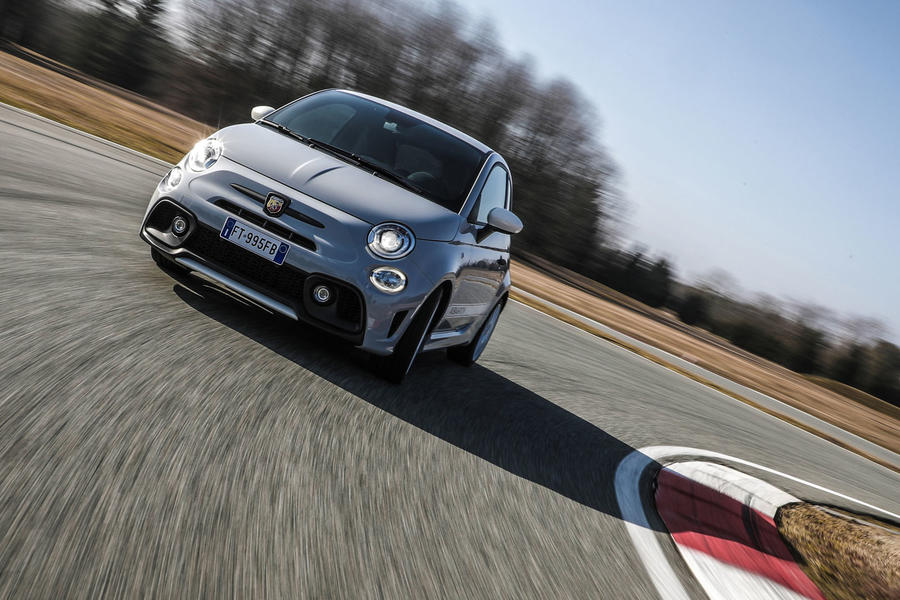 You'd have to be the saddest and most joyless of joyless sad sacks not to see the appeal.
xxxx 21 June 2019

i should really like these, but i can't stop staring at the front overhang! Stop messing around, put an alfa v6 where the back seat should be, and make it look more like the original

500s are great little cars to

500s are great little cars to drive and price aside this is great, would like to see an abarth with less aggressive and more retro styling personally. It is amazing that it still uses the original modern panda platform when it's successor was a more modern platform and was discontinued.