BACK TO ALL NEWS
Currently reading: Used car buying guide: Ford Focus ST
UP NEXT
Two worlds collide: Porsche Taycan vs Alpina B3

The Ford Focus ST Mk2 is an appealing, affordable and tunable hot hatch, although it’s not without its issues, as we discover
Open gallery
Close

Not only is the Ford Focus ST Mk2 of 2005 to 2011 one of the great hot hatches but also, thanks to high numbers of used ones, it shouldn’t be too difficult to find a good one that fits your budget.

Fill your boots with any number of ST-2s or 3s. The basic ST-1 is rarer and not worth bothering with, unless condition and price swing it. The ST-1 has cloth-covered Recaros; the ST-2 has Xenon headlights with washers, a heated windscreen, ESP and two more speakers; the ST-3 has leather Recaros front and rear and those rear seats are a two-seat bench, while the ST-1 and ST-2 have a three-seat affair.

As the Focus Mk2’s end drew near, post-2010 ST-3s gained DAB, dual- zone climate and privacy glass. On older STs, when mileage and condition exert a greater pull, there’s little difference in the prices of ST-2s and 3s. That said, a fourth version, the ST-500, might just command a small premium on the grounds of spec and relative rarity. 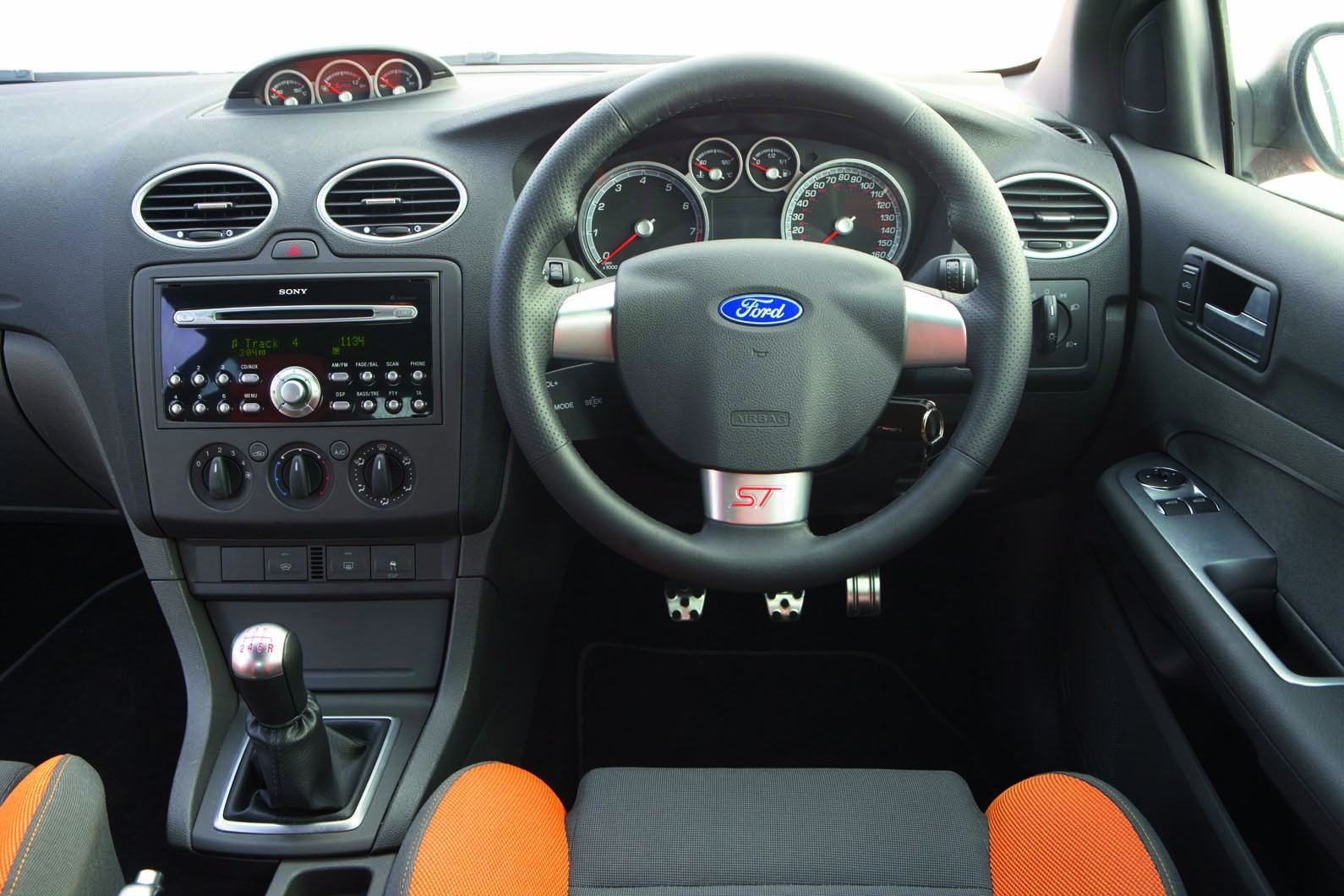 This ST-3- based run-out was launched in 2007 ahead of the 2008 facelift and offered only in Panther Black, with red leather Recaros, extra detailing, special badging and a heat-reflecting windscreen. One dealer wants £5490 for his 2008 car with 124,000 miles and a full Ford history (19 stamps). The facelift brought a restyled nose with new headlights and wings while the tail got a new bumper and diffuser.

The dashboard was dressed in fake carbonfibre, the ignition went keyless with a power button and the ST-1 finally got ESP. Those are the features to expect but under the bonnet is where the fun lies. Yes, that really is a five-cylinder, 2.5-litre turbocharged Volvo engine you’re looking at. Forget stately forays to Acorn Antiques, though; in the Focus ST it produces 222bhp and 236lb ft. A sound symposer directs its delicious burblings to the cabin.

Expect to find plenty of remapped examples. Those fitted with the Mountune Performance Pack are worth digging out, with power rising to 252bhp and torque to 295lb ft. 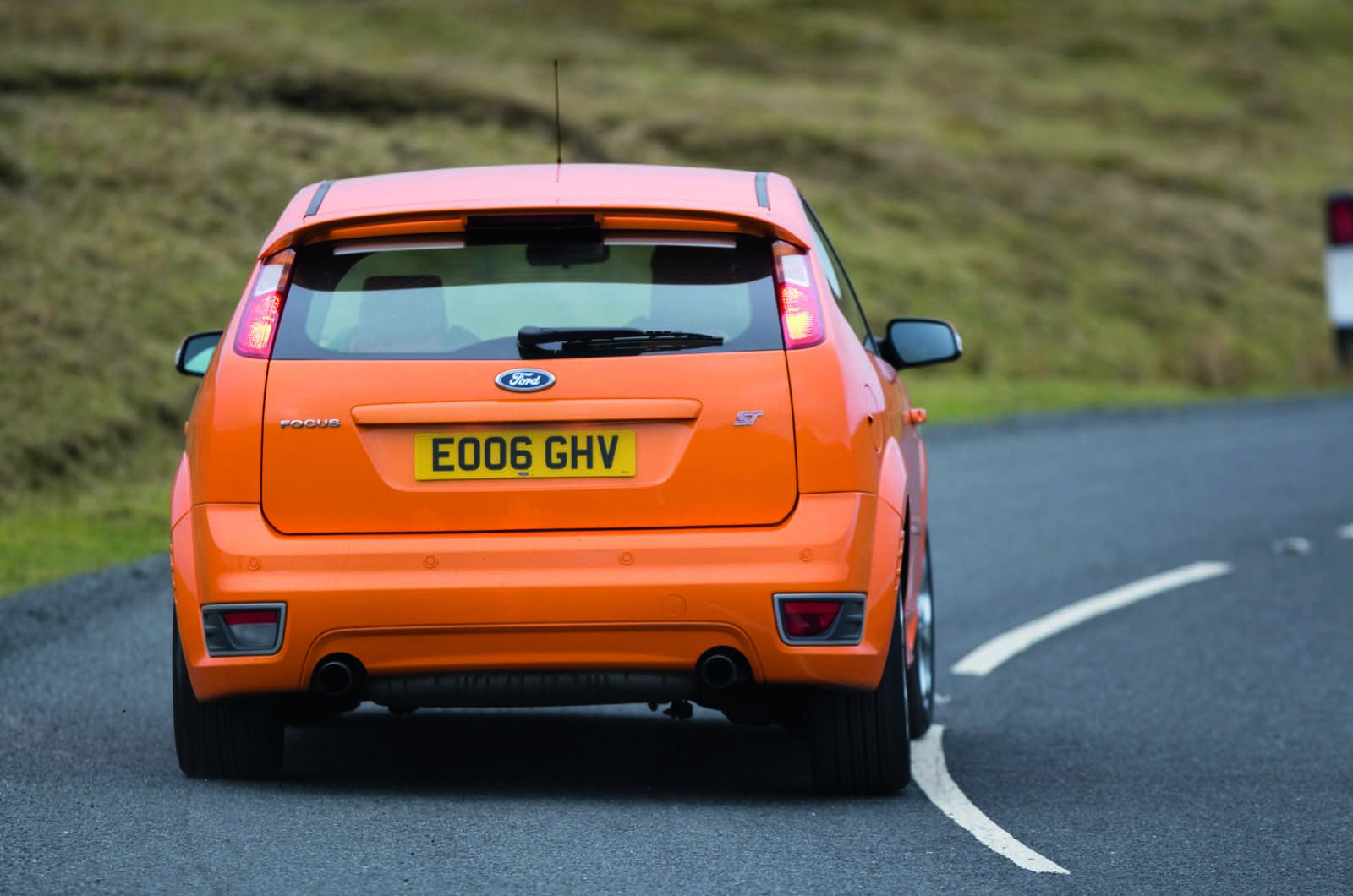 A Stage 2 tune to around 300bhp shouldn’t require strengthened internals but expect evidence of such work beyond this. When looking at an early ST, and especially a tuned one, check the oil filler for oil andwater sludge and the clutch for slipping. Pre-facelift and modified cars are known for splitting their cylinder liners and cooking the clutch; the 2008 facelift resolved many of these problems.

Given the number of used Mk2 STs on the market, you can afford to be picky – not just over condition but specification and options too. Among the latter, those worth seeking out include privacy glass, parking sensors and an electric sunroof. Prices of three- and five-door STs are broadly the same. Colour- wise, the plainer shades emphasise the car’s nicely understated looks. Whichever hue you choose, a full book of service stamps and premium tyres are essential, and beware the Cat C and D write-offs out there.

An expert’s view, Steve Bennett, ST-FOCUS.COM: “To my mind, the Focus ST Mk2 is the greatest hot hatch ever. I love the idea that one day a Ford exec said: ‘I know, let’s chuck this big old five-cylinder motor in a Focus.’ I’ve been selling them for more than eight years and I’ve sold hundreds. It has its niggles – split liners, weak clutch, whistling oil filler – but they’re rare. On the whole, it’s reliable. Prices for the best late cars have stabilised. You’ll easily pay over £11,000. Partly it’s because the current car isn’t as good and partly because late, low-mile Mk2 STs are getting rarer. Buy one while you can.” 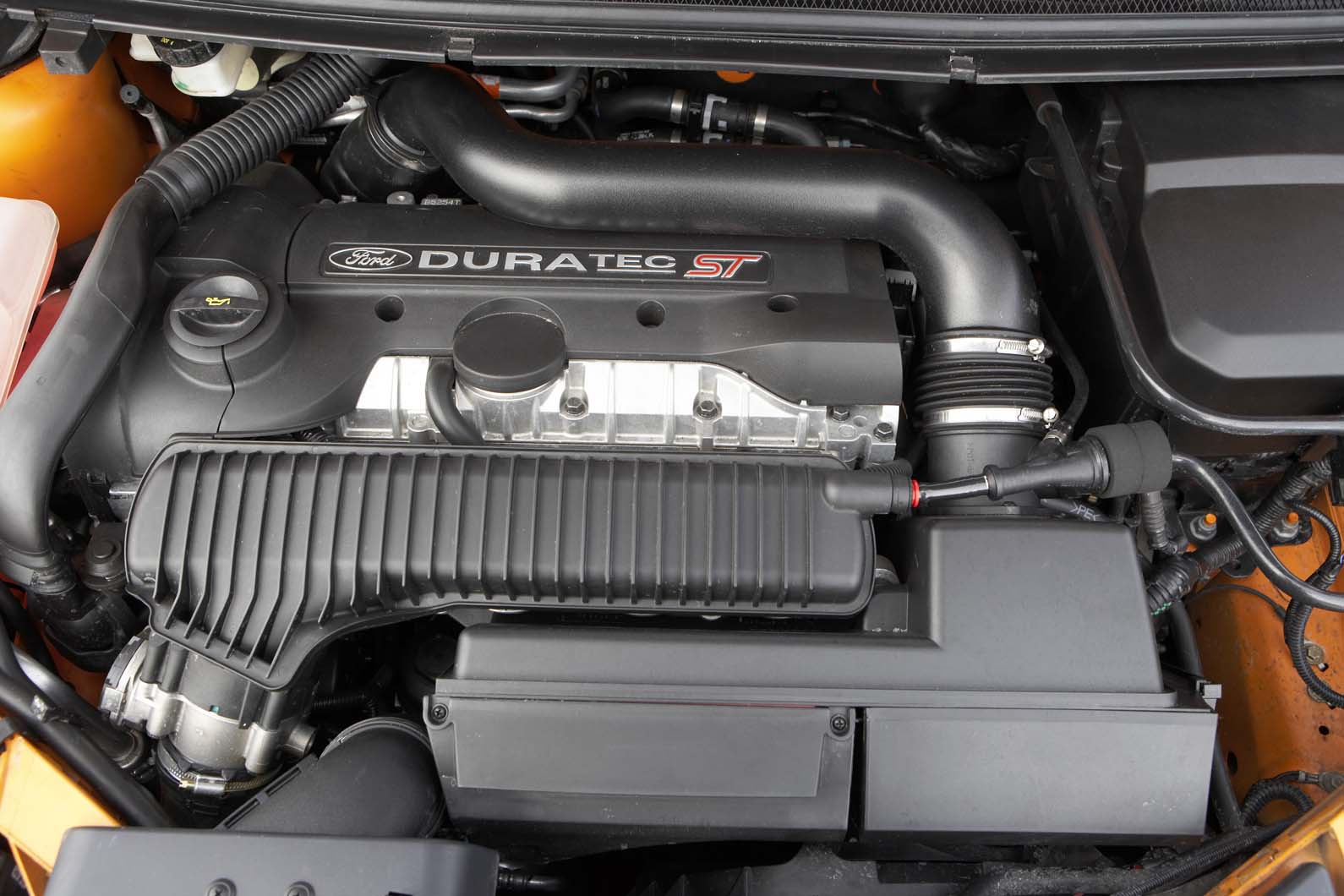 ENGINE: On pre-2008 STs or modified cars, check for oil-filler mayonnaise, misfiring or white smoke indicating split cylinder liners. A whistle at idle when cold is air being drawn through the oil filler due to a split diaphragm in the oil filter housing. If the boost gauge needle won’t pass beyond a quarter, check the solenoid boost valve (a healthy turbo reads to half- way; a mapped car to three-quarters). On early cars, check the health of the alternator–flickering lights or a battery warning are giveaways. 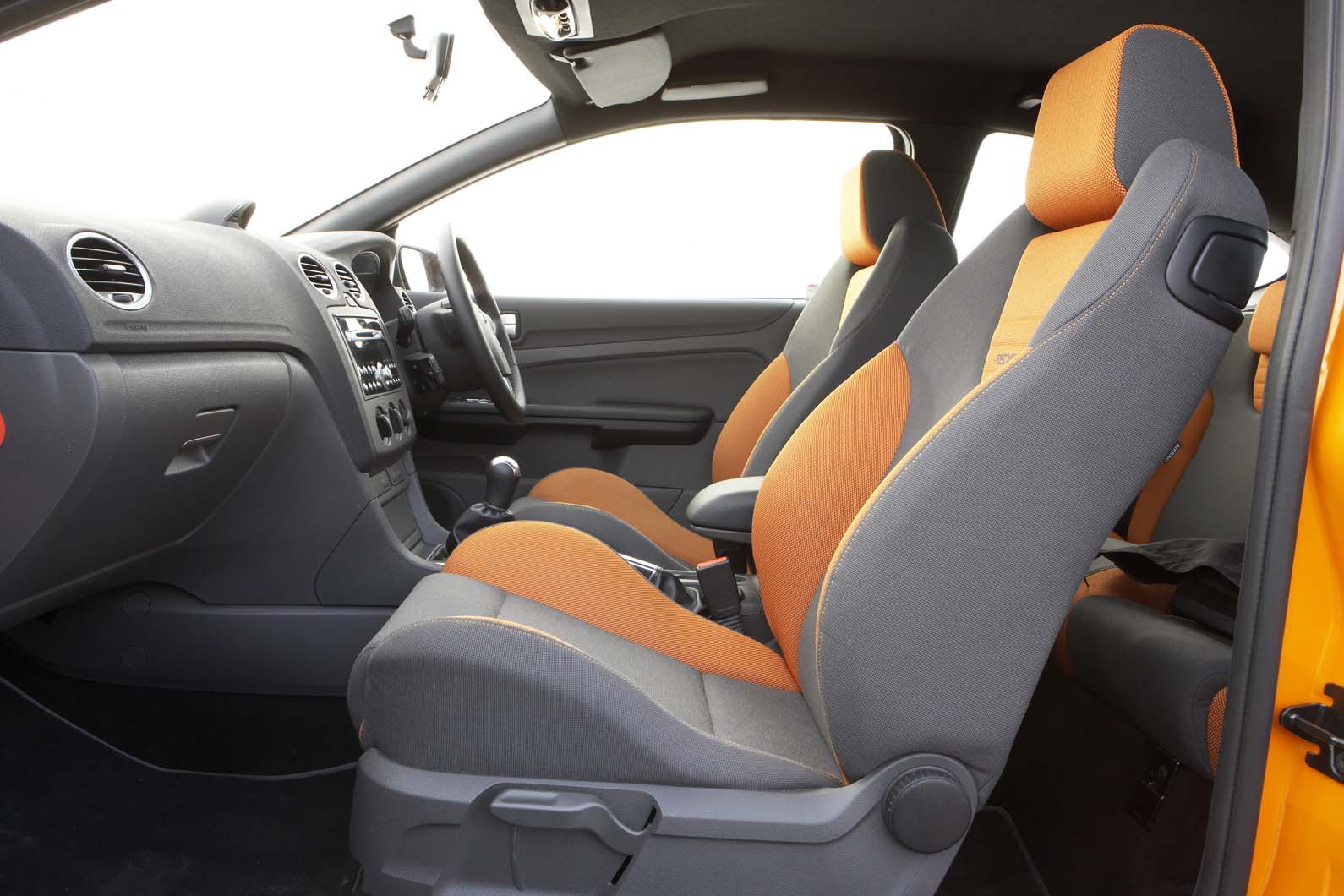 BODY: Check the boot for dampness (rain can get in via the seam near the tailgate hinges) and screen wash bottle for leaks. Check sideskirts are secure and look for corrosion where rear arches meet the bumper and on boot bump stops where the paint flakes. Check for crash repairs (orange-peel paint finish, overspray, new wing bolts etc).

Some modified STs will have had their liners shimmed – what’s called a ‘block- mod’. It’s only done to a sound engine. Expect to pay around £800 for the job (it involves removing the head to push shims between the cylinder liners), a new timing belt and a new water pump. Try motorsport-developments.co.uk. 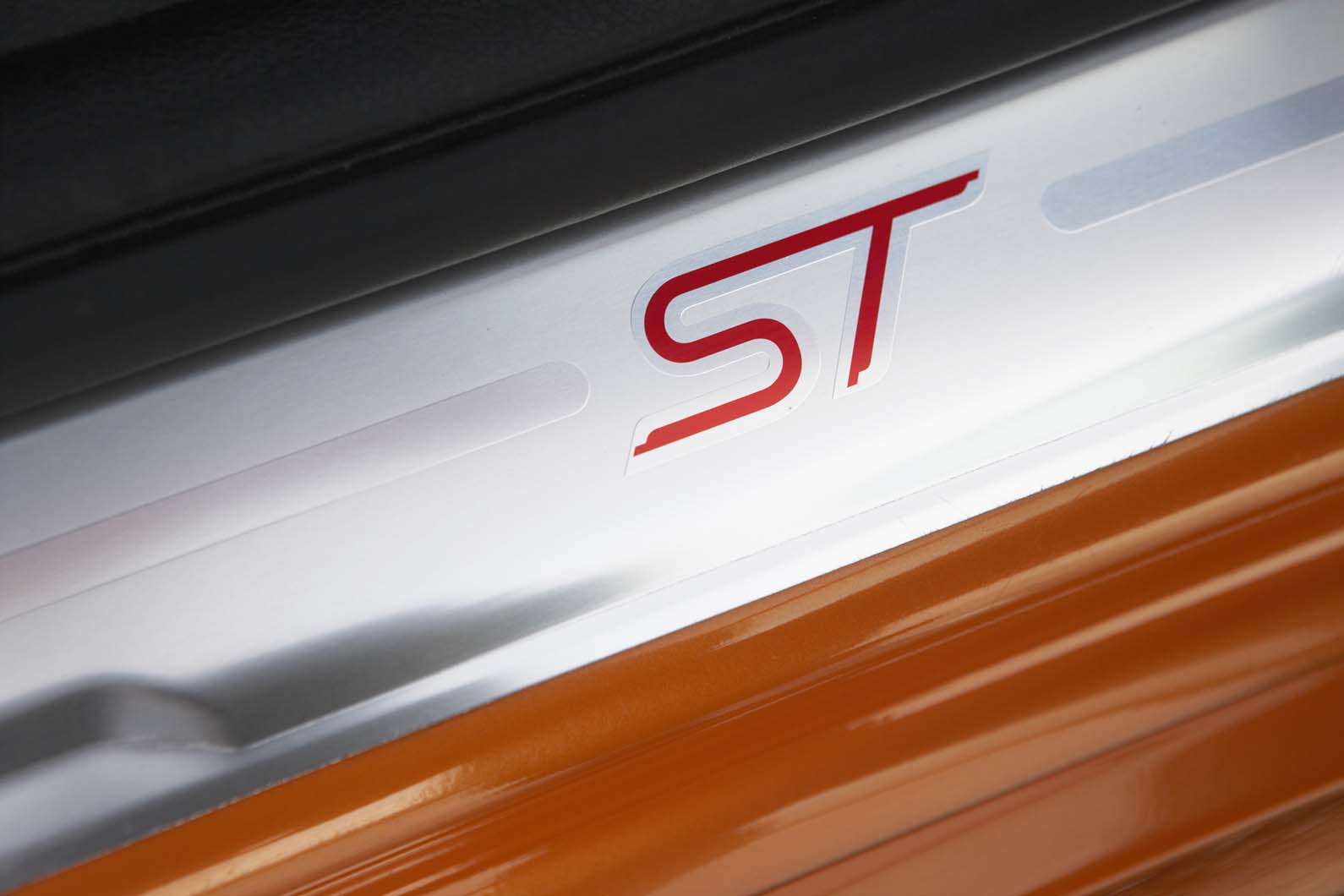 Big miles but this car has a full Ford history and a recent cambelt and water pump. It has an upgraded exhaust, a long MOT and its two keys. Bodywork is described as ‘clean’ and tyres ‘good’

I thought I would add some long term commentary about the Ford Focus ST MK2 (ST-3).

I owned the second generation ST Focus and did in excess of 110 miles.  In fact, I sold the car with 130,000 miles on the clock.  I purchased the car in 2008 (on a 2007 registration) with 20'ish thousand miles on the clock already.  The car was 10 months old and in very good condition, with the exception of some curbing on the wheels.  But £50.00 a wheel later and they were as good as new.

In fact, the White Paint with the Blue ST lines along the bottom of the doors looked great and in the time that I owned the car, it never looked tired or aged.  Unlike me!

Like most ST's, my car was a daily and was used for everything, from the school run, to work trips and hooning around on a B-Road.  No garage queen here!

In the 110,000 miles that I covered in this car it never went wrong.  I had 1 manufacures recall and Ford replaced the part.  Otherwise, the car went for its regular service and tire changes.  But that was it.

As mentioned I purchased a MK3 ST Focus, in a Petrol engine.  Like its predisessor, it was a very, very good car.  A car that covered 55,000 miles in only 2.5 years.  Like the car before it, it was reliable, well made and lots of fun.

Lets hope the MK4 Focus ST can live up to the hype and expectations of those that come before it.

I hope this helps.