BACK TO ALL NEWS
Currently reading: Vonnen 2019 Porsche 911 hybrid: full details and first drive
UP NEXT
New 2023 Audi A4 Avant undergoes tests in the Alps

US firm Vonnen has created a plug-and-play hybrid system for existing 911s, and we've had some time behind the wheel
Open gallery
Close

Porsche’s own hybrid 911 is in the works, though a good while off yet. But the engineering might of Stuttgart has been beaten to the punch by Vonnen, a firm based in California’s Silicon Valley turning its hand to electrifying 911s.

Chuck Moreland, CEO of Vonnen, says about the idea: “it was a case of us sitting around talking amongst ourselves and thought, hey, wouldn't it be great if... And then we started exploring different ideas of how you might hybridise an existing 911 platform.”

That was three years ago, a proof of concept using a 996 as a basis underlined that it was possible. Moreland expands: “This is a C2, and what we did was we took a C4 transaxle, which has a yoke to drive the front, we put a motor in the tunnel and instead of taking torque out, we drove torque back into the transaxle to drive the rear wheels. It worked.”

That might have proved it would work, but there was more to come. The proof of concept motor didn’t take advantage of the gear reduction capabilities, so they took a second look. Moreland said: “Okay, cost be damned, what if we wanted to make this thing rip? What would we do?" And so we went back to the drawing board and this is what we dreamed up.” 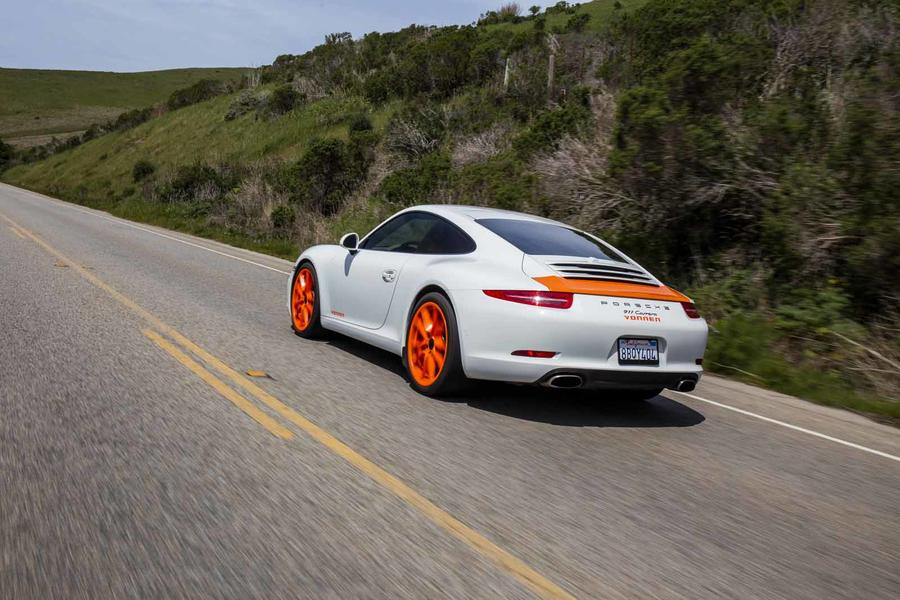 The result is the Vonnen Shadow Drive, a performance hybrid system that adds performance to any 911. To achieve that it squeezes an electric Motor Generator Unit between the flat-six engine and the gearbox, much like Porsche will eventually do with its 992. It replaces the flywheel, that electric motor also removing the need for the starter motor. It’s a tight fit, being around 25mm in depth, shifting the gearbox forward by the same amount - and requiring a 25mm shorter prop to the front if it’s fitted to a Carrera 4 or Turbo model.

The batteries powering it are placed under the boot floor, and while Vonnen is currently quiet about the capacity and chemistry, it’s enough for the motor generator unit to deliver a 148bhp and 150lb.ft boost to the car’s overall output depending on the driving mode selected. There’s additional cooling circuits for the motor generator unit and the inverter supplying it, independent of the internal combustion engine’s cooling as they all operate at different temperatures. The system’s weight is around 95kg, but net it’s around 77kg due to the removal of the flywheel and the starter motor.

The electronic control of the flat-six is completely unchanged, too, the Vonnen Shadow Drive’s control unit only reading CAN bus data regarding the throttle position, to allow it to add its electric boost when required. The PDK here gets a re-flash, to counter the slippage from the clutches would otherwise occur but otherwise the car doesn’t know the Vonnen Shadow Drive is there. 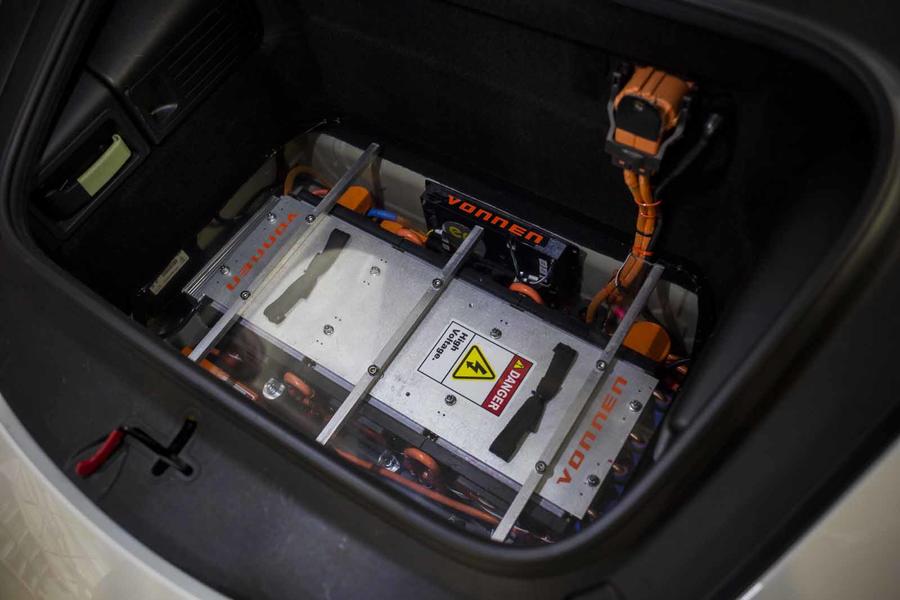 The system can be entirely off, with no electrical assistance at all, while the Street mode adds 90lb.ft of torgue when the accelerator is between 40-60%. Sport mode adds 80lb.ft between 65-95% throttle and an Overboost mode adds the full 150lb.ft at the same rate as in Sport mode.

The system is hugely flexible, too, Moreland says that it can conceivably be fitted to any 911, manual or PDK, standard or tuned, naturally aspirated or turbocharged right back to 1965, though earlier cars would need some additional microswitches and sensors to monitor inputs.

It’ll fit in the Boxster and Cayman, too. Along with the 991 PDK 3.4 Carrera it’s fitted in here, Vonnen is currently applying it to a GT3 for further development. The cost presently is $75,000, which is huge, but it’s pioneering tech, which adds big performance without having any detrimental effect on emissions. Here, in California, and, increasingly, worldwide, that’s hugely significant.

Forget hybrid tech for economy or brief electric-only urban motoring, the Vonnen Shadow Drive is for performance. There’s nothing inside to highlight it’s fitted - if you ignore the power inverter located under the rear window, Vonnen saying it could be positioned out of sight if customers prefer.

There’s a smartphone attached to the dash, too, which is nothing unusual today, only it’s running an app showing the status of the batteries, motor and the boost it’s delivering. 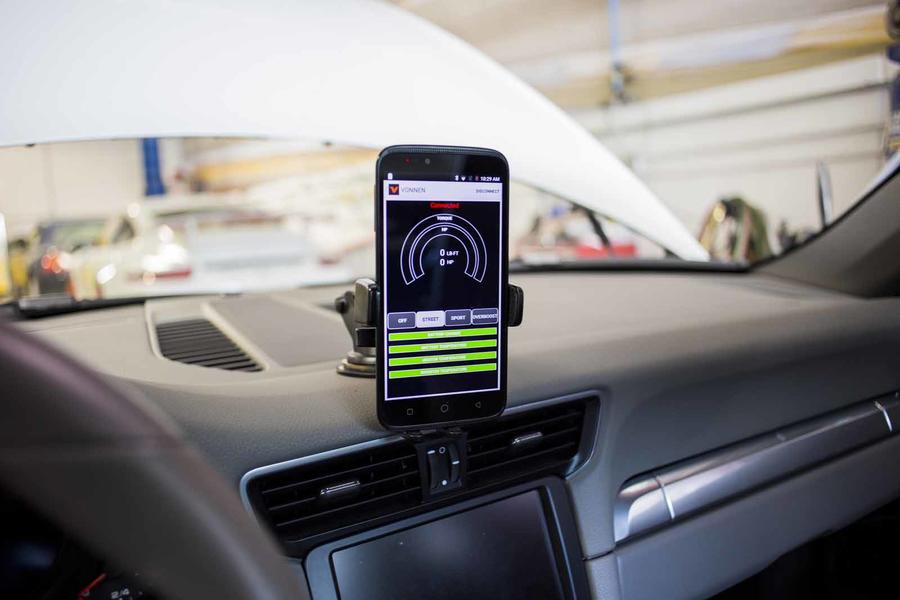 Switched to off the system does almost nothing, save starting the standard 350hp 3.4-litre flat-six engine and operating the stop-start system in traffic. Switch to Street and the changes are subtle at first, the need for the 40% and above throttle meaning you can drive around it. Where it really aids is flexibility in bigger gears, allowing you to be lazy with the gearbox, the motor generator unit adding that 90lb.ft at low revs, increasing tractability in traffic. On faster roads it’s more apparent, yet the electrically charged performance seems subtly applied. That is, until you glance at the speedometer.

It’s deceptively quick, it so linear and progressive in its delivery that you’ll find yourself carrying way more speed than you think. Near silent, too; there’s only a slight, not unwelcome, electronic pitch audible above the ordinary sounds you’d associate with the 911’s boxer engine. In Sport and Overboost modes the greater performance is more obvious, though there remains subtlety to the way it operates that’s counter to usual performance upgrade compromises.

With the electric motor working it’s supplemental. The Shadow Drive moniker is an apt description, enhancing without taking away from the standard car’s engagement, there being no obvious regeneration, the engine braking remaining all but identical. It’s clever, arguably a bit too clever at times; it might benefit from an earlier electrical application in Street mode to allow you’d feel the motor’s effect earlier.

The development is ongoing though, and Vonnen admits there’s opportunity for changes, it all in the system coding and application. What’s undeniable is the potential, something this Silicon Valley firm has been quick to realise in leaving Porsche to play catch-up.

...seems like at least they tried with a lightweight vehicle to begin with.

Some hybrids get a “pass” to use the High Occupancy Vehicle lane in freeways. I wonder if that is part of the motivation for buyers? Otherwise seems a pricey mod...