BACK TO ALL NEWS
Currently reading: New Rolls-Royce Ghost to gain bespoke illuminated fascia
UP NEXT
M6 toll – the UK’s most expensive – increases to £6.90

Rolls-Royce has continued the build-up to the unveiling of the new Ghost by revealing the first feature for the car that will be offered by its Bespoke arm: an illuminated dashboard fascia.

The new fascia element for the luxury saloon has been developed by the British firm's personalisation arm as part of the brand's shift to a 'post-opulent' design philosophy focused on 'purity'. It uses 152 LEDs to create an illumination featuring the Ghost wordmark and more than 850 'stars' in the passenger side dashboard when the car is in use. The display can't be seen when the car is turned off.

Rolls-Royce claims the fascia, which echoes the Starlight Headliner featured in previous models, took more than 10,000 hours of development across two years and involves more than 90,000 laser-etched dots carved into the surface of the dashboard.

The second-generation luxury saloon is due to be revealed next month, and Rolls-Royce has already confirmed that it will gain four-wheel drive, all-wheel steering and a raft of upgrades, with a number of measures taken to ensure it enhances its credentials by reducing noise inside.

Citing customer feedback affirming that interior comfort is a key consideration for customers, Rolls-Royce's designers undertook a process to minimise the noise disruption inside the cabin.

The process, which the firm called its Formula for Serenity, involved adding extra insulation to the aluminium chassis, with a double-skinned bulkhead section between the cabin and the 6.75-litre V12 engine to reduce noise from the unit. Sound-absorbing materials were also added in the roof, boot and floor.

Rolls-Royce then reviewed individual parts to minimise the noise they produced, for example smoothing the inside of the air conditioning ducts. To ensure the cabin wasn't disconcertingly quiet, the firm then undertook a process of "acoustic tuning", tuning each component to a specific frequency to create a single small noise, which it calls a 'whisper'. To do that, engineers developed new damping units for the seat frames and new ports between the cabin and boot.

The measures Rolls-Royce has taken to reduce noise in the new Ghost's cabin were outlined in the latest of a series of animated films, in which the firm has detailed several key features of the new car. These include a video highlighting the new all-wheel-steering system, previously seen on the latest Phantom, and the switch from rear- to four-wheel-drive.

Rolls-Royce has also detailed a new suspension technology making its debut on the Ghost. Called the Planar system, it features what the firm describes as a "world-first technology" in the form of an upper wishbone damper unit mounted above the front suspension assembly for "an even more stable and effortless ride". The system has taken three years to develop.

There's also the Flagbearer system, which uses cameras to read the road ahead and prepare the suspension, and Satellite Aided Transmission, which uses GPS data to preselect the optimum gear for a corner. 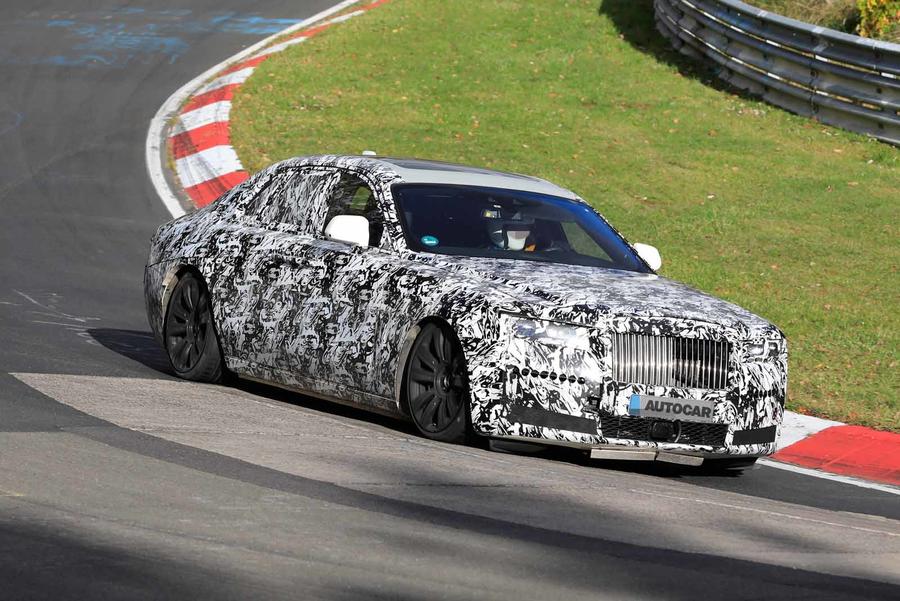 The new Ghost switches to the latest version of the Rolls-Royce aluminimum platform used by the Phantom and Cullinan SUV, and company boss Torsten Müller-Otvös noted the only components carried over from the successful original were the Spirit of Ecstasy figurehead and umbrellas.

"When it came to creating a new Ghost – one that outshines its incredibly capable predecessor – the engineering team had to start from scratch. We pushed our architecture even further and created a car even more dynamic, even more luxurious and, most of all, even more effortlessly usable.”

Rolls-Royce boss Torsten Müller-Otvös says that the new Ghost luxury saloon, set to be revealed later this year, will be “the purest expression of Rolls-Royce yet” with a ‘pure’ design to reflect a new trend towards “Post Opulence”.

The luxury car firm is currently putting the finishing touches to the second-generation version of the Bentley Flying Spur rival, and Müller-Otvös has attempted to smooth the path to the launch of the crucial machine in an open letter issued to prospective clients – and shared with Autocar – that tacitly addresses the challenge of launching an ultra-luxury car given the  ongoing Covid-19 pandemic. The firm has also release the first official outline sketch teaser of the car.

In the letter Müller-Otvös notes that since it was launched in 2009 the original Ghost has become the most successful model in Rolls-Royce’s long history, which he attributed to it being a car that owners could enjoy driving or being driven in.

He added: “They also appreciated the car’s pared-back simplicity, or as they put it, ‘a slightly smaller, less ostentatious means to own a Rolls-Royce.’ Going further, our clients expressed an ardent desire for even more minimalism in design.”

Müller-Otvös said the firm’s research showed that trend reflects a wider movement among luxury customers towards what Rolls has termed ‘Post Opulence’ – a move “towards luxury objects that celebrate reduction and restraint”.

While noting that Rolls-Royce models will always “inspire greatness and present a sense of theatre and magic”, Müller-Otvös said the new Ghost, which has taken five years to develop, will reflect that movement towards reduction.

“Ghost is the purest expression of Rolls-Royce yet,” wrote Müller-Otvös. “It distils the pillars of our brand into a beautiful, minimalist, yet highly complex product that is perfectly in harmony with our Ghost clients’ needs and, I believe, perfectly in tune with the times in which we are all living.”

The Ghost will be launched with a digital event later this year, which Müller-Otvös wrote would be preceded by a series of four animations giving an insight into “what we believe is the most sublime expression of Rolls-Royce yet.” 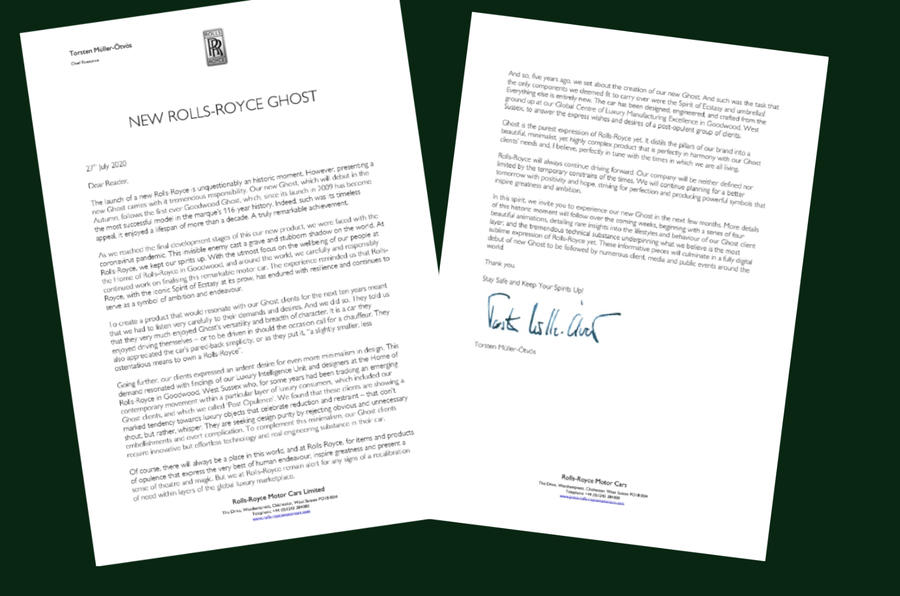 ...could possibly want an illuminated dashboard? This is surely the height of utter absurdity. I mean, the sparkly headlining was bad enough. Holographic dancing girls can't be far away...

....exactly teemacs. Absurd it is!

10,000 hours of development would have been better spent trying to design a car with Elegance in mind, rather that a 'brick' for inspiration.

Illuminated fascia has nothing to do with driving, nor luxury, nor aesthetics.

Looking forward to this.
RR owners are no different to you or I. Makes perfect sense to listen and respond to customers. Everyone wins.
View all comments (14)