New Chevrolet Corvette could get hybrid or electric versions

by Paul A. Eisenstein

The new mid-engined Chevrolet Corvette will feature electrified powertrains in the future – with a full electric version under consideration.

Chevrolet sources have confirmed the powertrain has been designed to allow for electrification, with insiders suggesting mild hybrid, plug-in hybrid and, while less likely, full electric versions were being considered.

Asked if an electrified Corvette might feature a mild hybrid battery-based starter motor, or use a small electric engine to provide four-wheel drive, one project member said: “You would not look stupid if you said that.”

When asked by Autocar about future electrified variants of the Corvette, the president of Chevrolet parent company General Motors, Mark Reuss, said: “The company is committed to a strategy of 0-0-0: zero emissions, zero crashes and zero congestion. All of the technology rolling into this vehicle is meant to support that. This platform can carry a lot of different things into the future for General Motors.”

Pressed on whether a fully electric Corvette was under consideration, Reuss said: “We’ll see. Stay tuned.”

Reuss did confirm that the Corvette would be produced in right-hand drive and will be sold in European markets, which will most likely include the UK. The outgoing C7 model was only available with a limited number of British dealers.

Chevrolet sources have confirmed that a convertible version of the Corvette will follow the coupé “in relatively short order”.

A British farewell to the C7-generation Chevrolet Corvette 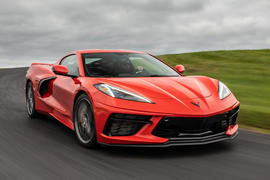 You go get something built in Britain for the same money then, and be blown out of the water on the streets and on the track.

It’s not strange, Chevrolet always declares a course on environmental friendliness, adhering to the 0-0-0 strategy: zero emissions, zero accidents, zero plugs and electrification of all new models including the Corvette Stingray 2020.do my homework for me