The Toyota Aygo has been reborn as a rugged compact crossover designed to "reinvent the A-segment".

Previewed by the Aygo X Prologue concept ahead of an expected market launch before mid-2022, the successor to the hugely successful city car has been designed, Toyota says, to "prove that cars traditionally referred to as an entry point can still deliver standout design".

Despite the raised ride height, 19in wheels and heavily flared arches (aspects that will likely be toned down for the production car), the influence of the existing Aygo is clear in its upright rear light clusters, glass bootlid, two-tone paint scheme and wheels pushed right out to the corners.

Off-road-inspired design cues include contrasting skidplates at the front and rear, chunky raised roof rails and distinctive hexagonal foglights. Uniquely, the concept also features "action cameras" mounted in its door mirrors for "capturing and sharing special moments of exploration," while a pop-out bike holder is integrated into the rear bumper. 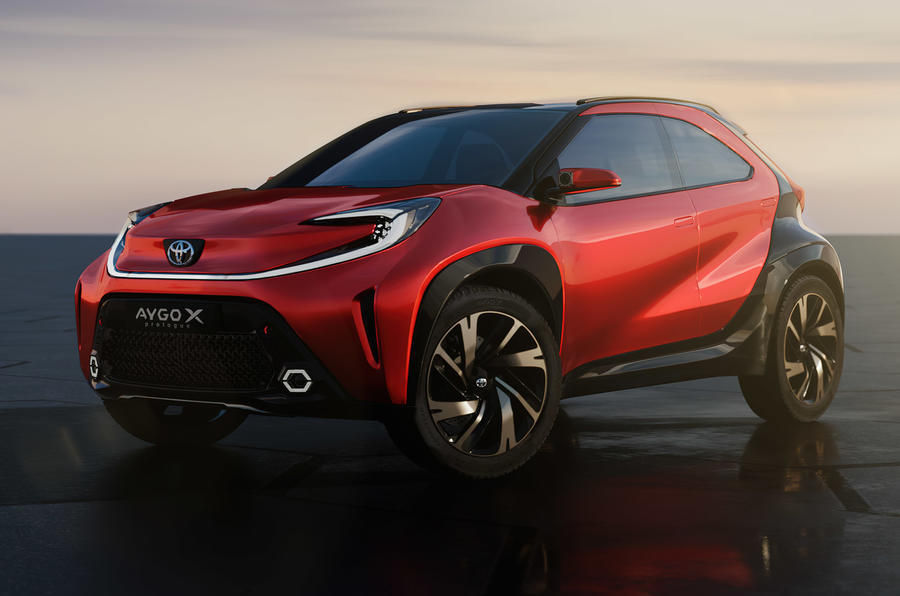 The Aygo X remains smaller than the Toyota Yaris supermini, with which it shares its GA-B platform, in terms of footprint: it's 3700mm long and has a 2430mm wheelbase. At 1500mm tall, however, it's about the same height as its sibling. For reference, the current Aygo is 3465mm long, 1460mm tall and has a wheelbase of 2340mm.

Toyota previously confirmed that the production version of the Aygo X will exclusively use internal combustion engines in line with its accessible billing. Specifications remain unconfirmed, but the Yaris's entry-level 1.0-litre three-cylinder petrol engine is a likely candidate, and the Aygo X will likely be available with either a five-speed manual or CVT automatic gearbox.

Ian Cartabiano, president of Toyota's European Design Centre in Nice, France, said: "Reimagining the A-segment means offering something new to the customer, and I love that [the Aygo X] has some of those crossover cues but looks more fun to drive and is definitely more on the urban side.

"The great side effect of the bigger wheel and tyre package - and the new platform - is that the higher hip point makes getting in and out quick and easy; it increases visibility, which is great for urban environments and country roads; and loading into the hatch is at a more natural height."

Cartabiano added that although the Aygo X is positioned "more as a crossover," he sees it as "a lifted hot hatch with some great usability and versatility". However, Toyota has yet to give any indication that the Aygo X will receive a hot GR-badged range-topper, as with the Yaris.

The Aygo X will remain Toyota's most affordable car in Europe, likely matching the current Aygo's £12,500 starting price, and also like the current car will be built in Kolín, the Czech Republic.

New 2022 Toyota Aygo gears up for launch in winter tests

The comments here are polarizing and heartening.  Sure, the more conservative will bemoan its over-earnest cues for an off-roader but the majority like it. The production car will naturally tone it down a lot and but I have to give Toyota credit. Like the Ford Ka or Juke back in the day that was a love or hate thing, they may just have done something that stands out for enough people that it could be a hit.

Commenter 18 March 2021
Great to see the return of the hoffmeister kink where the rear door joins the rear pillar now that bmw has largely abandoned it. The rear could be mistaken for Volvo c30 if it is not for the joining of tail lights at the bottom. Possibly Toyota's best styling effort for the past few decade.
abkq 17 March 2021
This is a toy manufacturer's idea of a car. It's all styling.
Toyota already had a superbly designed city car, that's the iQ, from which this hideous thing learnt nothing.
View all comments (19)