BACK TO ALL NEWS
Currently reading: Mercedes 300 SLR is most expensive car ever sold at £114m
UP NEXT
Lotus Emira vs Porsche 718 Cayman

Mercedes 300 SLR is most expensive car ever sold at £114m

A 1955 Mercedes-Benz 300 SLR Uhlenhaut Coupé has become the most expensive car ever sold after changing hands for €135 million - the equivalent of £114.4 million.

The car - previously owned by Mercedes-Benz - was sold in a private auction run by RM Sotheby’s at the Mercedes-Benz Museum on 5 May.

The buyer has chosen to remain private, with the winning bid being placed on their behalf by Simon Kidston, head of historic car specialist Kidston SA.

The £114.4 million hammer price is a new world record price for any car, more than doubling the previous record, which was held by a Ferrari 250 GTO when it was sold in 2018 for £52 million - less than the bidding price opened at for the 300 SLR.

Just two 300 SLR Uhlenhaut Coupés were made by Mercedes-Benz, taking their name from the firm’s chief engineer, Rudolf Uhlenhaut. The car was designed as a road-going version of the W 196 R grand prix car, with an enlarged 3.0-litre straight-eight engine allowing it to hit speeds of up to 180mph.

The car sold was chassis 00008/55 - the second of the two cars built and the one that Uhlenhaut himself used frequently. The sale makes the 300 SLR one of the top 10 most expensive items ever sold at auction. 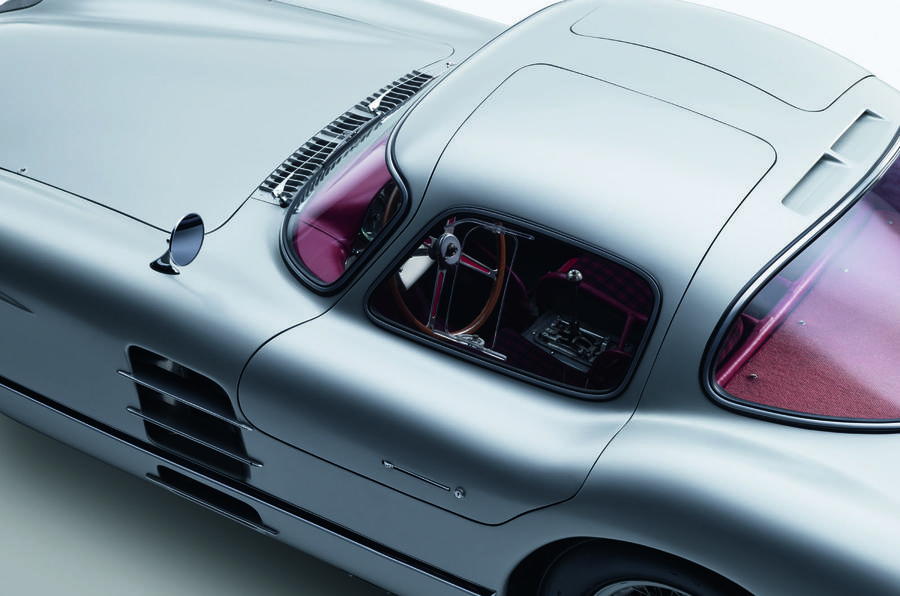 All proceeds from the sale will be used to establish a worldwide “Mercedes-Benz Fund”, which RM Sotheby’s says will aim to “provide educational and research scholarships in the areas of environmental science and decarbonisation for young people.”

Simon Kidston, who placed the winning bid for the unnamed buyer, said: "If you had asked classic car experts and top collectors over the past half a century to name the most desirable car in the world, there's a good chance that they would have come up with the same model: the Mercedes-Benz 300 SLR. It's a combination of exotic engineering, all-conquering racing history, the power of the three-pointed star on its nose and the fact that one had never, ever been sold. Many collectors had tried, all had failed.

“That was what the entire motoring world thought, but times change, and if you don't ask, you'll never know. A long-standing relationship with the Mercedes-Benz Museum helped, but even after 18 months of patient lobbying, we didn't know if or how they would consider letting the 300 SLR out of captivity until just before it happened. For everyone involved, and especially the new owner whom we represented, this was a once-in-a-lifetime chance to buy the Mona Lisa of cars."

Marcus Breitschwerdt, Head of Mercedes-Benz Heritage, stated that the car will still make public appearances, saying: “The private buyer has agreed that the 300 SLR Uhlenhaut Coupé will remain accessible for public display on special occasions, while the second original 300 SLR Coupé remains in company ownership and will continue to be displayed at the Mercedes-Benz Museum in Stuttgart.”

Peter Wallman, RM Sotheby’s UK and EMEA Chairman, said: “Words can’t really do justice to the importance and significance of this sale. It’s reasonable to say that nobody ever imagined that this car would ever be offered for sale, so for Mercedes-Benz to ask RM Sotheby’s to conduct the auction was an absolute honour.

All proceeds from the sale will be used to establish a worldwide “Mercedes-Benz Fund”, which RM Sotheby’s says will aim to “provide educational and research scholarships in the areas of environmental science and decarbonisation for young people.”

'Peter Wallman, RM Sotheby’s UK and EMEA Chairman, said: “Words can’t really do justice to the importance and significance of this sale. " '

What a load of hyperbolic drivel. All this car proves is that we're teetering on the edge of the economic precipice. When the money supply is sufficient that someone pays £114 million for this relatively unremarkable car that could be replicated from the ground up for a fraction of the cost (it's not a terribly exotic bit of machinery - try creating a Porsche Carrera GT from scratch or a McLaren F1, not viable. But you could make one of these for far less than £114 million), it augurs poorly for the future. It's ludicrous decadence, utter corruption of value.

Yeah, great looking car, but, where's the article?, a bit more meat in the Sandwich?