McLaren has finally confirmed technical details of the high-output hybrid powertrain of its new Speedtail hypercar.

The Woking-based firm has previously said its 250mph flagship packed a 1036bhp petrol-electric system, but has given no further details in the 18 months since it was revealed. Now, though, it has been confirmed that underneath the Speedtail's swooping rear deck is an evolution of the firm's twin-turbocharged 4.0-litre V8, mated to a high-capacity electric motor.

The petrol engine is said to feature technology first applied to McLaren's previous hybrid hypercar, the P1. With a lighter air intake, reconfigured cylinder head cooling system and redesigned pistons, it alone produces 747bhp and 590lb ft, up from the 727bhp and 531lb ft produced by the P1's 3.8-litre unit.

The electric motor, contributing more than 308bhp, uses similar technology to that found on Formula E racers. It takes its power from an "extremely compact" 1.6kWh battery pack, which has a power density four times greater than that of the P1's battery pack and is said to deliver "the best power-to-weight ratio of any high-voltage battery available today". 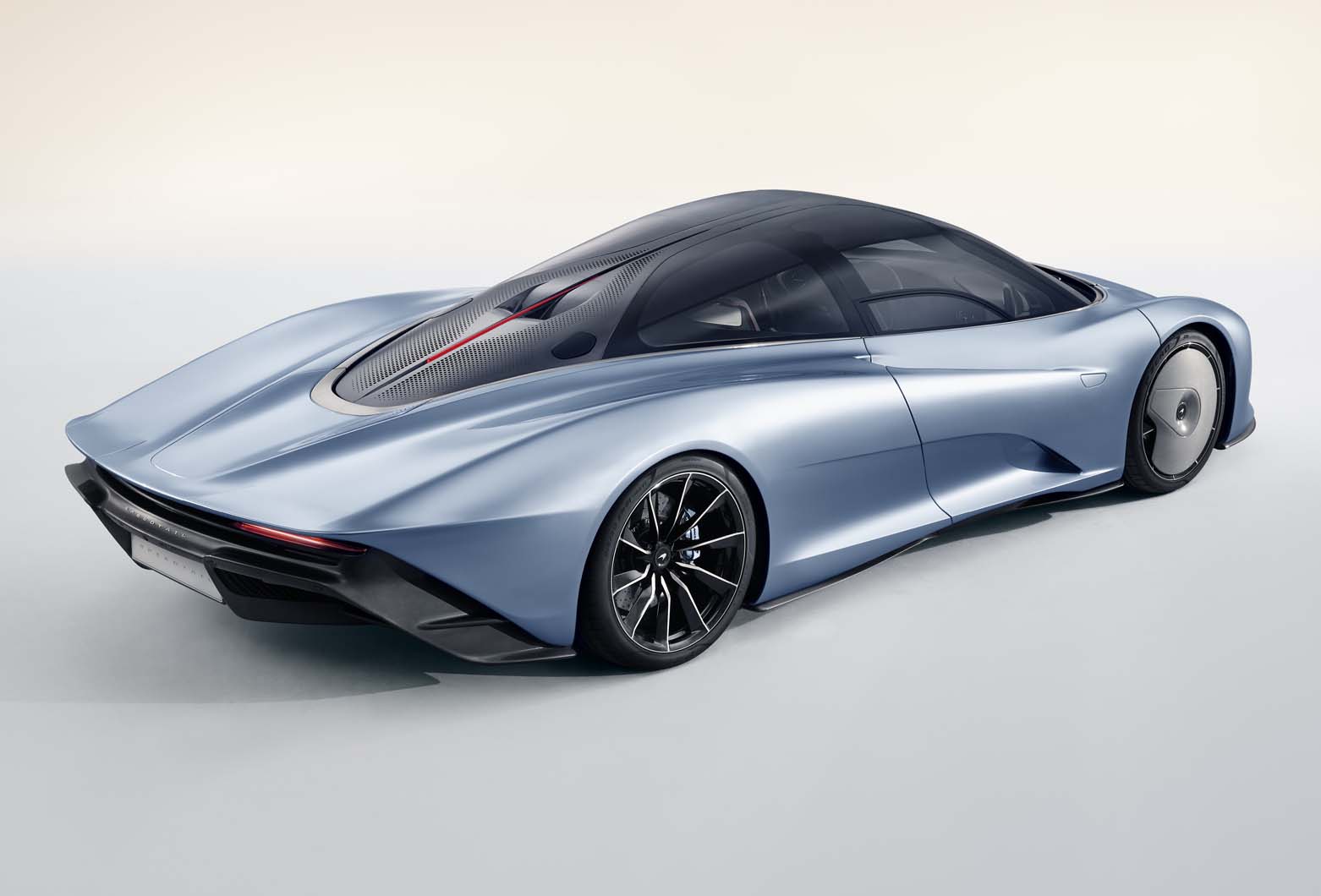 At the Speedtail's unveiling, McLaren claimed this powertrain would be capable of pushing the car to 250mph, a feat it eventually achieved at the end of 2019 as it conducted final high-speed tests at the Kennedy Space Centre in Florida.

The new machine is the latest in the Woking marque’s Ultimate Series and is the spiritual successor to the 1992 F1, featuring a similar three-seat cockpit with a central driving position. The Speedtail will be produced in a limited run of 106 models, matching the production run of the F1. All have already been sold at a cost of at least £1.75 million plus taxes each.

The Speedtail’s 250mph top speed is short of the record 278mph achieved by the Koenigsegg Agera RS, but Andy Palmer, McLaren’s Ultimate Series vehicle line chief, said the car’s design as a hyper-GT meant the firm has no interest in chasing the record.

“This is the first car that we’ve felt we could comfortably go beyond [the F1’s top speed] with," he said.

"The 250mph speed is due to a balance of comfort and tyre [capabilities]. It’s still got to be a usable GT car, and there’s a trade-off.

"We could make something that would go faster, but you’d have to make the car and the tyre sidewalls much stiffer. We’re balancing a mature, stiff ride with comfort and speed. The vision was to produce a sleek grand tourer.”

As well as the 250mph top speed, McLaren said it is the quickest-accelerating car it has produced. The Speedtail is capable of 0-186mph (300km/h) in 12.8sec, the firm said. By comparison, the P1 takes 16.5sec to reach that speed. McLaren is working with Pirelli to develop bespoke tyres for the Speedtail. 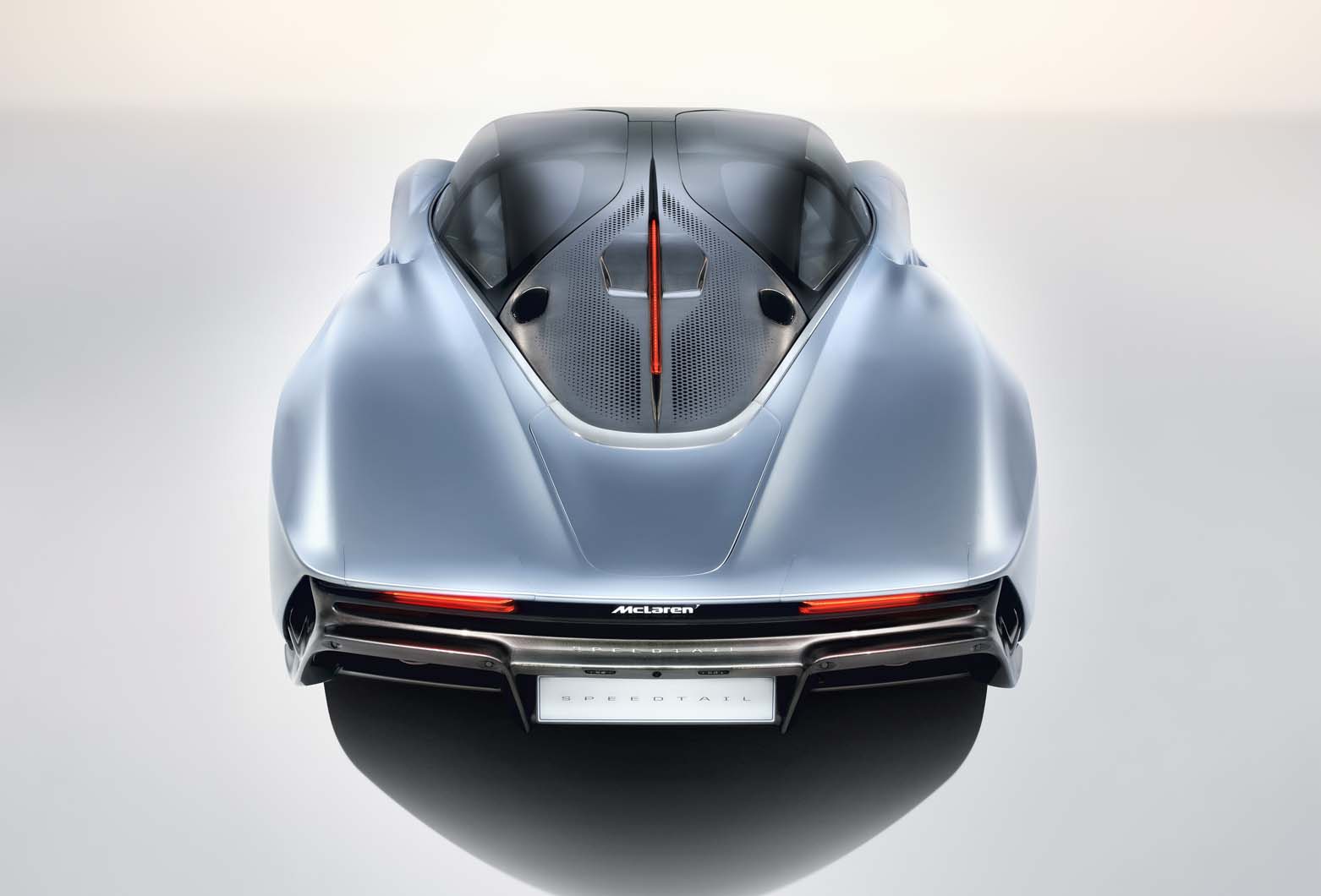 Despite the top speed comparison, Palmer said the Speedtail wasn’t a 21st century version of the F1. “There’s the central driving position and 106-car run, but that’s really where the similarities end,” he said.

“When you look at what that car was in 1992, it’s amazing. But technology has moved on since then with hybrid engines, carbonfibre, tyres and so on, and safety legislation has changed so much as well.”

The Speedtail is built around a bespoke carbonfibre monocoque that, in its lightest form, gives the car a dry weight of 1430kg.

The top speed will be achieved through a special Velocity mode, which will optimise the powertrain to discharge maximum electric power and lower the car’s ride height by 35mm. 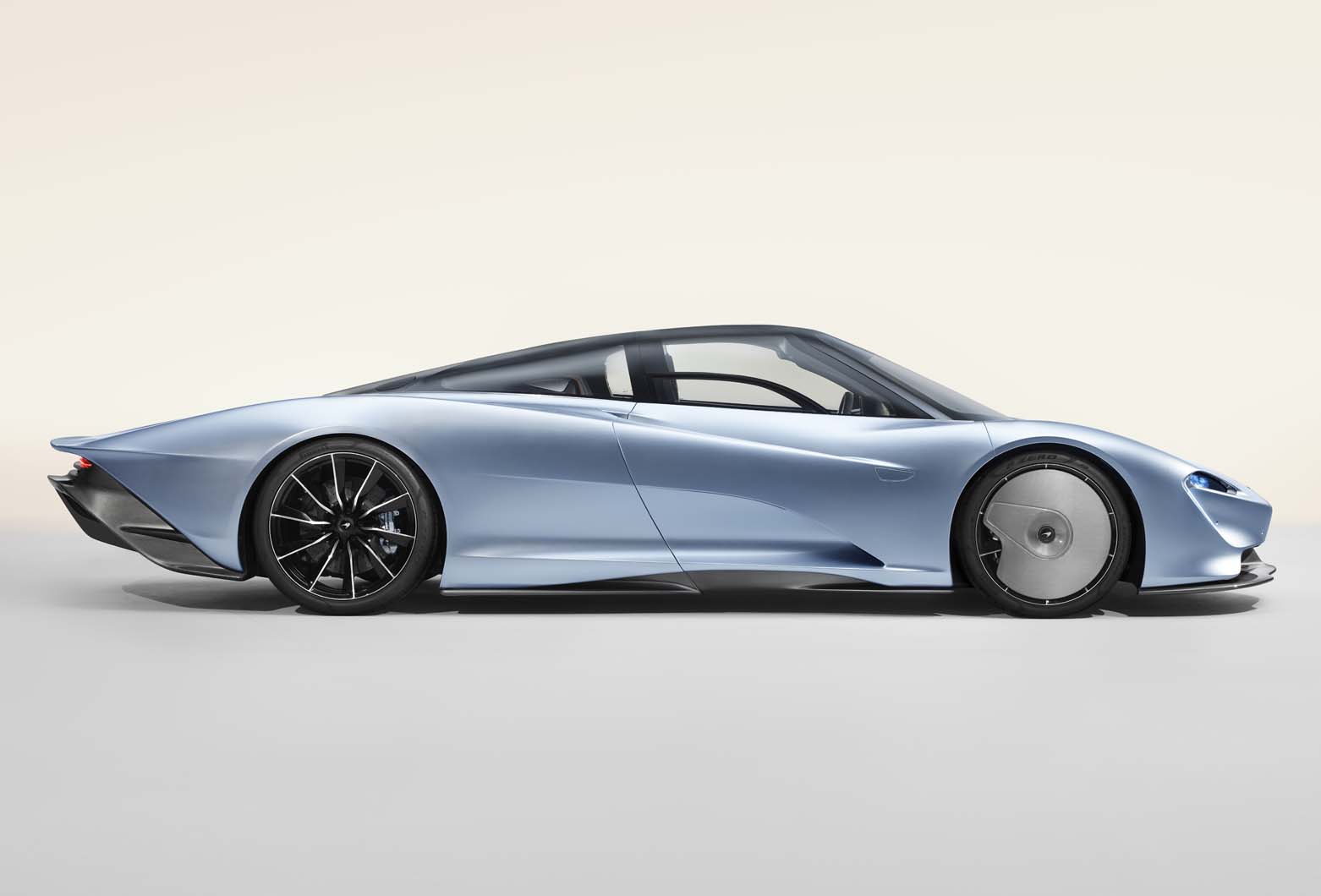 To achieve the speed and acceleration targets, the Speedtail is streamlined to minimise drag for maximum aerodynamic efficiency. Thanks to its eponymous elongated rear end, the Speedtail is 5137mm long, 549mm longer than the P1. That is the only measurement the firm has given, but the Speedtail has a longer wheelbase than other McLaren models and is narrower than a P1 (1946mm).

Unlike the McLaren Senna, which was a high-downforce car intended for optimal lap times, the heavily sculpted bodywork of the Speedtail has been aerodynamically optimised to reduce drag, with a particular focus on airflow.

All of the Speedtail’s body panels are made of carbonfibre and McLaren has minimised their number to limit the need for shutlines and gaps. This has included creating a one-piece rear clamshell that is the largest carbonfibre bodywork element the firm has made. The rear clamshell also features two active rear ailerons, formed of flexible carbonfibre, which are automatically raised and lowered to ensure high stability while minimising drag.

There are also a number of vents that help direct air over, through and under the car, along with a lengthy rear diffuser and flat underfloor. 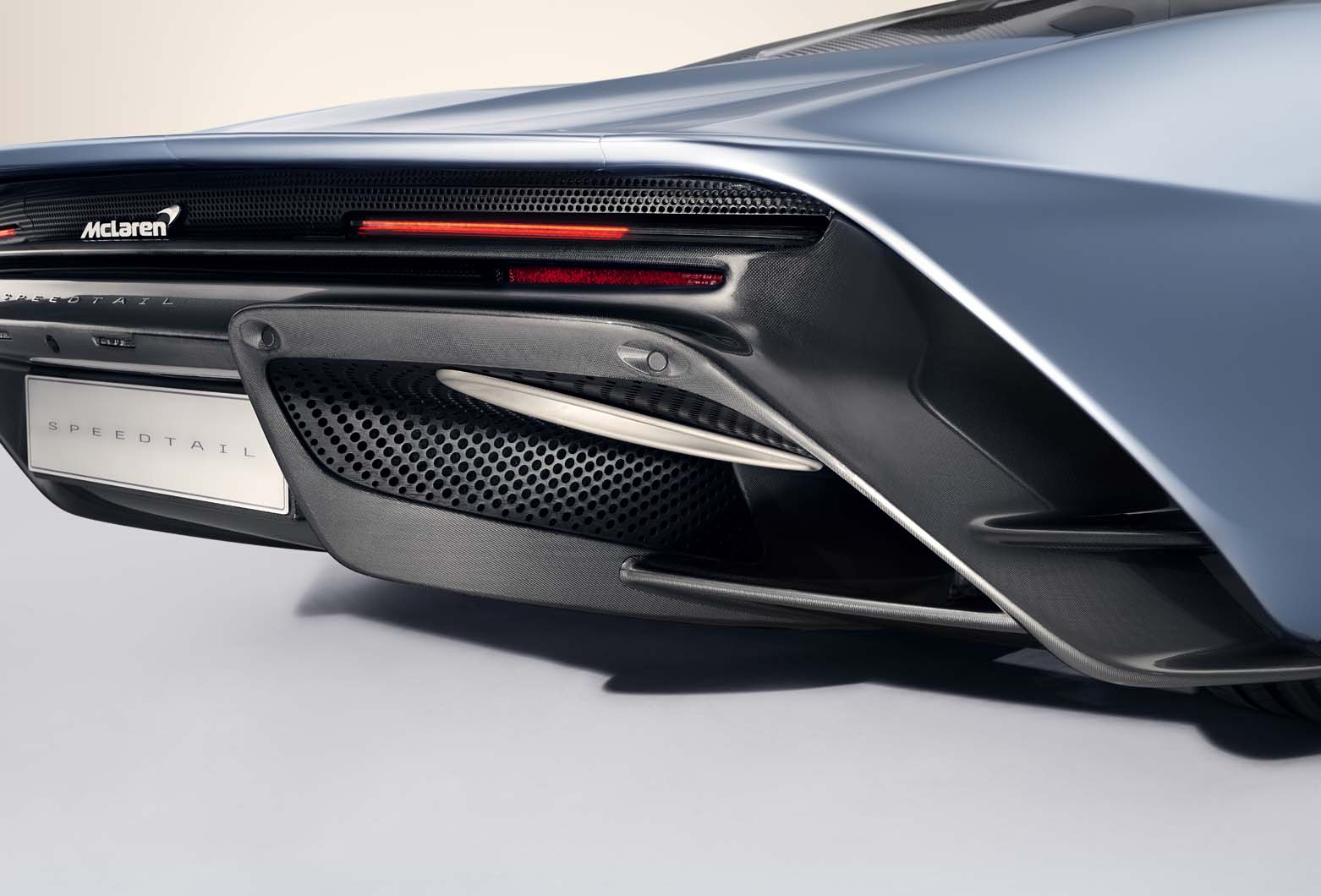 A series of other notable aerodynamic features include fixed front wheel covers and retractable rear-view cameras in place of mirrors.

McLaren has already trialled the central driving position and various aerodynamic elements in a series of test mules, including ‘Albert’ – named after the first F1 test mule – which features a 720S front end with a Speedtail-style rear. Having driven the mule, Palmer said the car will be “breathtaking from a performance perspective”.

He added: “There’s something quite special about sitting in the middle. It’s unique to McLaren. It’s a real driver’s car, like any McLaren should be: a very fast driver’s car.”

The curved glass window is the largest to be used on a McLaren car and features electrochromic glass that can turn opaque, allowing the firm to forgo sun visors. A large glass rear panel is also used in order to maximise the amount of light inside the car. 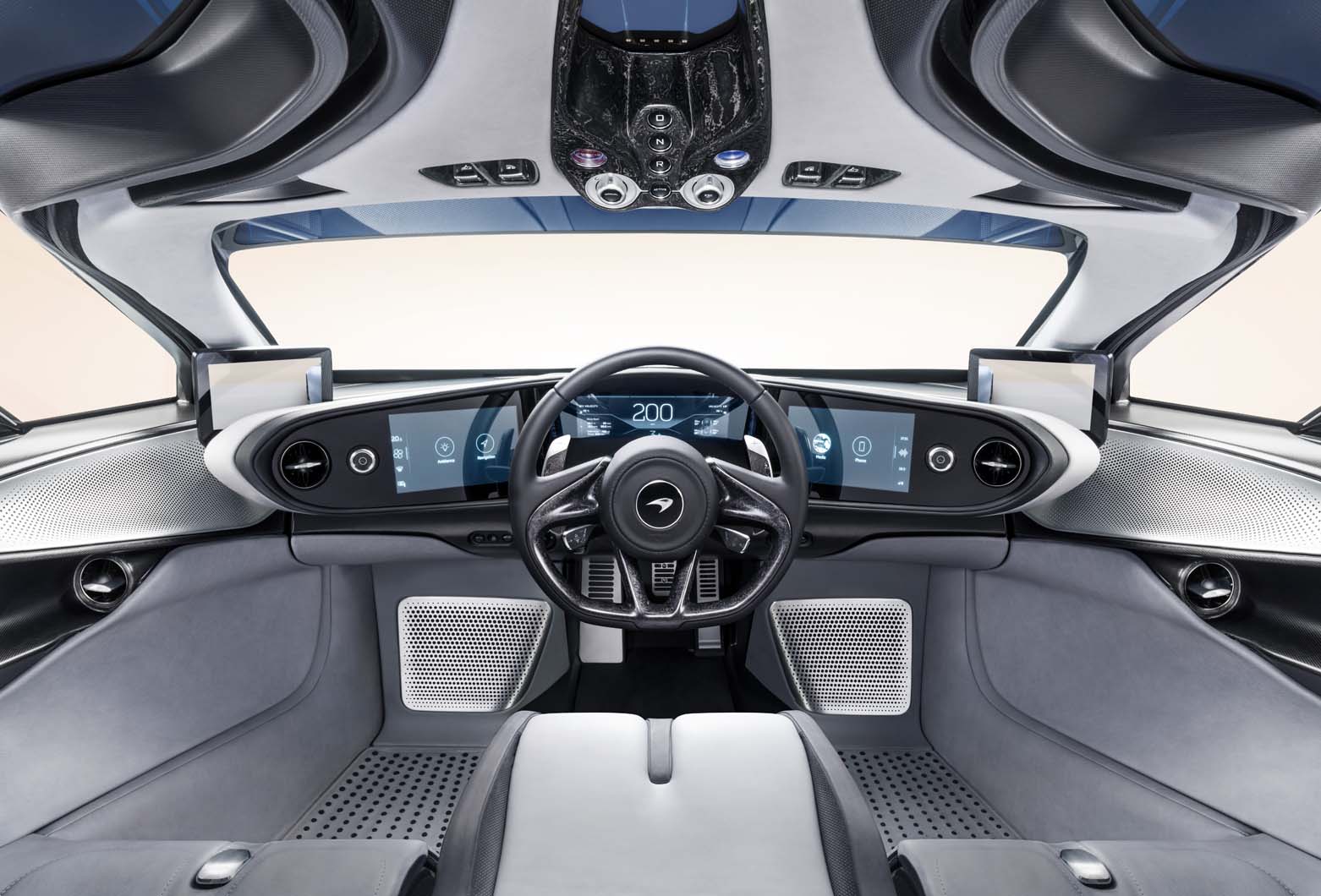 The interior of the Speedtail is accessed through McLaren’s traditional upward-opening doors, which will be mechanically powered for the first time. The two passenger seats are built into the carbonfibre monocoque for stability and to maximise space. On the design model, the Speedtail’s central carbonfibre driver’s seat is covered in lightweight aniline leather.

There are three driver display screens, with climate controls on the left, driving info in the middle and infotainment on the right. There are also two screens for the rear-view cameras. To maximise use of space, many of the controls are located in a panel above the driver’s head.

Because it is produced by McLaren’s Special Operations division, each Speedtail will be customised for its buyer, a process that will begin with each being invited to the McLaren Technology Centre in the coming months. Externally, the use of a new ‘titanium deposition carbonfibre’ weave technique means that a micron-thin layer of titanium – which can be anodised in any colour – can be fused into the bodywork, giving a chrome-effect shimmer. This technique also allows the bodywork to be customised in a way that allows, for example, buyers to write their name or provide an image, symbol or design for the flat floor. Unique stitch patterns and leather colours can be specified inside. 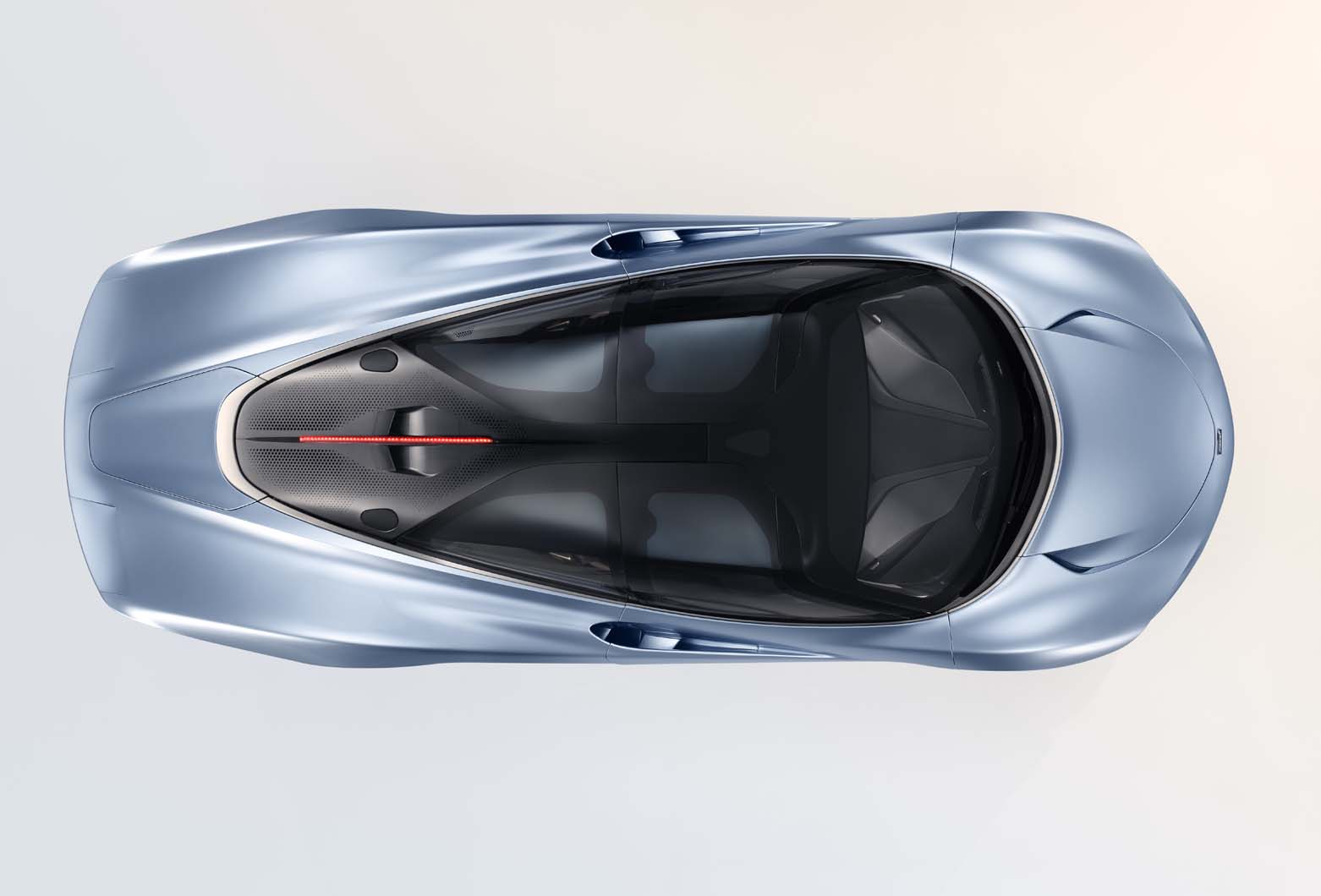 Palmer said that, unlike with other McLaren models, there will be no further variants of the Speedtail, such as a GTR version. However, he said the central driving position could be used on other new McLarens in the future, noting that “it does give a very different driving experience”.

The Speedtail is the first of 18 new cars that will be part of McLaren’s ‘Track 25’ business plan, which runs until 2025. Palmer confirmed that a successor to the P1 hypercar will be one of the final models of that plan.

What was the inspiration for the Speedtail?

“We wanted to make a three-seat hyper-GT. We’ve done the pioneer, the P1. We’ve done the road-legal track car, the Senna. The hyper-GT is the other part of the Ultimate Series vision. GT cars are for the journey, in speed and comfort. How you get to that speed becomes the story.”

How much difference do features like the fixed wheel covers and rear-view cameras make?

“It’s marginal gains. It’s like how an athlete improves their performance, like how you might tuck your elbows in while cycling. Design is a jigsaw; it’s an invisible jigsaw puzzle about how you guide the air around the car. Everything on the car is there for a reason, and the wheel covers, for example, were the best bang for the buck.” 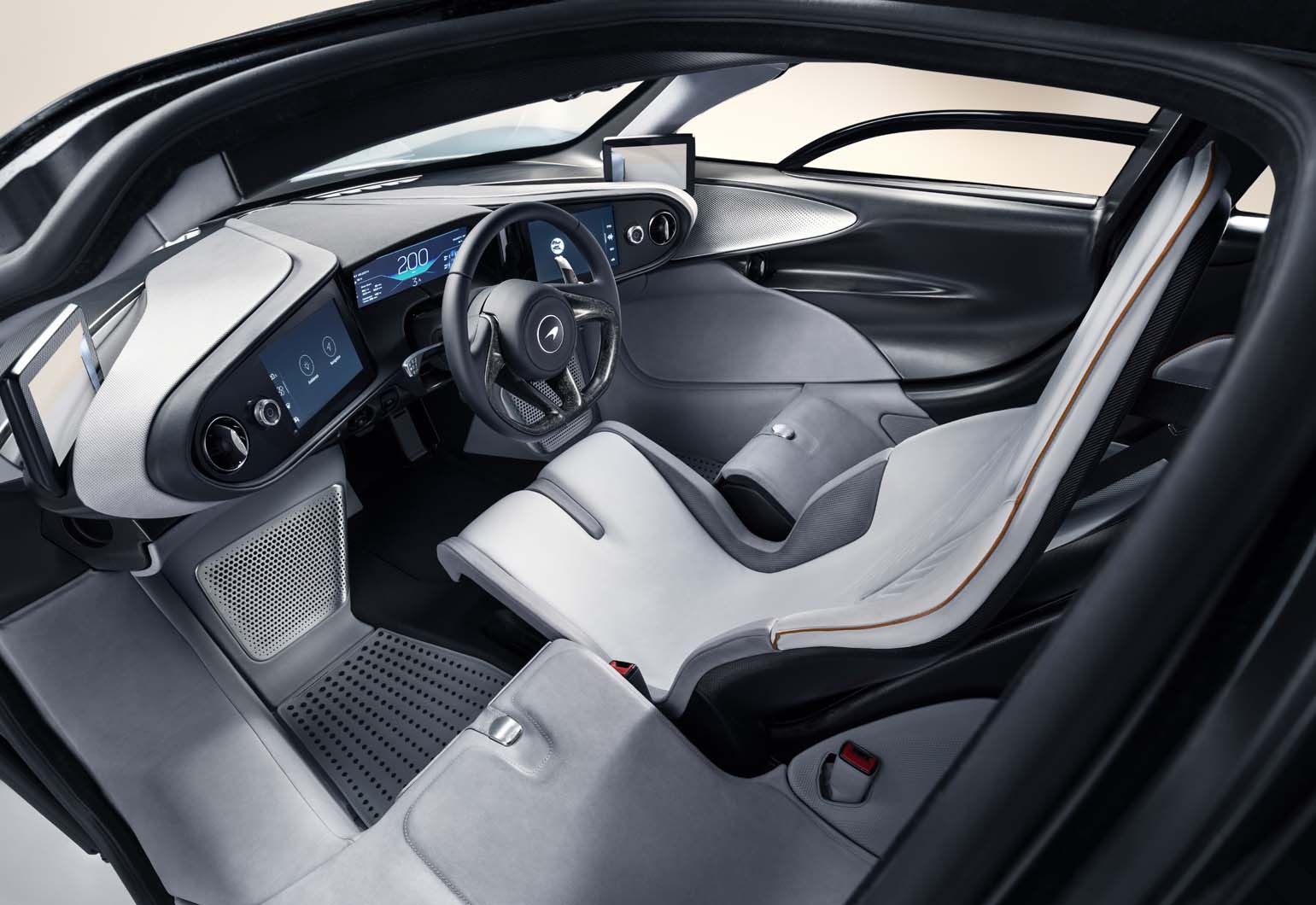 Did you look at the original F1 for inspiration?

“We did, because it was a great benchmark for the interior design and it was the only three-seater we could get our hands on. But everything else was a clean slate.”

How exciting is this project for a designer?

“It’s a dream project. It’s the sort of car you hope will go on a kid’s wall. When the F1 came out, I was 15 and it was one of my dream cars. I had a poster of one on my bedroom wall. So, for me, designing this gives me goose bumps.”

All have already been sold at

All have already been sold at a cost of at least £1.75 million plus taxes each.
(106 models in this case)

I am sick of reading this quote.

I'm not interested in knowing about someone's art collection

I don't have an answer either. I'll stop now.

It has a Petrol Engine, isn't Range important?, how far will a full Tank go?, it's not even mentioned.

Actually it looks like the blue version of the 'new device stuns attacker' just below the main image. McLarens are vulgar. Bring back the Gilburn Invader.