Lamborghini has recreated the long-lost Countach LP 500 concept to mark the 50th anniversary of its headline-hitting appearance at the Geneva motor show.

The 1971 show car gave the first clues as to how Lamborghini would follow up the legendary Miura supercar, with its Gandini-penned wedge silhouette unlike anything that had gone before.

Following its appearance at Geneva, the concept played a role in the three-year development of the production-ready Countach LP 400 before being used for a round of crash tests and scrapped.

Now Lamborghini's Polo Storico historic division has built a faithful LP 500 replica from the ground-up, using period-correct components and with rigorous attention to the detail of the concept's unique construction and dimensions.

Polo Storico even adhered to construction methods used by Lamborghini at the time to ensure complete authenticity, like panel-beating by hand, although it used modern scanning software to analyse photographs of the original concept so as to copy its proportions exactly.

Giuliano Cassataro, the head of Polo Storico, said: "The collection of documents was crucial. There had been so much attention paid to all the details of the car, to their overall consistency and to the technical specifications."

He and his team relied on a wealth of archive material – including sketches, photographs and even meeting notes – as well as the memories of the original car's creators to build the recreation.

It even features the LP 500's unique tubular frame, as opposed to the more advanced set-up that would go into production in 1974, and the same illuminated gauges in the cabin.

The original-specification V12 is present and correct, too, built up using a mixture of spare, restored or completely prefabricated parts.

And perhaps most notably, Lamborghini contracted Pirelli to create a one-off set of 1971-specification Cinturato CN12 tyres, albeit using a more modern compound and structure than available back then.

The paint colour, however, is an exact match for that worn by the LP 500 concept: Giallo Fly Speciale. 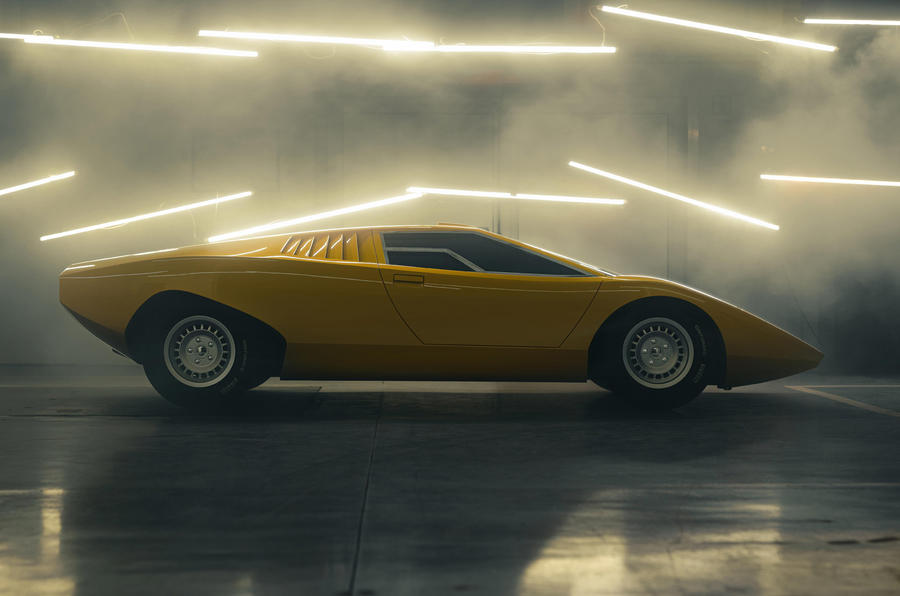 Mitja Borkert, Lamborghini's head of design, was charged with styling the recreation. He explained the painstaking process undertaken by his team: "To arrive at the car that debuted in Geneva in 1971, a 1:1 scale styling model was developed, which along with the car itself was lost over time, but extensive photographic evidence of it remains. This is the same approach with which we decided to tackle the project.

"Starting from publications of the time, from images on homologation sheets and other material recovered from Polo Storico, we were able to reconstruct the mathematics necessary for creating the first 1:1 scale model.

"The biggest challenge was to create the exact volume of the car, and for this we used the opportunity to take a 3D scan of our LP 400 (chassis 001), which was an enormous source of information.

"It took us 2000 hours of work altogether to arrive at the final model with lines that satisfied us. The exact same procedure was followed for the interior.”

Now complete after a total of 25,000 hours of work, the LP 500 will make its public debut this weekend at Italy's Concorso d'Eleganza Villa d'Este.

The irony is that Lamborghini is making the "Countach" (in inverted commas) available to the public again, not this prototype in its stylistic purity, nor the more aggressive and less accomplished production version, but a mish-mash modern interpretation that is part 'homage' part 'retro', which takes the Countach name without making creative use of its stylistic content.

Magnificent! Marcello Gandini was a master of his art, today's designers have completely lost that art, even Pinifarina.

eseaton 1 October 2021
Now that is beautiful.

Give me this over anything they offer today. Not even a moment's hesitation.