BACK TO ALL NEWS
Currently reading: Hyundai ix35 Fuel Cell priced from £53,105
UP NEXT
UK car finance tightened to become 'fairer' for customers

Hyundai announces pricing for its hydrogen fuel cell-powered ix35 SUV, which has officially gone on sale in the UK
Share
Close
Share story

Hyundai has announced pricing for its hydrogen fuel-cell powered ix35, which has officially gone on sale in the UK.

Buyers of the ix35 Fuel Cell, which has been priced at £53,105, benefit from a £15,000 saving thanks to the Hyfive project. The project, a consortium of companies which includes vehicle manufacturers Honda, BMW, Daimler and Toyota as well as Hyundai, aims to bring 110 Hydrogen-powered vehicles to European roads.

As part of the HyFive project, a network of hydrogen filling stations is being established with the aim of providing convenience for early adopters of fuel cell vehicles.

Hyundai’s ix35 Fuel Cell is powered by a 134bhp electric motor and has a top speed of 100mph. The SUV has a range of up to 369 miles and is equipped with two hydrogen storage tanks.

The ix35 Fuel Cell was first introduced on a trial basis in 2013, with nine examples currently in the UK. The model will now be offered for general sale, although it’s likely to remain a niche choice in what remains an emerging market.

Although the regular ix35 will be replaced with the new Tucson this autumn, the ix35 Fuel Cell will remain on sale.

The ix35 Fuel Cell will quickly be joined by rivals, however, with Toyota’s Mirai due to arrive in the UK this summer, priced from around £60,000.

Mercedes-Benz, meanwhile, already offers a fuel-cell version of the current B-Class, although at present it has no plans to bring that model to the UK.

BMW could offer fuel cell tech in its third i-branded model, the i5, while Honda has set a preliminary on-sale date of 2016 for its own FCV, although it has yet to confirm UK sales. 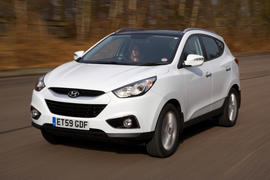 It costs twice as much as a top spec conventionally engined IX35! Great tech but we'll have to wait for the more mainstream car makers like Volkswagen to join for the price to fall in an "affordable" bracket. Given the pace of development at Volkswagen we may have to wait 15 years.
abkq 5 May 2015

Let people buy these without

Let people buy these without attracting criticism. Without early adopters how is new technology supposed to move forward?
Will86 5 May 2015

Where do I fill it up?

I know where my nearest electric charging point is but I've no idea where my nearest hydrogen station is. It's going to take hydrogen a long time to catch up with all electric vehicles and they in turn are a long way off the convenience of petrol cars.
View all comments (6)