Called the Motiv, it has been launched as part of a consortium alongside Delta Motorsport and ItMoves. The single-seat pod is said to provide “significant cost savings and improved refinement” over similar concepts, thanks to Murray’s patented iStream Superlight construction process.

The 2.54m-long, 1.3m-wide Motiv is targeted for use as private city transport or last-mile deliveries and is “ready for immediate adaptation for driverless use”. Featuring a gullwing-style door to enhance accessibility, it can also be adapted to accommodate a wheelchair or a second seat. It will also be available in van-style commercial guise, with more than 1100 litres of load space claimed.

Silverstone-based Delta Motorsport developed the powertrain, which incorporates a 20kW electric motor and a 17.3kWh liquid-cooled battery pack for a range of about 62 miles, a 0-39mph acceleration time of 7.5sec and a top speed of 40mph. The battery can be charged from 20-80% capacity in 40 minutes and will offer 2.5 hours of continuous running time from a full charge.

A 450kg kerb weight is claimed without the battery, allowing the Motiv official quadricycle status. thanks to the extensive use of aluminium chassis, suspension and body components. GMD says this construction method reduces the amount of raw materials needed compared to conventional means of vehicle production and means the Motiv can use a smaller battery pack.

Despite the Motiv’s small stature, it has been designed to offer maximum interior space, with minimal intrusion from the propulsion, braking, suspension and steering systems. A designated workspace, a prominent 24in central display and the lack of a steering wheel show off the vehicle's autonomous potential.

The consortium is looking for autonomous technology development partners to begin real-world trials ahead of mass production in two to five years. It says the Motiv’s “less complex production process” will entail minimal waiting times for customers.

Gordon Murray, chairman of GMD, said: “The best way to make any vehicle commercially viable and cost-effective, while delivering first-class efficiency, is to make it as light as it can be while retaining the highest levels of safety. With the Motiv, we have used our iStream technologies to create ultra-lightweight panels and a body structure that delivers a vehicle that's compact, refined, safe and versatile, while remaining capable of significant range.”

McLaren F1 designer Murray is also developing a revolutionary hypercar for launch later this year. Called the T50, it will make use of ground-effect fan technology to maximise downforce. It's set to enter production at the beginning of 2022.

The Motiv will make its public debut at the Mobility Re-imagined exhibition in London on 11 February. 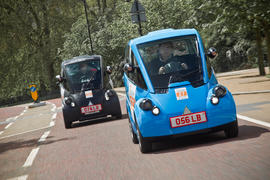 It's going to have to be autonomous, because you're not going to see anything out of those windows.

And yet, there are no visible signs of all the cameras/lidar/radar etc that would be necessary to make it autonomous? I hope they've factored in the weight of all the sensors and computing hardware that would be required into that 450kg...

A pity he couldn't have made

A pity he couldn't have made it better looking. And provide decent-sized windows. And maybe enough room for a weekly shop.

Why is Jeremy Clarkson not credited for his piooneering work. Did he not invent this some years ago? The P45 I believe it was called