BACK TO ALL NEWS
Currently reading: First drive: 2020 Bentley Bentayga prototype
UP NEXT
Aston Martin V12 Vantage to return for swansong in 2022

Autocar’s first experience of the new and heavily revised Bentley Bentayga gives a good impression of the level of disruption the Covid-19 pandemic has inflicted on the very top of the car industry.

We drove the car in South Africa back in early February, with the plan being for it to accompany a story that would coincide with the car’s official unveiling in April. But then the coronocrisis struck, which is why you’re only reading about this story now – and why you’re not seeing masks or social distancing in the pictures.

The Bentayga has been a resounding hit for Bentley, representing 45% of the brand’s global production last year. For much of its life, it had its segment to itself, but the arrival of the Rolls-Royce Cullinan, Lamborghini Urus and (soon) Aston Martin DBX means its case is being sharpened by a sizeable mid-life facelift.

At the front, it gets a broader radiator grille and ‘cut-glass’ elliptical LED headlights inspired by those of the Continental GT and Flying Spur, changes intended to move the car’s visual mass lower. The rear has bigger changes, with a new full-width wrap-around tailgate flanked with oval lights and the numberplate moved downwards. (The outgoing car’s lights were split by a smaller boot aperture.)

Changes in the cabin are less obvious, with many of them intended to improve usability. The most significant difference is the arrival of a larger and higher-resolution 10.9in dashboard touchscreen, which is backed up by smarter and faster hardware that now supports wireless Apple CarPlay integration. As vehicle line director Chris Cole put it as we drove the prototype in South Africa: “We can’t really justify not offering something you can get in a Golf.” Revised seats have also increased passenger space.

Powertrain choice is set to decline in the UK, with confirmation that the familiar W12 engine that powered the Speed version will no longer be offered in Europe, although it will continue in some other territories. In the UK, the new Bentayga will be launched with the 4.0-litre twin-turbo V8, which produces the same 542bhp and 568lb ft as in the outgoing car. A development of the existing plug-in hybrid will follow, powered by a 3.0-litre V6, which the company promises will be the most fuel-efficient Bentley yet.

Other mechanical changes are limited, with the most substantial being a 20mm increase in rear track, intended to improve the linearity of responses between front and rear and accompanied by some subtle tweaking of control system settings. 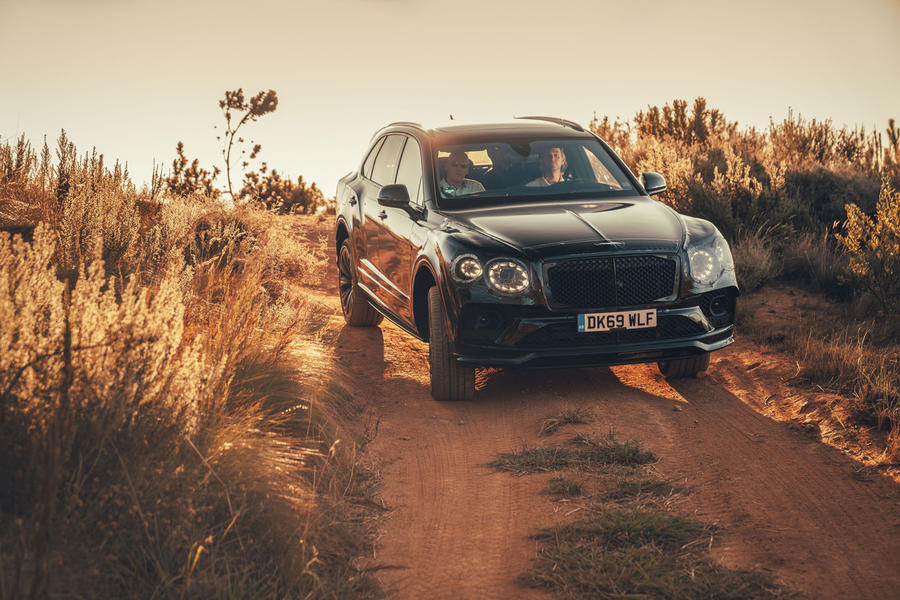 The hard-worked prototype cars in South Africa were a long way from the gleaming models in the official images, wearing lumpy black cladding to disguise their shape (and with fake rear lights looking like those of the pre-facelift car.) The cabins had drop-down fabric screens to cover trim from the risk of passing spy photographers when the cars were stationary, although these could be rolled up when the cars were on the move. They also featured data-logging systems, with the engineering team recording even seemingly insignificant issues to help get the cars ready for launch.

Although some will miss the option of the 6.0-litre W12, the V8 has always felt like a considerably more sensible choice, losing little in terms of performance or character. As before, the 4.0-litre engine’s effortless muscularity remains its defining characteristic, with plentiful low-down torque and lag-free responses making it accomplished at the sort of low-intensity cruising Bentleys are often used for. But proper sound and fury is never far away if you want it, the engine pulling hard and cleanly to the 7000rpm limiter and still snarling nicely at the top end. It still has cylinder deactivation, which shuts down four of them on gentle use to modestly boost economy, but it remains near impossible to discern this happening.

A drive in what is now a 'rest of world' spec W12 mule confirmed that the V8 feels barely slower under all but the most enthusiastic use. To be honest, its loss isn’t a particularly great one. The eight-speed ZF automatic gearbox remains as impressive as ever, with the happy knack of almost always being in the right gear when left to its own devices while also providing snappy changes under manual control.

The chassis revisions haven’t significantly altered the way the Bentayga V8 drives, although the engineers reckon the track increase has slightly reduced steering input. It certainly changes direction well for something of its size and mass, the prototype finding impressive grip from its monster 22in Pirelli P Zeros.

Bentley was first to offer a 48V electric anti-roll system and it still impresses, effectively cancelling out pitch at everyday loadings and only allowing a small amount back as speeds increase. The Bentayga will never feel as sharp as a Urus, but the comfort-orientated ride-handling compromise continues to be very well judged for this part of the market. 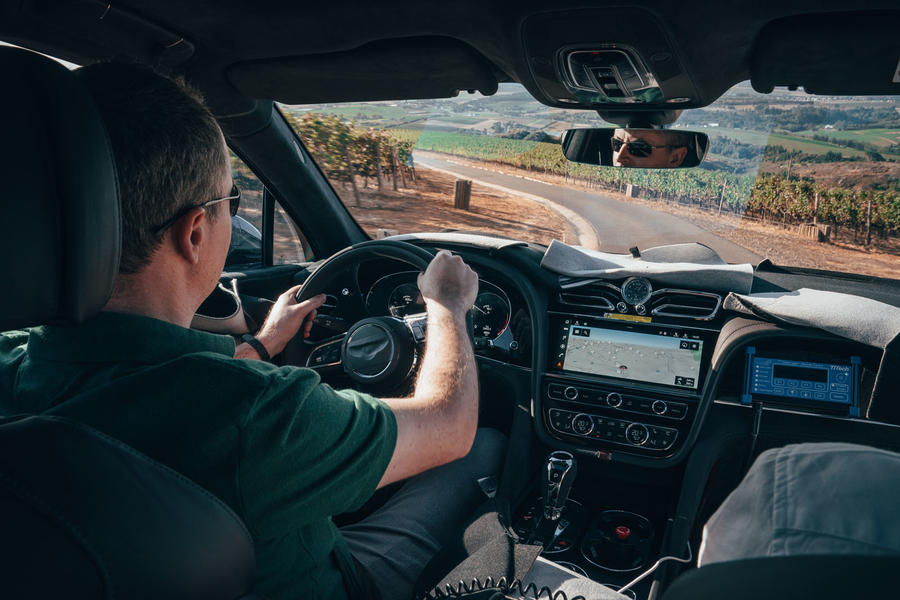 The prototype’s cabin didn’t give us the opportunity to sample the fit and finish of the final car, but it did allow us a chance to test the revised infotainment, which feels like a major step on from the outgoing car’s in terms of looks and intuitive operation. We were also able to experience the improved rear-seat accommodation. As before, buyers can choose between a three-wide bench and a pair of individual rear seats, with a redesigned internal frame increasing leg room by around 30mm with the bench and up to 100mm with the individual seats when reclined, improvements that have come without any obvious downsides.

Customer deliveries will start in the third quarter of the year, and although pricing hasn’t been released yet, we’re not expecting a significant hike over the outgoing V8. The Bentayga was the first car to arrive in its segment and it enjoyed several years without significant competition, but the arrival of the Cullinan, Urus and – more obviously – soon-to-be-launched Aston Martin DBX have made life far tougher. None of is changes are radical, but all should help sharpen the Bentayga’s case. 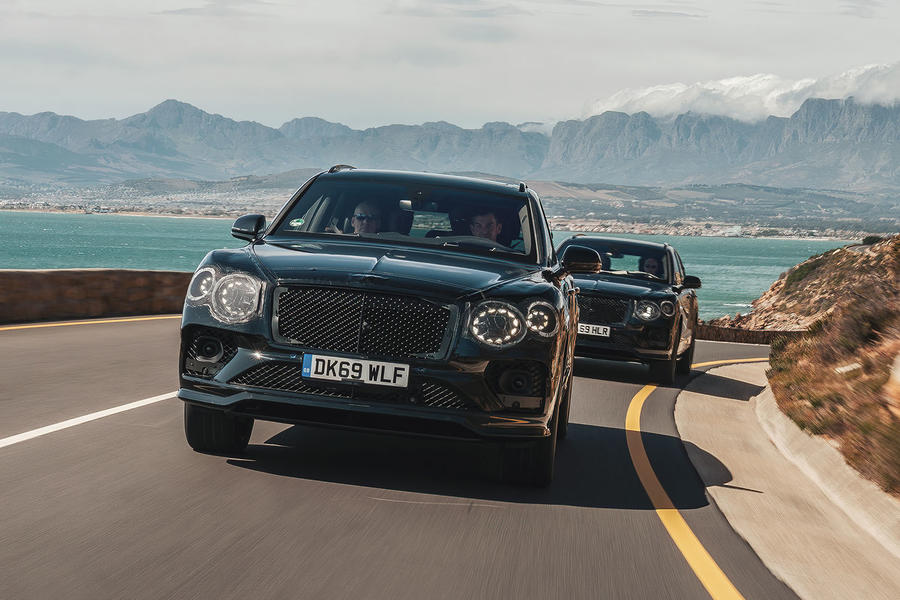 has cost cutting ever been so evident, for the conversion from left to right hand drive, just swap the cup holders for the gear selector and vice versa, they havent even bother giving them a cover, and the dials and steering wheel for the glovebox, and its still ugly.

Just can't get enough of the Bentayga eh Autocar?
Anyway, the undistinguished one in the other article looks pretty darn good.
Like so many many models (think Cayenne) it takes a second attempt to get it right. TBH, it may take a third iteration to get it spot on. Keep going Bentley, nearly there! It's only the customer's money after all. LOL.
View all comments (4)