BACK TO ALL NEWS
Currently reading: Cadillac plots a full-scale European assault
UP NEXT
Mazda to launch own version of new Toyota Yaris by 2023

Cadillac is set to offer a full model line-up in Europe, according to GM president Dan Ammann, including “diesel and right-hand drive”.

Ammann said Cadillac is mulling over a new approach to its European business that will attempt to take advantage of the fact that it is a niche brand by offering “exceptional service”.

Ammann also confirmed that the rumoured new flagship model is on its way. The model will sit above the recently revealed CT6, which competes with the BMW 7 Series and Mercedes-Benz S-Class, and is believed to be a larger saloon. The company is also in the throes of launching a more powerful version of its high-performance CTS-V saloon.

Cadillac currently has a nominal presence in the UK, with one outlet in Surrey. That single dealer sells the ATS, CTS, SRX and Escalade model ranges, but all are left-hand drive only and without diesel options.

However, the brand is trying to rekindle impetus in its home market and establish itself as a business separate from the rest of General Motors before it further asserts itself in the UK.

The high-tech CT6 is the beginning of a regeneration process that is designed to turn today’s slow-selling range into appealing and capable products. 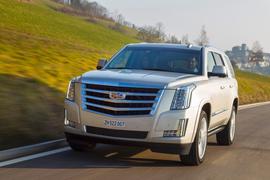 I can dimly remember the 70s as a three-horse race in the premium market - Jag, MB & BMW. I love the styling of all these three cars - XJ series 1, MB W108/109, BMW E3. Some years later, I had the opportunity to be acquainted with all three, and I found the E3 way ahead of the other two in terms of driving dynamics. So BMW's early success was well deserved.
abkq 24 July 2015

Given the enormous difficulties Lexus, Infiniti, Cadillac et al are facing trying to establish themselves in the European market, one begins to wonder how Audi (a relatively latecomer to the premium market) managed to become such a huge commercial success.
289 24 July 2015

Audi used to be a 'blue collar workers' car in Germany.
I was trying to remember when they became cool the other day...they started to be talked about with the Audi 100 3.0 CD thing along with the Vorsprung Durch Technik advertising which was very catchy.
Quattro and Rallying really put them on the map, I guess this was when they became cool.
So, very clever marketing for what is now a VW in a posh skirt.
BMW did even better in its time with the Ultimate Driving Machine strap line in the 80's.
Both Audi and BMW have made a quantum leap 'up-market' - given that in Germany Premium was a class of one (Mercedes-Benz) for years...not counting Porsche

A few months ago Autocar reported that Cadillac will not relaunch in Europe until at least 2020, as it focuses on building its brand and volumes in the US and Asia, according to boss Johann de Nysschen.

Make up your mind, GM. And be prepared to get whooped again.