BACK TO ALL NEWS
Currently reading: BMW diesel for new Auris
UP NEXT
Mercedes-AMG GT Black Series unleashed with 720bhp V8

A BMW diesel will first appear in a Toyota sometime during 2014, insiders have confided to Autocar, probably in the next-generation Toyota Auris. A BMW-powered Auris will be the first tangible evidence of a technology tie-up that will see Toyota share its EV battery technology in exchange for access to BMW’s diesel knowledge.

The highly-competitive BMW diesel will raise the appeal of the Auris, which struggles to make an impact on rivals like the Ford Focus and VW Golf. And the Auris should also benefit from an increased focus on fresh styling and enjoyable driving dynamics, to be prioritised under the Global Vision 2020 Vision plan announced by Toyota boss Akio Toyoda earlier this year.

Toyota’s Global Vision 2020 Vision plan will also give TME much-greater control over the development of the Yaris, Auris and Avensis ranges that it produces in Europe. The facelifted Avensis is the first model influenced by this reorganisation and is also the first to use a new design language featuring a so-called ‘keen look’ front end, the car’s nose now looking more dynamic.

However, BMW has put limits on how far Toyota can go with its diesel engines and has barred Lexus from using the technology. In return, Toyota is understood to have put its hybrid technology off-limits, instead agreeing to share battery technology with BMW.

Toyota and its partner Panasonic have a much-longer history of developing battery technology, including newer lithium ion cells, than BMW.

See all the latest Toyota reviews, news and video 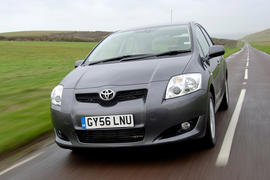