Called Cooperative-Adaptive Cruise Control (CACC) and Land Trace Control (LTC), they bring autonomous driving technology on urban roads and through tight curves a step nearer to show-room reality. Lexus sources suggest that LTC and CACC will be available by 2015 in Japan.

It demonstrated the system in a Lexus IS during the rush-hour Tokyo traffic, after gaining special permission from both a government agency and the local police to use the system on public roads. Autocar travelled in the front passenger seat of the IS and watched the engineer allow the car to steer itself around the tight curves of Tokyo’s elevated motorways.

At the moment, autonomous driving in flowing motorway traffic, on straight sections of road, is a near-production possibility held back only by legislation. The Lexus CAAC and LTC systems allow the driver to remain hands off in anything from stop-start urban traffic to fast-following traffic on sinuous urban motorways of the type that criss-cross the greater Tokyo area.

The CACC system allows low-speed urban autonomous driving by providing car-to-car communication between vehicles, with the following vehicle receiving information on acceleration and braking rates from the vehicle in front. This allows the following vehicle to adjust its speed and braking forced in concert with the car in front, ensuring a safe distance is kept between the two vehicles.

LTC takes autonomous driving a step further forward enabling the car to steer itself around a bend as tight as one with a 50-metre radius and at speeds up to 40mph. The LTC can operate in a straight line at up to 70mph. LTC calculates its position on the road using a ‘millimetre radar’ camera mounted on the nose and a camera mounted at the top of the windscreen. It calculates the course of the road ahead using the car’s navigation system.

Lexus engineers told Autocar that, at the moment, it seems as if a single car-to-car communication protocol is looking unlikely. Even in Japan, at today’s development stage, while Toyota and Mazda are using the same system, Nissan and Honda are using a different system.

However, Japanese car makers are in early discussions to use a common car-to-car protocol. Getting agreement on which frequencies to use across the European and North American markets is expected to take much longer. 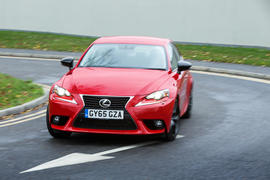 What happens if you're travelling behind an incompetent driver? You're going to be slowing and speeding up constantly in response to their inconsistencies. I don't want a system that is only responsive to the vehicle in front! Advanced drivers are responsive to the hazards visible as far as they can see, and anticipate those beyond. Before such systems as this are developed to such an extent that they can process and respond to information on all potential hazards, they will remain but prototypes. Or they're fitted to every single vehicle on the road. *Gulp*
scotty5 19 November 2013

No wonder it's Lexus who're trialling the technology, one look at that whole facia would be enough to send insomniacs to sleep.
artill 19 November 2013

i can just see the new

i can just see the new advertising slogan. 'The new Lexus, the car no one wants to drive' If you want an autonomous car, get a taxi!
View all comments (6)