The Kia Carens has been subjected to a mid-life refresh, with interior design and tech upgrades in addition to the expected exterior tweaks
Share
Open gallery
Close
Share story

The Kia Carens MPV has been facelifted, with tweaks to the front and rear bumpers, grille and foglights, as well as three new wheel designs in various sizes.

The interior has also been given a refresh, with metallic and gloss-black trim and new seat fabrics, similar to the facelifted Kia Soul, which is also being revealed at the Paris motor show.

In addition to the aesthetic tweaks, Kia has upgraded the technology for the Carens, with a choice either a 7.0in or 8.0in touchscreen infotainment system, which will be available with Apple CarPlay and Android Auto on mid-spec cars and above. Also now available, but likely to be reserved for higher-spec cars, is a reversing camera, and connected TomTom sat-nav.

Kia has also improved the running costs of the Carens, in the form of an Eco Pack that has been added to the 1.7-litre 114bhp version. It reduces CO2 emissions to 109g/km, down from 117g/km on the pre-facelift, standard 1.7-litre diesel model. It’s available only with the manual gearbox in this specification.

This has been achieved, Kia claims, with the installation of low rolling resistance tyres, tweaks to the gear ratios and the adoption of an engine stop-start system. An improvement in the car’s fuel economy figure will likely be announced upon the car’s official launch.

The Carens goes on sale later this year in the UK. A small price increase is expected, so the facelifted model is likely to be priced around £19,000 for the 1.6-litre GDi petrol-engined model in entry-level ‘1’ spec, up from £18,195. 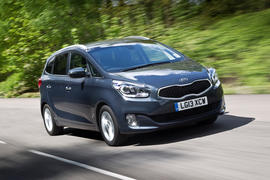 All-new seven-seat MPV completes the renewal of Kia's line-up, but can it claim to be a driver's car like the rival Ford S-Max?