BACK TO ALL NEWS
Currently reading: Zenvo unveils TS1 hypercar at Geneva motor show
UP NEXT
2020 Skoda Enyaq: exterior previewed in official images

Zenvo has taken the covers off the TS1 at this year’s Geneva motor show.

The Danish manufacturer has revised its ST1 model, in the form of the new TS1 (the grey car in the picture above).

It’s not just a letter switcheroo, though, the Zenvo TS1 has a whole new engine along with aerodynamic upgrades.

Powered by a new in-house developed 5.9-litre lightweight twin-supercharged flat-plane V8 engine, which replaces the previous 7.0-litre supercharged and turbocharged V8, the model has a top speed of 233mph. The new engine comes mated to either a seven-speed paddle shift gearbox with auto mode, or a seven-speed race-inspired unit with paddle shift and dog engagement.

Other updates introduced on the TS1 include new lightweight carbonfibre inlet manifolds, a lower centre of gravity, some light cosmetic enhancements and a completely new interior.

Exterior updates include a redesigned front splitter, rear wing and diffuser to optimise downforce. A new vertical wing to the intercooler inlet has been added and the rear bumper and exhaust system have been revised. Carbon-ceramic brakes are also fitted, with 395mm discs up front and 380mm discs to the rear.

On the inside the model gets a contrasting colour separating the driver’s side, an updated dashboard and centre console, plus a range of leather, Alcantara, carbonfibre and aluminium customisation options.

The KW suspension has also been updated, with a hydraulic-lift system.

Zenvo boss Christian Brandt said: “We offer our clients the direct dialogue with our design team in the process of designing every unique interior, providing our clients with the option to become co-creators of their car.”

A track-day concept of the TS1, named TSR, was also revealed at the show (the yellow car). Specifically developed for track day use, it had further improved aerodynamics, with a lower ground clearance and stiffer suspension, as well as a roll cage, bucket seats and six-point harnesses.Just 15 examples of the TS1 will be built. However, pricing has yet to be revealed. The revised model is set to be priced at £1.2million.

Orders are now being taken. 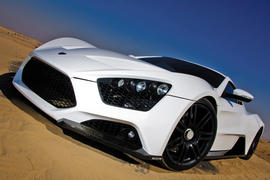 The Zenvo ST1 packs a 1104bhp 7.0-litre V8, and it might be the first car to make Denmark synonymous with supercars