An SUV-shaped rival to electric hatchbacks such as the Nissan Leaf, the Soul EV is available at launch only in highly specced First Edition trim.

That comes as standard with a 10.3in touchscreen infotainment system, full LED headlights, leather seats with electric adjustment for the driver, a heated steering wheel, adaptive cruise control, a head-up display and keyless entry, to name but a few features.

First examples of the car are due to land on British shores during the first few months of 2020.

Alongside an updated design and new technology, the new Soul EV borrows a significantly uprated powertrain from the larger e-Niro crossover.

Its exterior design is an evolutionary step on: the familiar boxy profile from the previous generations remains, but new front and rear-end designs, plus fresh lighting signatures at both ends, mark out the Mk3 model. 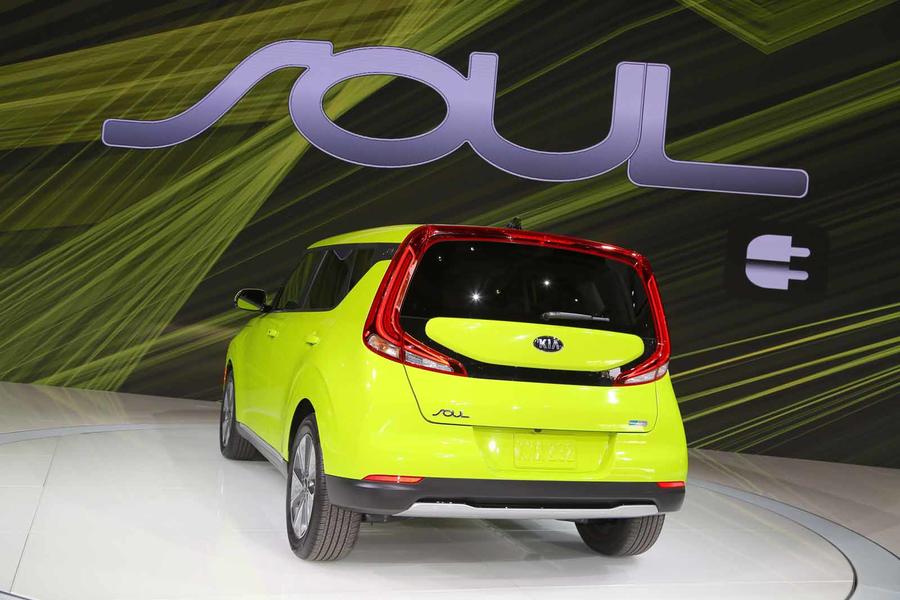 Visual differences from the US-bound petrol-powered Soul include smoother and more aerodynamic upper designs, a blanked-off grille and restyled LED headlights. As with the old Soul EV, it also receives unique five-spoke 17in alloy wheels used for their aerodynamic properties, while the charging port has been integrated into the front bumper.

The 64kWh Soul EV borrows its electric motor and battery pack from the e-Niro, meaning a power output of 201bhp and 295lb ft – 81lb ft more than the outgoing car. Range is a claimed 280 miles from a single charge on the WLTP test cycle.

A less powerful variant, making use of a 39.2kWh battery pack coupled to a 134bhp electric motor, produces 291lb ft and can cover up to 172 miles on a full charge. Energy consumption is rated at 4.29mi/kWh for this standard model, compared with 3.96mi/kWh for the 64kWh.

All Soul EVs are fitted with CCS DC fast-charging capability, meaning both variants can be charged from 20% to 80% capacity in 42 minutes from a 100kW rapid charger.

Unlike the old Soul, all variants make use of new fully independent rear suspension, which is claimed to greatly improve handling and ride. Four driving modes allow the driver to balance maximum power with maximum range, while smart regenerative braking can be adjusted via paddles mounted on the steering wheel. The system can also adjust the amount of regeneration based on a vehicle detected in front of the car.

Inside, the Soul has again been overhauled, with a focus on improving standard equipment and technology. A new 10.3in touchscreen is standard, supporting Apple CarPlay and Android Auto, alongside voice recognition. Gear selection is controlled via a new rotary shifter on the centre console.

Alongside a full suite of active driver assist features, Kia has added a new ‘UVO’ telematics system to the Soul EV, allowing drivers to monitor the car’s status and control various functions via a smartphone app. Buyers can also send a planned route to the car’s sat-nav remotely.

All European versions of the new Soul will be fully electric.

The rear with the coloured

The rear with the coloured panel with the Kia badge in it looks wrong to me, would be better imo if that panel was part of the rear window, so a deeper rear window. Otherwise it seems to be ok, different enough to not be a run of the mill SUV or hatchback.

Kia warranty is 7 years even for EV's and hybrids including their battery. 7 years, upto 100,000 miles. Not misery 3 years.
View all comments (7)