BACK TO ALL NEWS
Currently reading: New Audi Q5, A6, A7 and A8 plug-in hybrids revealed
UP NEXT
Exclusive: Morgan bosses detail ambitious growth plans

Audi brought along four new plug-in hybrid models to this year’s Geneva motor show: the Audi Q5, Audi A6, Audi A7 and Audi A8 TFSI e.

With the e-tron branding now used exclusively for Audi’s electric models, the four new cars are the first of the firm’s new generation of ‘TFSI e’ PHEVs. Each is claimed to be capable of more than 25 miles of electric-only range on the stricter WLTP testing cycle.

The range-topping plug-in, the A8 L 60 TFSI e quattro, features a 3.0-litre V6 petrol engine mated to a synchronous electric motor, a 14.1kWh battery pack and an eight-speed Tiptronic autobox. Combined system output is 443bhp and 516 lb ft, but no performance or economy figures have been quoted yet. 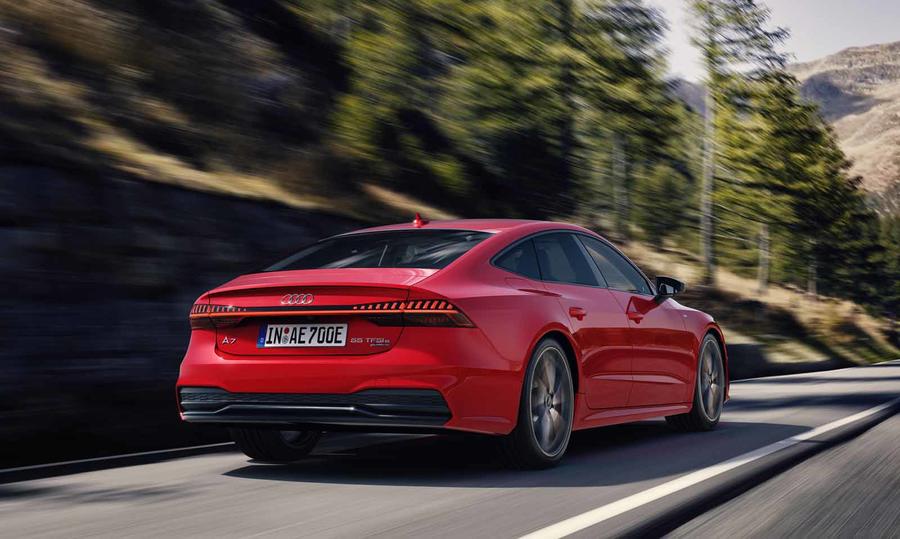 The Q5, A6 and A7 plug-ins all offer identical power outputs of 295bhp and 332 lb ft in entry-level 50 TFSI e ‘comfort’ form. However, a more performance-orientated 55 TFSI e trim level (comparable to S-Line on the regular models) offers 363bhp and 369lb ft. All 55s also get sportier styling and a suspension set-up with a bias towards handling.

Powertrain tech is taken from the e-tron SUV, and Audi claims the regenerative braking system can recover up to 80kW of energy under maximum load. The cars also feature an active throttle pedal with haptic feedback when driving in electric-only mode for greater efficiency, while the coasting function’s effectiveness varies depending on drive mode.

Details of exact UK spec, equipment and pricing are yet to be revealed.

Improved PHEV exec saloon gets a bigger battery but what else does it have to offer?

Its a case across most car

Its a case across most car manufacturers, good electric cars seem to be at a premium level at the moment.

Plug in costs and incentives

If it adds over £2,000 and 300kg to the cost and weight of the car then you're struggle to make a profit on something like the Q2 and A3, especially now that the £1,500'ish gov. bribe has been taken away.   If other tax adavantages get removed then pay back will soon be over 4 years.

Have to agree with the previous comment. Not only are they doing this with expensive models so will sell less of them the range seems a bit poor as well. The newer Mercedes plug in models are getting better ranges than 25 miles, 40 to 50 would make a big difference. This coupled with the charges that Audi are making to plug in at a charging station do make me wonder....