The Volkswagen Sportsvan gives a clear look at the replacement for the Golf Plus, which is due next year
Share
Open gallery
Close
Share story
by

The production version will follow in mid-2014 but won’t use the Golf Plus or Sportsvan names.

The Sportsvan is 134mm longer than the outgoing Golf Plus and 83mm longer than the five-door Golf on which it is based. The wheelbase has also grown 48mm over the Golf’s, and it’s 126mm taller and 80mm wider to boost cabin room.

Boot space rises 74 litres over the old Golf Plus’s to 498 litres. The rear seats split and fold 60:40 and can slide fore and aft by 180mm creating a further 87 litres of room. The front passenger seat can fold forward and flat, creating a load space of up to 2484mm.

Volkswagen says a raft of safety equipment will be offered, including post-collision braking which applies the brakes after a crash to prevent additional impacts and a pre-crash system which tensions seatbelts and closes windows should a collision be imminent. 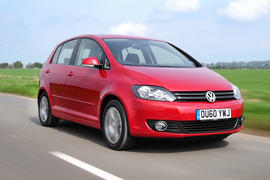 The Volkswagen Golf Plus offers extra space but little in the way of added versatility. Is that enough?

What a silly name!

At least Golf Plus referenced the car it was based on.

I think its probably a good

I think its probably a good idea to have made it slightly bigger than the Golf to differentiate the model a bit more, although its crawling towards Touran territory. I think it looks pretty good, nothing radical of course, but far nicer than the frumpy B-Class.

As a Golf owner I always thought the Golf Plus was pretty awful looking and despite the many 'special' offers from VW to shift them, was happy to fork out thousands more for the hatch.

This concept is the first MPV, sportsvan or whatever it's called that I'd prefer than the hatch.

Really odd proportions, and the clean simplicity of the oh so boring Golf seems to be missing. It looks like a shunted next generation Touran and reminds me a lot of that Demios thing Mazda produced.

Much better attempt at a compact mpv than the previous effort. Now looks like a proper competitor to other 5 seaters like the C-Max and C4 Picasso. Will be overpriced and under-equipped though.

sportsvan must be the biggest

sportsvan must be the biggest oxymoron ever

The Golf Plus never made a lot of sense as it was just a 5% fatter Golf. Whereas the Touran was the full miniMPV. So This is the result: the VW equivalent of the 5-seat C-Max. Much better idea IMHO, especially as the Golf seems a trifle under-booted as a full family auto...

The previous Golf Plus was nothing more that a high riding Golf with barely any more space or flexibility than the regular hatch. This new model appears to be more of a conventional MPV, although it could even be seen as a much more flexible Golf without the full-on MPV features of the Touran, almost as if it's the Golf's take on BMW's 3 and 5-Series GT concepts.