BACK TO ALL NEWS
Currently reading: The ultimate Christmas toy: Off-road in the Fat Truck
UP NEXT
New Range Rover PHEV brings 70-mile EV range for £103,485

The ultimate Christmas toy: Off-road in the Fat Truck

"I really hope he has shut his door properly.”

In what has been a strange day, it’s an incongruous thought as a giant red off-roader plunges down a steep bank and towards a lake. Surely a damp interior would be the least of the driver’s worries as he enters completely unknown waters.

Two swans are paddling idly by, clueless that their world is about to be rudely interrupted. The water is a long way over the bottom edge of the door, the rear tyres are a foot off the deck and still the machine carries on, edging slowly down the bank until all four wheels are in the water.

For a moment, it just bobs on the surface, like a massive rubber duck. But then its wheels start to power up and it’s off, with the tyres providing the thrust, slapping the water like a modern-day paddle steamer.

This, then, is one of the world’s greatest toys or most impressive search-and-rescue machines, depending on your point of view. It’s called the Fat Truck – no point beating about the bush with a fancy naming strategy – and it’s designed to be the next great thing in getting to places where machines have no right to be. 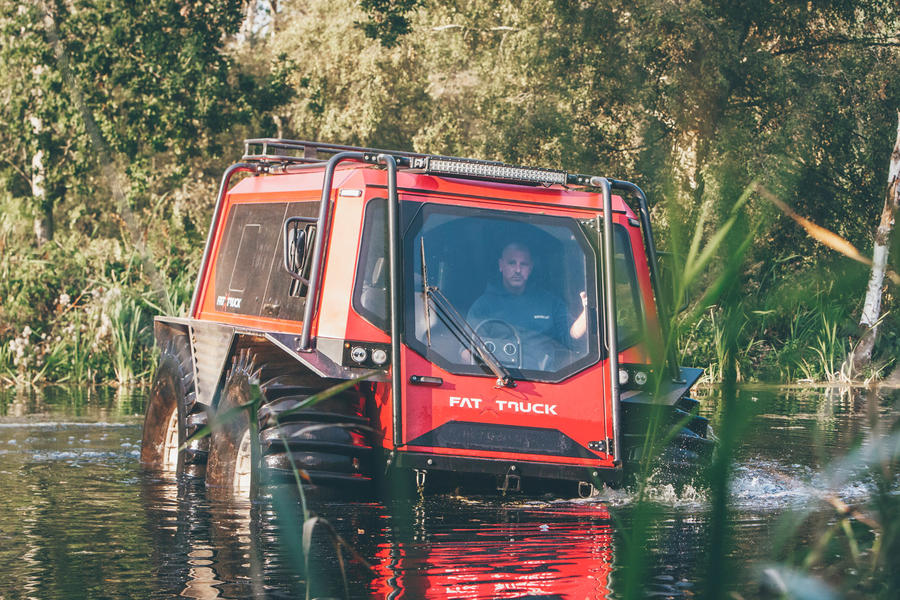 Built by a Canadian company called Zeal Motor in Bromont, Quebec, it’s now being imported into the UK by Off-Piste Agri and is set to revolutionise search-and-rescue operations here. Fire departments are interested in it, as are wind energy firms, because the Fat Truck will allow them to get to where they need to be, no matter what terrain stands in the way.

Shorter than the Volkswagen Polo yet nearly three metres high and with 1640/640 R24 tyres, the Fat Truck is one of the most single-minded vehicles on the planet. Everything about it is designed to allow people to operate it in extreme conditions with absolute ease. To that end, there’s no clutch. If it had one of those, there’s a danger it would burn out on some of the slow ascents and descents that are required.

Instead, it operates on a hydrostatic system, with a 2.2-litre Caterpillar diesel engine producing just 67bhp and 153lb ft and sending that via two pumps to a pair of toothed belts, one driving each side, with 10 forward and 10 reverse gears in both a high and low set-up (future models will be simplified and offer only four ratios in each direction).

That might not sound like a recipe for extreme off-roading (I had visions of tiny cambelts trying to turn those massive tyres), but each belt is made of carbonfibre and is two inches wide; and thanks to that set-up, the Fat Truck can literally turn on a sixpence. 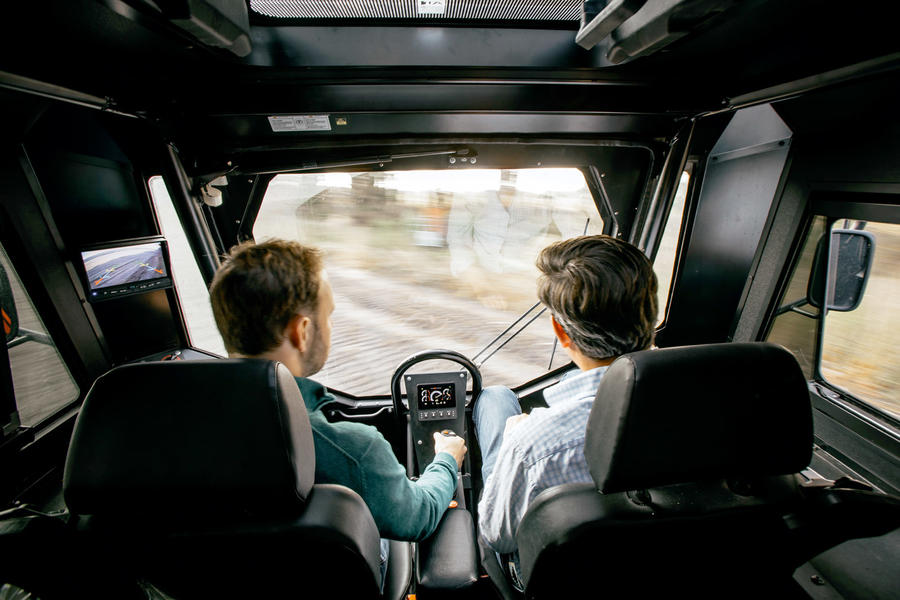 The Fat Truck is controlled by a simple joystick in the middle of the cab (the passenger compartment will seat six) and an equally idiot-proof series of buttons on a control pad that allows you to cycle through functions, such as selecting which terrain you are running on – snow, mud, trail or water. Crucially, all these are controllable no matter what size gloves you are wearing – a vital characteristic in a Canadian winter. Two bodystyles are available: this crew cab and a pick-up with a one-tonne payload. In terms of weight, the pick-up is 2.3 tonnes, whereas ours is 2.7 tonnes. The maximum speed is 25mph on land, 3mph in water.

One party trick is the on-board compressor, used to pump the tyres up from a low of just 0.5psi to a maximum of 4psi. It can do this on the fly and is constantly adjusting itself depending on the terrain. Plus, in contrast to something like the Sherp (a similar-looking contraption built in Ukraine), the Fat Truck uses air to do so, not exhaust gases.

The first time it climbs a bank, the tyres’ sidewalls flex and the compressor whirrs away, keeping everything on an even keel. The amount of give in those massive tyres is incredible. Like a slow-motion video of a Top Fuel dragster, it looks like the rubber is constantly trying to peel itself away from the metal wheel.

In light of those short front and rear overhangs, it won’t come as a surprise to learn that ascent and descent angles aren’t an issue. The maximum uphill/downhill is 35deg and sidehill is 22deg. The former is about the same as a very steep black run on a ski slope. In other words, not something you would want to walk up. 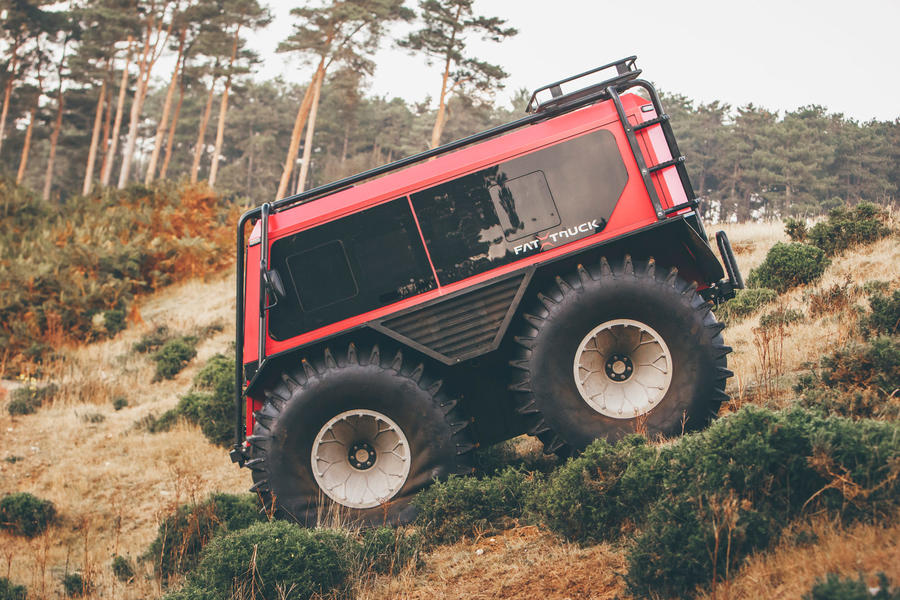 Yet for all its capability, the Fat Truck is a remarkably simple thing to operate. Turn a key, be deafened by the noise of the Caterpillar diesel (it’s mid-mounted, just behind where you sit, and no amount of noise insulation is going to soften those dulcet tones) and you’re ready to go.

As I said, it’s operated by a simple joystick; there are no pedals. Cycle through a handbrake-release procedure by rotating a button below the control pad, press and hold a dead man’s switch on the front of the joystick (fighter jet machine gun style), push the stick all the way forwards and you’re off.

It’s exceptionally smooth and civilised (offset by the deafening engine), but the trick to controlling it is to keep the joystick pinned all the way forward for maximum revs and change the speed by using the gears. These are controlled by two simple buttons on the top of the stick – one for up, one for down.

That method of modulation feels fine for accelerating, but it’s counterintuitive when you’re coming back down – or at least it felt so to this particular ham-fisted journalist. Wanting to slow down, I eased back on the throttle and tried to steer at the same time, and the Fat Truck didn’t like that at all, kicking and bucking like a bad-tempered stallion.

Poor photographer Max Edleston wasn’t holding on quite tight enough and cracked his head on the roll bar. Still, no claret was spilled, and the Fat Truck has a literal hose-down interior, so there were no worries about making a mess anyway.

Barring this minor accident, it was remarkable how easy I found it to operate the Fat Truck. It’s the sort of thing that you can imagine having a couple of hours training on and then heading off for an afternoon picnic atop Mont Blanc. 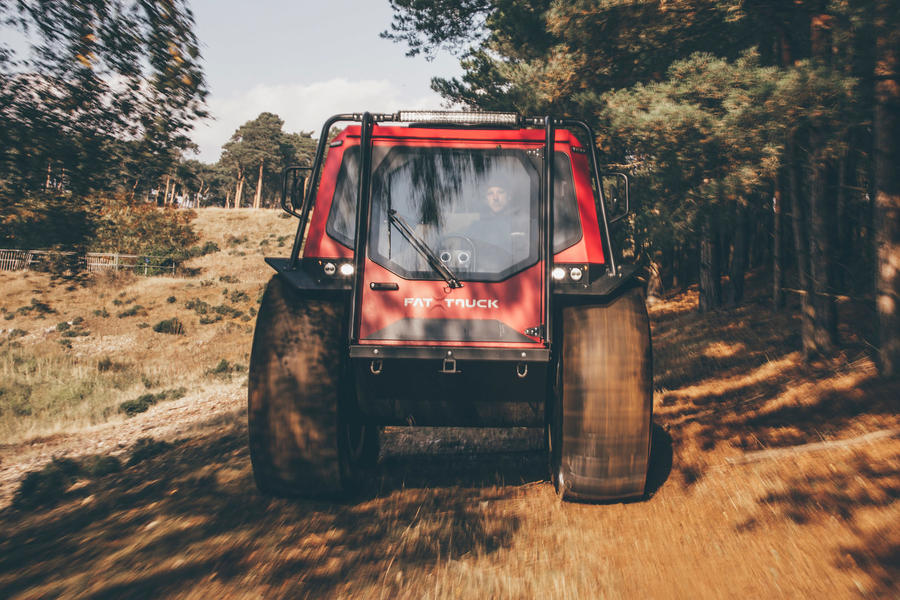 It’s also surprisingly comfortable at low speed. The balloon tyres are its suspension, and they’re running at such a low pressure that it glides across rough land. Or at least it does until the speed picks up; thanks to that ultra-short wheelbase, it starts to bounce around as the pace increases.

I probably felt more unnerved than I needed to be, but sitting in the cab as trees and branches flashed past, with a hefty amount of vertical movement and a drop to one side, I was glad it was the demonstration driver in charge instead of me for this particular section.

Despite all the ease of use, though, the Fat Truck’s capability is what will stay in my memory. At one point, our man demonstrated how well it holds on a steep muddy slope. The tyres give so much grip and the Fat Truck is so inherently stable that it felt as secure as if it were on flat Tarmac. But its real party piece comes next: thanks to the control of the gearbox and hydrostatic system, it will creep down a 35deg slope at millimetres per hour. In extreme conditions, that could be the difference between an escape and a massive shunt.

And that’s where it’s so impressive: in its ruthless fitness for purpose, albeit wrapped up in a cartoon-like appearance. Search-and-rescue teams risk their lives in what they do, so if this machine is able to reduce that peril, all hail the Fat Truck. Rarely has anything so serious looked so comedic.

Other ways of getting rescued in style

ZIL 4906 'Blue Bird': Used by the Russians to help rescue Soyuz low-earth-orbit carrier rockets when they splash down in water, the Blue Bird is a six-wheeled amphibious vehicle. Using a screw propeller to power through water, it can be either a cargo carrier (with a crane) or personnel transport able to take 10. 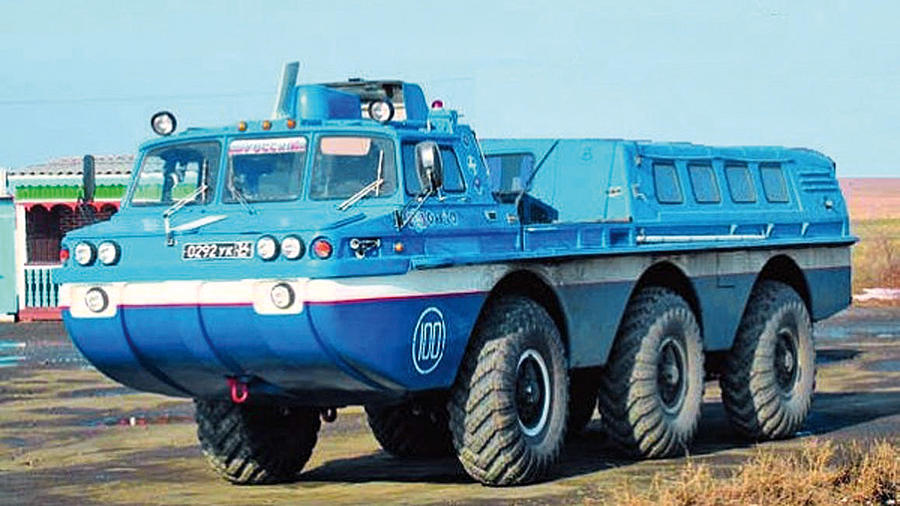 Hagglunds Bandvagn 206: More commonly known by its maker’s name, the Bandvagn comprises two cabin units driven by powered tracks. Capable of carrying up to 17 people and also amphibious, its adaptability is key to its ubiquity across various countries’ armies. It can even be underslung and airlifted by a Chinook helicopter. 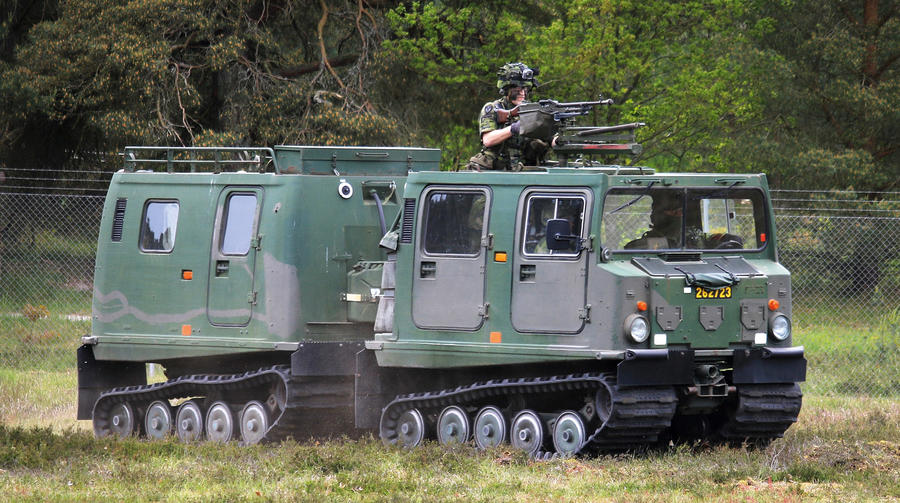 St Bernard: Used by the monks of Switzerland’s Great St Bernard Hospice since the 1600s, this breed of dog has been credited with saving more than 2000 lives – including one named Barry who rescued more than 40 people. Sadly for us romantics, the monks now favour helicopters to find stranded walkers. 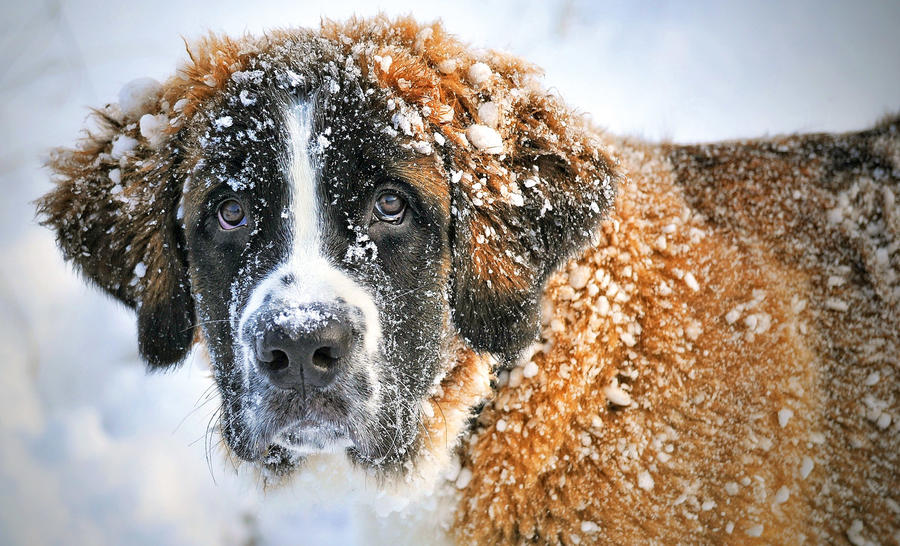 Shannon Launch And Recovery System: The RNLI’s incredible beach-launcher can haul an 18-tonne Shannon-class lifeboat at 10mph over beaches where launching would else be impossible. Thanks to its hydraulically rotating and tilting lander, a boat can be rescued and relaunched in just 10 minutes.

Blatant copy of the russian Sherp.

Yeah, I've seen this a few years back, can't think which car show it was on though?