BACK TO ALL NEWS
Currently reading: Beyond hypermiling: How two Renault Zoes busted range anxiety
UP NEXT
EV start-up Aehra to launch “ultra-premium” SUV and saloons

Earlier this month, a Renault Zoe E-Tech R135 EV 50kWh GT Line without any modifications to its factory specification set a new record by travelling almost 425 miles on a single charge – 180 miles further than its official WLTP range. That should silence EV range worriers, except that it did so at an average speed of just 19mph around a race circuit and with none of its comfort features switched on. Even when day turned to night, the Zoe’s headlights remained off, the team of six drivers relying on night vision goggles, the car’s daytime running lights and fluorescent track markers to guide them.

So, gentle laps of a closed circuit in a Zoe whose driver is near blind, freezing at night and boiling during the day. What was the point? Well, setting that new record for a start. It trumped the one set in 2018 by French journalist Pierre Desjardins driving a Zoe R110 with a smaller 40kWh battery. He coaxed his car to 351 miles, 165 miles further than its official WLTP range. Remarkably, he did so on Paris’s Périphérique, although he was able to slipstream traffic and the ambient temperature was a battery-friendly 35deg C.

Still, congratulations to Desjardins but also to the six British drivers and their support crew who, despite the privations, guided their Zoe E-Tech R135 EV 50kWh GT Line around Thruxton for over 24 hours and into the record books. In fact, they drove two Zoes, the second an identical model but shod with a new design of low rolling resistance tyre made by Enso. Thanks to its special boots, this Zoe travelled no less than 475.4 miles, returning 10.5 miles per kilowatt hour compared with 9.1 miles from the standard Michelin Primacy-wearing car, and 7.9 miles from Desjardins’ Zoe.

Endurance tests like these hinge on the quality of the people doing them and at Thruxton there was no shortage of fine folk. The record attempt was organised by Mission Motorsport, the armed services motorsport charity. All but one of the six drivers were forces veterans while the sixth, Kevin Booker, is an EV fleet manager with a passion for hypermiling, the term for wringing every last drop of range from a car. 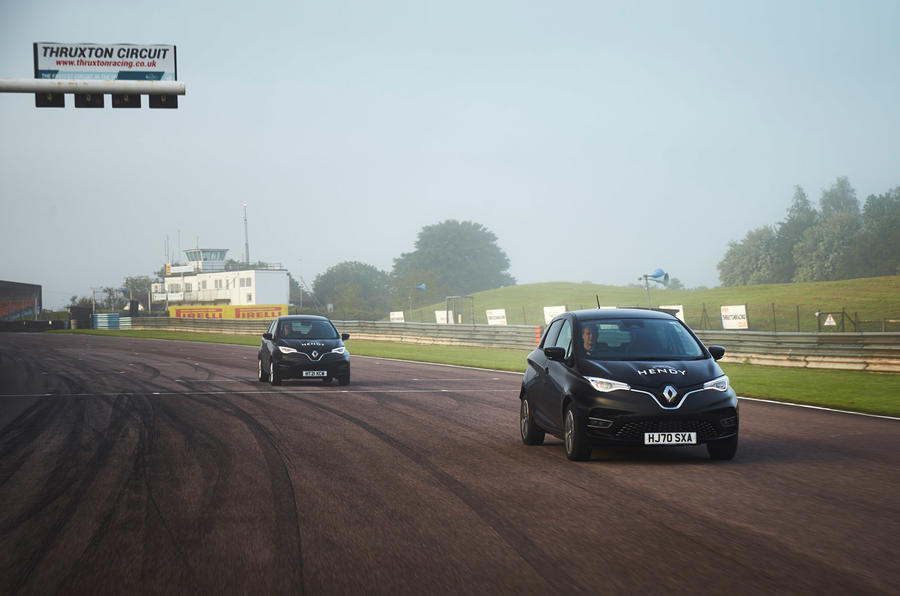 They’d first set off, each driver doing a 20-mile stint, at sunrise 0452. To keep their batteries warm, the cars had overnighted in the Thruxton Centre restaurant but it was foggy and only 7deg C so, with the fast-chilling batteries underperforming, the attempt was called off after 52 miles and the batteries recharged for a 0940 restart.

“No plan survives first contact,” James Cameron, founder and CEO of Mission Motorsport, declared in true military fashion. It’s why the team had been practising for two whole weeks ahead of the record attempt, refining their hypermiling techniques (they drove in bare feet, using their toes to feather the accelerator) under the watchful gaze of Booker. “I know it so well now that I could drive around the 2.4-mile circuit in the dark, in my sleep and blindfolded,” he told me.

By 0633 on the second day they’d broken Desjardins’ record in the standard Zoe. Tristan Dover, formerly of the Queen’s Royal Lancashire Regiment, was its driver. “You can’t switch your brain off. All the time you’re learning to read the track and finding gentler gradients. I got a lump in my throat breaking the record.”

By 0830, the standard Zoe had 5% battery range remaining and its Enso-shod compatriot, 13%, but still they kept going. In fact, they carried on into the late morning before, one after the other, gliding to a stop. “The only time I felt range anxiety was when I thought we wouldn’t crack 450 miles,” said Booker. Remember that the next time you’re worrying about driving your EV to the shops.

The most affordable second-hand EVs

Inside the industry: positive motoring trends of the past 18 months

In the last 500 miles over the last few weeks my car computer says I've averaged 20mph .... in my Zoe

Thats town, country lanes and a bit of motorway .... very much normal traffic that was irrespective of the car I was in

So while this hypermiling race track test at 20mph was an experimental construction ..... getting 9.5 miles per kWh..... my real life averaged the same getting was 4.2 miles per kWh... with all my acceleration and braking .... without any specific economic driving

So an interesting test ..... at one extreme of driving fir economy  .... but actually relaing to real life average speed ....

I reckon I could get 10 to 20% better economy if I accelerated much more gently .... but the torque to get ahead off the lights is part if the fun of driving an EV

So, what about the People who drive to earn there living, self employed, the reps, the endless amount of Van drivers, now some of them must do 30,40, even 50,000 miles a Year, how, in the future, is EV power going to make there lives easier, cheaper,and still get stuff delivered on time?

I notice that when people talk about the speed of filling up with petrol/diesel they never mention the cost: 80 quid to fill up my Dad's diesel XF the other day! He will be switching to an iPace and home charging ASAP.

More and more EVs will be fitted with heat pumps which make a huge difference to efficiency in the winter. So worrying about having the heater on will be a thing of the past.

As for the 'fantasy' of onward journeys with EVs, maybe somebody who actually owns and has used an EV for a longer journey can comment. I want to hear from people with real world experience of an EV, not from someone who's never even sat in one.

Anyway we can kick these issues around all night, the bottom line is we're going to move rapidly towards a fully electrified future whether people like it or not, so people may as well accept this and embrace the advantages.