BACK TO ALL NEWS
Currently reading: Solar power for Ford C-Max hybrid concept
UP NEXT
How the Bugatti Chiron became the first 300mph road car

Ford is to unveil a solar powered version of the Ford C-Max plug-in hybrid at the CES show next week.

The Ford C-Max Solar Energi Concept uses a solar panel on the roof which is said to act like a magnifying glass. Ford claims it takes a day’s sunlight to deliver the same performance as the standard C-Max Energi PHEV.

The car's solar panels have been supplied by Ford’s solar technology partner, SunPower, with the Fresnel-type 'concentrator' lens developed by the Georgia Institute of Technology. The Fresnel lens, which features concentric arrangements of tiny prisms to track the sun's rays, acts like a thin magnifying glass.

Ford says eight kilowatts can be generated through the system, equal to a four-hour battery charge.

The C-Max Solar Energi is estimated to reduced the standard Energi’s annual emissions by around four tonnes for a typical owner. A range of 620 miles, with a 21-mile EV-only range, is possible and the car retains the ability to plug in to an electrical socket.

Research by Ford says the sun could power up to 75 per cent of all trips made by the average driver in a solar electric vehicle, and suggests the technology could be particularly viable in areas with underdeveloped or unreliable electricity infrastructure.

Ford’s electrification boss Mike Tinskey said: “Ford C-MAX Solar Energi Concept shines a new light on electric transportation and renewable energy. As an innovation leader, we want to further the public dialogue about the art of the possible in moving the world towards a cleaner future.”

The car will be shown at the Consumer Electronics Show in Las Vegas, after which it will undergo testing to determine feasibility for a production model. 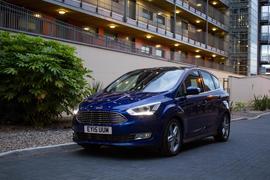 SunPower solar looks to be an

SunPower solar looks to be an excellent idea, and in the UK at least, we have very little snow to cover up a rooftop cell assembly.

On a design note, does Ford really feel that a stack of three grilles is necessary? First there's the top strip carrying the company logo, under which is the big Aston-Martin lookalike mouth, and below that a wide chin intake.

How about ditching the top strip at least?

You can't replace the power structure with solar cells!

It's not practical. To many days without sun. In winter time, there come days with snow on the roofs or ice or both.

Doubtful that energy storage would suffice to tide over. Backup generation would hence be necessary. Internal combustion engines would be the most probable backup power source.

If only they listen. Just kidding

I've been suggesting car makers make use of the waste of space that is roof and same goes for the house-builders. I really am at a loss why this freely available source is being ignored. The money it takes to fit solar panels in every house is a fraction of the money that's spent on building power houses and the supply infrastructure. Fitting each building with low maintenance solar cells will probably cost less than maintaining our monolithic power structure. Never mind.
View all comments (4)